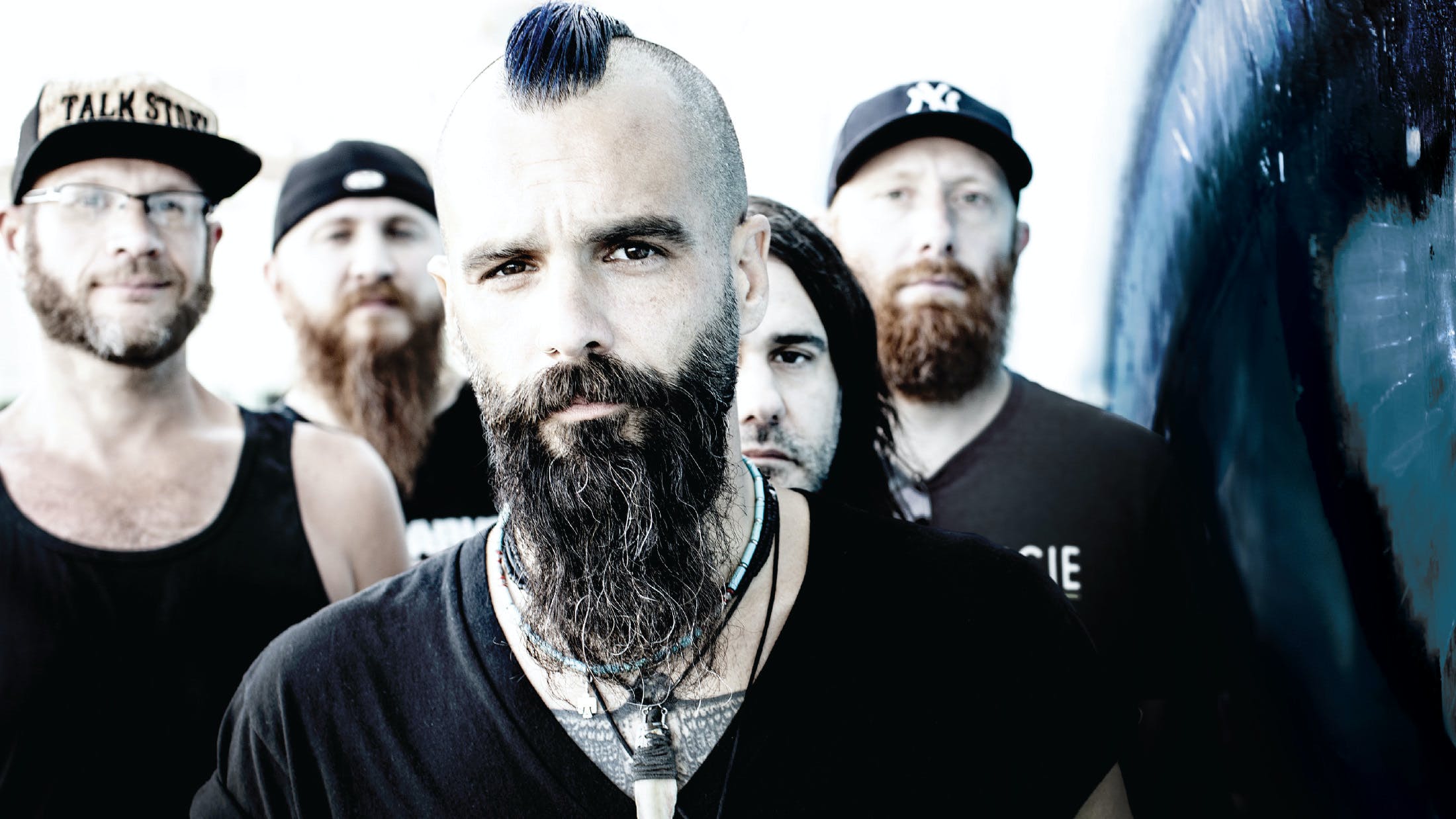 Jesse Leach chews the question over slowly, with a hint of laughter in his voice. The literal answer is easy enough. He’s sat in his home in the Catskills, the vast expanse of the Appalachian Mountains situated in southeast New York state, which has long been a playground for holidaymakers wanting to fill their lungs with clean air, and artists wanting to fill their heads with ideas.

Last year, during the two-month period when he was holed up, unable to speak, waiting for surgery to remove two polyps from his vocal cords, Jesse went from darkness to an almost monastic period of contemplation, thinking about what he’d do with his life if singing were no longer a viable option – which wasn’t beyond the realms of possibility given the initial conversations with his surgeon. He decided he’d be a ranger in a national park. Looking over his surroundings, knotted trees stretching over a boiling river like hands lingering above a cauldron, the appeal is obvious.

The area’s serenity has certainly been a source of comfort to Killswitch Engage’s frontman, whose travails in recent years have resulted in some serious soul-searching, which makes pinpointing exactly where he’s at right now a rather trickier proposition.

“I’m in a good spiritual headspace,” the 41-year-old begins, his tone less certain than his words. “I’ve gone through a major amount of transition. You go through rough times and you come out the other side like a phoenix rising. So I guess I’m feeling like a phoenix these days.”

READ THIS: How The End Of Heartache made Killswitch Engage superstars

That may well be, but the taste of the ashes he’s risen from remains pretty fresh. He’s currently in the midst of a divorce from his wife of 16 years, Melissa. The pair were married just weeks before the Massachusetts metalcore mob went out on tour in support of their second album, 2002’s Alive Or Just Breathing. Melissa was there when Jesse left the band that same year, his depression getting the better of him, resulting in his disappearance off the musical radar. She was there when he juggled ‘normal’ jobs in relative obscurity – in an organic bakery, chopping wood, assisting a woodsmith – before re-embracing music with the bands Seemless, The Empire Shall Fall, and Times Of Grace alongside Killswitch guitarist Adam Dutkiewicz. Melissa was there, too, when Jesse returned to the Killswitch fold in 2012.

Last May, Jesse described his wife as his “biggest fan, biggest critic, best friend, partner-in-crime and the love of my damn life”, acknowledging her unfailing support during his “game-changing” surgery and subsequent recovery. Their parting has clearly come as a source of great pain for Jesse, who in January took to Instagram to confirm he was seeking help for his anxiety and depression, to avoid becoming “another statistic of suicide”. He promptly left social media soon after.

“I firmly believe everything happens for a reason,” he says of the split today with audible hope, before shutting the door on that particular topic.

There’s no suppressing the ferocity of Killswitch’s eighth album, Atonement, though.

“Atonement is a strong, powerful word,” explains Jesse. “To me it’s about a righteous anger – for holding people accountable for what they’ve done. It’s also about self-reflection and self-atonement, forcing yourself to come to terms with what you’ve done and what you’ve come through. I think it’s something everyone can relate to in some way.”

There are religious connotations to the word, too. When Jesse last spoke to Kerrang! in June, he painted a picture of a restless upbringing, skipping from town to town as his father followed the religious calling that in the ‘70s transformed him from hippie biker to zealous minister.

“I am so disconnected from the way I was raised,” says Jesse today. “I wanted to bring that to the fore again, touching upon the hypocrisy of organised religion, and how it serves as a tool to divide us. Those who speak of a god of love with one breath – and chastise another person for who they love with the other.

“The word atonement is identifiable as a dark fire and brimstone-type Christian term, but I like redefining it with what I’ve been through. I liked the idea of taking a word and flipping it on its head. I did that purposely.”

Saturday May 26, 2018. Iron Maiden’s Legacy Of The Beast Tour kicks off in the Estonian capital of Tallinn. It’s four weeks to the day since Jesse’s surgery, yet somehow, against all odds, he’s here with Killswitch Engage, opening for the metal legends. Emotions are running high. Taking to the stage at the city’s 10,000-capacity Saku Suurhall, Jesse’s mind flashes back to the blood he used to spit out after live performances; to the noticeable change in his surgeon’s body language when he’d first looked at his ravaged vocal cords; to the fear he’d never sing again – or worse, that he had throat cancer.

Neither outcome came to pass. In fact, Jesse now performs better than ever, effortlessly reaching notes that had hurt him before, and even some he’d struggled to hit at all – such as a vibrato: a regular, pulsating change of pitch.

“It was among the best feelings I’ve ever had in my life,” he recalls of the momentous set. “So good, in fact, that I collapsed and sobbed afterwards.” That sense of jubilation remained tempered by feelings of depression, though. Between shows and on days off, Jesse would often be found asleep in his bunk; while in his waking hours he’d continually worry about “[his] own mortality as a performer”.

Three weeks later that would change. On June 13, the epic jaunt reached Berlin, specifically the Waldbühne, a vast amphitheatre opened for the Olympic Games in 1936. Three years later, it hosted a performance of the opera Rienzi by Richard Wagner, Adolf Hitler’s favourite composer, which Hitler also funded and co-designed.

Perhaps it was the strangeness of the setting, or the fact he was touring with Iron Maiden – or both – but the enormity of where Jesse was and what he was doing finally hit him.

“I was onstage at this crazy place, opening for one of the greatest metal bands of all time, who even after all these years were kicking our fucking asses,” he recalls. “And I felt this wave of joy and confidence go through my soul. I got offstage and thought, ‘I’m going to be okay.’”

But, as one door opened, another appeared to close for Jesse. He began to experience writer’s block. The creative process, admittedly, had never been easy for him. Some days the last thing he wanted to do was revisit feelings that could only bring him pain. He didn’t have much of a choice in the matter, however. The words were coming more slowly than ever, and when they did occasionally arrive he was protective of the results.

Enter Adam Dutkiewicz, who, as well as playing guitar in Killswitch, is the producer of Atonement. Having helmed multiple records featuring Jesse, Adam has long been respectful of giving the singer space when he works, having had enough years to come to appreciate the process. This time, however, Adam sensed something was amiss.

“I was in the midst of this, being inside my own head, and he’s asking to see stuff that I wasn’t sure about,” recalls Jesse. “In the end he had to say, ‘Why are you holding on to these?! They’re done!’ It wasn’t just writer’s block; it was self-doubt. I put so much pressure on myself.

“I needed someone to step in and say, ‘Snap out of it!’ If Adam hadn’t done that I don’t know what I’d be doing right now. I get by with a little help from my friends, as they say.”

One of those friends was Howard Jones, who had replaced him as Killswitch vocalist in 2002 until his own departure in 2012. No two people, surely, could understand the other better, having been pitted against one another by fans and the media alike, and both experiencing periods of poor mental health.

“[Recently] I felt an overwhelming need to speak to him, one-to-one,” reveals Jesse. “I said, ‘You have been one of my greatest vocal teachers, because I’ve had to mimic what you did and make it my own.’ I got emotional and gave him a big hug.”

Howard, now frontman of Light The Torch, appears on the track The Signal Fire, which features him singing the lyric ‘Can we walk a mile in another’s shoes’.

“The lyrics reflect the lack of compassion and empathy that people have for one another,” explains Jesse. “I thought it was a perfect line to have Howard sing, because of the things we’ve both been through, being compared to each other and all the fucking nonsense the media has put on us.

“I also got to hear Adam get on his ass like he does to me,” laughs Jesse. “Making him do things over and over. There was this solidarity between us, like, ‘Yeah, you have to go through this same shit that I have to, singing the same fucking part 20 times!’”

Through shared experiences, good and bad, with friends old and new, Jesse has reached a place where he can head his demons off at the pass. He’s grateful, too, for Killswitch Engage, the vehicle that allows him to express himself so directly so that he, and the band’s fans, can heal and learn together.

Killswitch Engage's latest album Atonement is out now via Music For Nations.