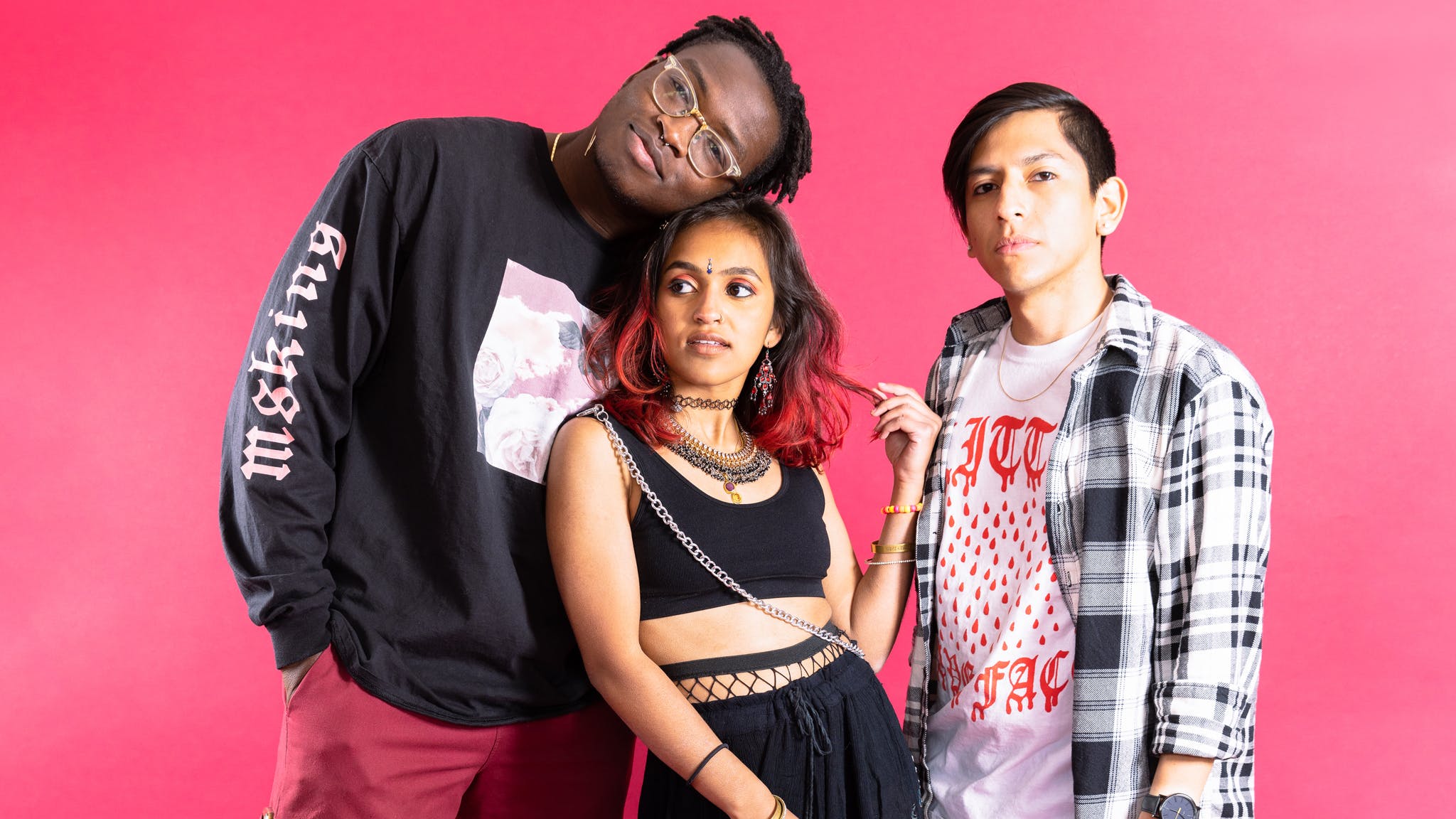 On the day that Pinkshift released their breakout hit i’m gonna tell my therapist on you, their drummer Myron Houngbedji was sitting his entry exam for medical school. When he came out of the hall, his phone was buzzing with notifications. In the space of seven hours, the song – a grungy punch to the jugular that’s equal parts defiant and wounded – had gone viral.

Pinkshift were only meant to have a limited lifespan. The Baltimore-based trio – completed by vocalist Ashrita Kumar and guitarist Paul Vallejo – released their debut EP Saccharine while still in college, intending to leave the band behind once the real world came calling. Ashrita was also going to apply to medical school, while Paul fancied himself as an engineer. After the success of …therapist, though, they decided to tear up their plans and face the frowns of their families.

“We all have immigrant parents, and they were like, ‘What did we come to this country for? We didn’t do it for you to play in your little band!’” Ashrita remembers.

They had another difficulty in trying to convince their folks of the viability of Pinkshift: they couldn’t show them the size of the rooms they were selling out, because no gigs were happening at the time. As a replacement, their numbers on socials didn’t have quite the same awe-inspiring effect.

“I don’t regret the decision [to pursue music], but I was definitely in a spot where I felt like a fucking loser,” admits Ashrita. In spite of Pinkshift’s initial struggle, however, they would grow to realise that popping off during the pandemic had its advantages.

“We didn’t have to do as much of the hard stuff, like dealing with people who weren’t interested in us,” the singer continues. “Even though it made us feel a little fake for not having had [to encounter] that, we were hustling our shit in a different way by doing it online.”

Now they’re being touted as the faces of a new wave of pop-punk. This has come as a surprise to them, however, particularly Ashrita, who never really listened to the genre growing up. They preferred the moodier, heavier sounds of Nirvana, Soundgarden and Stone Temple Pilots. You can hear this grit in Pinkshift’s own riffs, if you know where to find it.

The trio are set to release their debut album Love Me Forever later this year, and they anticipate that its sound will call the idea of them as a pop-punk band into question.

“I’m really interested in seeing how people react to it. It’s really cool seeing how people listen to our live set after hearing what’s online right now,” says Myron. “Our live set is a good amount heavier than what we have online, and the album is also going in that direction.”

With the way Pinkshift are going, it’s going to be eagerly devoured, whatever it sounds like.

Love Me Forever is due out on October 21 via Hopeless Records. This article was originally printed in the May 2022 issue of Kerrang!.

10 reasons why you need Pinkshift in your life

Ahead of the release of debut album Love Me Forever, Pinkshift look set to explode. Why do you need them in your life? Here’s punk’s most exciting new band tell you, in their own words…

Pinkshift drop massive new single nothing (in my head)

Baltimore breakout stars Pinkshift have signed to Hopeless Records, and shared their first new single for the label: the absolutely colossal nothing (in my head).