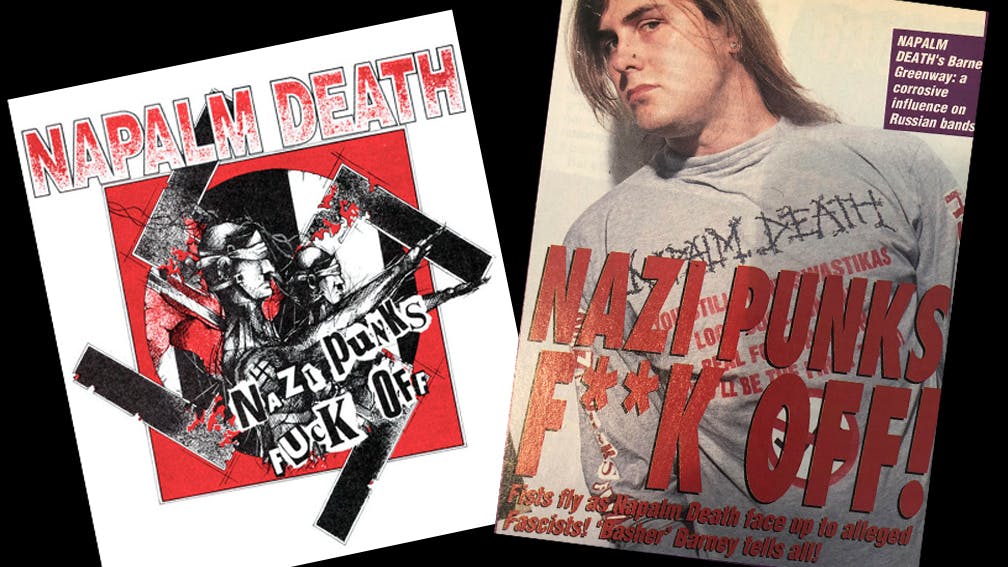 We’re rolling back the years here. All the way back to July 1994 when Midlands metal heroes Napalm Death took issue with some Estonian Nazis. More specifically we’re aiming our time travelling microscopic lens in the direction of July 15, 1994, when the grindcore legends found themselves at Rock Summer festival in Tallin, where they were sharing a bill with a band called Corrosive Metal. According to Napalm Death frontman Barney Greenway however, that’s only where things came to a head, as the sparks of the fire between the two bands were first started a few months prior, preceding the disintegration of the former Soviet Union.

“I saw a Channel 4 documentary about the links between Russian thrash metal bands and a fascist politician Vladimir Zhironovsky. We’d played with Corrosive Metal just before in Christmas 1991,” Barney told us.

“At the time it was all very nicey-nicey. Anyway, I saw the documentary and I tried to contact the band, but the telephone system in Russia is notorious.”

And then came Rock Summer in ’94, where they were thrown together again.

“We were sitting in catering,” Barney recalled, “and I felt I had to say something to them. They told me that the documentary was completely untrue and that they were thinking of suing.”

All fair enough then, right? A big fuss over nothing, maybe. A misunderstanding blown out of proportion. Barney wasn’t convined, mind. So he probed further.

“I said, ‘Why have you got song titles like Kill All The Bloody Foreigners then?’ Their reply to me was, ‘Do you like Turkish people as well then?’ I just walked away in disgust.”

Which might have been the end of things had everyone just left it at that and decided to keep their distances. Alas, that was not to be…

“Their guitarist asked to do an interview with Napalm Death,” Barney continued. “I told him I didn’t do interviews with Nazis. He pushed me, I pushed him, and Shane [Embury, Napalm bassist] jumped in and gave him five in the head! It all went off from there and turned into a massive brawl.”

All things considered, Corrosive Metal probably should have paid closer attention, really. Napalm Death – being of sound mind, judgement and just y’know, not being arseholes – had already made the world very aware of their stance on nationalist socialism. In fact, the band had released their Nazi Punks Fuck Off EP in June 1993 (featuring, of course, a cover of the Dead Kennedys classic).

Sadly, in recent times, thanks to the insidious rise of fascism, the Brummy veterans have had cause to remind the world at large when in 2017 they teamed up with Indiemerch to produce a Nazi Punks Fuck Off T-shirt run, with $10 from each sale donated to the Southern Poverty Law Centre and/or American Civil Liberties Union. If that sounds like something you'd like to support you can still pick one up here.

In case you were in any doubt, and for those sleeping at the back: Napalm Death = good dudes. Nazis = very much not.