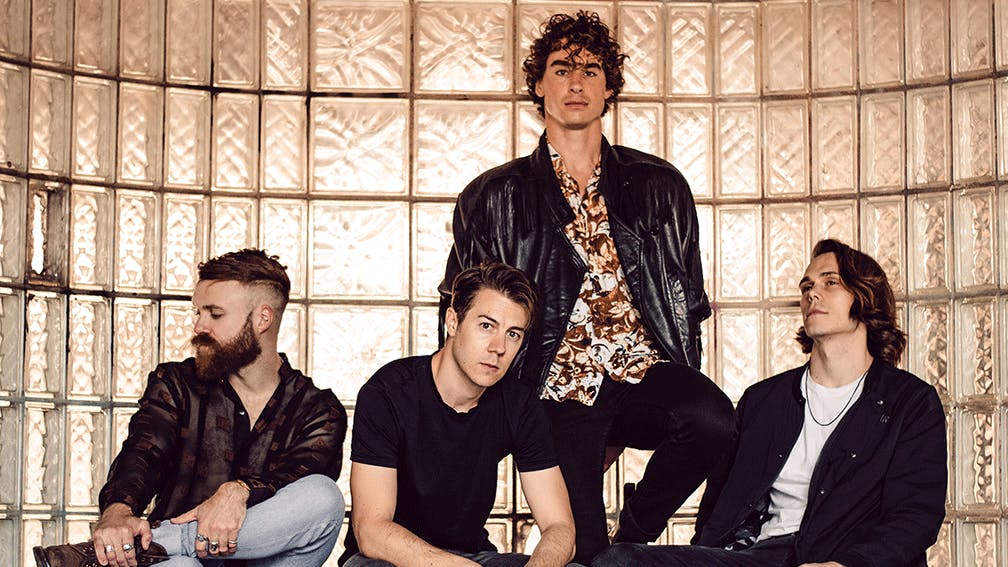 This week, Don Broco arrive back on these shores for a string of arena dates in support of their third album, last year’s Technology. We're excited, you're excited and they're excited.

Ever the professionals, those Bedford boys haven’t left the small matter of what they’ll play during the biggest UK shows of their career to chance. No siree – instead, they’ve been road-testing their arsenal of bangers for maximum effectiveness during the European dates preceding their arrival in Manchester on Friday.

This included a show at the Die Kanteen venue, in the German city of Cologne, which saw the band treat the 1,000 fans there to 90 minutes of sonic slickness. We caught up with frontman Rob Damiani on the night, who talked us through some of his highlights.

Come Out To LA

“It’s arguably our biggest song from [third album] Technology and it gets the crowd going right from the start because everyone knows the words. As a result, we used to use it as an encore, but we’ve started opening with it recently. Matt [Donnelly, drummer] comes out on stage by himself, which gives him the chance to shine as a singer in his own right. In the video there’s a little joke about him wanting to be a lead singer, so we made that a reality at this point. Then we all crash in when it drops.”

“It’s been one of the most enjoyable songs for us to play and for the crowd to hear. We include the Lars Ulrich intro [A sample of the Metallica drummer asking ‘Where’s Bedford?’ on his radio show, which is included on the album version of the track]. We hadn’t done that before, but included it at Reading and Leeds festival. It was especially effective in Reading because it’s closer to Bedford. Thanks to Lars I think we’ve really put Bedford on the map!”

“It’s always good to throw this one is as it’s a little different from the other songs on Technology. It wears its Britpop influences on its sleeve, so it has a certain confident swagger to it that makes it enjoyable to play. Some songs just make you feel massive when you’re playing them, and fire you up for the rest of the show. This is definitely one of them.”

“It’s not a typical Don Broco song. I don’t know why but we tend to write succinct, no chaff pop songs. It’s not something we think to do, but it’s what we end up creating because it’s what we like. Porkies is a little more experimental, letting the music do its thing without worrying about choruses. Because of that, from a live perspective you’re never quite sure how it’s going to go down. People tend to love the energy and aggression of it, which isn’t something we typically did. I’m not sure people think of Don Broco as an angry band, so it’s good to throw something in that shows a different side.”

“I don’t know if it’s because it was such a vibey live video, which we shot at Reading a couple of years back, but it always makes crowds go off. The opening of it has this house feel to it and then it crashes in, so it has a bit of everything. When we were in the studio making it, there was a bit we called the ‘Liam Gallagher at Knebworth moment’, which is the bit with the lyric that starts ‘Lying awake…’, but some people also called it the ‘Robbie Williams moment’. Whatever it’s called, with that acoustic guitar and arms in the air feeling of elation, people react well to it live.”

“It’s a new arrangement that we’ve tried out once or twice on this tour. Because we’re playing for an hour-and-a-half – this all-singing, all dancing bombardment of sound and lights – we thought it would be good to have a moment when we bring things down. It’s nice having that emotional side to things as well, taking a moment to breathe. Playing it acoustically makes it sound beautiful, and the focus is much more on the melody and the lyrics. For me, personally, it’s the most emotional song I’ve ever written. It’s about my friend who passed away a few years ago. His support of what we were doing musically, and attitude to life, definitely kept our band together. With a lot of the songs, I’m performing them but not really thinking about what I’m singing. With this song, I’m thinking about everything that went into the creation of it, and the emotion comes over me, which I think is a good thing.”

“It was the last video we put out from Technology, which featured a pretty complicated dance routine that Tom [Doyle, bassist] and I learned for it, but quickly forgot. Last night in Paris was a particularly crazy show, with loads of crowdsurfers and stage divers, but this isn’t really the song for that. When people were coming up to stage dive, I told them they had to dance first, and these three girls came up and knew the entire routine. We let them take the stage and they killed it! Everyone fucking love it and it really made the song for me.”

“For a long time, before we released Technology, it was the highlight of the set. Releasing that song was a turning point in our career and got us on a lot of people’s radars. Sometimes when we play it, I remember that we wouldn’t be signed to the label we’re with now [SharpTone] if it wasn’t for the head of the label discovering it through Guitar Hero.”

Half Man Half God

“It had its big debut in Paris last night. It’s always a little bit daunting when you play a song for the very first time, but if that song has been out for a few days, you at least know that the people at the show will be your fans, so will have heard it. We knew we were going to be okay, because we could hear people shouting for it right from the start of the set. I remember when we played You Wanna Know for the first time ever, main stage at Reading; it had only come out that morning, so no-one had heard it and the crowd didn’t know how to react. I hated that, but we learned from it.”

“When it’s freezing cold outside, or it’s a large venue that isn’t warm, people can be a little resistant to swinging their T-shirts during this one. In those cases, I make it clear it doesn’t have to be a T-shirt, but whatever comes to hand. The song is all about the release of emotion and pent up energy, and how something seemingly insignificant as swinging a T-shirt around your head can get you through something. So people can swing T-shirts or jackets or handbags. Actually, maybe not handbags as you’d probably knock someone out and lose all your stuff…”

Don Broco tour the UK this month, with support from Issues and Neck Deep. The band's new single HALF MAN HALF GOD is out now on Sharptone.