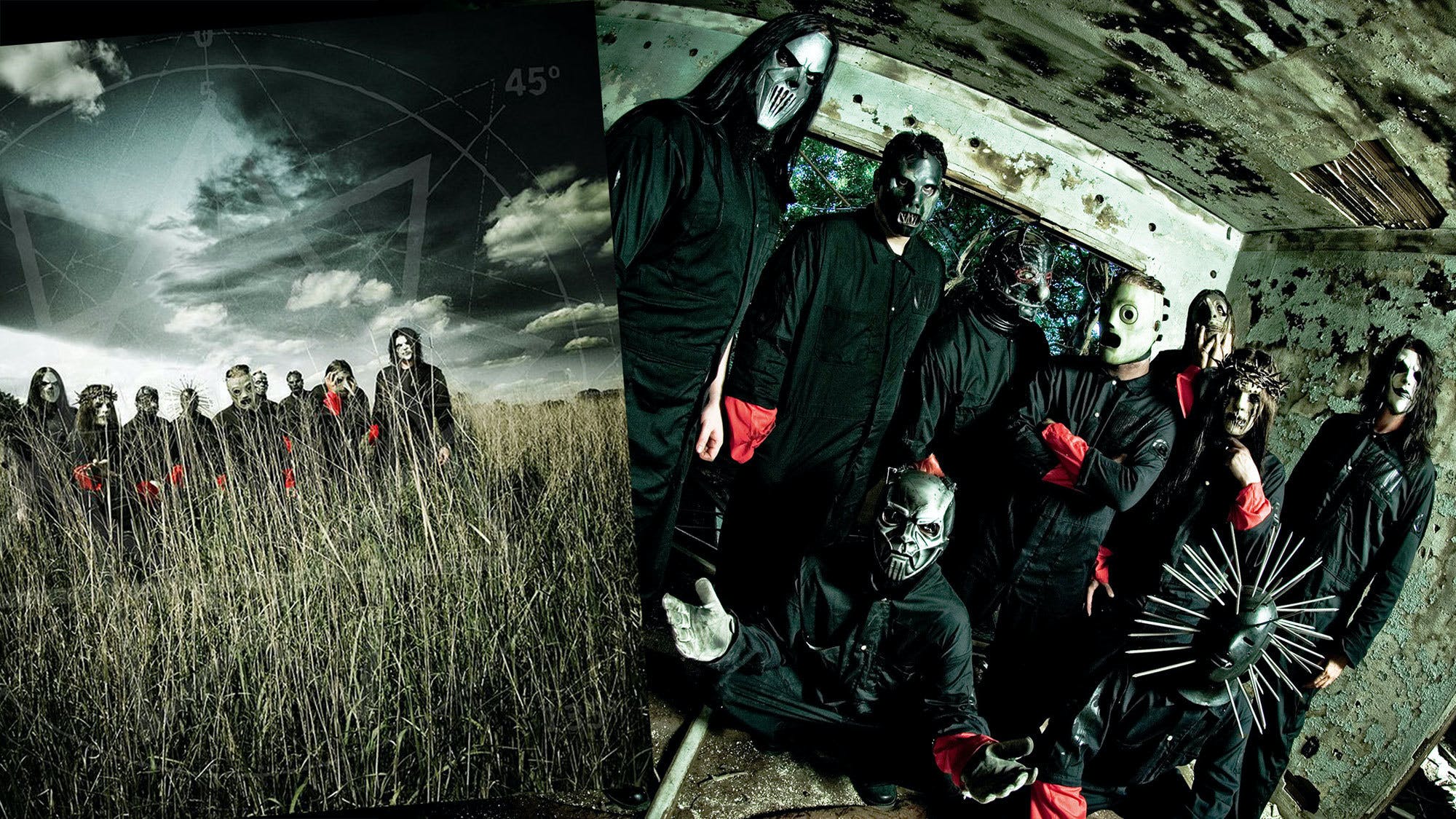 For nine years it had been the nine members of Slipknot against the world. They didn’t know it at the time of course, but the line-up that released the band’s explosive self-titled debut album in 1999 would see out their final one in 2008’s All Hope Is Gone. Within two years bassist Paul Gray would have died and drummer Joey Jordison would depart the band (he later passed away in July 2021), shortly before they dragged themselves back from the brink with .5: The Gray Chapter.

In that respect, you might think that All Hope Is Gone represents a more settled period for the band. But this is Slipknot we’re talking about, and it seems that they only ever operate from a position of barely controlled chaos.

“I’d love to be doing anything other than Slipknot right now,” Shawn ‘Clown’ Crahan told Kerrang! when we joined them in Iowa for the flame-filled filming of their Psychosocial video. The band had taken a two-year hiatus after coming off the road in support of 2004’s Vol.3: (The Subliminal Verses) and real-life had impacted in various ways.

For Clown this included the death of his father and having to commit his mother to a nursing home, as well as dealing with his wife’s ongoing battle with Crohn’s disease. Corey Taylor went through a messy divorce and Joey was dealing with substance abuse issues, although he told us at the time that he was clean and relatively sober.

“The last time I took any narcotics was before the New Year. I can’t do that shit anymore. It was just stupid rock star bullshit,” he said, before showing us a picture of himself looking pale and drawn, hooked up to intravenous drips. “That was taken at Mercy Hospital in Des Moines. Before we started recording this album I had them flush my system so I could kick this thing once and for all.

“The hate is definitely back,” he continued. “But where the hate on [2001 album] Iowa was for each other, this is for the fucking naysayers and the people who try to break Slipknot down. When you get us nine guys together, it doesn’t matter dude, it’s fucking on!”

While the drummer was trying to present a one-man united front, there were schisms and cracks behind the façade. Clown would reveal a decade later that four members of the band – himself, Corey, guitarist Jim Root and DJ Sid Wilson – recorded what amounted to a whole other album’s worth of material that they considered too experimental for a regular Slipknot LP (Clown has since tantalisingly suggested that this shelved material might be released). In 2008, though, it was a step too far – even for an album that would be their most diverse and experimental to date.

All Hope Is Gone was the first Slipknot album to be recorded in their home state of Iowa (even Iowa itself having been recorded in California). Slipknot side-projects Murderdolls and To My Surprise had already cut albums at Sound Farm studios, an hour’s drive from their hometown of Des Moines. Built in seven acres of wilderness (where the aforementioned Psychosocial vid was filmed), it provided the perfect setting for Slipknot to get their creative juices flowing.

“We’re from the middle of nowhere, so we might as well record in the middle of nowhere,” Corey said, noting that he would use the drive in to listen to rough mixes of the songs and play through ideas in his head. He also endeavoured to make the drive home every evening – both to see his young son and to avoid the craziness that tended to accompany any Slipknot recording session onsite. On this particular occasion, it involved quadbikes, explosives and guns.

“There was a .22, a couple of handguns and a nice pump-action shotgun,” Corey told us. “I got to fire some of that shit, which was cool but, thankfully, before those guys got too out of control with it, Clown put a stop to it. He was like, ‘We are Slipknot, and somebody’s going to get killed.’”

Thankfully no-one did. The end result was an album that saw Slipknot flexing their muscles and spreading their wings. Gematria (The Killing Name) was as brutal an opener as (sic) from the debut album, but then you had the creeping chill of Gehenna and the full-on dark balladry of Snuff – one of the positive things to have come from Corey’s break-up. “This is the slow one. Not naming names, it’s about someone who helped me through a lot and I thought she felt the same way I did and then she really let me down,” he suggested at the time.

It didn’t all work, though, and with the benefit of hindsight, there are parts that look patchier than a Bloodstock battle jacket. Dead Memories still divides opinion, and the likes of Butcher’s Hook and Wherein Lies Continue are unlikely to make many fans’ ultimate Slipknot playlists. There was still plenty of killer amidst the filler, however, and the album took them to new commercial heights, scoring their first Number One in the U.S. Billboard 200.

Asked what the mood was in the Slipknot camp just prior to the release of All Hope Is Gone, Corey was philosophical.

“We have moments where we get along great. We have moments when we fight. That’s just how it is,” he shrugged. “I’m just making the most of it because it could all end tomorrow. You just never know with Slipknot.”

Over a decade on and despite the band facing some incredible challenges, the wheels still haven’t come off. Right now, in fact, they are one of the biggest and most exciting metal bands in the world. All Hope Is Gone might not be their finest album, but it was a vital step in that journey.