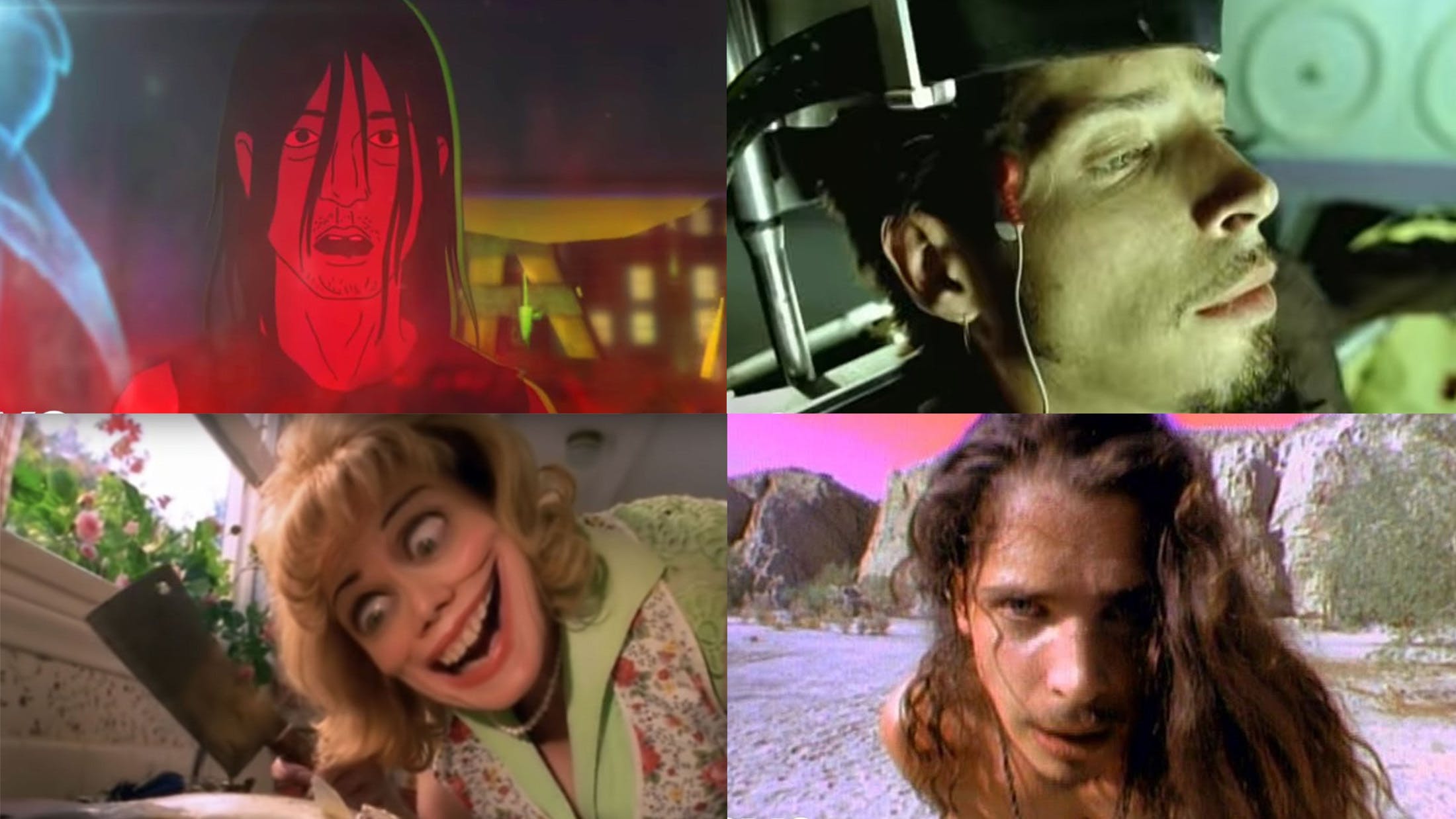 They might have been at the forefront of the grunge explosion but Soundgarden were always reluctant rock stars. Musically they were fearlessly inventive, but they weren’t always keen on playing the MTV game. They frequently grumbled about the way their videos turned out and plenty of their promo clips basically featured the band looking moody and playing the song – often in a steelworks for some reason.

Sometimes though, the visuals did match the sheer genius of their songs. Often arty and sometimes surreal, here are the pick of Soundgarden’s finest videos…

Black Rain was largely written during the Badmotorfinger sessions in the early '90s but didn’t see the light of day until the 2010 compilation Telephantasm, with a simultaneous appearance on Guitar Hero: Warriors Of Rock. It was their first new release in over a decade and featured an entirely animated video by Metalocalypse creator Brendon Small. Cue a cartoon Soundgarden playing on a glowing hover-disc, giant space-bugs and a guest appearance from virtual metal band Dethklok.

‘Follow me into the desert,’ croons Chris Cornell in the opening line and the video director takes him at his word. There’s nothing particularly complex going on here but there are some stunning shots as the band troop through the Mojave desert with burning trees and electrical storms as a backdrop. It’s simple but effective and dramatic, much like the song itself.

This was the band’s first ever single and video and is suitably raw and gritty. Shot in grainy black and white, it starts in art-school project fashion with the reassembling of an orchid before cutting to grainy footage of the band onstage and walking through the city. It’s not their grandest visual moment but it did gain traction on MTV’s more underground 120 Minutes segment, helping to build the momentum for a still nascent Seattle rock scene.

Aside from on a series of black and white photos, the members of Soundgarden didn’t even appear on the first video from their breakthrough album Superunknown. Instead, they were happy to let Seattle street performer Artis The Spoon Man take centre stage. Artis is known for playing music on sets of spoons and goes full out on the song that he inspired. It’s an odd, quirky and endearingly human moment.

A lot of Soundgarden’s songs and at least a couple of their videos took on a new poignancy after Chris Cornell’s death. The singer told Rolling Stone at the time that The Day I Tried To Live had been “misinterpreted as a suicide note song”. It did, however, deal with themes such as seclusion, isolation and anxiety. “It's about trying to step out of being patterned and closed off and reclusive, which I've always had a problem with,” Chris added. The video captures this mood perfectly, with the clip’s protagonist floating from a hospital bed to appear dazed and alone in a number of different settings.

The original video for Pretty Noose was banned by MTV as it ended with a despairing Cornell apparently having committed a murder. Prior to that denouement it went through a series of scenes like a psychedelic thriller-noir, with bikes and tattoo parlours and demon dancers. There was an alternative version that just featured the band playing in a studio with some groovy visuals behind them. It’s worth noting that, despite the title, this is not a song about suicide either. Asked by MTV what the ‘pretty noose’ represented, he said, “It's just sort of an attractively packaged bad idea, pretty much, something that seems great at first and then comes back to bite you.”

This is one for the film buffs, as it references and combines both A Clockwork Orange and conspiracy theory classic The Parallax View. Chris is strapped into a chair much like Alex from Stanley Kubrick’s dystopian sci-fi flick, and forced to watch a film that is clearly based on the brainwashing montage from The Parallax View. The band can also be seen playing in a chamber that blows up in the final climactic scenes of the video.

Jesus Christ Pose was another video that was banned by MTV, as well as garnering criticism and reportedly death threats from sections of the religious right. The song itself is not anti-religious, dealing with famous people that Chris said “imply that they're either a deity or persecuted somehow by their public”. The video certainly flirted with religion though, starting with a dialogue banner reading, ‘And God So Loved Soundgarden He Gave Them His Only Song’. Then everything goes apeshit in a quick-flashing diorama of crucifixions, Terminator-style cyborgs, inverted crosses and trippy visuals. It’s still stunning nearly three decades on.

One thing that unites most of the the videos up to this one is that they tend to be serious, if not outright grim in tone. Enter one Dave Grohl, who directed By Crooked Steps and injected a sense of humour into the process. In the video Soundgarden portray a badass biker gang, playing poker and looking moody. So far so noir but the reveal – when the camera pans out and they’re all shown to be riding Segways – is downright hilarious. As is the slow-motion police chase at the end. Dave, take a bow for getting the band to poke fun at themselves so effectively.

Surreal, disturbing and quite, quite brilliant, British director Howard Greenhalgh’s visual take on one of Soundgarden’s finest musical moments undoubtedly produced their most memorable video. The warping faces and nightmarish glimpses beneath the cracked façade of suburbia slowly build to a truly apocalyptic climax as the town is wiped out by the burgeoning Black Hole Sun of the title. Guitarist Kim Thayil once told Guitar Magazine, “We've been disappointed with most of our videos” but added that they were “very satisfied” with Black Hole Sun, which is the nearest you’ll get to the high praise this video deserves.