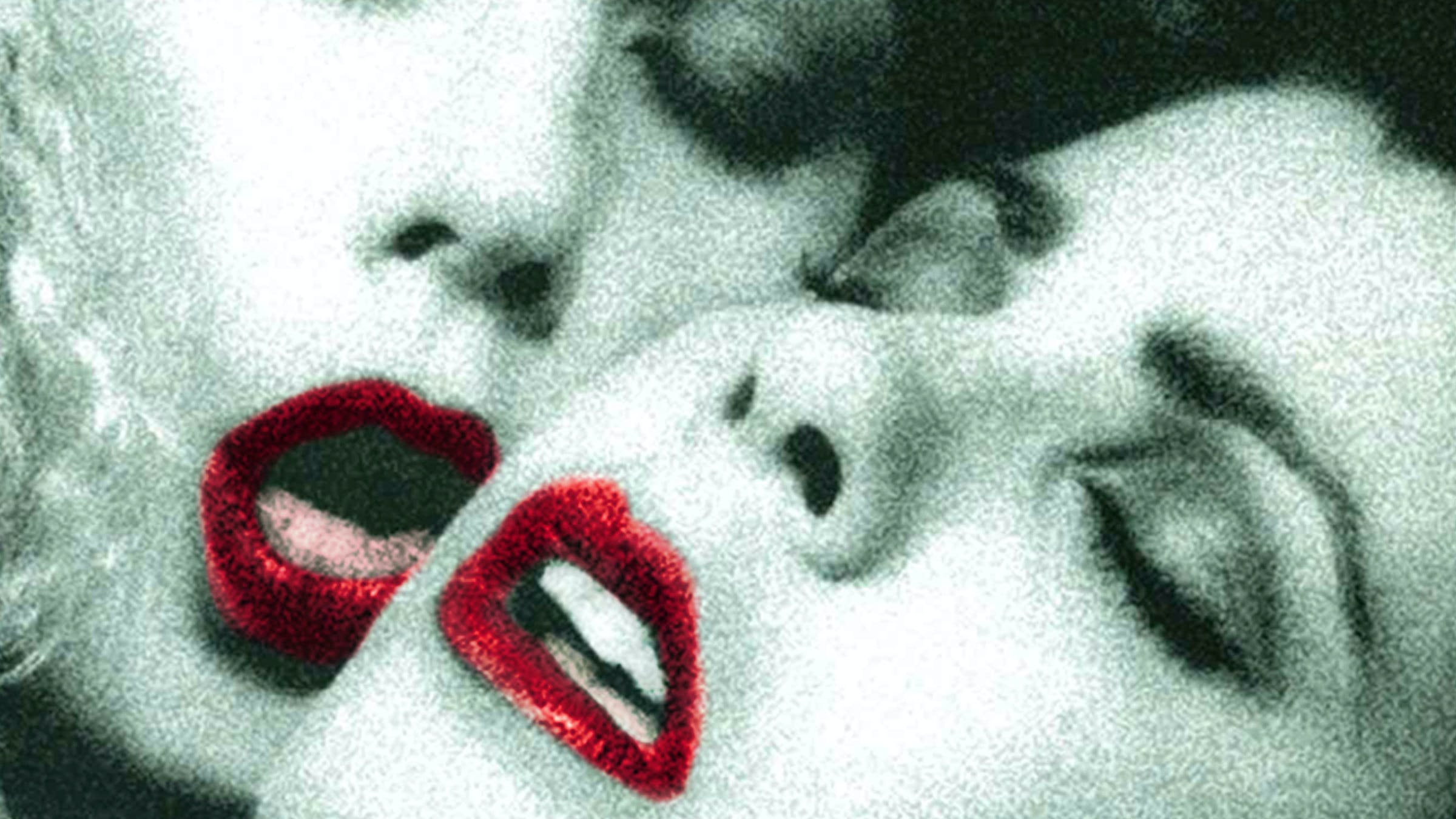 Brooklyn gothic metal band Type O Negative might be infamous for their overt themes of sex and sensuality, but that wasn’t always the case. Their first two records, Origin Of The Feces and Slow, Deep, And Hard were mostly just abrasive and heavy, with fairly angry and violent (if tongue-in-cheek) lyrics. It wasn’t until 1993, when they released their now-iconic album Bloody Kisses, featuring two women about to kiss on the cover, when they decided to go all in with lyrics directly about sex and lust. The album saw them softening up on the musical side, too, slowing down the tempo and trading in punked-up riffs for organ interludes and acoustic guitars. The songs were also tinged with blatant vulnerability about love, longing, and loneliness – all written and sung by frontman/bassist Peter Steele, a brutish, 6’8” man with sharpened, vampiric canines and flowing black hair.

The concept of a dangerous-looking Dracula type singing about love and vulnerability proved to be extremely effective, if maybe accidental: Bloody Kisses was the first Type O Negative album -- and first-ever album on Roadrunner Records in general – to go platinum, and women began coming to their shows in droves. As a result, Peter became an instant mainstream sex symbol, posing nude for Playgirl and going on the Jerry Springer Show to talk about groupies. The record undoubtedly changed the course of their entire career and cemented their legacy as the band we now think of as Type O Negative; they continued on that path for the most part until Peter’s death in 2010.

To mark the 27th anniversary of Bloody Kisses' release, we look back at the 10 sexiest songs Type O Negative ever wrote.

9. Unsuccessfully Coping With The Natural Beauty Of Infidelity

This is a very pissed-off, yet very tongue-in-cheek, 12-minute opus about someone attempting to reason with their long-term partner cheating on them. It’s fun as hell to sing along with the silly, anthemic chorus of 'I know you’re fucking someone else!' and the backup response, 'He knows you’re fucking someone else!' and it contains a lot of extremely ridiculous moments like Peter yelling, 'Kenny!' right before guitarist Kenny Hickey flies into a crazy solo.

At first glance, some may call a few of the lyrics misogynistic, but if you choose to see it as a genderless song from the point of view of an angry, heartbroken lover who’s letting their rage out in a goofy song, it’s pretty relatable for anyone. It deserves a ranking in their sexiest songs because at 2:57, the anger gives way to an acoustic section where a woman moans in pleasure for over a minute. In a hilariously theatrical moment that showcases the self-deprecating humour of Type O – right when she’s climaxing, you can hear Peter’s jealous scream.

Too bad, Peter. Sounds like she was having a great time.

How Could She? is another take-it-with-a-grain-of-salt song in which Peter lists every fictional woman from cancelled television shows he’s ever loved, including Morticia Addams, Marilyn Munster, and even Wilma Flintstone, and asks why they’ve left him. The sleazy, dance-on-the-bartop-in-your-leather-skirt riff that dips and returns throughout its entire seven-plus minutes would be reason enough for it to land on this list. But there’s something especially sexy about a catchy, ultra-masculine song where the gorgeous, terrifying lead singer pours his heart out and cries, 'Why don’t you love me anymore?'

Lyrically, there’s nothing sexy about this song, as it’s about spending Christmas missing relatives who have passed on, and drinking a lot of red wine to cope with the grief. But the music itself is slow, sweet, and brooding... and it belongs on your sex playlist if you like it passionate, intense, and just a little bit dangerous. And really, who doesn’t?

6. Black Sabbath (From The Satanic Perspective)

This is a cover of Black Sabbath’s Black Sabbath – except Type O decided to flip the script so the song is from Satan’s point of view. Naturally, they made it unbelievably sexy. Rather than a terrified mortal meeting Lucifer and realising he’s going to Hell, this song is about Satan meeting a mortal woman and seducing her with his commanding, deliciously dangerous presence.

'Who is she that kneels so respectfully before me / A virgin of snow white purity,' Peter says in his most demonically enchanting voice. 'Do not fear, my fortunate one / Let us consummate our igneous union.' In all Type O songs, in some way or another, Peter plays the terrifying yet irresistible figure of your dreams – and in this song, he gets to be the ultimate personification of that.

This song is straight up about going down on a woman while she’s on her period. 'The 28th day, she'll be bleeding again / And in lupine ways, we'll alleviate the pain,' Peter hints in the intro, referring to both the pain of being alive and also, likely, the woman’s menstrual cramps. 'Don't spill a drop dear, let me kiss the curse away / Yourself in my mouth, will you leave me with your taste?'

Of course, because this is Peter Steele we're talking about, the song is one giant comparison between menstrual bleeding and lycanthropy (becoming a werewolf – hence the bridge where he recites lines like, 'Beware the woods at night'). But aside from the obvious, this song is sexy because it seems like the blood only serves as a turn-on for the protagonist. And every dude out there could learn a few things from that.

Peter grew up in a Catholic home, so he was very familiar with the lust for sin that often breeds when the threat of eternal damnation is at stake. As such, he wrote Christian Woman about a lady deeply in love with Christ, but whose lust becomes too much for her to handle, so she masturbates to the thought of him. (In a few ‘90s interviews, he mentions several women telling him that they thought Jesus was a “babe,” so that became the inspiration for the song.) 'Forgive her, for she knows not what she does,' a breathy Peter says to start the song, mimicking Jesus' last plea to his father during his crucifixion before waxing poetic about how the woman’s lust burns in her mind and between her thighs.

Just try and listen to that without getting turned on.

2. Love You To Death

One of the absolute sexiest things about Peter was that, while being a brutish, intimidating, vampiric man, he was also raised in a household full of women (a single mother and five sisters), and he was so utterly intoxicated by women that they completely disarmed him. Love You To Death is a dark love song that represents these two sides of him equally: He begins by threatening, 'The beast inside of me is gonna get ya,' but later shifts to being at the woman’s service, too. 'Black lipstick stains her glass of red wine / I am your servant, may I light your cigarette?'

This song also contains an example of Peter’s brilliantly subtle cheekiness buried beneath obtuse sexual references: In a nod to Pink Floyd, and being comfortably numb to the pain of the outer world while enraptured by the haze of their lovemaking, he says, 'Her hips move and I can feel what they're sayin', swayin'...'

This song isn’t necessarily directly about about sex, nor is it immediately the sexiest sounding song in the Type O discography. But this is unequivocally their sexiest song because of the way it makes you feel.

At first glance, Black No. 1 a song about a hot goth girl who drives Peter crazy in a roller coaster of a toxic relationship, and refuses to leave the house unless her blonde roots are taken care of with a fresh box of Black #1 hair dye. Ultimately, however, it’s an anthem for those who get turned on by danger and revel in darkness, vanity, and doing whatever we damn well please. “I went looking for trouble, and boy, I found her,” Peter growls in the intro, both defeated and hopelessly enraptured by her antics. “She’s in love with herself, she likes the dark..."

And at the end of the day, what feels sexier than loving yourself?

The Pete Steele I knew: A dry-witted giant who played the media at their own game