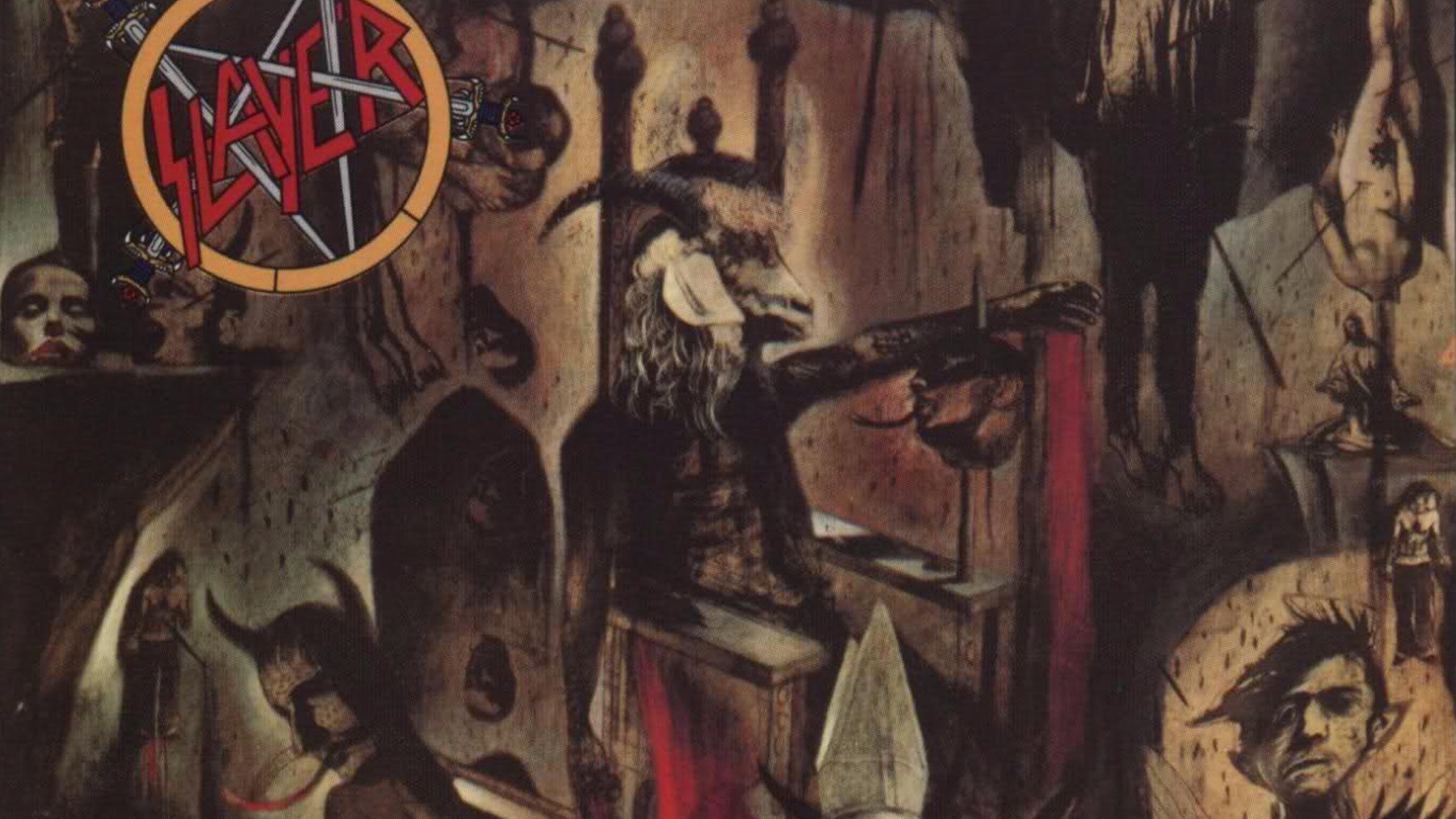 Across four decades, Slayer have blazed a trail of unholy thrash metal the likes of which the world will never see again. That the band have become the cultural institution they are with little to no help from mainstream radio or television is surprising; that they have done so with such furious songs about pitch-black satanism, the atrocities of war, and sex murder is downright astounding. And yet, today, Slayer are still a fixture in modern music.

For those who've never carved the band's name in their arms, Slayer first emerged in the early '80s as a Venom-worshipping party-thrash act whose 1983 debut was a rollicking celebration of good-timey devil-worship. But by 1985's Hell Awaits, they had embraced a starker sound, and in the mid-to-late '80s crafted three landmark albums with famed producer Rick Rubin: 1986's Reign In Blood, 1988's South Of Heaven, and 1990's Seasons In The Abyss. Around that time, the band lost founding drummer Dave Lombardo, believed by many to be the best drummer in extreme music.

Slayer experimented with new sounds throughout the '90s while turning their live show into one of metal's most reliably awesome experiences. Then, on September 11, 2001, they released God Hates Us All, an album that revitalized their career and took them in a new, more hardcore-influenced direction. This eventually led to them winning two GRAMMYs in 2008 and 2009. In 2013, founding member of prolific songwriter Jeff Hanneman died from cirrhosis of the liver; after a few rotating replacements, Exodus guitarist Gary Holt joined the band, leading to the release of 2015's Repentless. But, on November 30, 2019, Slayer played their final show and went into retirement.

Across their long and storied career, the band have written countless incredible songs. But at the end of the day, there are a handful of Slayer tracks that every fan really needs to know. So, we decided to put together a list of the ultimate Slayer songs that every metal fan should have branded in their memories. Enjoy, and hail Satan.

Fucking radical. When Slayer get cited as a party-metal band by old-school thrashers, they’re usually thinking of songs from their 1983 debut Show No Mercy. The most traditionally killer of these tracks is The Antichrist, a mid-paced earworm with lyrics about being the son of Satan and bringing down heaven. This song is a reminder that Slayer earned their way onto metalheads’ radar by writing one of the catchiest albums known to man.

1985’s Hell Awaits was where Slayer’s more extreme side boiled forth, with echoing production values and long, unorthodox songs full of sprawling vocabulary. The title-track of the album sets the band apart from their peers by forsaking typical verse-chorus structure – it opens with a demonic chant that becomes a towering citadel of riffs and drums, followed by a breakneck speed metal anthem whose chorus is simply an unholy voice growling the title. In many ways, that almost medieval dismissal of pop-rock cliché heralded the dawn of death and black metal, showing bands that the left hand path veered far away from the possibility of radio exposure.

The one and only. Slayer’s most famous single also happens to be the greatest album opener in metal history, and for good reason. The song has everything one wants: verbose descriptions of violent military history (for the band, it launches a career-long focus on WWII), two separate riffs that get stuck in your head, a chorus that gets longer the second time it’s sung, and maybe the sickest drum solo in all of heavy music. Angel Of Death is not only the Slayer song everyone expects you to recognize, it’s a song that represents all of underground metal, a reminder that the most extreme music in the world can also be fun as hell to listen to.

If Angel Of Death is Slayer’s big single, Raining Blood is their great work of art. The song’s eerie kick is like a primal Catholic rite, but the riffs that drive it are beautifully catchy. The lyrics, meanwhile, present an abstract flurry of half-described mood that feels as much like a fantasy sequence as it does the psych profile of a killer. The whole thing crashes and bounces like the storm whose rumbling and downpour open and close it. Short, sweet, and instantly memorable, it might be the Slayer song that is utterly perfect from start to finish.

On 1988’s South Of Heaven, Slayer wanted to prove that they could slow down and still sound evil. Mandatory Suicide proves that idea as fact – the song has as much malevolence and gravitas as any of Slayer’s speedier cuts. Here’s when you can hear Slayer’s true darkness in steepled spines that bristle at the American war machine throughout the track. Tom Araya’s monologue at the end (in a rare song that features lyrics written entirely by him) is chilling and subliminal, a ghostly decree over the churning riffs and untethered solos that close out the track. There’s a reason Slayer aren’t just considered fast and loose but deeply diabolical, and it’s right here.

Slayer are often heralded as the forefathers black metal and death metal, but their contributions to doom are often overlooked. Spill The Blood is perhaps the band’s slowest track, with thrash riffs played at a doom pace to create a hostile, cosmic atmosphere. The song acts as the perfect closer to South Of Heaven, the album on which Slayer sought to be more than rapid-fire artists – it feels arcane and brutal, evoking a star-spattered night atop an altar on a mountain, summoning something that babysat God. This is the Slayer track that entrenched fans adore, and one that connects deeply with the band’s often-overlooked philosophical side. If you don't know, now you know.

For all of Slayer’s red-and-black bloodthirst, there’s a whole generation of fans who associate them more with camo than crimson. War Ensemble is a gnarly, pissed-off rager, bathed in all the grim pageantry of warfare but more focused on the strain and angst of the soldier than, say, guts spilling on the battlefield. In that way, it’s a song for everyone – a furious paean devoid of fantasy, about how every day is a fight where victory is to survive and death is defeat. This track is the beginning of the secular Slayer, driven more by attitude than abomination.

It’s hard to describe how much Dead Skin Mask means to Slayer’s public persona. A fascination with serial killers, a psychological morbidity, and a creepy chorus that everyone can sing along to – this one checks all the boxes. At the same time, the track also drives home that the band aren’t solely reliant on speed and fury, and in fact have a strong grip on that underlying sense of peril and abhorrence that their music seems to exude so much more than that of the other bands in thrash's Big Four. The majority of the Slayer catalog is a sonic strobe light; this shows what these guys can do with a bare bulb swinging in a shed at night.

After three questionable LPs (well, two and a covers album), Slayer returned with God Hates Us All, an album that helped introduce them to a legion of new fans who'd grown sick of nu-metal’s glossy bullshit. While many of its more popular tracks – Disciple, New Faith, Seven Faces – showed Slayer going mid-paced and hardcore-influenced, Payback was a completely merciless throwback thrash song. But it still showed Slayer breaking new ground in the form of the track's lyrics – Tom Araya screaming, 'Payback's a bitch, motherfucker!' felt significantly more relevant in the modern metal scene than any longwinded description of Hell. A truly punishing album closer which reminded listeners that though its face may change, evil never dies.

Between 2001’s God Hates Us All and 2009’s World Painted Blood, Slayer had gone through a lot – they’d released an album, won two GRAMMYs, and had reunited and once more split up with founding drummer Dave Lombardo. They’d become the metal world’s biggest underground act, an institution that vindicated many extreme metal bands waiting for their time. But Psychopathy Red proved that years and accolades later, Slayer would always be Slayer, and could still write a song about a murderer that your casual rock fan would find hard to swallow. This frenzied exploration of Russian serial killer Andrei Chikatilo is as harsh a sonic acid burn as the band has ever recorded, and proved to the world that when it comes to ripping a track open and exposing its gushing entrails, no other band even comes close.