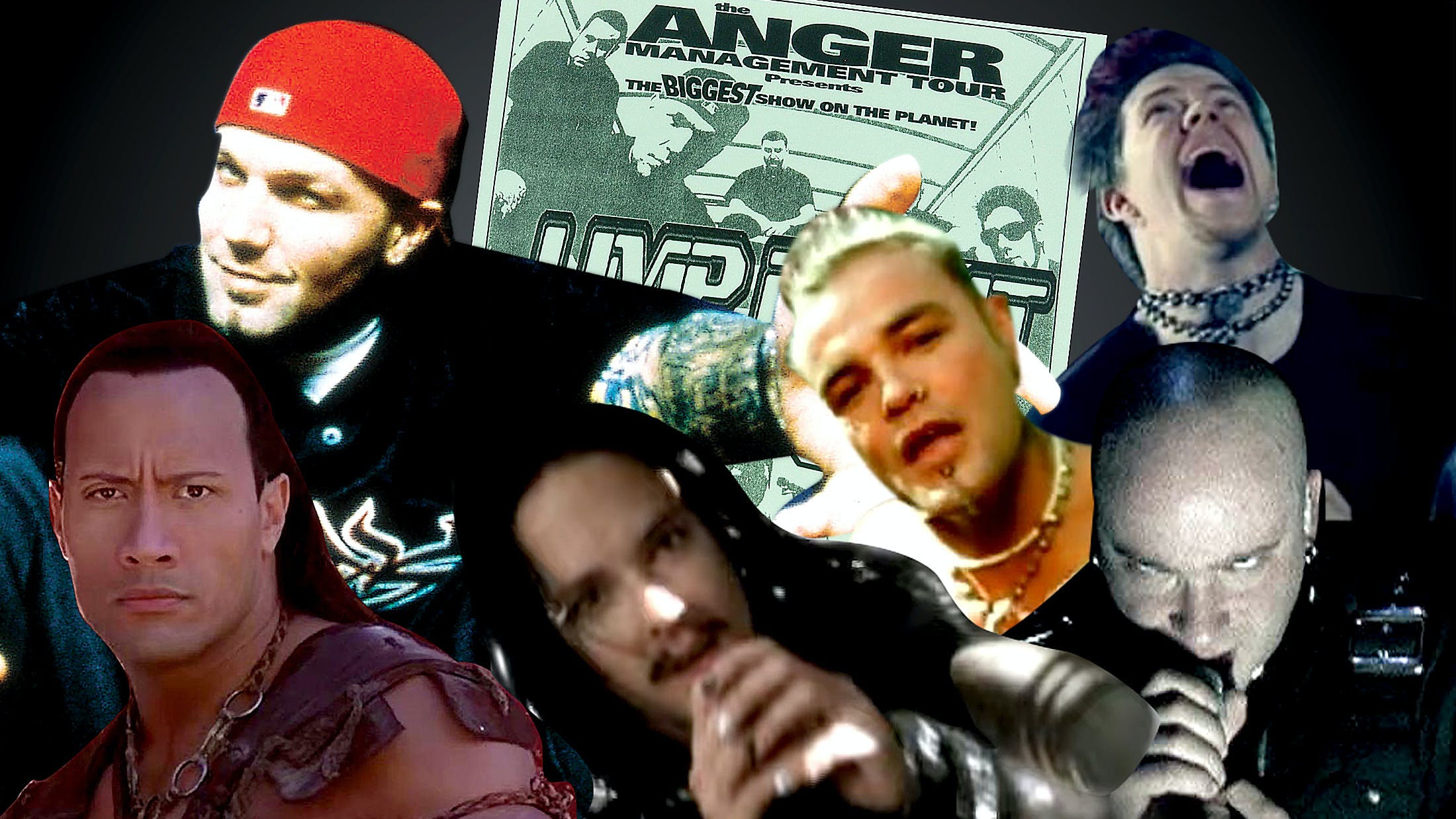 On the one hand, everyone knows what nu-metal is: big-trousered, aggressive metal with hip-hop influences. But on the other hand, isn’t it more than that? The label was applied equally to goonish silly-named clones sporting big wallet chains and genuine innovators like System Of A Down, Slipknot and Linkin Park.

Small wonder that most bands thought of as nu-metal reject the title – it’s too culturally loaded and easily dismissed as something silly, brash and samey, all (regrettable) style and no substance. But for every crew of goofy-ass one-hit wonders inexplicably given a million dollars on the strength of how spiky their hair was, there were legends being made.

It’s hard to pinpoint a handful of moments that fully sum up a genre/movement/era as nebulous as nu-metal, and embody the combination of silliness and seriousness, of artistry and commerce.

Korn’s Freak On A Leash was a massive tune for a lot of reasons – it’s at once aggressive, weirdly sexual and catchy as hell. But the bit that really grabbed the world by the cojones was the moment in the (excellent) video where lead singer Jonathan Davis stops a bullet mid-flight by producing what academics have dubbed a “nonsense utterance”. (The lyrics site Genius gives the words to this part as ‘Boom na da noom na nanema!’ followed by 11 rounds of ‘Da boom na da noom na namena!’, a ‘Go!’, and four, ‘So fight, something on the ming-a-boo, fight, some things they fight.’)

Disturbed’s David Draiman, he of the previously big-ass chin-rings, gave the world one of nu-metal’s most iconic noises at the beginning of Down With The Sickness, briefly going full monkey. The frontman says the noise was an animalistic response to drummer Mike Wengren’s ‘tribal’ beats, and was helped by lasting effects of vocal cord surgery to treat acid reflux.

In 2004, to promote their Chicken Fries, Burger King unveiled a masked ‘rooster metal’ band called Coq Roq. The following year, Slipknot sued the fast-food chain for copying their style, claiming they had been approached to be in an ad for them but turned it down. Burger King counter-sued, claiming that Coq Roq were parodying a general trend in metal to wear masks – citing KISS, GWAR and Mushroomhead – and claimed that Slipknot themselves were a parody act, suggesting they had lifted their look from Mushroomhead. Both suits were eventually dropped.

Mudvayne Win An Award With Bullet Holes In Their Heads

When Mudvayne’s Dig won the first ever MTV2 Award at the 2001 VMAs (beating Gorillaz, Alicia Keys, Jurassic 5, Craig David and India.Arie), the band went onstage to collect it dressed in matching white suits with bloody bullet holes in their foreheads. It was pretty disturbing, at an awards show that was most famous for Britney Spears dancing with a snake, and showed how mainstream nu-metal had gone. Just five days later, however, 9/11 happened, and a lot of aggressive music was blacklisted from radio play.

Snot would in all likelihood have been one of nu-metal’s biggest names if not for the tragically young death of lead singer Lynn Strait, who died in a car crash in 1998 at just 30. However, his most nu-metal moment probably came earlier that year, when he was arrested for indecent exposure on the Ozzfest tour after emerging fully nude from Limp Bizkit’s 13-foot prop toilet.

Sometimes uncomfortable with how obnoxious they were, and sometimes just outright offensive, but Limp Bizkit were just showing off in Hot Dog – the first song on Chocolate Starfish And The Hot Dog Flavored Water. Fred Durst drops a huge amount of f-bombs, leading to the Shakespearean-level couplet, ‘If I say fuck two more times / That’s 46 fucks in this fucked-up rhyme.’ The final fuck-tally by three minutes 50 seconds? Forty-nine.

Evanescence Have A Bad Rap Forced Upon Them

Nu-metal’s gender politics were never great. While Evanescence were recording their debut album, lead singer Amy Lee was told that the single Bring Me To Life would flounder without a more masculine voice on it. "It was presented to me as, 'You're a girl singing in a rock band, there's nothing else like that out there, nobody's going to listen to you. You need a guy to come in and sing back-up for it to be successful,’" she later recalled. The manly rap, courtesy of 12 Stones’ Paul McCoy, is not good.

Woodstock ’99 Gets Completely Out Of Control

While the first Woodstock in 1969 was ostensibly a celebration of peace and love, Woodstock ’99 was a lot more heated, in every sense. Concertgoers were charged exorbitant rates for water until they ended up breaking pipes, while a lack of shade led to widespread heatstroke. Several bands’ sets ended in violence, and candles distributed for anti-violence vigils ended up being used to start large fires.

Beginning in 2000, the Anger Management Tour was a multi-year, multi-band, multi-genre beast headed up by Eminem, Limp Bizkit and Papa Roach, and featuring various rotating massive names from the worlds of hip-hop and metal. Marilyn Manson, Snoop Dogg, Linkin Park, DMX, Rob Zombie, Ludacris… The walls between the two genres were coming down (just like in that Run-DMC/Aerosmith video).

Shifty Shellshock Gets A Number One In 15 Countries

‘Come my lady. Come, come my lady. Be my butterfly. Sugar! Baby!’ Butterfly by Crazy Town might have been very silly, and featured a video where Shifty Shellshock’s star tattoos come to life and fly around, but it was colossal, topping charts all over the world.

Linkin Park Get On This Internet Thing Early

Between various efforts including their remix album Reanimation and Jay-Z collaboration EP Collision Course, Linkin Park really made it difficult for people to level any of the easy criticisms of nu-metal at them (not that it stopped anyone). Their debut Hybrid Theory remains the best-selling rock album of the 21st century, and they’re the only rock group to have won the GRAMMY for best Rap/Sung Performance. They were also shrewd as hell, choosing their name’s unorthodox spelling because the domain name linkinpark.com was available, the kind of forward-thinking that makes bands, well, enormous.

Everyone Fights Backstage On The Tattoo The Earth Tour

Between 2000 and 2002, the Tattoo The Earth Tour – in which members of Slipknot kept passing out due to overheating – covered the continental U.S. with 34 bands and 42 tattoo artists. Backstage at one show, Slipknot’s Shawn ‘Clown’ Crahan and One Minute Silence frontman Brian ‘Yap’ Barry ended up getting accosted by security after refusing to stop driving around in a golf cart making obscene gestures. When the fracas began – which included Shawn being sprayed with mace – in jumped all of Hatebreed. If there’s a more nu-metal image than a visionary clown running amok in a golf cart flipping the bird before getting maced, we’d love to see it.

It was the obvious choice – soundtracking a film set in Egypt 5,000 or so years ago, surely you pick nu-metal. What says ‘Let’s build a pyramid!’ better than Drowning Pool? The runaway commercial success of a few massive acts led to umpteen imitators being signed, where suddenly every wrestling entrance, action movie trailer, video game and sports montage was accompanied by angsty rapping about absent dads.