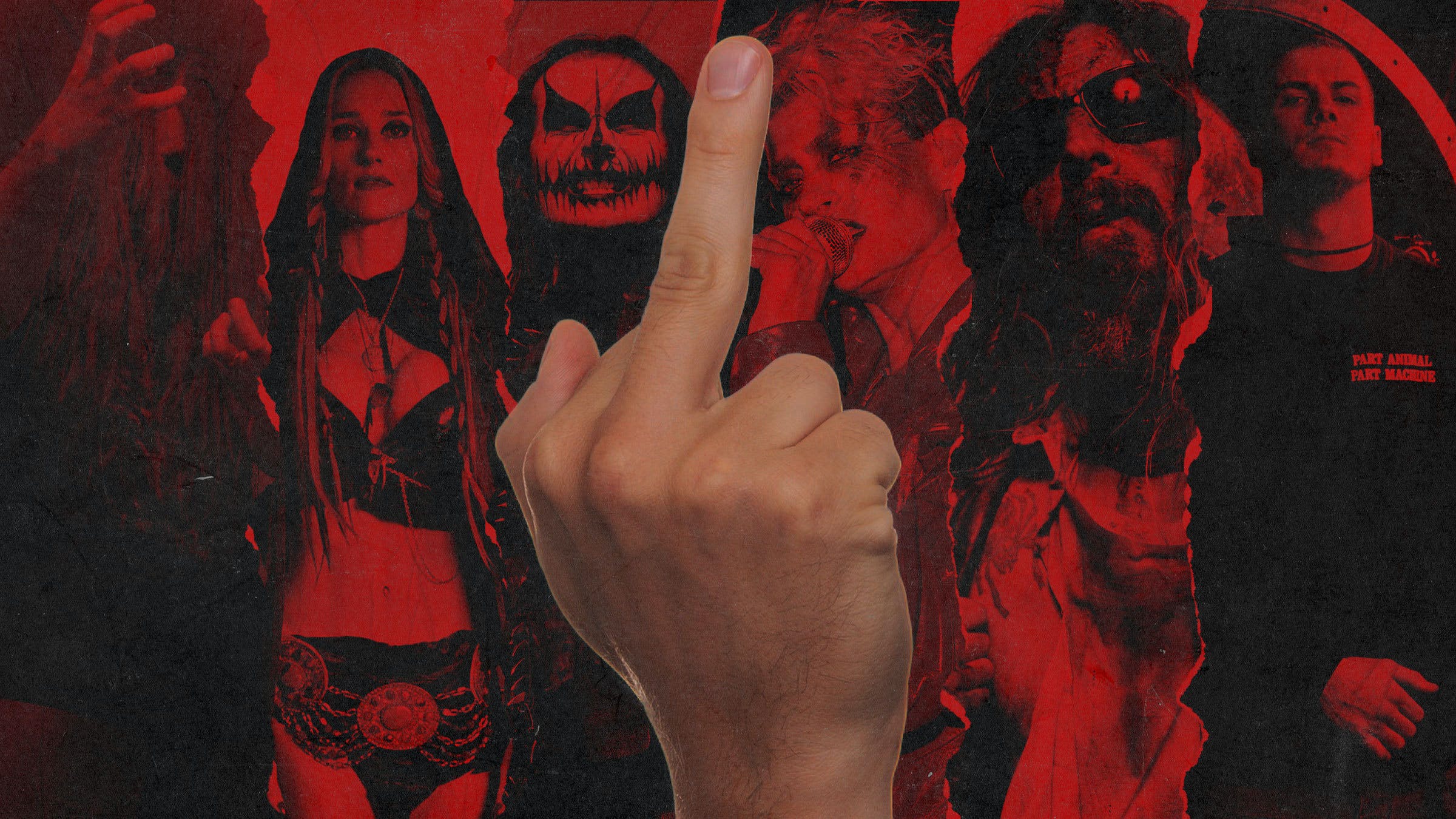 All profanity has a special place in the hearts of rock, punk, and metal fans. There's something about a word that crosses the boundaries of courtesy and politeness – that causes an instant gasp in prudes and oversensitive parents – that makes fans of rebellious music just want to revel in its power. But while 'damn' is old-school, 'shit' is good, and any of the descriptors for genitalia are great fun, there's one dirty word that lives in a class of its own, and that's the F-word: FUCK.

Whether it's the reaction it inspires in tender people or the raw, beautiful sensation of saying it, 'fuck' will always be the crown jewel of dirty words. That also means it'll be the word that gets a musician censored quickest by major chain stores, which is why a lot of artists don't include it in their album or song titles. However, many intrepid bands and performers have decided to throw caution to the wind and express their vulgar tendencies out loud for all the world to see. And for that, we salute them.

Here are the 15 best songs with the word 'fuck' in the title. Don't like it? Fuck you.

Co-written by none other than Motörhead’s Lemmy, Huntress's I Want To Fuck You To Death might be about a supernatural monster, but it might just be about wanting laid. The lyrics contain so much hunger and thirst imagery that it has an inherent steaminess to it that can’t be denied. That it's sung by the beautiful – and tragically deceased – Jill Janus only adds to its power.

While ‘fuck’ is a good dirty word and interjection, it’s also important to remember how scathing and venomous it can sound. No band gets that down harder than two-person black metal act Anaal Nathrakh, whose songs contains no discernible words other than the title. That said, Genius claims the song was inspired by a vision had by Dave ‘V.I.T.R.I.O.L.’ Hunt that involved street-people fucking pigs and fire everywhere, so it’s not just a clever title.

Werewolves of London singer Warren Zevon has always been able to write about dark, real-life subject matter in a sardonic, relatable way. But when he got diagnosed with terminal cancer, even he was thrown for a loop as to how to tackle it. Shaken by the news, he fell off the wagon after 17 years of sobriety, and then promptly wrote My Shit’s Fucked Up: a blunt, matter-of-fact, cautionary tale in the form of a haunting Americana song about the futility of life. 'Rich folks suffer like the rest of us – it’ll happen to you,' he says pointedly, as if he’s looking directly at the listener and saying, “You’re gonna die.”

Adolescence is where the joys of screaming 'fuck' truly begin, and Godsmack wrote the ultimate anthem for swearing teenagers. I Fucking Hate You is about as simply pissed-off a song as you can find, and its straightforward approach and snotty tone make it feel gloriously immature. Even adults need moments where they reconnect to the no-fucks-given attitude of their youths, and this song is like a teleporter that takes one instantly back to an age where they're enraged without nuance. Deep down, we are all Kyle sometimes.

11. Cradle Of Filth – Of Dark Blood And Fucking

Featured on their late-’90s breakthrough EP From The Cradle To Enslave, this Cradle Of Filth rager shows a rare side of Britain’s biggest black metal band. Instead of lilting gothicisms that suggest ruffles and dead roses, there’s just a speedy, primal thrash tune with synths used to instill panic rather than romance. Sure, its breakdown involves lyrics about being succoured by a succubus, but hey, this is Cradle Of Filth we're talking about.

'This dick is so sick / We could start a family.' Lovely. Weirdo electro-punks Mindless Self Indulgence officially go full dance hall anthem with this big, hilarious track. Frontman Little Jimmy Urine (just lovely) forsakes his usual squeak and squeal for giant WOAHs in the chorus, but still manages to drop enough perverse, filthy gems throughout the song to keep MSI fans slavering. One of the tracks on this list that might be good for actual fucking.

9. Propagandhi – Stick The Fucking Flag Up Your Goddamn Ass, You Sonofabitch

In every conceivable way, this track from Propagandhi’s 1993 debut How To Clean Everything sums up the band’s mission statement. There’s the shifts in rhythm, the high-octane punk riffs, the sneering spoken-word sections, and the framing of what we’ve been taught against what is real. And then, of course, there’s also a spit-flecked, profanity-filled condemnation of all the bullshit our governments shove down our throats.

Let's go back to the primitive. By 2000, nu-metal was firmly established, and Soulfly seemed to understand that the genre needed a track to represent the music's live experience. The result is this aggressive, bounce riff-driven song that sounds written specifically for leaping up and down on the balls of your feet. Corey’s slow, creeping verse parts are nice, but are really just precursors to when he and Max scream the title.

We all knew GG Allin would be on this list. This grimy punk track is a terrific anthem for a horrible night out with the boys. On top of that, it’s the song that declares GG’s MO, basically outlining his favorite activities and the nihilistic lens through which he performs them. Probably not great for actual fucking, but certainly a good one to put on at the bar when the bachelorette party shows up.

Few bands do a big, grin-backed middle finger quite like White Zombie. On the opening track of 1992's La Sexercisto: Devil Music Vol. 1, the garage metal quartet play the kind of song that immediately makes the listener feel sweaty, thirsty, and socially radioactive. This one might not be the most vicious or angry track on this list, but it's certainly one of the best songs for telling society, authority, and the owner of this specific liquor store to go fuck themselves.

5. Peaches – Fuck The Pain Away

The soundtrack to a million lap dances. What makes Peaches’s first big hit so awesome is that, while dirty, it’s not especially tawdry or misogynistic, and has a mature appreciation of its topic. There’s an understanding of fucking here that goes deeper than your typical erotica; it seems to have a grip on the psychology behind being an everyday sexpot. Of course, the grinding, endless bassline behind the lyrics certainly helps.

4. Cannibal Corpse – Fucked With A Knife

“This one goes out to the ladies…” That’s how George 'Corpsegrinder' Fisher introduces this Cannibal Corpse classic when the band plays it live. As maniacal a death metal song as you can find, Fucked With A Knife shows just how fast and insane Cannibal can get. It’s also an awesome illustration of their special place within the genre: it takes a really horrific concept all horror fans have imagined deep down (hey, Lemmy even mentions it in Blackheart) and puts it to music.

Truer words were never spoken. The Dead Kennedys’ ultimate anti-skinhead anthem ranks so high on this list in part because it’s the kind of rabid, wily hardcore song that few other bands could pull off so well. But the real power here is the subject matter, and the fact that Jello Biafra and co. didn’t feel the need to sugarcoat their distaste for the racists infecting punk rock in the ’80s. Shove that fucking armband up your asshole, loser.

Hell yes. Not only does this track from Pantera’s 1992 sophomore gem Vulgar Display Of Power have ‘fuck’ in its title, but it just feels like screaming the word ‘fuck’. It’s easily Pantera’s fastest, most frantic song, and its lyrics deal with all the confusingly awful bullshit that seems to plague your average metalhead's everyday life. On top of that, it goes by in a flash, and the last chorus involves Phil screaming, 'FUCKING…' with increasing intensity. What else can be said, other than the obvious: Fuck yeah, boys.

All proceeds from Tenacious D’s The Who 7” will be going towards gun violence-ending charity Everytown.