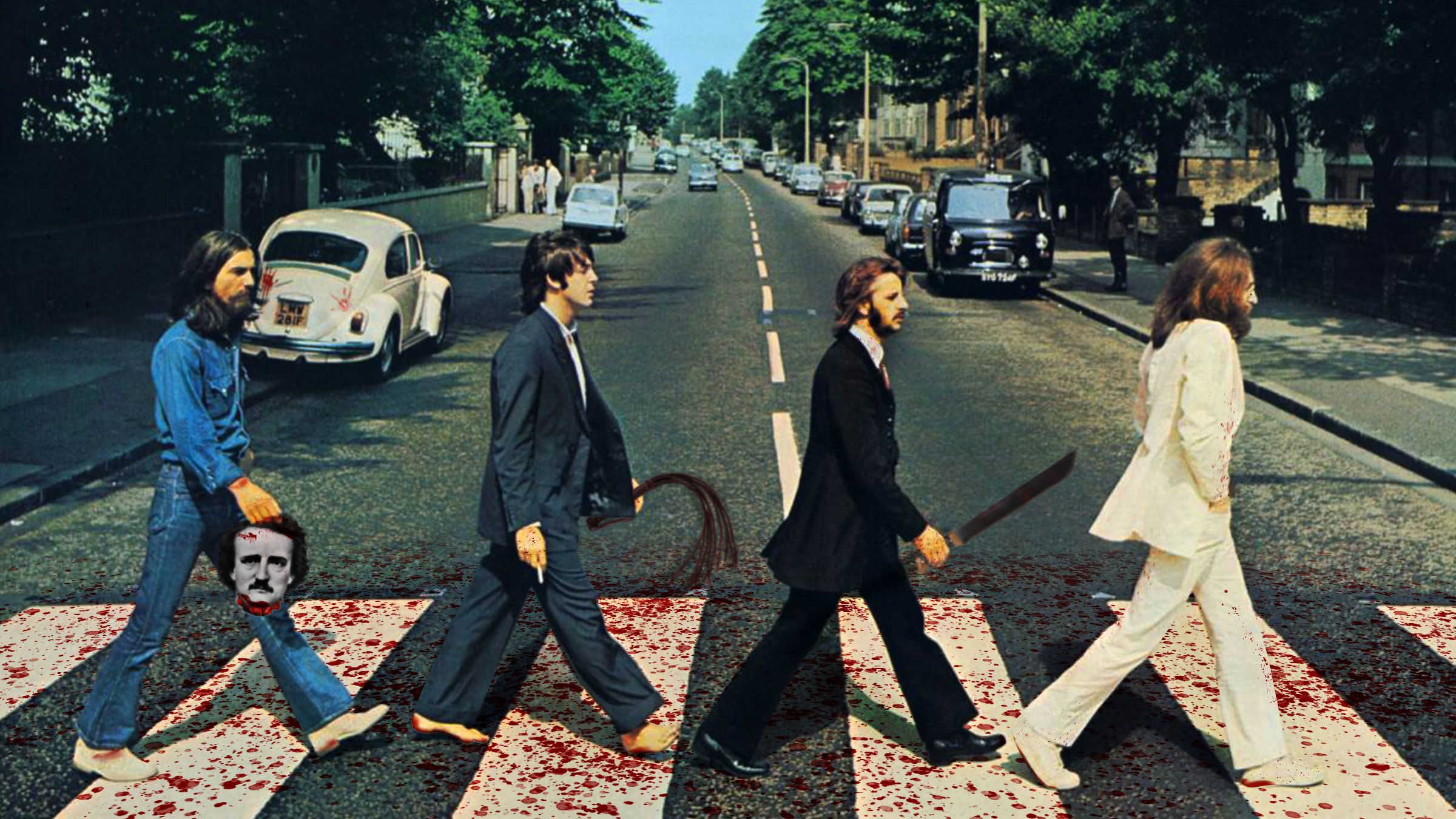 Rock history has rather unfairly rewritten The Beatles as omniscient free love gurus. This is unfortunate because it both alienates fans of more aggressive musical styles who are told that The Beatles aren't for people like them, and because it neuters the boys from Liverpool's legacy by treating their music as loftier than street-level rock'n'roll.

But it's all bullshit – The Beatles were dark, difficult weirdos, introducing the world to menacing acid fantasies and telling America they were bigger than Christ himself. In his autobiography, Motörhead's own Lemmy Kilmister – an avowed Beatlemaniac – laid it down: "…The Beatles were hard men too. Brian Epstein cleaned them up for mass consumption, but they were anything but sissies… Ringo's from the Dingle, which is like the fucking Bronx."

That bassline, that kick drum, that crashing chorus… Come Together is a banger. Makes sense, given that the song was initially written as a campaign anthem for acid guru Timothy Leary. That it debuted towards the end of the ’60s also feels fortuitous, as though The Beatles were beginning to feel the ambient heaviness of the era that would later be gripped and run with by bands like Black Sabbath and Deep Purple. Then, of course, there are the lyrics, with John Lennon singing, 'Hold you in his armchair, you can feel his disease.' Jesus, what is this, a Morbid Angel track?

Fucking. That will forever be the cardinal sin of which pearl-clutchers will accuse The Beatles, from the moment they sang about holding hands. You can argue all you want that Why Don’t We Do It In The Road? is about anything other than the beast with two asses – but come on, what’s happening in the road, a Bible study? As such, this track from the White Album is the late-’60s equivalent of a Mötley Crüe track, wantonly celebrating the human body and its many acrobatic positions. Hey, no-one will be watching us!

Read this: 9 of the craziest crusades against rock and metal

If there’s any song that heralds the dissatisfaction of the ’50s officially coming to a head in the ’60s, it’s this one. Full of melancholy strings and eerie gang vocals, Eleanor Rigby thrives on the unhappiness of the everyday, and the harsh reality of how helpless and confused we all feel – basically, the principles on which heavy metal was founded. There’s also a lyric about a face being kept in a jar, which bridges the gap between the Fab Four and the Black Dahlia Murder. A powerful anthem for the lost, the weirdos, the psychos and outcasts – all the lonely people.

It’s easy to forget how hard the opening track of Sgt. Pepper shreds. The chugs and guitar accents that kick off the song sound written for headbanging, and Paul’s vocals have a harsh edge to them that feels crazier than your average psychedelic love-in. But the stand-out performance here might be Ringo’s, whose kick-snare alternation is powerful as all hell, and who gives the song its straightforward march. Good thing these guys met Bob Dylan, or they never would’ve gotten high enough to write an album like this.

One normally thinks of Helter Skelter as metal because of its association with the Manson Family Murders and the several heavy acts who have covered the song due to that relationship (Mötley Crüe, Soundgarden, Rob Zombie and Marilyn Manson to name a few). But even without that dubious association, the track slays. Its guitars are noisy, its vocals are totally unhinged, and the drum build at the beginning provides the kind of kick that plenty of extreme metal bands would kill their dog to write. In all honesty, the Manson reference is kind of a slight against this banger of a track – fuck that maniac, listen to them riffs!

You can hear the news report now: "One night, Maxwell Edison, a medical student, contacted his classmate Joan and invited her to the movies. Thus began a spree of brutal bludgeoning deaths that shocked and horrified this small college community." Maxwell’s Silver Hammer may sound like it’s performed by a clown with cymbals strapped to his knees, but its subject matter is the grisly murder of women at the end of the day. Certainly not metal in style, but so absolutely terrifying that it might earn an honorary degree.

Okay, so Birthday is… well, it’s Birthday. It’s the song you listened to at your seventh birthday party in an attempt to feel cool. But man, listened to as just a rock song, with no cake involved, this one slays! The guitar and bass just charge from the get-go, and Ringo’s drumming feels especially wild and intense. Then you got Paul shouting about how he wants you to dance – a battlecry that guys like Lemmy and Phil Lynott know all too well. We hear you, it’s Birthday, but man, what a blast.

When it opens, I Me Mine already has a spooky fog about it, with its melancholy tones and haunting organ. But it’s the chorus, with its wild guitars, shouted gang vocals, and stomping rhythms, that make the track sound like something Uncle Acid And The Deadbeats could’ve written. The two halves of the song complement each other, making this as relevant to doom heads as it does to thrash kids.

Languid and mysterious, I Want You (She’s So Heavy) could have easily been on any Alice Cooper or Pentagram album. The fact that The Beatles also use to song to scream the word 'HEAVY!' certainly helps, and the gang vocals of the 'She’s so-' lead-in feel like a precursor to thrash metal. It’s no wonder that this one got covered by Type O Negative – though its sonic profile says classic rock, its vibe says pure gothic doom.

Read this: The 50 heaviest albums of all time

'She said, "I know what it’s like to be dead…"' That’s the opening line of this far-out number from Revolver. Though it sounds like a journey to India on LSD, She Said She Said’s lyrics paint a distinctly dark picture of the ills of the world slowly infecting an otherwise innocent soul. Not only that, but the guitar tone is steelier than that of most Beatles tunes, which only increases the song’s ominousness. If there’s one thing heavy metal knows, it’s that life ain’t a fairytale.

The message of Being For The Benefit Of Mr. Kite! Is simple: you’re going to get stabbed by a clown. The strung-out circus atmosphere of this track from Sgt. Pepper’s has all the terror and bummer of a bad trip. It’s especially noticeable the organ-fuelled breakdowns after the second verse and at the very end which make the listener feel like they’re trapped in the climax of a Ray Bradbury novel. We’d like to get off, now, please.

It’s not simply the creepy closing lines of this track from the White Album that makes it metal. There’s an air of overcast bummer surrounding this one, provided by the minor chords throughout, the snarling guitars before the pre-chorus, and the monotonous rumblings about needing a fix. This exhaustion with the world of The Beatles at the time – watching the violent, apathetic, and dissatisfied underbelly of the hippie movement rise to the surface – that would later fuel metal’s explosion. Bang bang, shoot shoot.

Wow, what the fuck, John? Run For Your Life will forever live as The Beatles track that gets explained away with death metal’s time-honoured ‘just a horror story’ excuse. The song is all about ‘a wicked guy’ who ‘was born with a jealous mind’ threatening his girlfriend if they ever catch her screwing around. But man, the hard D on the end of the line, ‘Let this be a sermon, I mean everything I said / Baby, I’m determined, and I’d rather see you dead’ certainly deserves a shudder or two. And you wonder where pornogrind bands learned it from.

Read this: How brutal death metal is dealing with its misogyny problem

Most of the Fab Four’s earlier stuff is a little cutesy to ever be considered metal. But fuck it – Twist And Shout rocks, acting as the closest The Beatles get to Van Halen. It’s a fast bop-along track that urges a lust object to dance like made, because it’s 'got [you] going'. Roll your eyes all you want, but your grandpa got paid and laid to this number.

I’m freaking out, man! Revolution #9’s unsettling medley of haphazard music, repeated phrases, and overheard sounds feels artsy to the point of being ridiculous (plus, you got that Simpsons parody to consider). But the overwhelming paranoia and weirdness of the track can be found echoed in some of metal’s weirder niches, like Pig Destroyer’s ambitious grindcore and Marilyn Manson’s between-song interludes. Put this on, drop a tab, and lose your goddamn mind.

"If you fart, admit it." As if you weren’t already excited enough about What Drives Us, here's a nice clip about flatulence…

10 Bands Who Have Been Banned By The Church

Screw Sunday mass -- here are 10 rock bands whose concerts and songs were banned by religious authorities.