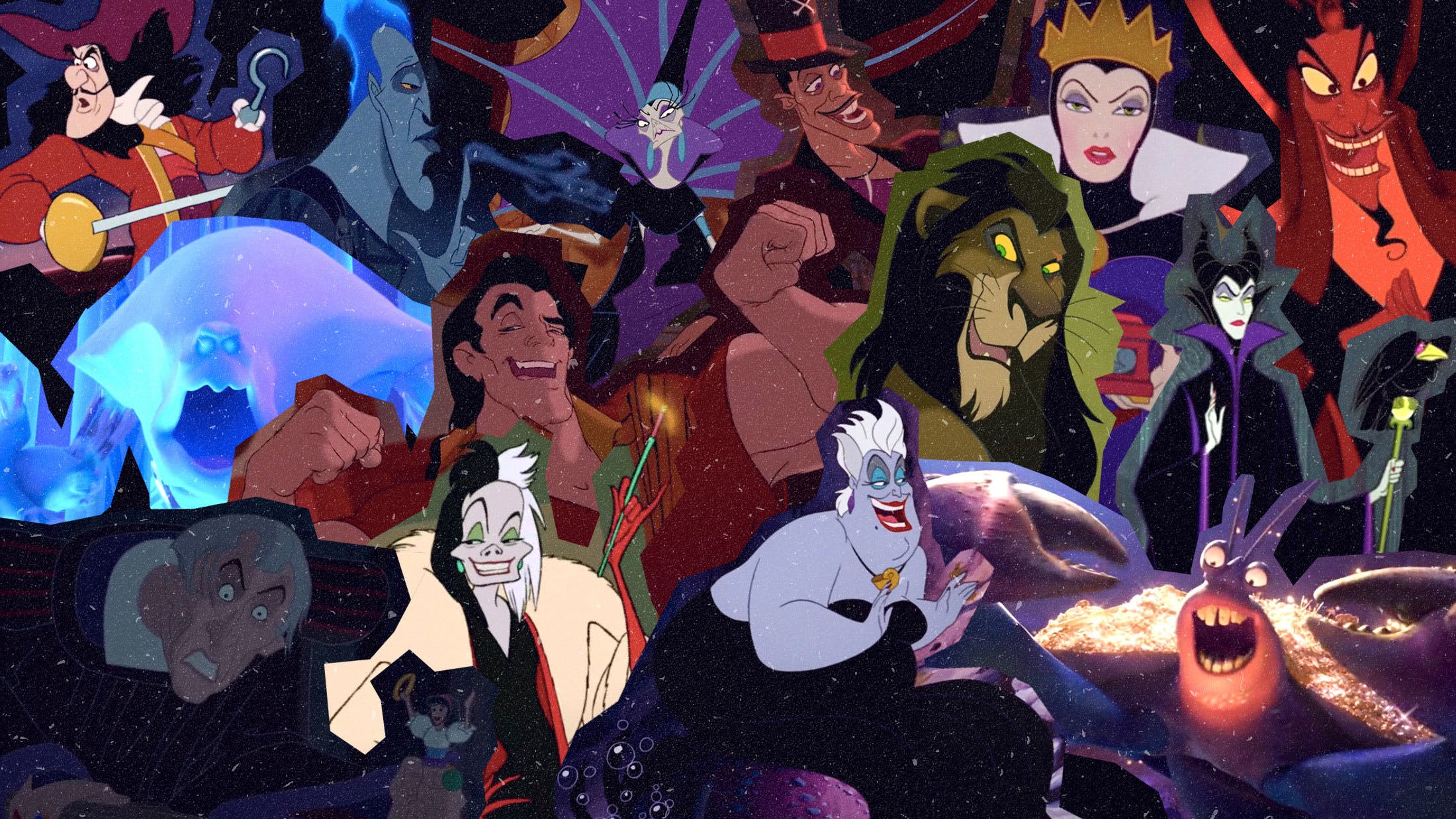 The baddies in Disney movies are the first experience a lot of children have of pure, abject evil. But the thing with pure, abject evil is, it’s kinda rad? Not evil in the sense of the shitheads that populate the news, but big cartoonish wickedness for wickedness’ sake – that’s the good stuff. You’d never get Scar from The Lion King sending shitty tweets about poor people, or Ursula from The Little Mermaid nicking a lectern from the Capitol – that’s not evil, it’s being a dick.

But which of these proper villainous animated scumbags is the most metal?

20. Judge Frollo from The Hunchback Of Notre Dame

Ooh, he’s a rotter. Frollo has a complicated relationship with morality, willing to behave like a murderous shit in order to maintain his own peculiar interpretation of God’s will. He’s an interesting figure before – as the film goes on – becoming a much less interesting horn-crazed maniac.

Tamatoa is an impressive specimen: a shiny giant with jewellery all over his shell. He’s also a real rotter, and once ate his own grandmother. While he’s literally part metal, covered in gold and treasure, when you mix it with the bioluminescence and rage he’s sort of… crunkcore? Remember Brokencyde? He’s that.

Pirates are pretty metal – they drink a lot, wear stupid hats and fight each other with cannons. Great! There are a bunch of bands who are fully committed to the salty seadog gimmick, but there’s something about Captain Hook that just seems a bit too clean. He’s not a rotten-toothed grime-covered grog-swiller, he’s got a big posh feather on his head.

17. Yzma from The Emperor’s New Groove

Yzma’s main thing is that she’s so permanently angry that she dedicates quite a large chunk of her time to hitting stuff with hammers. That’s pretty metal.

16. Percival C. McLeach from The Rescuers Down Under

Voiced by George C. Scott of Patton fame, Percival McLeach is an outdoorsman. Replace his single-minded obsessiveness with killing rare animals with a similarly all-encompassing love of weed and there are hundreds of sludge bands he could waltz into.

The sneering! The shoulder-pads! The staff shaped like a cobra’s head! This is all great stuff, Jafar. Great, great stuff.

14. The Queen from Snow White And The Seven Dwarfs

The Queen has that amazing presence some people have going on, where they are recognisable just by silhouette, perfectly symmetrical in every pose and just radiating look-at-me-I’m-ace vibes. Plus she has a pet raven (pretty metal) that hangs out on a skull (extremely metal) and occasionally transforms into an elderly crone with bonkers eyes in order to curse people (at least 4Ks metal).

Marshmallow isn’t Frozen’s main villain – that would be the double-crossing slimeball Prince Hans, who commits full Disney sacrilege by lying while singing, which is unacceptable. Marshmallow is a mindless chunk of ice created by Queen Elsa to keep people away from her, and has the same kind of monstrous simplicity as something like Metallica’s Scary Guy logo. With a few tweaks (less snow, more spikes, maybe a leather jacket?), you can see him being adopted as an Eddie kind of figure, drawn badly on pencil cases across the world.

12. Gaston from Beauty And The Beast

Barrel-chested egg-downer Gaston is ripped as all hell and sports the kind of ponytail that never goes out of style… because it’s never been in. He’s got the kind of arms you can only get by working out to Hatebreed. It’s just the red top letting him down, really – stick him in a big black coat and you’ve got the keyboard player from the fifth band on at Bloodstock.

11. Ratigan from The Great Mouse Detective

Ratigan seems like a debonair mouse-about-town, sporting a cravat and cigarette holder, but transforms into a terrifying savage. It’s like when you see an interview with a dude from a band and they’re all urbane and loquacious, then they go onstage and scream like an angry beast.

Chain-smoking and black-clad with excitingly asymmetrical hair, Cruella De Vil should manifestly front a band. While animal cruelty has no place in the rock world, she could surely find a new hobby. In promo photos from the upcoming live-action origin story Cruella, Emma Stone’s young incarnation of the character looks like she’s in a New Years Day tribute act.

8. Ursula from The Little Mermaid

What’s more metal than a singing octopus? An evil singing octopus with a command of black magic. Combining a stadium-filling voice with a Lovecraftian tentacled physique, Ursula is a Cecaelia, a rad kind of underwater octoperson with a hell of a set of pipes.

7. Scar from The Lion King

Sporting a big black beard, an impressive baritone and a theatrical flair – transforming from elegant to livid in a heartbeat – Scar is the only animated lion you can imagine Bruce Dickinson being pals with. Claws aren’t a million miles from fencing, after all, and while Scar’s story was inspired by Claudius from Shakespeare’s Hamlet, The Evil That Men Do has its title taken from a speech in Julius Caesar. They’d be mates!

6. Dr Facilier from The Princess And The Frog

Sporting a Slash-esque top hat and a vaguely Wyld Stallyns-like crop-top, Dr Facilier is a New Orleans witch doctor with a sentient shadow who keeps his mum’s shrunken head on a shelf. Theatrical, charismatic and accessorised to within an inch of his life, he’d be the kind of dude that, if he were fronting a band, would do a magic trick during an extended bridge.

Sure, he’s voiced by James Woods, a truly terrible bastard, but he’s also Hades, god of the underworld. Some extremely metal people have proclaimed themselves gods in the beloved Camden venue The Underworld, you know? Hades is covered in fire when angry, but, in a very metal twist, is still pretty much on fire when not angry – just a different kind of fire. It’s good stuff, fire. Very metal.

4. The Queen Of Hearts from Alice In Wonderland

There was a pretty incredible figure in metal who took a playing-card motif a long way, and the Queen Of Hearts has an obsession with decapitation on top of that. If there’s a more metal description of a character than “like a more violent Lemmy”, we’re yet to encounter it.

Frequently found in dragon form (very metal), and sporting a set of cheekbones in human form that make Andy Biersack look like he’s not even trying, Maleficent trots around wearing big silly horns and is accompanied by a raven named Diablo. It’s good stuff. She’s sinister, devious, glacially beautiful and dressed in a way that could simply be none more goth.

It’s odd that Fantasia is a film mainly remembered for some cute dancing brooms and Mickey Mouse in a wizard’s hat when it co-stars Satan. Chernabog, named after a very Satan-like Slavic deity, features in the penultimate sequence of the film, summoning evil spirits and restless souls – hanged criminals and the like – to swirl around him while he leers like a maniac and flings a few of them into hell just for the fun of it. He then transforms into a mountain, quietly waiting for the next time he can emerge and fuck shit up again. So, so, so metal.

1. The Horned King from The Black Cauldron

The Black Cauldron isn’t the best-known Disney film, but it’s metal as shit. Taking place in a world based on Welsh mythology from the Dark Ages, it’s chockablock with psychic pigs, vicious dragons and horny witches, and had to be heavily edited due to graphic, disturbing violence. Metal metal metal metal metal. The villain, the Horned King, is full-on scary, all rotting flesh and skeletal grin, voiced by the late John Hurt and casually making incredible proclamations like, “Now I call on my army of the dead: the Cauldron Born! Arise, my messengers of death! Our time has arrived!” In his final moments, the titular cauldron sucks what is left of his flesh from his bones, and as he curses everyone with his dying breath, his skeleton explodes. Fuuuuuck yes.