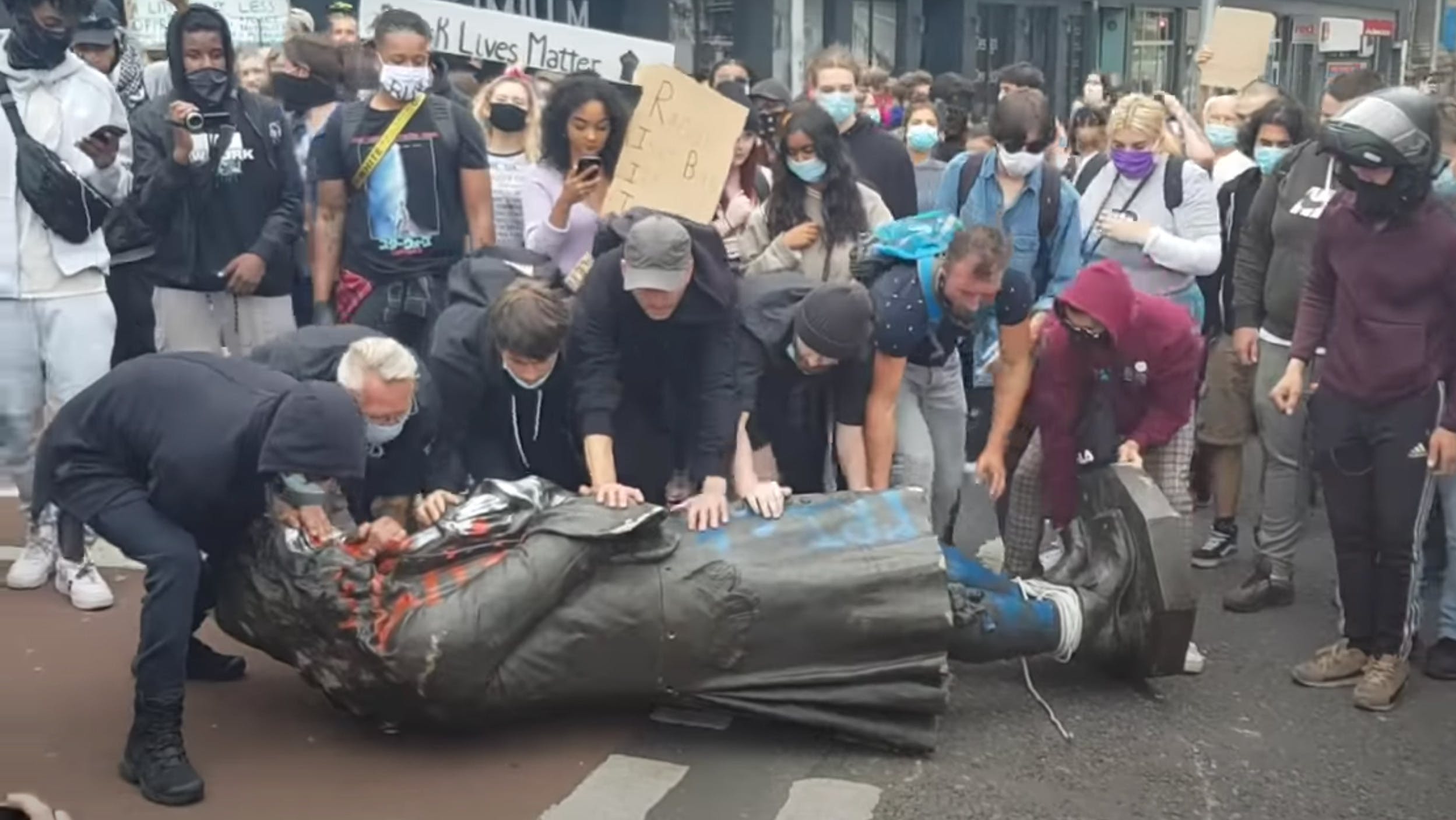 Following global demonstrations in support of the Black Live Matter movement and the toppling of a statue commemorating slave trader Edward Colston in his hometown, the Bristolian punks’ fiery frontman stresses the importance of remembering that racism isn’t an exclusively American problem.

I’ve always been aware that Bristol was a slave-trading town. I didn’t grow up in the city, but over the years I would pass through sporadically before moving in and you would see the signs. There are pockets of old pubs and buildings that used to be slave houses. There are roads named after certain points in history related to the slave trade. There are even underground structures where slaves used to be housed.

What I wasn’t aware of is how dangerous the day-to-day [normalisation] of that history can be – constantly being presented with the names of these slave traders, owners and murderers. I never thought of it as something dangerous. But, recently, I thought again, as a father, about having to explain to a child why there are still all these places named after the slave trade in this place we call home. How do you justify that?

It was brilliant to see what happened at the weekend. I was actually the only member of IDLES not out protesting. I was filming, but everyone was in their respective cities: Lee in Hamburg, Bowen in London and the other boys in Bristol. I think that the ability for [people with righteous messages] to have a platform and organise demonstrations is one of the greatest positives to come out of all this noise of the internet age. When I saw the scenes from around the world and the statue of Edward Colston being thrown into the water in Bristol, I thought it was such a positive reaction. Hopefully it will be the beginning of a long conversation about civil rights across the world.

People seem to think racism is this foreign problem, but the idea that Black Lives Matter should be an exclusively American movement is completely wrong. Racism isn’t a problem only in the United States. In many ways, [Britain] started slavery. The problem is still there. The killing of Mark Duggan [a 29-year-old of Afro-Caribbean/Irish descent] by police in Tottenham in 2011 proved that. There hasn’t been any huge dip in stop-and-searches for people of colour, any major change in race relations or significantly more equal opportunities in the nine years since. There is still systemic racism throughout the public sector and in government.

It’s true even in Bristol. Do I see an irony that our hometown – one of the most liberal cities in the UK – continues to struggle with these remnants of its Imperialist past? To fully address that, you need to understand why we’ve become such a liberal centre. Education, integration and empathy are key to our multiculturalism. There is still racism here, but there is acceptance. We have a long history of [European] and Afro-Caribbean people and cultures integrated into our city because of that history as a major [people trafficking] port. The more we integrate, the more we can have some kind of egalitarian existence.

The real irony lies in the fact that it took the public to pull down something that should have been taken down by our political representatives years ago. It’s a celebration of something ugly and oppressive and wrong – on a plinth. That’s fucked.

On the other hand, a lot of people are up in arms about the destruction of these relics from our past. It’s that desire to conserve a status quo that’s at the heart of conservatism. Conserve the dream. Protect the attitude that nothing should change. Ultimately, though, there needs to be a balance between remembering that history and commemorating it. It’s important to remember where we’ve come from, but that doesn’t necessarily mean we should celebrate it. Statues are celebratory things. They’re not educational tools; they’re commemorations of their achievements and their significant place in history.

People need real education, with information taught in schools and displayed in museums. Education helps us understand our privilege. But there is a shortfall in our curriculum in that it skips over so many of the dark parts of our country’s past. We study the Tudors and the Stewarts, then we jump to winning World War 2 and that’s it. It’s a one-sided portrayal that only shows us in a positive light. We need a more even-handed, in-depth study on our accountability as a white, Christian country and what we did. We have statues to [tyrannical 17th Century statesman] Oliver Cromwell, which I don’t agree with, but we should be educated on what he did. If we had that kind of education, there would be less need for apologists and more room for empathy and understanding. The more understanding of those past events we have, the better our ability to make the right changes.

The need for that understanding and change is more urgent now than ever. The whole Brexit campaign is representative of and dependent upon nationalism and that weird, sinister nostalgia for a Britain that never existed. When people say they ‘want to make Britain great again’, which Britain are they talking about? If they’re referring to the Empire, it was a regime based on brutality, genocide and the dissolution of cultures across the globe under the guise of Christianity. Are they referring to Churchill, who was a successful warlord, but [deeply problematic in many other ways]? From the days of Cromwell [our leaders] have been the cause of so much suffering. The blood is on our hands in history, and to look back on that with any kind of nostalgia is dangerous. Nationalism is always dangerous because it always links to xenophobia and the fear of the other. That mindset of ‘them and us’ is not something we need in 2020.

So much is intentionally skipped over because it makes us question things: our privilege, capitalism, the class system, why the fuck we still have a royal family. If you look at things with a truly egalitarian eye, you can’t help but want for change. But that’s not what the people upstairs want. Of course we should question our statues and our history. Critical thinking is creative thinking. That change will always mean taking some power from those people at the top and redistributing it out amongst the workers, which is something they will always fight against.

I believe we are in a position to make that change, though. These protests are just the start. A demonstration – or the toppling of a statue – is symbolic of the unrest from people who aren’t being listened to. It’s not empty symbolism, either. People need to be safe and fed and able to get a job. I’m white and middle-class so I can, but this government needs to represent everyone and black people, Asian people and migrants definitely aren’t seeing that. Responsibility and accountability need to be placed on our government – whether you voted Tory or not – to make the changes that the people need.

Beyond that, we need to maintain the mindset. Changing things isn’t the responsibility of black people, or other people of colour, or immigrants, or gay people. It is never the responsibility of the oppressed. It is the responsibility of the oppressors – and of those of us who are able to live comfortably to start questioning that comfort [and our own complicity]. If you want to stop violence in the streets, you need to stop police brutality. And that isn’t just about police killing people. It’s their day-to-day conduct. It’s stop-and-search, which is an unpleasant, invasive act that tells you to be submissive and that you are the property of these enforcers of a right-wing government.

There’s no piousness in our message, either. We’re applauding the toppling of Colston’s statue, but as a band, we’ve played at Colston Hall, without making a statement on whether the name should be changed. Maybe that was to do with our ignorance, or our privilege. If bands like us said to venues like Colston Hall need to change their name otherwise we won’t play there, they’ll make that change.

We all make mistakes. I still forget my privilege. I can still do a lot more. And I’m going to keep trying. It’s important not to attack people who are still trying. As long as we don’t forget about this in a week’s time – as long as we keep picking up on those micro-aggressions, maintain perspective and keep trying to be better – then we’re on the right track.