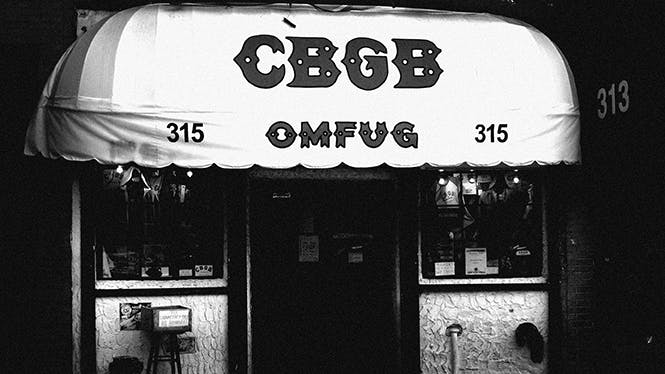 In this week's issue of Kerrang! we've gone big on the impact of 924 Gilman Street on the punk scene, in celebration of it being three decades since Green Day blasted through its doors. Elsewhere in the issue we've investigated how in recent times more and more live music venues are closing their doors and the repercussions that's having on rock and metal music. We spoke to a number of K! stars who kindly offered some words on their favourite venues, as a means of highlighting just how important these spaces are for the health and continued existence of alternative music.

BRYAN GARRIS, KNOCKED LOOSE
Growing up I'd go to Headliners Music Hall, for bigger scale shows. Unfortunately the people who run it now insist on a barricade or 18+ which isn’t cool for us. There was also Bulldog Cafe for smaller scale hardcore shows. I have a lot of good memories there. It was a shithole but it was our shithole. I mostly remember the fear when I was younger – being scared that I didn't know what was gonna happen next. That I could get hit or dove on. I also always loved meeting the bands. It definitely was a huge influence on the person I am and I would say that hardcore is still influencing me to become a better person today. These venues one hundred per cent made me who I am. If I never found hardcore or metalcore (whatever you want to call it) I can’t imagine the person I’d be. Probably a piece of crap.

ROU REYNOLDS, ENTER SHIKARI
We were lucky enough to play the Astoria (and LA2) a few times. It felt like one of a dying breed. It was a a venue with character, that I’d visited many times growing up and watched so many great bands play in. It had the smoke and sweat of a million shows in its woodwork, a far cry from the clean 'entertainment experience' that a of a lot of venues its size were becoming / have become. When you see the West End of London these days, the idea that there was ever a 2,000 capacity dedicated rock venue in the centre of town seems unbelievable.

HENRY COX, BOSTON MANOR
Sound Control is a venue I will sorely miss. Perfectly located in the heart of Manchester, it had three rooms ranging from 100-500 cap. I saw local shows and some of my favourite bands there. Boston Manor also played some of our earliest shows there – it was even the first venue our parents saw us play in. Sadly it was closed at the end of last year to be demolished for more student accommodation. As a former resident and university student in Manchester, I can tell you that student accommodation is not in short supply. More and more we’re seeing venues closed for mass housing projects or worse, noise complaints.

JUSTINE JONES, EMPLOYED TO SERVE
The Camden Unicorn was a venue that was vital to the beginning of Employed To Serve. When we first started out no-one would book us because they didn’t know who we were, so instead Sammy and I would book shows for our favourite bands and put us on as openers. There was one month where we almost played every week. I used to book my friend’s bands there when they had dates on their tours fall through as well. The best part about the venue was that it was always free entry, so no matter how skint you were you could make it down to watch some awesome bands, not to mention having more money to spend on merch. Two of the craziest shows I ever saw there was Full Of Hell and Magrudergrind – the crowd went so crazy that the ceiling was literally dripping with sweat. It's such a great place.

ASH COSTELLO, NEW YEARS DAY
There’s a venue in Anaheim California called Chain Reaction that has been hosting underground shows since the '90s. I started going to ska and punk shows there when I was around 14 years old. My dream was not only to play it, but headline it, which I have now done multiple times. Playing there feels like home. A lot of bands from around the world consider it an honour to be able to get booked there, and it's referred to as the CBGB of the West Coast. I still go to shows there. It's small – it maybe holds 400 at maximum, but playing there just feels so special.

For more of this kind of thing, you can pick up the new issue of Kerrang! in all good newsagents in the UK right now. Prefer to have it delivered to your door? It's also available to order online via this link.