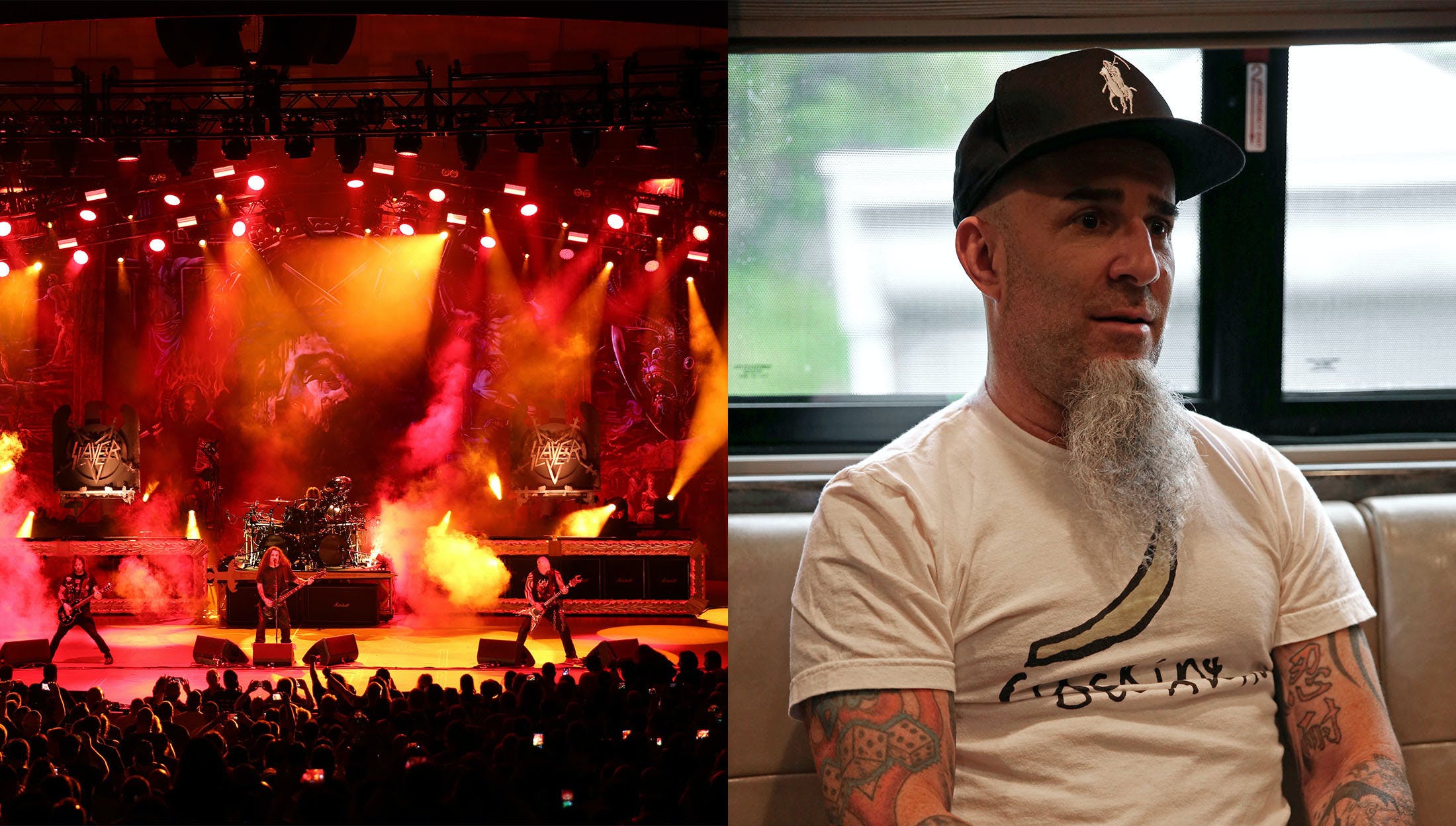 The first leg of Slayer’s North American tour is now in the history books. While we wait for the second leg of the tour to kick off on July 26 (followed by a slew of exciting shows in the UK and Europe starting in November), we thought we’d ask members of the four supporting acts on that first round of shows to recount the first time they ever saw Slayer perform (yesterday we spoke to Lamb Of God's Randy Blythe!).

The first time I saw Slayer was at L’Amour in Brooklyn back in 1984. I know it was ’84 because they came back on tour in ‘85 with Venom and Exodus to shoot a video. I can’t remember if I had met the dudes before seeing them play, or if it was after, because I also have pretty distinct memories of having drinks with Kerry and Jeff at a Mercyful Fate show at L’Amour…. I’m kinda thinking that I met them before I saw them play.

L’Amour shows were always so packed and dark; half the time you couldn’t even see the band. I was in the pit with my brother, Jason, who got his nose broken that night. But he actually left the pit, wiped the blood off, and jumped right back in. Gotta give it up for my brother! And yeah, I just remember it being crazy, ‘cause I believe it was Slayer’s first time in New York. It was for their first album, Show No Mercy – I don’t even think Haunting the Chapel was out yet.

As for discovering Slayer, I was always on the lookout for new music from like, 1980 on.

I was constantly at different record stores: either Bleecker Bob’s in Manhattan, or Rock ‘n’ Roll Heaven, which was Jonny Z’s store in Old Bridge, New Jersey. Generally, there would be a New Releases section and a New Metal section -- and that’s probably how I came across Slayer. Because it’s not like we had magazines or any real media….

We did have tape trading – so maybe I had heard about Slayer from friends in Europe, first. There was so much trading going on between people in the States and people in England, and Denmark, and Germany, but I remember buying Show No Mercy. Like, [seeing the album] in the store and going, ‘Oh yeah, these guys are supposed to be good.’

I loved that album, ‘cause I was already a Venom fan. And it was kind of along those lines, but tighter sounding. Maybe just…a more grown up version of Venom? But without sacrificing any of the balls or insanity, ‘cause you know, it’s fucking Slayer. I remember thinking it was like if you mixed Judas Priest and Venom.

And then, of course, when I first met them, and we started hanging out and touring together, you find out Kerry’s a massive Judas Priest fan and Jeff was a crazy hardcore and punk fan -- it all makes sense. And then you see that Tom Araya is in the Suicidal Tendencies video for Institutionalized. There’s that crossover thing. So it was all right up my alley. Slayer was instantly in my top five bands from the time Show No Mercy came out.

Slayer and Anthrax both started in ’81, but both bands were distinctly different from day one. It was pretty clear when we did those Big Four shows. All four bands [including Megadeth and Metallica] came from the same influences, same time…yet all four bands took different paths. We all sound so completely different from each other, yet live under the same branch of the metal tree.

Out of all the Big Four bands, Anthrax and Slayer certainly have done the most together since 1991, when we did Clash Of The Titans. We get along great. We’re friends! We were really excited when we got the call for this [farewell tour], ‘cause we had no intention of even being on tour this year. We were supposed to just do the Killthrax run [with Killswitch Engage] earlier in the year, and then the rest of the year was gonna be writing and maybe getting into the studio. And then our agent said ‘Do you wanna do this Slayer tour? It’d be Slayer, Lamb Of God, Anthrax, Behemoth, Testament.’ And I immediately said yes when I got the email. I wrote back, ‘Yes! That’s fucking awesome.’

We didn’t know it was gonna be a farewell, though. We found out just like everyone else when it came out on the internet, and I called our manager and I was like, ‘Did you know about this?!’ He’s like, ‘No, nobody did!’ Even the guys in their crew. But then it made it even more special that they asked us to do this first leg -- and then we knew there was gonna be a leg two, and Europe as well, at the end of the year.

People keep asking me. ‘Is it bittersweet?’ No! We’re not even a month into the first leg of this thing. Once they’re done and there’s a hole where Slayer used to be, and they haven’t played a show in three years, that’s when I’ll process it and go, ‘Wow, it’s fuckin’ weird that Slayer’s not out there touring anymore.’

Someone actually said to me ‘Is there a melancholic feeling on this tour?’ I said, ‘There’s no fuckin’ melancholy in metal!' Slayer, Lamb Of God, Anthrax, Behemoth, Testament – yeah, we’re all sittin’ around crying in our soup. What are you, fuckin’ nuts? No! We’re having a blast! The shows are fuckin’ awesome! We’re out here playing giant places and they’re packed, and people are loving it. Everyone is having a blast. Maybe if anything, it will change [Slayer’s] minds -- they’ll be like, why would we not wanna do this more? That’s what would be the best -- is if after one of these legs they’re just like, ‘You know what? We changed our mind. It’s just too good! Why would we leave?’

But look, I’m not in their band. Band politics and dynamics are as difficult as family dynamics. And you spend more time with your band members than you do your family generally, for longer periods of time. If you know anything about family dynamics you know how difficult that can be. And 37 years in a band, that’s like 180 years in normal shoes.

So I can understand it. And look, they’ve been through other things. When [guitarist] Jeff [Hanneman] was out of the band, and then of course, we lost him, that’s a big fuckin’ deal. [Anthrax] never had anything like that. You know? Metallica had that -- but early on, with Cliff. If they had to deal with something like that now, I can see why it’d maybe take some wind out of your sails.

But we bust their balls. We’re like, ‘What if Metallica calls and says, “Let’s do a Big Four run AFTER you’ve officially retired.” Then what?!’ And you just get smiles.