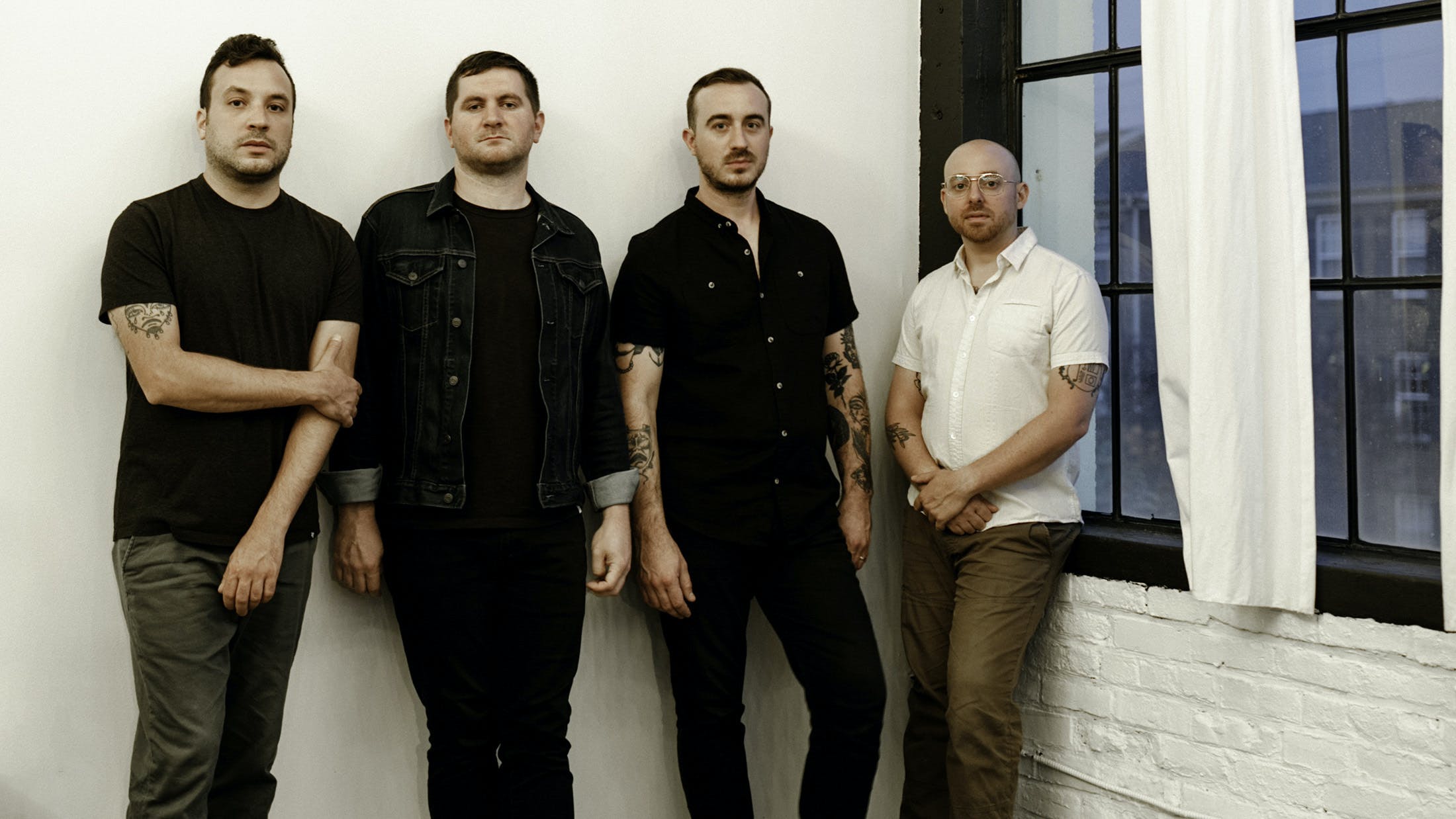 Greg Barnett, The Menzingers’ co-vocalist and guitarist, is committed to the habit of writing songs. On precious rare days off from life in a band that has been in the game since forming in Scranton, Pennsylvania in 2006, the 31-year-old fills part of his time enjoying home comforts with his girlfriend. He catches up on what’s going on in the world through the pages of The New Yorker magazine. He oohs and aahs in the direction of his niece. Improbably, he even plays a round or two of golf. But at least part of each day he makes sure to spend alone, with only an acoustic guitar for company, as he attempts to conjure songs out of city air.

“It’s what I’ve always known,” he says of his dedication to his craft. “I fell in love with songwriting at a young age. I got [Billy Bragg’s 1986 album] Talking With The Taxman About Poetry when I was 15, and I devoured it. I devoured records by Bob Dylan, The Clash, the Sex Pistols, the Ramones; I loved that style. I love political music, I love protest music, and I adore love songs. I love the human expression that comes with songwriting.”

He has become rather good at it, too. The Menzingers’ 4K-rated sixth album, Hello Exile – on which writing credits are shared with fellow members Tom May (guitars and vocals), Eric Keen (bass) and Joe Godino (drums) – glows resplendent with first person vignettes, across a 12-song set ablaze with vivid images of the American landscape. Lost evenings abound. As do reflections on the passing of youth, and portraits of lives in which even the personal becomes quietly political.

READ THIS: Why The Menzingers are getting dark on new album Hello Exile

But this is an age, and America is a country, where even those with introverted instincts feel the need to become loudly political. This The Menzingers do on Hello Exile’s opening track, the fabulously titled America (You’re Freaking Me Out). It’s a biting song that takes place at the ‘end of history’, where people are ‘swinging and swaying to the murder mystery’ from which ‘rhyme and reason fled the crime scene’ that has occurred in a nation where some at least are unable to ‘recognise truth from clever lies’. In its original form, the song ran to a sprawling “10,
15, 20 verses” as Greg wrestled to get the enormous weight of disillusion at events in his homeland off his chest. With help from the band, he eventually tightened it up and honed it down. To hear him speak of the process now, it sounds as if it cost him something.

And for anyone who thinks that references to a storm-battered mental health and personal upset are pitching things a bit high, here’s why Greg feels this way.

“It seems to me that a lot of Americans are kind of okay with authoritarianism,” he says. “The reason they voted Donald Trump in as president is because those people don’t want democratic norms. They don’t want laws in place. They want someone to come through and say, ‘This is how it’s gonna be and this is how we’re gonna do it.’ That’s really scary in a democratic republic – that people are willing to live this way.”

In case you hadn’t noticed, The Menzingers aren’t those kinds of people. When Greg asks: ‘How do I steer my early 30s, before I shipwreck before I’m 40?’ on that opening track, it underlines his desire to do something about the malaise, albeit by being the change he wants to see. One of Hello Exile’s best qualities in fact, is the way it handles the transition between the anger of youth and the responsibilities of adulthood – in particular the desire not just to identify faults in the world, but also to act as part of a solution to the problems. It’s a rallying cry for those who feel that same deep sense of alienation within them – to recognise that it’s not just enough to accept things and stoically crack on, but to act, and to do something about it.

“My friends all think the same way as I do,” says Greg. “I know there are a lot of communities out there who are trying to do whatever they can to help improve things. There are a lot of benefit shows in Philadelphia, for example, and there’s a lot of fundraising going on; it seems that everybody is coming together to try to do whatever they can to make changes. Whether they are writing lyrics that are political – in rock music or folk, or whatever – my friends at least are pretty active in that kind of thing.

“For our part, our music is political, but it’s also personal,” he says. “And people have identified with what we have been saying as a band. That’s a really powerful thing. We’re really lucky to have that and we’re very honoured by it.”

Greg is justifiably proud of the connection that exists between his band and their audience. As he says, “It’s pretty hard to see someone in the front row moved to tears by a song you’re playing and not to be moved by that yourself.” Because this is a band for whom the divisions that separate a group from their audience are things to be overcome, not to be reinforced. In other words, your life – our lives – are reflected in the songs on Hello Exile.

“We’ve been doing this since our teenage years and our fans have grown up with us,” he says. “It always seems as if the stages of life that we’re going through in the band, our fans are going through them at the same time. It feels like there’s this real connection between our audience and us. Because we, as people, we’re not really that special when you break it down. We’re just four regular guys from a small town in Pennsylvania. But I think our normalcy is what’s so relatable, and it’s caught on in a way that’s incredibly passionate and intense.”

READ THIS: DIY punk is nothing without community says The Menzingers' Greg Barnett

Perhaps it’s that recognition of the self in these ‘normal’ figures that inspires others to rise up and do their bit, too. The challenges of traversing that transition from youth to adulthood remains front and centre, however, even if the wider world’s looming sense of dread has crept into the picture frame of late. Old issues remain. Lessons have been learned. Changes are in place.

“I’ve learned that it’s not okay to put my life on hold and disappear on tour for two years as a way of running away from my problems,” Greg says, reflecting on how things are different now from the way they used to be – a theme threaded throughout each of these songs. “I’m much better these days at being an adult.”

He’s also much better at taking the time to appreciate the success that has come The Menzingers’ way, rather than allowing it to fly by in a blur of exhilaration – a tendency explored in London Drugs, a standout cut on an album filled with highlights. He recalls a night in London in April 2017, at Camden’s Koko, where the band had just performed a sold-out show. In the green room after the set, a party was in full swing, and Greg was keen to dive into the swim with his bandmates and touring crew. But for the first time, he took a breath, held back for a short while, and tried to appreciate the moment a little. It was a chance to reflect on the evidence of a job well done, by a band who had made a genuine connection with 1,500 people in a city five time zones away from the place where the songs they’d just performed were first written.

“After that show I thought about how fast life goes by and that I need to slow down and really think about the great things that are happening to us, and not just party,” he says. “So I gave myself a minute in which to be alone, and to savour the achievement of what had just happened. That was really special to me.”

That spring night, Greg Barnett may well have cast his mind to the journey that he has taken, a campaign that has stretched all the way from playing Green Day’s Basket Case and Bad Religion’s You Are (The Government) at his first practice, to this. It has been a journey throughout which Greg has understood that punk rock is a precious cargo, and he has remembered, every step of the way, to take care of the contribution he makes to its proud history. After all, he and his fellow Menzingers are mere custodians.

READ THIS: "It felt like anything could happen" The Menzingers and PUP discuss their wild years

“I hope that some day I can possibly do the same, in some small way, as the bands who came before me did for me,” says Greg. “If someone can pick up a guitar at their first band practice and play one of our songs, well, I don’t think there’s a more flattering thing that can happen to you as a musician.”

Somewhere out there right now, there might be a young would-be punk kid, burdened with the weight of the world on their shoulders, doing just that. To borrow a phrase from another set of punks who knew a thing or two about capturing the mood of disaffected youth, everything sucks today, but tomorrow it doesn’t have to.