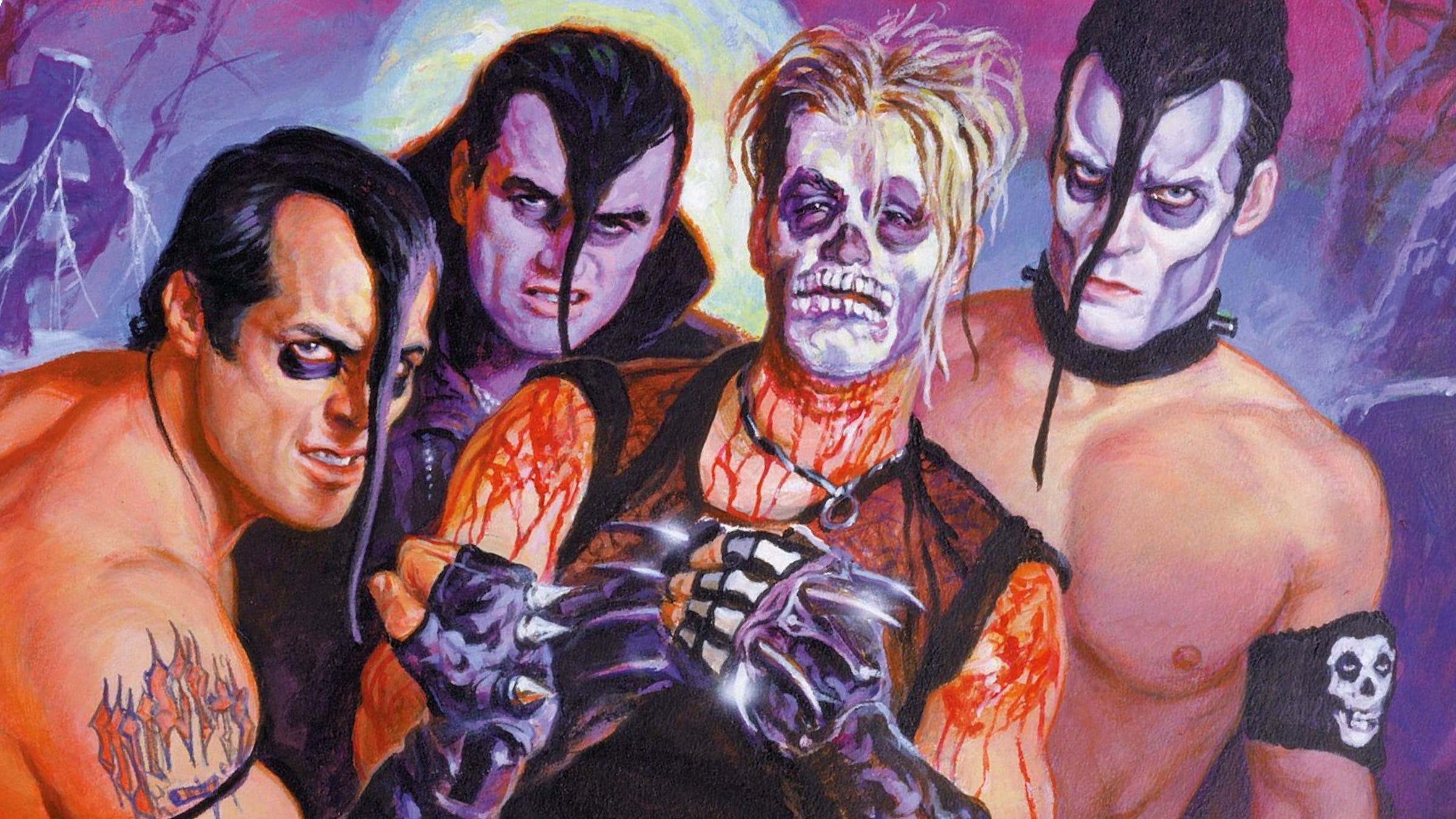 The problem most people had with the Misfits reforming with a new singer in the late ’90s is that it felt a little toothless. Jerry Only winning the rights to the band’s name and identity in court didn’t come off as terribly punk rock, and the hard turn into niche convention-style horror fandom felt even less so. Without Glenn Danzig’s bark and misanthropic attitude, the Misfits were more polished and film-centric than ever, with Basil Gogos cover art celebrating songs about whatever movie was featured in Famous Monsters Of Filmland that month. That seemed like a far cry from the death punks whose fascination with old gore flicks went hand in hand with a fascination with the very real terror of the violent world.

But the truth is that if one removes the weight of the Misfits’ legacy from the equation, the albums the band made with vocalist Michale Graves and drummer Dr. Chud are two of the most enjoyable pieces of horror punk out there. 1997’s American Psycho is pure drunken singalong fun, while 1999’s Famous Monsters is an ultra-polished piece of pop metal with several unforgettable songs on it. And no matter how happy we are to see Danzig, Doyle, and Jerry together again, these records are gems that shouldn’t be forgotten any time soon.

It bears remembering that before the Michale Graves albums, the Misfits weren’t nearly the rock institution they’ve since become. What always made the band special was their vague sense of underground mystery -- a punk rock band loved by metal dudes, fronted by Evil Elvis before his solo career, with its strongest fanbase in New Jersey of all places. By the time the majority of rock fans woke up to them, the Misfits were mostly a band loved by skater punk kids and splatter movie-obsessed metalheads. Graves himself was unfamiliar with the band when he decided to try out, and apparently bought and listened to Collection I and II on his Walkman to learn about their music.

What Graves lacked in grit, he made up for in his vocal range and songwriting abilities. Michale’s quick, sharp barks sounded snotty and nasal, but his soaring choruses and "Whoa"s were epic and infectious. But it was the way he broke down song structure, and the mid-paced croon-heavy singles he was behind, that really changed the game for the band. On tracks like Saturday Night, From Hell They Came, and the epic Dig Up Her Bones, Michale’s vocals channeled both the upbeat spookshow horror of ‘90s ska-punk and the entrenched, emotional darkness of the goth-punk scene. It was something that, in his stone-faced seriousness, Danzig could never do.

Amercan Psycho is a chuggy, celebratory horror punk album with a ton of earnest soul and lofty ambition. Doyle made a smart move of updating his playing and guitar tone, adding thick helpings of groove metal soul and pop-punk creaminess to his riffs. The band also revels in the sense of sonic excess that had become the Misfits’ signature, with Graves adding bellows, moans, and song-ending syllables every chance he could get. The result is a record that not only made the Misfits an active band once more, but also gave young punks an easy gateway into the legendary hardcore act’s music through a new, modernized sound.

Famous Monsters, meanwhile, only further refined the Misfits' tone and image. Influenced by the sudden popularity or psychobilly and spook-surf, the band embraced their classic horror bent to an extra degree. Their punk rock edges were filed down even further, while the metal influences were taken up a notch in the form of riffy, arch overtones. The film references also got nerdier, but they were easily offset by Graves’ delivery and harmonizing, which made the band more of a rockabilly throwback to the atomic 1950s than an old-school punk crew trying to regain their former glory. The album contains hit after glossy hit, with wailers like Dust To Dust, Scream, Living Hell, and the forlorn heartstring-grabber Descending Angel showing just what the Misfits could be in their new and seemingly final form.

Given their boom in popularity and knack for writing deliciously-catchy music, the new Misfits might have continued on to incredible levels of renown and stardom. Unfortunately, the need to overproduce and overmarket that feels at times inherent in both the punk and horror scenes hit the Misfits hard. Suddenly, you could buy any piece of merch imaginable with the Crimson Ghost on it, and the band were covering the Halloween hit The Monster Mash. Meanwhile, behind-the-scenes issues with Only, Doyle, Chud, and Graves led to even more line-up changes, until the Misfits consisted of Jerry Only and a series of rotating guest musicians. Whatever cred the band had regained vanished, and left those fans hopeful for the future bummed out and praying that Danzig would someday come back.

Obviously, Danzig did just that, and now for a considerable price you can see the original Misfits playing arenas. And that’s great -- had the band never reunited, it would’ve left one hell of a What If in its wake. But it’s worth remembering that though the Danzig years will forever be what the Misfits are known for, the band's two albums with Michale Graves deserve a place alongside that material, and are impressive in their own right. If Glenn was smart, he’d bust out Dig Up Her Bones one of these nights.