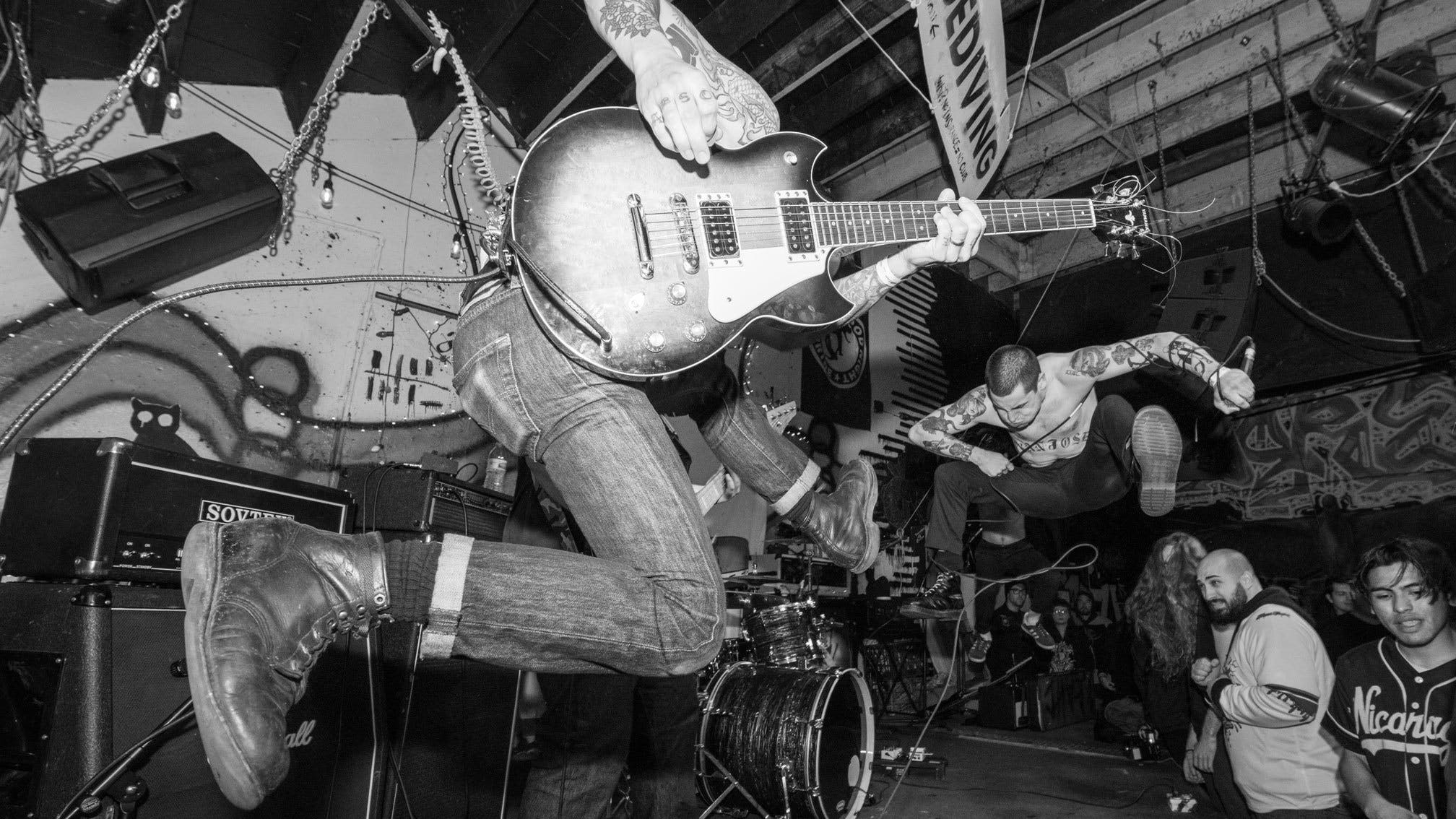 If there’s one call we generally don’t get to make ourselves, it’s how things end. It’s only human, then, to fixate on when the curtain might fall, to table all those loose ends and might-have-beens. But it’s something most bands don’t consider until their time is almost up – there are more ruptures and slow marches into obsolescence than there are neat and tidy farewells.

In a few months Gulch will stop existing. The idea is that the short-lived Bay Area hardcore greats will go out on their own terms, at the peak of their powers, and with their legacy intact. It’s a hard-headed call, certainly a gutting one for fans who will never see them play live, but it’s not without a sense of grim romance. This band you love, this shirtless, black jeans-clad, gut-churning band, will never suck – it’s a case of play fast, die young, leave a gnarly-looking corpse behind.

“Gulch was straight-up raw, untamed aggression,” says LURK’s Kevin Kiley, fresh from playing their last Chicago show with them a few weeks ago. “They were able to bring a lot of attention to the hardcore and punk community as a whole, and the way they carried themselves in such a humble DIY spirit even after gaining so much hype is admirable. I think going out on top with a handful of special shows is the perfect way for them to end it.”

So, why don’t more bands do it? Probably because it’s not easy to say goodbye to something you love, especially if that something has even the remotest shot at making you some money. But in hardcore, where making cash is often a pipe dream or beside the point, it’s long been a badge of honour to get out while you’re still hot: see everyone from Minor Threat, and a deep tranche of the Dischord set, to most of New York’s foundational bands. Appropriately, Gulch are taking their leave right on the cusp of things going one way or the other. Their next record would arrive with a hellacious, perhaps stifling, amount of expectation attached to it, and that’s a fact that they’ve seemed cognisant of for a while.

Formed in 2016, their rise was a picture book DIY success story. Their early work – the Demolition Of Human Construct tape and Burning Desire To Draw Last Breath 7” – set the wheels in motion, foregrounding a blend of grimy, unrelenting hardcore with unhinged nods to death metal. Live, they became known for the punishing intensity of their ad hoc shows, which flew by in a whirlwind of limbs conducted by the brutish physicality of vocalist Elliot Morrow.

“I’ll never forget stumbling in on the first Gulch set I ever witnessed,” says Ross Hansen, whose band, Ingrown, will open for Gulch at X Bar in Cupertino, California on January 30. “We got to play with them in early 2018 in San Francisco on our way to Sound & Fury. I didn’t know what the hell I was gonna see but I was scared instantly – it was some slamming skinhead hardcore delivered about as hard as getting a bunch of bricks thrown at you. They put on such a damn show and everyone did their parts with maximum force. I don’t remember being entertained that same way since. I was immediately hooked and inspired.”

As the hype grew, Gulch’s own view of their ascent seemed to come into focus, with chances to shout out the community in San Jose and Santa Cruz taken with relish. No matter how many roads seemed to open up for them, the focus was always pulled back to the scene. “[I’ve got] nothing but respect for Gulch and the way they're ending things on their own terms,” says Spy vocalist Peter Pawlak. “They've been huge for getting the Bay back on the map these last few years, and they will be missed.”

As long ago as 2020 guitarist Cole Kakimoto was telling Bandcamp how they’d already begun thinking about the Gulch endgame. For added context, that interview was happening because they were putting out their debut album, Impenetrable Cerebral Fortress, amid a particularly febrile sort of buzz that managed to persist through the lean, show-free early pandemic days.

It largely centred around merch, printed by Cole in his San Jose shop, that wouldn’t stay in stock for more than a couple of minutes, sparking huge lines at the table, jacked up resale prices, and plenty of social media sneering, with suggestions that they were artificially creating a shortage to amplify demand. They weren’t, and they always seemed a little weirded out by the whole circus.

“We had a plan before this LP came out, and we may stick to it and we may not, but the plan was: come out with the LP, use that as a jump pad to go to the next level, then self-release an EP like a year later and then break up immediately,” Cole told David Anthony. “It’s hard to say whether or not we’re going to stick to that, but Gulch can’t be forever.”

That hypothetical scenario would have pleased anyone out there who has come to prize undiluted discographies over time served: people who’d take Have Heart over Refused, maybe, or those who declined to learn the names of any Ramones after Tommy. Cole was right: nothing good can, or should, be forever.

But it’s one thing to say it, another entirely to do it. When a poster announcing their final shows emerged – details scratched out, with dates and venues to be revealed over time – it hit like a hammer blow for those who thought (not unreasonably) that they were only trading in a bit of hardcore posturing and would soon sign with Epitaph or Roadrunner or something, maybe strap on some GoPros and go the full Code Orange.

We were, after all, only months removed from their split with Sunami, where they blew through two songs that displayed the sort of ferocity and concrete heaviness only a few of their peers can muster. Recorded live with producer Jack Shirley, as Impenetrable Cerebral Fortress was, it showed a band with a vibrant, complementary method in place that really worked for them. There was clearly more where that came from, right?

Yes, undoubtedly so. But, just like the rest of us, they’ve also got it in them to curdle the whole thing by turning in work that falls short of their existing benchmark by only a couple of inches. With knives already sharpening around them, that sort of high stakes game perhaps isn’t particularly attractive, especially when you’re as protective of your band, and scene, as Gulch are. You get the feeling that diluting things even a little bit would be seen as a betrayal by the band members themselves.

They’re not out here trying to become the next foundational pillar in Bay Area punk history, nor are they willing to work to someone else’s demands. They’ve always done things one record at a time, no long-term deals, and with their own tastes, standards and goals front and centre. Even if it’s a bad vibe for those of us who enjoy their brand of chaos, all this makes sense.

No door truly stays closed forever, but it’s hard to see Gulch suiting up again for some contrived reason. It wouldn’t be a surprise if they played some backyard show full of San Jose diehards in a few years or something, but beyond that? It would be out of character. There’s something pure about wanting to be remembered as a great band from your hometown – that’s all most punk musicians want back at the beginning, and it’s an ending worth celebrating.

Exclusive: One of Gulch’s final recordings to be released in conjunction with comic series

Gulch’s cover of the Pixies’ Monkey Gone To Heaven – one of their final-ever recordings – will soon see the light of day via the post-apocalyptic What’s The Furthest Place From Here? series.