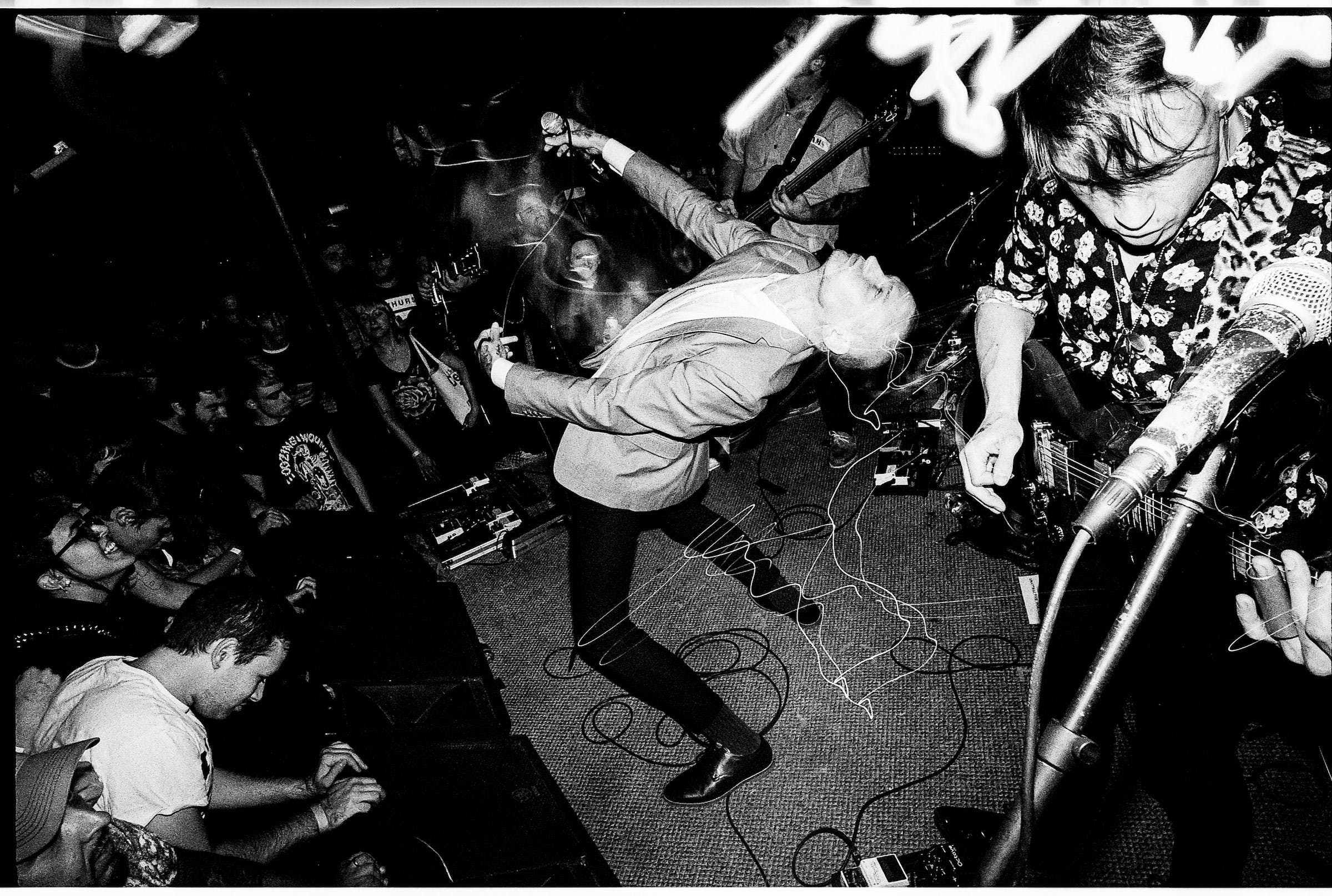 Chaos is a double-edged sword. Spend too long treading that edge and it will slice your legs off. In their initial lifespan between 2002 and 2009, Daughters lived on that precipice between glorious artistic freedom and utter, disastrous oblivion.

Born in Providence, Rhode Island’s hardcore underbelly, the quartet generated nihilistic psychodramas over three albums that mutated their frenzied roots with esoteric noise. Nic Sadler’s anti-guitar playing often sounded like rats scurrying through walls as bassist Sam Walker and drummer Jon Syverson’s wrecking-ball attack tore through the building. And if the music was challenging, their live shows were confrontational exhibitions in self-destructive mayhem, where frontman Alexis Marshall would leave the stage bloodied, half-naked and covered in his own vomit.

“How I wasn’t killed by a fucking sound guy over these years on multiple occasions is beyond me,” says Alexis today with a dry chuckle, sitting in a house in Providence. He stirs his coffee, which these days is the strongest stimulant he allows himself. “I was so out of it on alcohol, and sometimes drugs, that I wasn’t even hip to how many times Jon had to smooth things over because I had put the sound guy’s microphone up my ass and they wanted to beat the shit out of me.”

Reflecting on those days, both Alexis and Nic speak with a fondness that belies the damage they did to themselves. Although Daughters’ compelling noise-rock seemed obstinately designed to never rake in a sustainable income for its four members, and shows across the globe were often played to a smattering of confused or outright hostile punters, Nic maintains that, in the eye of the hurricane at least, life was fun.

“Maybe it was wilful ignorance that made it possible, for me at least,” he shrugs. “I would come home with less money than I started, no job and staying on an ex-girlfriend’s couch. That was how I lived. But even the idea of a chaotic Daughters show – Lex drinking someone’s piss and spitting it back at them – I don’t know if it’s the subculture we come from, but it never really felt that way. We were just doing our thing.”

Inevitably, something had to give. Several things did. “The chaotic nature of the shows didn’t always stop at the shows,” says Nic diplomatically, recalling how years doggedly touring 2006’s Hell Songs left them bruised, penniless and embittered by a lack of recognition. Sessions for the band’s self-titled third album heightened tensions within the ranks as Nic exerted more creative control, writing the lion’s share of music in an attempt to keep the wheels on a battered vehicle. “People were tired, poor, pessimistic and cynical,” he summarises. “We have a variety of mood disorders in this band, so that stuff alone, over many years, would be enough to end a lot of bands. We put up with a lot from each other, just from the situation of being Daughters.”

The final straw came in 2009. Alexis got sober and was reluctant to head out on the road, littered with people and situations that would enable his self-destructive streak. “It was easy to walk away,” he says simply. “Nic and I had a typical argument about who we were going to tour with and I said, ‘I don’t care enough to fight like this anymore. I’m done. I don’t want to see any of you.’”

Internal squabbles continued briefly before fizzling out, along with the band itself, leaving Nic to piece together their eponymous third album, which was eventually released in March 2010, long after its members had scattered. In a typically Daughters-ian twist of fortunes, the album was praised by critics for snapping their aggressive energy and artistic experimentations into sharp focus. No official announcement of the split was even made – just silence.

“There’s something perpetually inconvenient about Daughters, like a low-grade curse that isn’t quite enough to kill you,” says Nic from his home across town, admitting that a perverse sense of humour has been key to surviving Daughters, and their unlikely revival. The story goes that sometime in 2013 Robotic Empire label head and longtime Daughters benefactor Andy Low tricked Nic and Alexis into having dinner together on the pretence that the other party wanted to bury the hatchet. They hadn’t spoken in years, but on realising the ruse the pair fell into easy laughter. “Maybe it’s our egos or narcissism,” grins Nic, “but we sat down, ordered food and it had to be three minutes before we were talking about making a new Daughters record.”

Meanwhile, the group found that their volatile stock had grown in their absence. Wide-eyed accounts and shaky video footage of their unhinged live fury had taken on mythic status, so much so that when the members reunited for a show at The Met in Pawtucket, Rhode Island later that year, people travelled from far and wide. An extra date was added and the momentum has been the same since, with several shows from their recent European jaunt selling out well in advance.

Yet life for Daughters’ constituents has changed dramatically since the hiatus, too, and so have their priorities. Alexis is now a stay-at-home father of two living in Pennsylvania, while Jon tour manages bands. That meant writing 2018’s staggering comeback record You Won’t Get What You Want was only made possible via Dropbox and email. Back in Rhode Island, Sam turned his hand to brewing beer, and it is his responsibilities to his malts and family that prevented him from touring last year. Chris Slorach of Canadian noise lovers METZ filled in, while Fucked And Bound’s Lisa Mungo was drafted in to trigger some of the weirder, ambient textures on You Won’t Get…. “The commitment to being in a band trying to make art is always going to be there,” Nic stresses, yet where a do-or-die mentality once dominated, compromise has become part of Daughters’ lexicon.

“Everything hurts from years of abusing myself while playing,” says Alexis without self-pity, and perhaps even a hint of stoic pride. Now sober for a decade, the bristles of his cropped haircut are punctuated by pockmarks and scar tissue. “I can’t move one of my arms too well and my left knee slips whenever I pivot, but if you really care about art then you’ve got to accept that it’s gonna destroy you in the end.”

Since getting back on the road last year, Daughters have re-established themselves as a singularly fearsome force, with Alexis’ performance still possessing a life-threatening intensity. The need to connect with people in the most visceral way possible hasn’t changed: “I don’t want indifference, I want to feel that intimacy. So I might stick someone’s hand in my mouth, or I’m going to have someone spit in my face. I want to connect with people, and there’s a limited amount of time during a show and just on this Earth [to do that].”

And how does that extend to relationships within Daughters? Is it all peaches?

“Well, one interesting facet of Daughters is Lex and I are pretty much not collaborative at all,” Nic chuckles. “So although that is the bane of my existence, it is totally fascinating because I’ll spend years working on music and I have absolutely no idea what he’s going to do. We are going to make another record and I’m curious to see what we can and can’t do with moods and tones that sound like us.”

“I’m glad we haven’t lost the yin and yang that I think benefits us creatively,” nods Alexis in a rare moment of harmony. Perhaps that is the order behind the chaos of Daughters, the tension that binds them as one. How long it will last is anyone’s guess, but for now it seems that the universe is working in their favour.

“It was a long intermission and now it’s like the second half of West Side Story has started,” grins Alexis, “so let’s see where this takes us. Someone’s gonna die… who’s it gonna be?”

Album review: Alexis Marshall – House Of Lull. House Of When

Art rock powerhouse Daughters will hit the road this winter with HEALTH and Show Me The Body along for the ride.

PLUS! blink-182, I Prevail, Sum 41, Black Sabbath, Bring Me The Horizon, Architects, As It Is, Motionless In White and LOADS more!

Noise rock savants Daughters turned a tiny Brooklyn dive bar into a temple to all the scariest gods in the latest K! Pit…