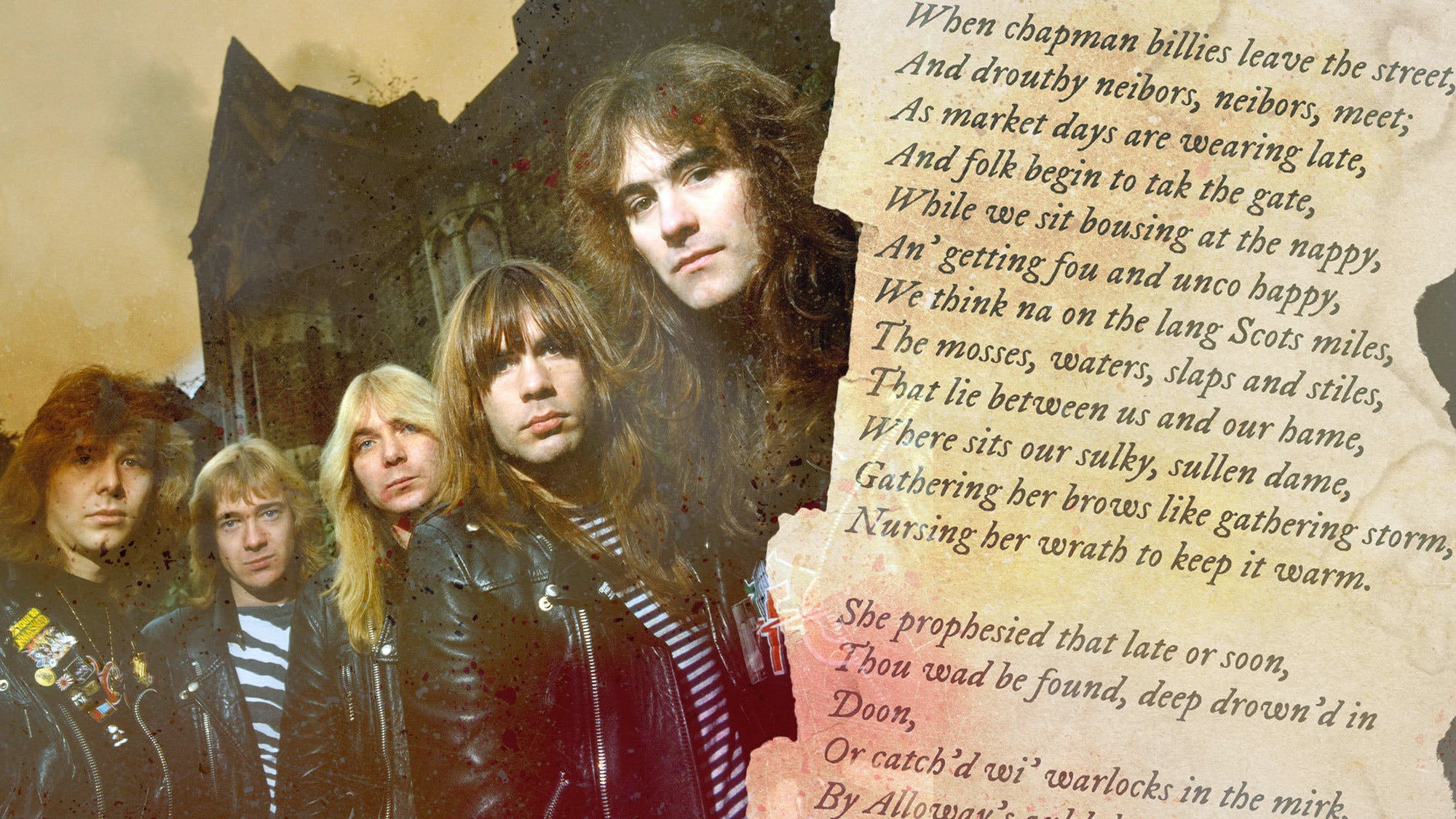 "Here's what not to do when a bird shits on you."

Samuel Taylor Coleridge almost certainly never imagined such an introduction to his epic poem The Rime Of The Ancient Mariner, yet this is how Bruce Dickinson announced his song of the same name to a Long Beach audience some 187 years later.

It's no secret that literary influences run through Iron Maiden's back catalogue like a golden thread, with songs inspired by Frank Herbert's Dune, Alistair Maclean's Where Eagle's Dare and Huxley's Brave New World. Poetry too, has inspired several of Maiden's most iconic songs.

Written in 1798, The Rime Of The Ancient Mariner is an epic, both in terms of length and its impact on British poetry. At 635 words, the poem is full of curses, bad luck, seas of corpses and slimy things crawling on legs "upon a slimy sea". Perfect imagery for a metal song, if you ask us.

Coming in at 13 minutes, Iron Maiden's version is almost as long. Steve Harris penned the song, changing the perspective of the original poem from first to third person, but keeping the horror and vision of Coleridge's epic. Two quotes from the original tie the final song together: Bruce sings the first as the Mariner's ship is becalmed, the second in the unsettling middle-section where death takes the crew – leaving only the Mariner alive. It's also worth noting that Maiden's epic version preserves much of the structure from Coleridge's poem, showing this was an informed interpretation rather than just mining a classic piece of British literature for a thematic device.

The band are very aware that their music acts as a gateway for fans to discover poetry. In an interview with Kerrang!, Steve Harris said, “It’s okay to write simple pop songs. There’s nothing wrong with that. But if kids went out and checked into Coleridge just because we wrote a song about it, then that’s really something.”

Although nowhere near as long in terms of Maiden's back catalogue, The Trooper is also an epic. Now the name of the band's world-famous beer, the song takes inspiration from the Crimean War battle, specifically the Lord Tennyson poem The Charge Of The Light Brigade, which immortalised the 1854 military action against the Russian army at Balaclava.

In the official music video, shots of the band performing are intercut with scenes from the 1936 film The Charge Of The Light Brigade, placing Tennyson's words front and centre.

In contrast to The Rime Of The Ancient Mariner, which takes a step back from the original poem's perspective, The Trooper flips Tennyson's poem and puts us right in the action alongside the soldier's fighting on the ground. Steve Harris has previously spoken about how the song’s opening was played to recreate the rhythm of cavalry charging into battle, something Tennyson was also aiming for with the rhythm of his 1854 poem.

Not all of Iron Maiden’s poetic inspiration comes from the 19th century. For Maiden’s hugely underrated Flight Of Icarus, we need to go back much further in time.

To most people the story of Daedalus and Icarus is just part of Greek mythology, timeless and eternal. The tragic tale has come down to us via the epic poem Metamorphoses by Ovid, the Roman poet who lived 43BC-17AD. At nearly 12,000 lines, 15 books and 250 myths, the whole of Metamorphoses might have stretched even Iron Maiden's legendary songwriting ability. The song does use artistic licence, varying from the original poem in several ways, such as the epic flight being watched by a waiting crowd. In Maiden's hands the poem becomes a tale of teenage rebellion rather than a father's loss.

To the elation of Maiden fans everywhere, Flight Of Icarus made a welcome return to Maiden’s set in their 2018 Legacy Of The Beast tour.

"Let him who hath understanding reckon the number of the beast, for it is a human number. Its number is six hundred and sixty six."

Number Of The Beast wears its biblical and cinematic influences (Omen II) on its sleeve, but the primary inspiration is poetic and may not be very obvious at first. In a recent interview with Rolling Stone, Steve Harris discussed writing the Maiden classic, revealing that it was inspired by Robert Burns’ poem Tam O’ Shanter.

Tam O' Shanter is an epic poem about drinkers in 19th century Ayr, and it's in the 12th verse where we can see the influence on Number Of The Beast. With descriptions of dancing witches, grim shaggy dogs (reminiscent of Black Shuck and Barghest of legend), Old Nick (in the shape of a beast), murderer's bones and unchristened babies – Scotland's most famous poet spares no details.

We obviously can't talk about Maiden without mentioning Derek Riggs’ iconic artwork – in this case the album cover for Seventh Son Of A Seventh Son. On the 1989 arena documentary Heavy Metal Heaven, Bruce Dickinson talks about showing Derek a copy of Dante's Inferno (the first part of the 14th century writer's poem The Divine Comedy), illustrated by Gustave Doré which showed figures in hell trapped in ice. There is some dispute over the influence on Riggs's chilling (sorry) artwork. In Run For Cover: The Art Of Derek Riggs, the artist says that his inspiration actually came from a documentary about the North Pole. While this might never be fully clarified, it does show that Dante's poetic exploration of hell was something Dickinson had on hand.

With fencing, flying commercial jets, and football, Iron Maiden have never conformed to the stereotypical image of a metal band, so it’s not hard to picture Bruce settling down with a book of Dante’s famous work (and a pint of Trooper, naturally).

Let’s face it, traditional poetry and heavy metal appear worlds apart. With references drawn from John Keats (Prodigal Son), Andrew Marvell (Bring Your Daughter… To The Slaughter), and John Milton (Lord Of Light) hidden in their back catalogue, Iron Maiden have brought those worlds just a little bit closer. Long appreciated as one of the most theatrical bands in metal, it seems fitting that Maiden are also the most poetic.