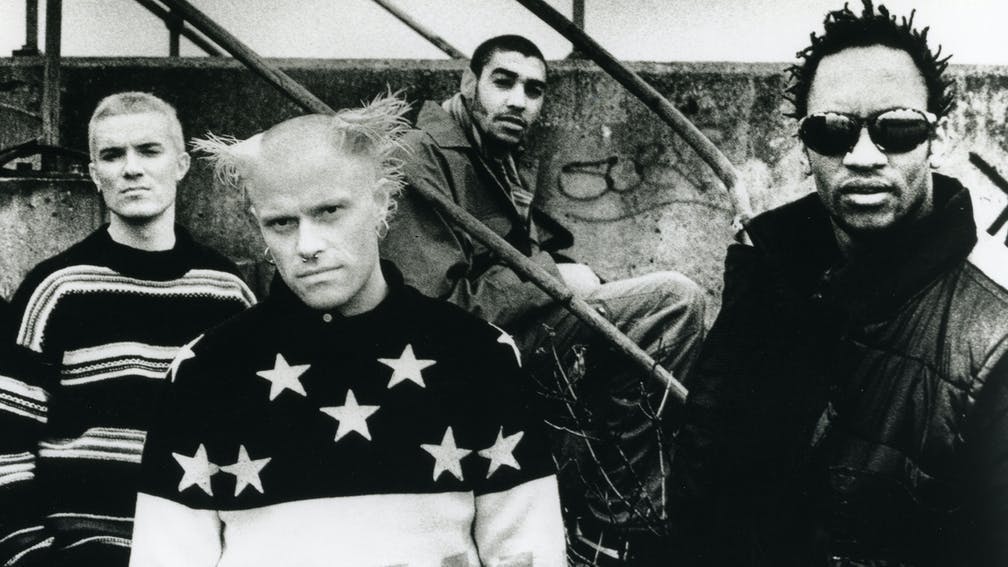 ‘Do Not Adjust Your Set’ ran the headline of the very first Prodigy feature that appeared in Kerrang! back in December 1995. “No, we ain’t taking the piss. Techno terrorists The Prodigy are for real. Punk thug Mörat reckons they’re one of the heaviest bands ever,” continued the rather over-cooked sub-head.

Oh, yeah. And I can describe that sub-head as over-cooked because, as the Editor of the magazine at the time, I actually wrote it.

Admittedly, in 2019 it seems like a try-hard introduction to a band whose influence on rock music is now blatantly obvious. Back in the mid-’90s however, things were somewhat different…

The very idea of Kerrang! covering a band that had emerged from the rave scene and that had recently won MTV’s Best Dance Act award was decried as nothing short of heresy by certain members of the rock community – some of whom were still busy lamenting the fact that hair metal had been killed by grunge.

The Prodigy themselves didn’t much care about the sniping from rock’s sidelines. Nor did we at Kerrang!. In our world, labels like Chicago’s Wax Trax (home to KMFDM, Front 242 et al) and artists like Nine Inch Nails had already begun to redefine rock music. The Prodigy seemed the logical extension of that hard-edged electronic sound, with the added appeal that they created irresistible beats to match.

Our aforementioned resident ‘punk thug’, Mörat, had begun to travel throughout the UK to see The Prodigy just prior to the release of their second album, Music For The Jilted Generation, and had filed a number of increasingly enthusiastic live reviews along the way. His editorial instinct was also reflected by the fact that certain more adventurous DJs had begun to slip the band’s most recent single, Their Law, into sets alongside tracks by Rage Against The Machine, Slayer and Fear Factory, at rock clubs across the country.

It was Mörat’s evangelical support of the band during one particular editorial meeting that led to that first proper feature and, just as Kerrang! embraced The Prodigy, so too they embraced Kerrang! – blowing out an interview with the BBC to speak to the magazine for that initial interview.

“We do have genuine roots in the rock scene. I used to go and watch The Hamsters and Dumpy’s Rusty Nuts at these biker things,” explained Keith Flint during the course of the interview, name-dropping two of the least fashionable boogie-biker bands imaginable. “Roar there, get stoned, you couldn’t ride home, so you’d get pissed and stay the night sleeping beside your trusty steed, all that kind of thing.

“I just loved that kind of thing. I just loved the energy. You take Speedway (from the band’s second album, Music For The Jilted Generation), put it on your Walkman, and get on your bike. The two match perfectly. It’s energy!”

That feeling of unbridled energy is what lies at the heart of The Prodigy’s sound. A sound that is a glorious hybrid of post-hip-hop beats married to techno’s drive and punk’s original invective – all of which are mixed in Liam Howlett’s head with added sonic detail thrown in for good measure.

If Liam is the band’s studio mastermind, then Keith Flint was vital in projecting those musical ideas on to an audience. Part-clown, part-punk, part-court jester, he provided the band with a live focal point alongside their charismatic MC, Maxim, and 6ft 7in dancer Leeroy Thornhill.

Three months after their first appearance in the pages of Kerrang! everything changed for The Prodigy with the release of Firestarter, the first single from the band’s forthcoming album, The Fat Of The Land. The accompanying video was bleak and mesmerising, and featured Keith in the starring role, singing the song in a derelict London Tube tunnel.

In a year where the likes of The Spice Girls and Peter André topped the singles charts in the UK, the fact that Firestarter enjoyed a three-week stint at Number One proved a defining event in British popular culture in the ’90s.

The song’s success suggested that music could still rise from the underground to achieve mass success. But this wasn’t even normal music. The image that Keith Flint projected in that video underlined that this was music made by freaks and rank outsiders. In fact, Keith had cast himself in the same mould as the likes of Alice Cooper and the Sex Pistols’ Johnny Rotten – a comparison that he most enjoyed.

The video ensured that Keith was transformed almost overnight into one of the most recognisable frontmen of his generation. Added to the recognition came the controversy with the track’s lyrics, The Mail On Sunday suggesting that they advocated arson and leading the campaign to ‘Ban This Sick Fire Record’. If certain quarters refused to air the track or the video, it just seemed to make it sell more, the band shifting over half a million copies in the process. Suddenly and rather unwittingly, The Prodigy – and Keith in particular – were pop stars.

As the band prepared to release Breathe, the follow-up to Firestarter, they attempted to retreat from the public eye, and stopped speaking to the press. Mörat’s ongoing relationship with them however saw him secure an exclusive interview backstage at Reading’s Rivermead Centre on the final night of their UK tour. The resulting piece was too good not to run as a cover story, capturing the band as they reflected on their newfound notoriety and increasing success.

“We don’t want to appeal to everyone,” remarked Liam, before adding, “It’s good for Kerrang! to write about the band ‘cause that’s opening up a lot of minds.”

Keith echoed that sentiment, underlining the band’s unique place in music. “One of our blessings in disguise is that no-one could ever really put a name to what we do,” he said, before reflecting on the highs of the band’s performances, as well as opening up about his own insecurities.

It is true to say that Keith enjoyed the band’s success. Even the briefest of encounters would leave you in no doubt that the man felt incredibly privileged to be travelling the world while playing to increasingly huge audiences.

The band’s success increased even further with the release of The Fat Of The Land, their third album in June 1997, with Flint appearing on four key tracks (Firestarter, Breathe, Serial Thrilla, and a re-working of L7’s Fuel My Fire). The album proved to be a global success, hitting Number One in the U.S., UK, Germany and Australia. Just prior to its release, the band appeared on their second Kerrang! cover, the hand-tinted live shot of Keith that graced it by Ross Halfin echoing Edvard Munch’s iconic image, The Scream.

As 1997 came to a close, Kerrang! writers voted The Fat Of The Land only second to the Foo Fighters’ The Colour And The Shape in our year-end poll. Put simply, the album had cemented The Prodigy’s position as one of the pre-eminent bands in Kerrang!’s world and they had, against all odds, managed to unite two very different types of music fans – ravers and rockers – in the space of less than 12 months.

Musically, they had created an album that was cut across genres at will, and – now with the added reinforcement of guitar player Gizz Butt (ex-English Dogs and Janus Stark) in their ranks – they also had a live show to match their muscular musical approach. As anyone who saw them live at that point will recall, Keith Flint had grown supremely in confidence and was now established as their onstage ring-leader.

Offstage Keith was by far the most approachable member of the band. While The Prodigy had developed their own gang mentality and suffered fools lightly, Flint was a welcoming and witty presence – his use of one-liners, at times disarming.

It has been close to 25 years since that first feature on The Prodigy ran in Kerrang!. In that time, their impact on the rock scene has continued to grow. You can hear it in the music of endless contemporary acts ranging from Enter Shikari to Bring Me The Horizon and Run The Jewels. Similarly, the rock audience’s acceptance of the band has been underlined by countless appearances at Download, most specifically their mind-blowing headline appearance in 2012.

In all of that time, The Prodigy have remained a fiercely independent proposition, with Liam making music on his own terms. They have also been at their best when Flint is actively involved in the band: his presence adding a definite edge to their sound.

Back in the summer of 2006, I had the pleasure of presenting The Prodigy with a Kerrang! Award that celebrated their longevity, impact and independence. Backstage afterwards, the band conducted a quick interview with a film crew.

“We’ve got loads of respect for Kerrang! you know. All the way from ’94, they were always there for us,” said Liam.

“We’re not here to just cruise around picking up awards, because we think we’re cool,” said Keith. “We’re here for a reason because we’re supported, because it was real, otherwise fuck everything else. It’s just not us.”

In many ways, that final comment sums up Keith Flint: a man who prized loyalty and authenticity above most things, and who despised the very idea of celebrity. Now, 48 hours since the shocking news of his passing was confirmed, it seems so hard to imagine that he is actually gone. How we will miss him…