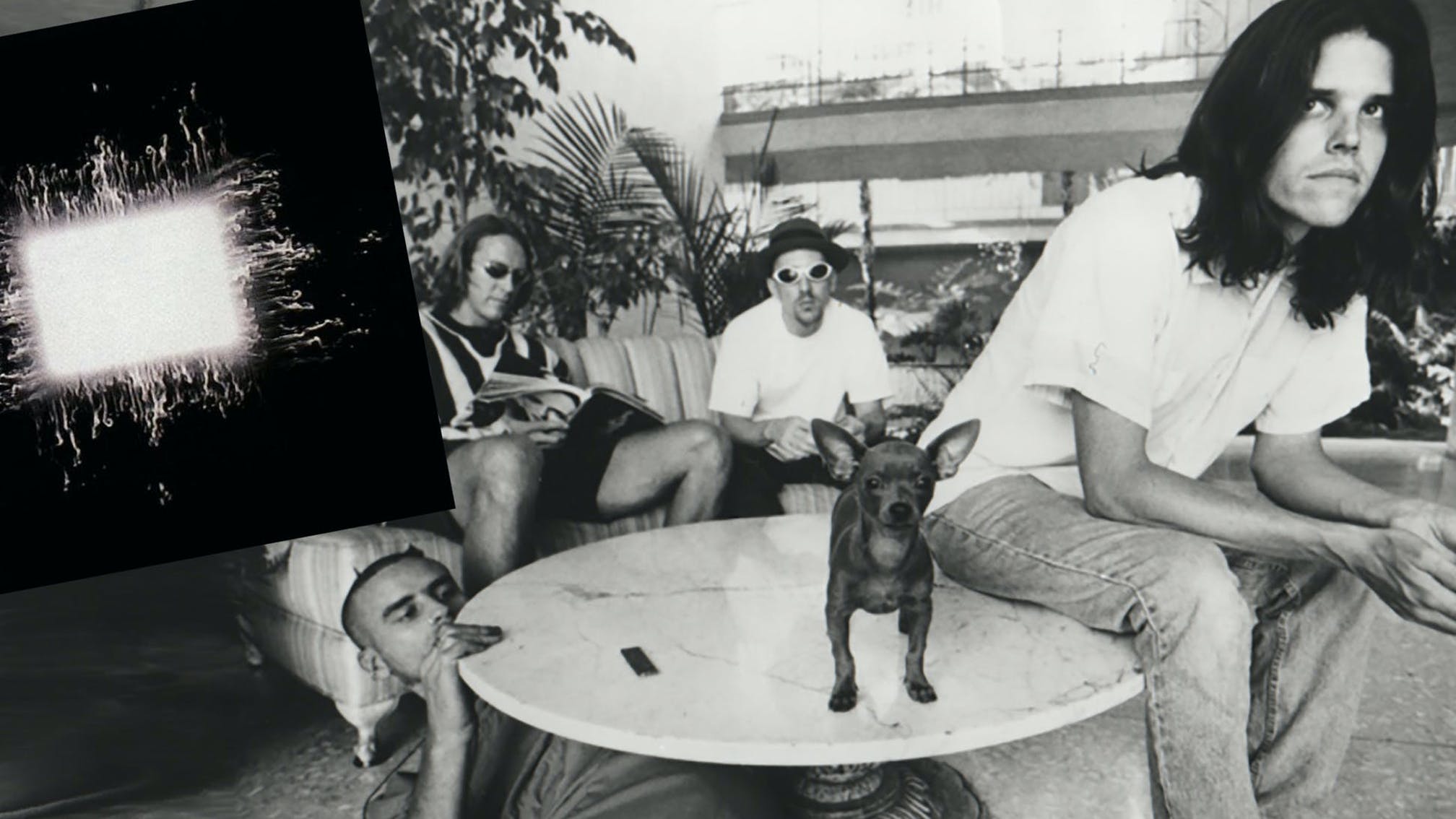 Although their music landed without a hint of fratboy puerility, Tool didn’t even try to hide their mischievousness. If people were too blind – or simply too stunned – to pick up on the title Stinkfist, singer Maynard James Keenan’s cheeky (cheek-splitting?) chorus refrain of 'Relax, turn around, take my hand…' laid the meaning grubbily bare. Taking the piss? Amateur. These lads were dragging out the shit as well...

The stony-faced solemnity with which critics and high-minded art-rock aficionados approached Ænima regardless said a lot about where the Los Angeles quartet found themselves in the mid-’90s. Stunning debut Undertow had announced them as one of the most fascinating, unmistakable, downright virtuoso voices in alternative music. Its seven-figure sales ensured they were also one of the most instantly recognisable. People thought they had a handle on the mind-mangling rhythms, the heavy grooves, the vitriolic vocals, the subliminal darkness on which they were afloat. A post-Cobain grunge collapse had made vacant the throne onto which so many believed Tool should ascend – as the furious new voices of Generation X.

If anything, Ænima was a purge. This was a record to weed-out the uninvested part-timers and bone-headed mosh bros who would quickly up sticks for camp nu-metal. It was an album for the weirdos, the intellectuals, those actually clever enough to get in on the joke. “It’s about change,” explained Maynard in one 1996 interview, “cleaning out the house to refurbish or redecorate and start over.”

The music more than matched up.

Although, sonically, the aforementioned Stinkfist was a reasonably accessible way in – its spring-loaded riffage and fist-pumping chorus harking back to the most accessible of their earlier material – it was but the calm before the storm. Or should that be the storm before the calm?

Eight-and-a-half minute follow-up Eulogy was the bridge into strange new territory. A vast soundscape of distorted ambience punctuated by peaks and troughs of rage and catharsis, its apparent focus on Jesus has been explained away by the band themselves, who insist it’s actually an(other) indictment of Scientology founder L. Ron Hubbard. Third track H. pushes the expansiveness even further, with Maynard showcasing contemplative, soulful sides to his performance that had thus far gone undiscovered as he grappled with the self-perpetuating cycle of abuse.

From there, we’re spun off on a confrontational odyssey. Forty Six & 2 deals gets the brain-juices pumping as we ruminate on matters of human evolution. Current DNA, see, contains 44 autosomes and 2 sex chromosomes. It’s believed that our next evolution – or mutation, depending on how open your mind – will be the progression to 46 autosomes.

Fittingly, the song was also a showcase for what remains the band’s most significant internal development: the replacement of original bassist Paul D’Amour with London-born, ex-Peach four-stringer Justin Chancellor. Compared to his predecessor’s somewhat more staccato attack Chancellor was a pure bassist, leaning into the smooth depths his instrument could unlock. Drummer Danny Carey branched out an already intimidatingly expansive kit, too, with the addition of electronic pads, including the Simmons SDX.

Recounting (or perhaps imagining) the salty exchange between Maynard and an entitled, arsehole fan who’d accused the band of ‘selling-out’, provocatively-titled highlight Hooker With A Penis unfolded as a cutting comment on the commodification of Gen-X culture. 'All you read and wear or see and hear on TV is a product begging for your fatass dirty dollar, so shut up and buy my new record…' the singer rages over sounds that knowingly harked back to the band’s harder-edged past. It was no coincidence that by their headline run at Lollapalooza ’97 – a festival buckling under its own ‘sell-out’ status – the song had been promoted to regulation set-opener.

The interstitial interludes peppered throughout the release were loaded with playfulness. Not only did they pad the album’s 78-minute run-time out to almost the full capacity of a single CD (yeah, there’s a reason these records only just made it onto streaming services…), they gleefully pointed back at the listener – daring us to snigger along to jokes at our own expense. Useful Idiot, placed at the end of one of a side on the actual vinyl release (which arrived two weeks earlier than CDs and cassettes) was simply 38 seconds of the sound of a needle skipping out at the end of an old-fashioned LP. Message To Harry Manback was a blurred voicemail, apparently from one of Maynard’s inexplicably-infuriated houseguests. Die Eier Von Satan seethed with industrial threat, playing on listeners’ simple ignorance and ingrained prejudices against Teutonic rhetoric. The stern German voice, rallying crowd-noises and pounding hydraulic press came across like the last testament of some Nazi leader. In reality, it was just Marko Fox – bassist for Danny’s electronic side-project ZAUM – reciting the recipe for a cannabis edible.

That frivolity threw into stark relief the album’s darker moments. Jimmy, for instance, is another deeply personal cut, that’s been referred to as a sequel-of-sorts to Undertow’s Prison Sex. Referencing Maynard’s troubled upbringing 'Under a dead Ohio sky…' and perhaps referring to the departure of his mother: 'Eleven and she was gone, eleven when we waved goodbye…' Amongst the dizzying maelstrom of mind-bending musicianship and twisted insider references, it’s an open wound that jarringly cuts through.

The last two tracks form something of a closing-act and tribute to departed friend and comedian Bill Hicks, who had collaborated with the band briefly during the Undertow process but passed away from pancreatic cancer two years earlier. Indeed, the album artwork features a painting of Hicks dressed as a doctor – standing over what appears to be a stricken Maynard – alongside the caption ‘Another Dead Hero’.

The title-track-of-sorts Aenema (spelled slightly differently, for reasons best known to the band, but perhaps because of the song’s more purgative content) was a riff on Hicks’ famous ‘Arizona Bay’ rant where he wished for the San Andreas fault to split and the state of California to be flushed into the Pacific ocean. It features a scathing roll-call of all the folk and features of The Golden State that Maynard can live without – from 'L. Ron Hubbard and all his clones', to those 'gun-toting hip gangster wannabes'.

Perhaps even more significantly, epic 14-minute closer Third Eye opens with a direct sample of Hicks’ The War On Drugs monologue. "See, I think drugs have done some good things for us, I really do,” the inimitable drawl rolls out. “And if you don't believe drugs have done good things for us, do me a favour: go home tonight and take all your albums, all your tapes, and all your CDs and burn ’em. ’Cause you know what? The musicians who've made all that great music that's enhanced your lives throughout the years? Real fucking high on drugs…"

A multi-part exploration of the spiritual benefits of psychedelic substances in opening the pineal gland – that proverbial ‘third eye’, deep in the centre of the brain – it was a sprawling statement of intent from a band ascending to another level, both in terms of enlightenment and success.

Rolling towards the 21st century, it felt like Tool were pushing thrillingly against the grain of a self-serving society unwilling – or unable – to embrace the opportunity of change. Hicks had it right: "It's not a war on drugs, it's a war on personal freedom.” And, within that, far too much of pop-culture had proven themselves complicit.

Ultimately, Ænima was a confirmation of Tool as the band unafraid to take a stand.