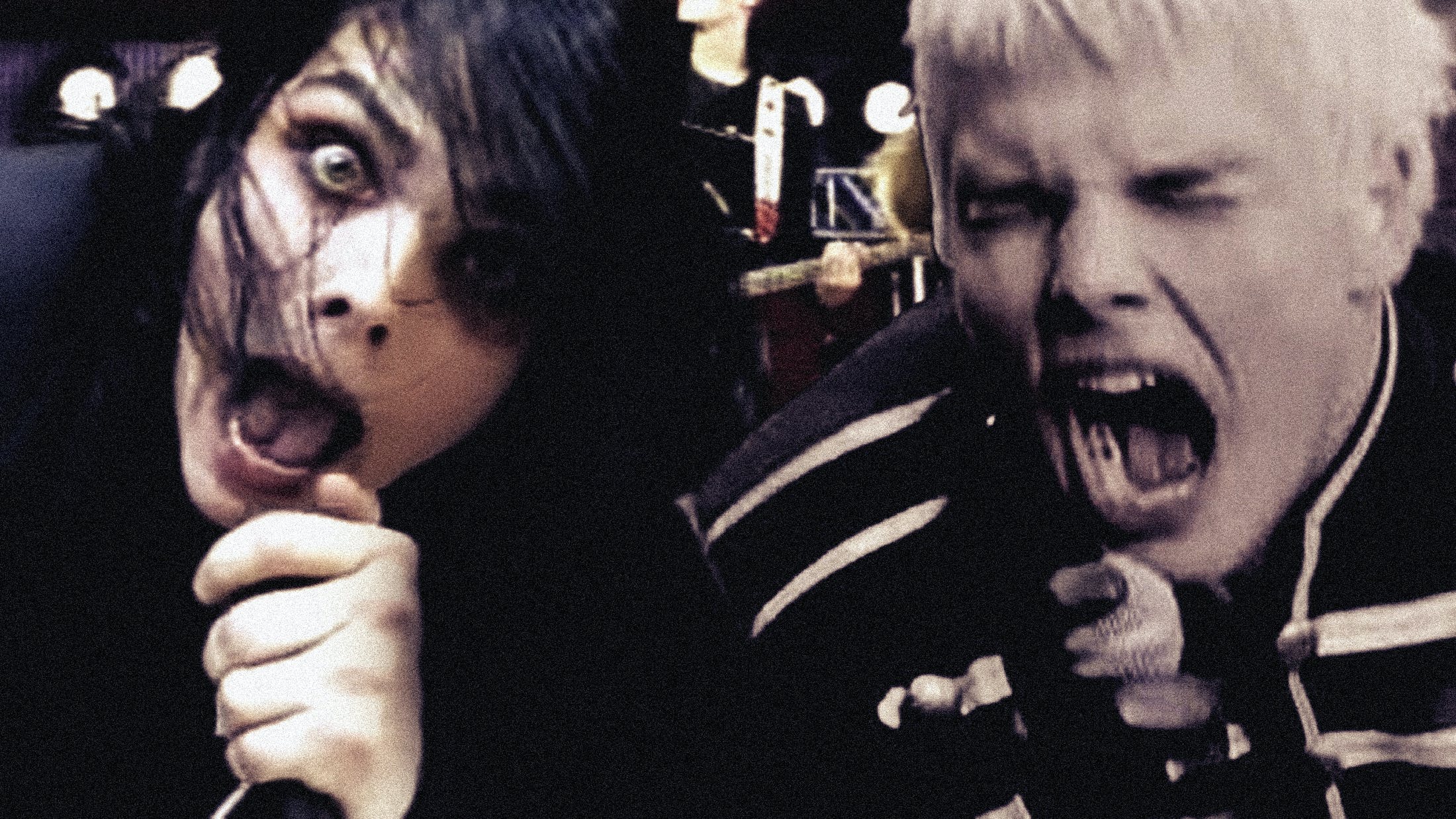 Let’s be real, this debate could be ended pretty much immediately by simply posting this gif. You probably knew which gif that would be without even clicking, too, didn’t you?

Like a digital mic drop, it would be a savage and swift lesson to my esteemed colleague Emily Carter, who no doubt makes some salient points in her case for The Black Parade. But unfortunately for her, she ultimately finds herself on the wrong side of history here. Sorry, Em. Three Cheers For Sweet Revenge is the best My Chemical Romance album.

Why? We’ll get to that. Sort of. First, a disclaimer: The Black Parade is a towering achievement – a record that defined a generation, changed and saved lives, and transformed the New Jersey emo contenders into the emo scene kings the world still pines for the return of to this day. If any of that sounds self-defeating stick with us for a second. This is merely highlighting a belief that both of these albums are damn near flawless in their own ways.

It’s all about Three Cheers… though. Three Cheers… is just next level good. There’s a viciousness, a spite, bile, sass and style about it. With those 13 tracks and 40 minutes, that band captured lightning in a bottle; a moment in time where they sparkled and flashed brighter and bolder than anything and everybody else around. Debut studio album I Brought You My Bullets hinted (a bit) at what they were capable of in 2002, but only in the sense that the caterpillar goes through a process of metamorphosis to become a butterfly. When Three Cheers… emerged two years later, it was like its creators had been born anew.

Imagine – just imagine – announcing the dawning of your new album, your new sound, new image, and new everything with the single and video of I’m Not Okay (I Promise). It’s pretty much the song of the decade and absolutely the song of that era. And yet it still goes off on rock club dance-floors to this day. It still sounds brand new despite all the years and spilt beers in between.

“You like D&D, Audrey Hepburn, Fangoria, Harry Houdini and croquet. You can’t swim, you can’t dance, and you don’t know karate…”

As you’ve probably seen elsewhere on the internet – you read that in Ray Toro’s voice, didn’t you? And there’s a good reason for that. It’s an iconic clip and image amongst three and a half minutes filled with ‘em: the bullies, the uniforms, the swift kiss in the garage, the almost-kiss outside the lockers, the walk through the halls…

My Chemical Romance made being an outcast feel not so bad. They said it was okay to be yourself, flaws and all, way before that became such a commoditised and co-opted cop-out for bands with nothing of note to actually say.

Thank You For The Venom bared its teeth while Helena broke hearts and offered up a baton that The Black Parade would later run with. The Ghost Of You opened the floodgates marked ‘epic’ and redefined what this band were about. The red ink splattered across the album’s artwork invited you into its otherworldly, pseudo horror fantasy world, yet always felt rooted in the sentiments and ultra-real extremes of this one. There’s an attitude in Gerard Way’s words and his vocal delivery, a zip about the guitar licks that feel grounded in punk as much as classic rock influences. It was the perfect storm of sounds in between, falling somewhere within a musical lineage that evoked some of the finest memories and moments of Misfits, Cramps, AFI, Alkaline Trio or Queen.

It’s an album that means a lot to millions of people, within 13 songs that speak of specific thoughts and feelings experienced by a group of five wide-eyed young men from New Jersey. It made them stars beyond all comprehension or intention.

But strip away all that noise and circumstance, play that record from start to finish and what you’re left with is a band at the peak of their considerable powers, right on the cusp of becoming a genuine worldwide phenomenon. It’s the anticipation of the pinnacle that feels the most thrilling on the rise; the ascension that makes the pay-off feel so euphoric.

That’s why Three Cheers For Sweet Revenge is My Chemical Romance’s best album.

The Black Parade Is The Best My Chemical Romance Album

Some excellent, hard-to-argue-with points up there, I'm not gonna lie. In fact, I'd say I agree with 99 per cent of them. After all, Three Cheers… is an album I love more than most things in this world. But there was that tiny little one per cent that unfortunately invalidated everything else that was mentioned above, because The Black Parade is the superior My Chemical Romance record. Duh.

It's not necessarily the coolest opinion in the world. Everyone loves an underdog, and I’m not going to win anyone over here by calling the band’s best-selling and highest-charting album their greatest. I know that. But it’s fine, because The Black Parade is the peak of My Chem’s career without any of those stats backing it up anyway.

Let’s begin with the basics: Every. Single. Song. On. The. Black. Parade. Is. Perfect. More than enough has been written about its singles – the glorious, sprawling Welcome To The Black Parade, the spine-tingling triumph of Famous Last Words, the fists-in-the-air joy that comes with Teenagers’ defiant chorus (which we’ve all screamed deliriously and drunkenly in dingy rock clubs far too many times) – but anything on that album could stand proudly on its own. My personal favourite got to be the wonderfully bombastic Mama – complete with a cameo from Liza Minnelli, because of course – but my feelings towards The Black Parade’s best moments change regularly: the stomping, adrenalised Dead! is up there, with the best MCR guitar solo and chant-along section ever. As is the brilliantly operatic one-two of This Is How I Disappear and The Sharpest Lives. And, of course, there’s Cancer – Gerard Way’s heart-breaking attempt at writing “the darkest song ever”.

And sure, there’s little-to-no fluff on Three Cheers For Sweet Revenge, either. But at 51:53 in length, The Black Parade is automatically better than its predecessor by the simple fact that it beats Three Cheers in length. My Chem knew they were onto a winner by gifting us with an extra 12 minutes and 17 seconds of solid gold. SEE?! MATHS!

Admittedly I’m a little biased when it comes to Rob Cavallo’s production job across these 13 tracks (well, 14 if you include hidden gem Blood), because Rob’s worked on the majority of Green Day’s albums – and they’re my all-time favourite band. But that doesn’t take away at all from the fact that it cohesively, thrillingly and timelessly enhances The Black Parade’s overarching conceptual storyline, following the main character, The Patient, who is dying with cancer. It's the perfect joining of forces between sound and concept – something very few bands do to such a high standard.

I've already waffled enough, so it makes sense to recruit some help from Mr. Gerard Way to conclude my argument (which is possibly cheating, but whatever). Speaking to Kerrang! in 2014, the frontman revealed of his ultimate intentions before making The Black Parade: “I wrote down titles of records, what they were going to be like and what they were going to accomplish for the band. I never went past the third record, because to me the third record was the pinnacle – it was the combination of everything we had learned on one and two but really taken to some crazy extreme. That was Black Parade, and when the tour basically ended with us conquering the world, we were supposed to ride off into the sunset. I can’t think of a better ending than that.”