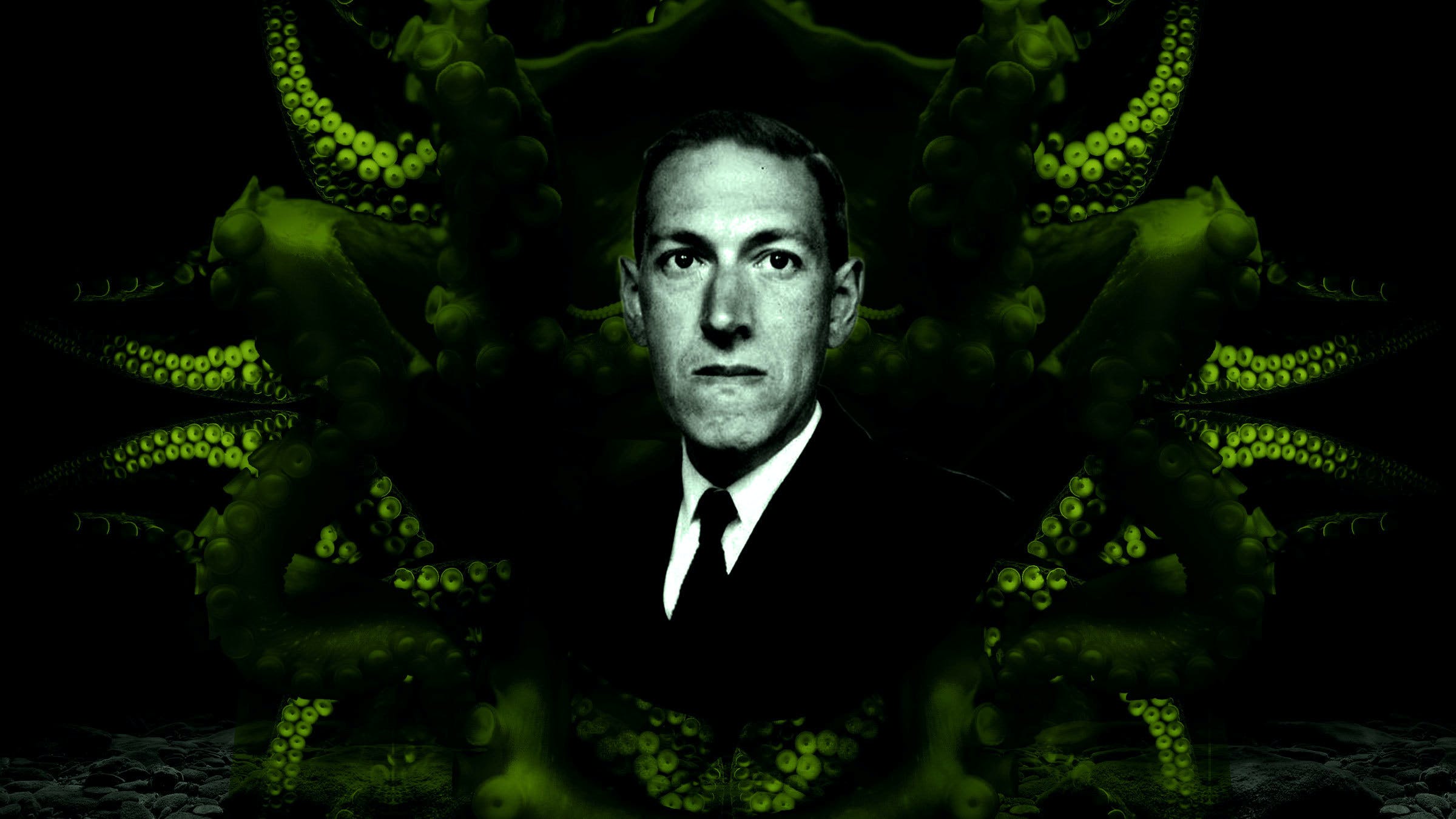 What might surprise typical reactionary parents to learn is how literary most heavy metal music is. For metal fans, classic literature is the rare first demo tape of pop culture, providing the original text from which everyone’s favorite monsters and myths stem. But while bands have been inspired by everyone from infamous British poet Samuel Coleridge to gonzo doctor of journalism Hunter Thompson, it’s horror and fantasy literature that have most enthralled metalheads since the genre’s birth. And few horror authors have inspired more heavy metal songs than American sci-fi/horror pioneer H.P. Lovecraft.

As a person, Howard Phillips Lovecraft was not all that metal. In fact, Lovecraft was extremely delicate and an inveterate racist, whose work expressed overwhelming anxiety over black people, Asian people, white people who weren’t from a reputable European background, and vaginas of any kind. He hated liquor and tobacco, and basically assumed that anyone from outside of New England was a degenerate. But while Lovecraft’s character left much to be desired, his literary creations, along with the sense of scope and boundless imagination behind them, were vital the heavy metal’s development.

In Lovecraft’s cosmology, humanity lives on the ruins of a horrific prehistoric age, during which hideous amphibious creatures and giant fleshy gods roamed freely, using their magic and superior intellect to construct cities and technology we can't even imagine. Most famous among these is Cthulhu, a towering squid-headed beast who lives in the sunken city of R’lyeh. Also occupying this bizarre menagerie is the pustule-god Yog Sothoth, the crawling chaos Nyarlathotep, the aquatic deity Dagon, and any other number of monstrous creatures covered in tentacles and scales. With practices that mingle science and magic, these beings all pursue their one prime directive: return to our world, wipe it clean of carbon-based life, and reclaim their position as its rulers.

READ THIS: Skinner's doom metal art is a Lovecraftian dream

On a simple level, Lovecraft influenced metal with his sense of large-form destruction. His was a world of ancient Godzillas, each one readier to destroy Tokyo -- or in his mind, probably his hometown of Providence, Rhode Island -- than the last. On top of that, Lovecraft provided a strange, mutated alternative to typical black magic, in which priests bathed naked in bizarre pre-Christian goo to honor a giant cuttlefish, rather than, say, light another candle to summon another talking goat. But for extreme metal, it was Lovecraft’s all-or-nothing darkness that made the biggest impression. Not only did his gods hate people, but they wanted nothing more than to destroy every last human being on earth.

Today, on his 130th birthday, we look back on some of the heavy metal tracks most inspired by H.P. Lovecraft’s bizarre tales. Ia, ia, Cthulhu ftagn!

In Lovecraft’s short story Beyond The Wall Of Sleep, a “decadent” mountain man committed to a mental institution is revealed to be a noble being of astral light in a different world. The tale echoes Lovecraft’s fear of going insane -- both of his parents died in the same asylum, some two decades apart -- and his hope that behind even a broken mind is a noble spirit. For Sabbath, the song seems to be much more about shaking off your mortal shell and attain astral projection in the form of high-grade acid. Hey, maybe if H.P. had dropped a tab now and then, he wouldn’t have been so damn racist.

One of late bassist Cliff Burton’s greatest pieces of input within Metallica was his fascination with H.P. Lovecraft. The cosmic horror of the author’s work appears on several songs, such as The Thing That Should Not Be. But no track better exemplifies the band’s love of Lovecraft -- and better captures the looming size of Lovecraft's unholy monsters -- than the instrumental closing number of 1984’s Ride The Lightning. Who needs words when something is so horrific it drives you mad at the sight of it?

READ THIS: The 17 greatest songs based on books

One horror story that people sometimes forget was written by Lovecraft is Herbert West - Re-Animator, the tale which Stuart Gordon adapted into his infamous 1985 horror-comedy. The movie became an instant classic due to its madcap gore and reimagining of the zombie genre. On their self-debut, Texan proto-death metal crew Rigor Mortis pay homage to Lovecraft’s tale (and perhaps more likely Gordon'sfilm) with a whirlwind of buzzsaw riffs and shout-along choruses. Cat dead, details later.

No death metal band has paid more homage to H.P. Lovecraft than Florida’s Morbid Angel. From the name of their guitarist -- one doubts he was born 'Trey Azagthoth' -- to their lyrical themes on pretty much every album, the band have long honored the author’s legacy and obsession with bygone myths. This manifested itself most notably on 1991’s Blessed Are The Sick, where the band moved away from more traditional horror topics and focused on the weird, squirming entities in Hell’s coldest corners.

While Cradle Of Filth’s gothic tendencies lean more towards Bram Stoker and Sheridan Le Fanu than other authors, Dani Filth obviously went on a hard Lovecraft streak in the early 2000s, with 2002’s best-of and rarities collection is titled Lovecraft & Witch Hearts. But it’s this first song from 2000’s Midian that best sums up H.P.’s horrific interior world, with lyrics like, 'Spatter the stars / Douse their luminosity / With our amniotic retch / Promulgating the birth / Of another Hell on Earth / Shadows gather poisoned henna for the flesh.' Then again, there’s a tentacle-haired vampire dude looming over the image on the cover, so leave it to CoF to try and make even Cthulhu look sexy.

While Michigan death metal millennials The Black Dahlia Murder are known for being relatable potheads, their work is filled with some of the more punishing H.P. Lovecraft imagery out there. Perhaps the most recognizable of their paeans to the Old Gods is Thy Horror Cosmic from their 2003 debut Unhallowed. The track features lines like, “We pray for the earth to open / Free you of your ageless tomb / Our knees bent in your worship / Oh great gold one, I scream for your return.” Fuck yeah, Cthulhu.

Only Death Breath, the old-school Swedish throwback metal band founded by former Entombed drummer Nicke Andersson, could make Lovecraft this hilarious. Rather than focus on the lengthy, wordy descriptions of H.P.’s stories, the band seems obsessed with the rubbery depictions of his monsters found in the films of the ‘60s and ‘70s. The result is badass death metal tunes about slime hunks and madness gods that are awesome to pump your squamous fist to.

Lovecraft’s story The Dunwich Horror, in which a backwoods witch gives birth to a pair of unholy twins hell-bent on bringing about the end of the world, was one of his few stories to be made into widely-released movie. That 1970 film is most likely where stoner doom crew Electric Wizard picked up the story, given their obsession with grindhouse horror films. That said, Dunwich is easily one of the most entertaining songs on this list, and adds a bizarre pothead element to the tale by claiming that for the sons of Dunwich, “dope numbs the pain.”

While Watain’s epic closing track from 2007’s Sworn To The Dark never directly references Lovecraft, its lyrics and tone are jam-packed with the writer’s influence. The concept they present -- of an unearthly dragon devouring time and space in a single unthinkable instant 00 is what H.P. lived for. And if he’d ever gotten a chance to witness Watain's blood-drenched live show, he might have believed that they were just the band to summon such an unholy creature.

On the opposite end of the spectrum from Watain, Septicflesh wrote a song not about Lovecraft’s writing, but about the man himself. The epic opener of their 2008 album Communion sees the Greek symphonic death metal crew speaking from the point of view of supernatural forces welcoming H.P. to the underworld. Packed with Lovecraft references, the lyrics to this song paint a bleak and shadowy picture of horror’s king of the weird being ushered into a realm bitter at him for revealing its secrets to the waking world. Should’ve written more romances, Howard!

READ THIS: 18 of the most evil songs that aren't metal

Revocation - That Which Consumes All Things

Boston death metallers Revocation have long played with Lovecraftian imagery and topics. But it was on last year’s The Outer Ones where they went whole hog, the cover of which even depicts a gooey Lovecraftian monster in a scene of cosmic reverie. While the band’s sound may not be as eldritch and bizarre as that of Morbid Angel, their dedication to the stories’ classic weirdness is refreshing, and their sheer heaviness makes the listener feel as though Cthulhu’s foot has planted directly on their face.