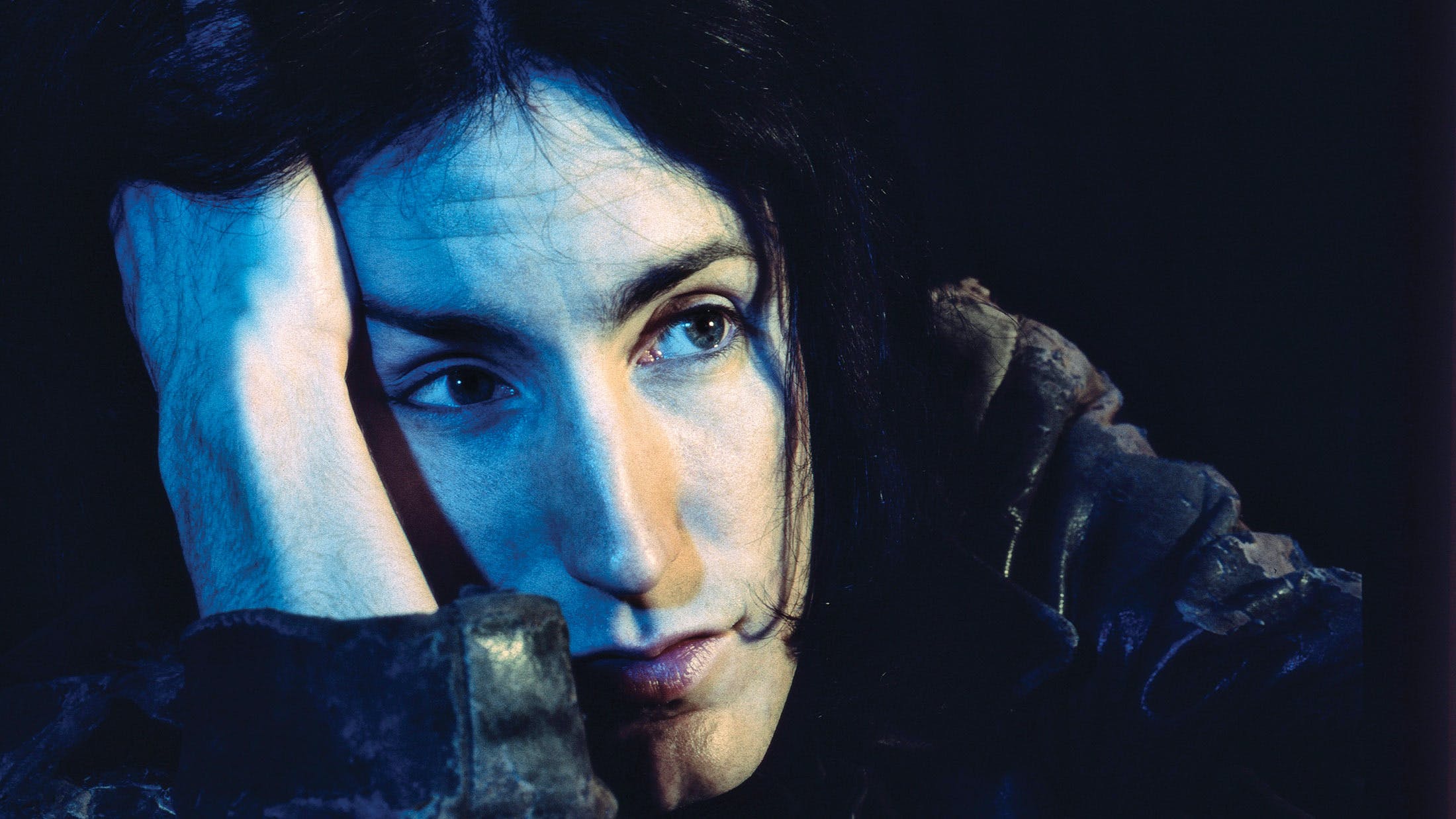 The below originally appeared in Kerrang! magazine in March 2014.

On one hand, Trent Reznor was simply giving Kerrang! a tour of Nine Inch Nails' studio. Nothing fancy, just a room-by-room stroll through 10050 Cielo Drive, Beverly Hills, Los Angeles. It's just that said gated residence was also the site of one of the most notorious murders in American history. It was here that a cult nicknamed the Manson Family carried out the murder of Hollywood actress Sharon Tate, at the behest of their leader, Charles Manson, while also slaying four other victims on August 9, 1969.

"This is the room Sharon Tate ended up in," said Trent, ushering K! writer Mike Gitter into the place in which Manson acolyte Susan Atkins stabbed a heavily pregnant Sharon a total of 16 times before smearing the word 'pig' in her blood on the front door on the way out.

"Over there was Jay Sebring. Wojciech Frykowski was out in the front yard, outside my bedroom. Abigail Folger out by the pool," Trent continued. "Yeah, it's pretty weird."

History remembers 10050 Cielo Drive primarily for this reason. It was one of the many acts that signified the late-’60s Summer Of Love – with all the dreams of peace it promised – descending into violence. But if this house marked the end of revolution, then just under a quarter of a century later it would mark the start of another.

Trent didn't know the history of Cielo Drive when he booked the house as a studio. And, likewise, standing in that room talking to Kerrang! he didn't know that the incomplete record he was discussing would become one of the most important not only of the ’90s, but of K!'s history.

By then, (Michael) Trent Reznor, a classically trained pianist, had long since shed the anonymity of his small-town upbringing in Mercer, Pittsburgh ("Going to McDonald's was our big event," he joked). He went on to work as a studio-hand, making coffee and cleaning the toilets. Next, he changed the world, forging industrial music – by fusing pulsing electronica with scuzzy metal – via Nine Inch Nails on their 1989 debut, Pretty Hate Machine. He did it in a way that shocked the world, with the extreme S&M video to Happiness In Slavery finding itself banned on these shores.

But it was the album born in 10050 Cielo Drive that made Trent and Nine Inch Nails household names. Upon its release, it would storm to Number One in the American charts, going on to sell millions of copies. And this year, that album, The Downward Spiral, turns 20. Two decades on, this 14-track, purgatorial, harrowing barrage of industrial noise remains the most resolutely anti-commercial record to ever go mainstream. Not that it was easy, mind.

Ask Trent Reznor today if there will be any special Downward Spiral celebrations from his end and his answer is emphatically short.

Is that because you don't like to look back?

"Well, yeah. When you just said it was 20 years, I had to think. 'Is it 20 years?' I'm not saying that dismissively. It's just, I think it's because I'm fucking old. I don't like to think about it! Twenty fucking years ago? Really? It seems like about five years ago to me. I was high for several…" He stops short.

"I missed some time. No, I look back at that record fondly and certainly the time in my life."

Trent is focusing on looking ahead. As he should be: having revived Nine Inch Nails after their hiatus with 2013's spectacular 5/5-rated Hesitation Marks album, this year there's NIN's huge arena tour, and a lot more besides. But while Trent may not be celebrating the past, the music world most definitely should.

"I really like The Downward Spiral," remarked Trent, upon its completion. "It was hard to do and it beat the shit out of me, but I'm proud of it. There aren't any obvious radio and MTV songs."

This was perhaps an understatement on both counts. For one, The Downward Spiral took rock music into wholly uncharted territory. It still doesn't sound like it belongs to any era of music.

From the moment that first squelching stomp of Mr. Self Destruct erupts into a buzzing surge of electronica, through Closer's infamous 'I want to fuck you like an animal' chorus and Reptile's hydraulic whirrs, this was music that sounded like it was trying to drag you into Hell. And its intensity was mirrored by the subject matter.

"The Downward Spiral was a descent," reflected Trent in 1998, with a bit of distance, "shedding skin, taking a layer off and analysing it."

Which is exactly what he did. Burying himself in themes of social control, nihilism, self-harm, addiction, depression, S&M and protest, and with nary a silver lining in sight, it wasn't an easy listen. Or easy to record. Famously, the torturous journey of self-destruction unravelling between songs on The Downward Spiral culminates with Hurt – the confessional tale of heroin addiction made re-famous (albeit in a new light) by Johnny Cash's cover in his twilight years. When Kerrang!'s Jason Arnopp spoke to Trent about it, he asked if he had genuinely been to the drug-induced suicidal low described in that song.

Trent then drifted off, unable to finish. "Don't wanna be there…" was his final, dismembered description of just how close the song had come to his own experience. And The Downward Spiral would continue to take a toll on him.

The Downward Spiral still matters. It has, after all, enjoyed a remarkable afterlife. This year alone, Asking Alexandria are likely to get a whole new generation of rock fans into NIN with their cover of Closer on the new Punk Goes ’90s Vol. 2 compilation.

The Downward Spiral has given much more than that, too. Its success gave Trent the leverage to pursue whatever he wanted, giving his own label, Nothing, a chance to work with new artists. But while others profited from The Downward Spiral, Trent suffered. When he toured the album – on the fittingly titled Self Destruct tour – the behaviour he entered into and the pressure of fame became too much.

"You're bombarded with input," Trent sighed. "Whether it be drugs or women, stimulus or ego gratification, playing or exhaustion or bad food."

"The Downward Spiral became a self-fulfilling prophecy," lamented Trent to Kerrang!’s Paul Elliott, five years on. "I wound up distorted; someone I didn't know."

NIN would take five years to follow TDS with 1998's double-album, the equally harrowing The Fragile. And even then, The Downward Spiral would once again make headlines after two American teenagers Eric Harris and Dylan Klebold, murdered 12 of their fellow students and one teacher, and injured 24 others, at Columbine High School. With Eric Harris' journals quoting NIN lyrics, once again The Downward Spiral would become synonymous with murder. A U.S. Senate hearing would follow.

But amid all this turmoil, Trent would withstand the adversity. He would escape the drugs, finding a way to ensure Nine Inch Nails remained bold, brilliant and relevant, as well as going on to win an Oscar for scoring The Social Network, with Atticus Ross, soundtracking video games, and launching side-project How To Destroy Angels. No, Trent may not be celebrating The Downward Spiral this year, but we should. There was nothing like the album that emerged from 10050 Cielo Drive in 1994. Twenty years on, there's still nothing like it.