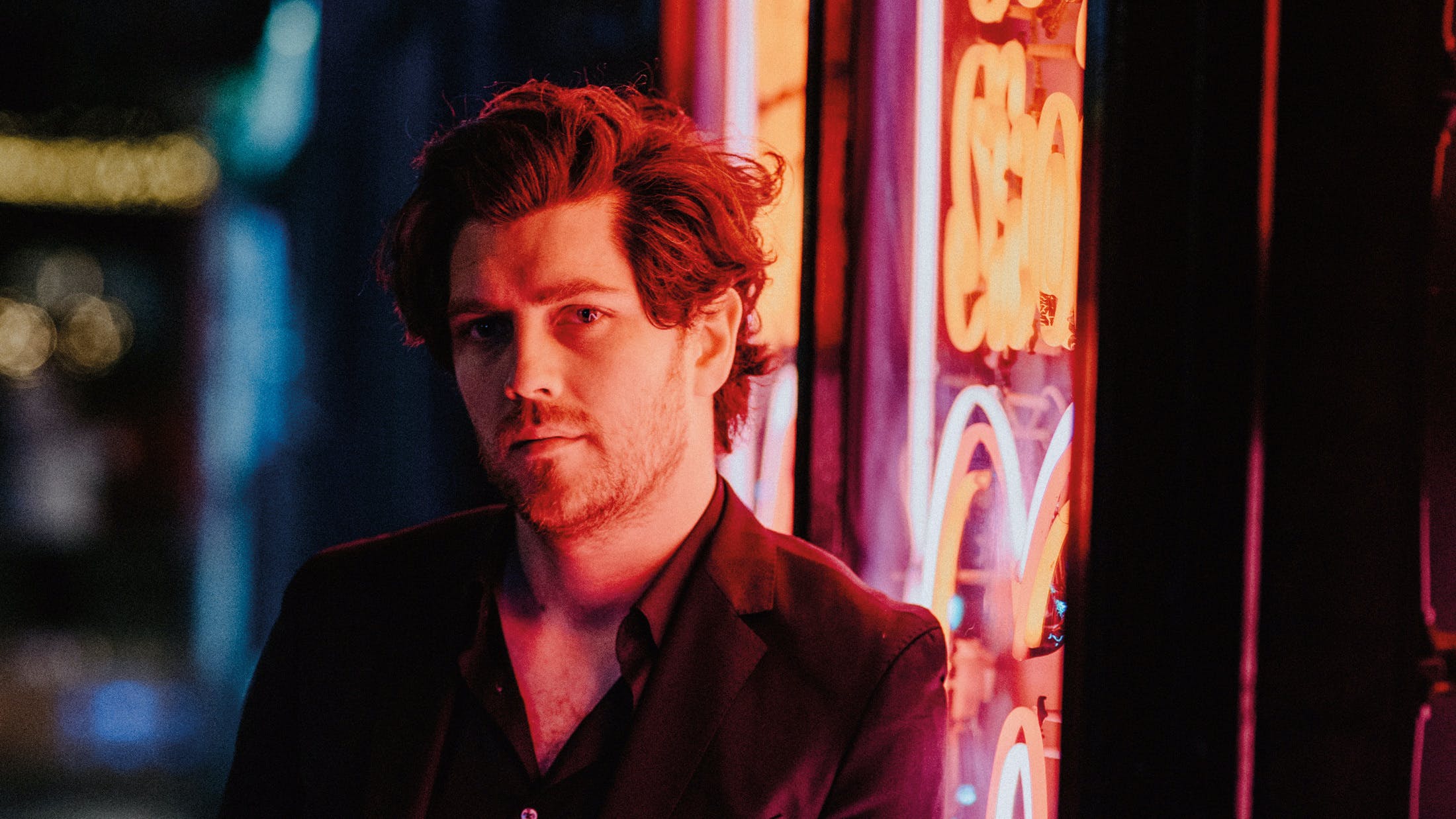 Sam McTrusty has been going through changes. In fact, there have been quite a few lately. In the four years since delivering fourth album GLA, his band, Twin Atlantic, have changed labels, built their own studio and written Power, a record that flirts with swaggering electronica. Away from his day job, the 32-year-old has also become a husband and father, and is arguably a more mature man than he was four years ago. Even if, some days, he doesn’t feel it.

“I suppose I must be, but I’m not sure,” he says, trailing off as he ponders the notion.

“I think I’m quite addicted to new experiences,” he continues. “We were signed when I was 19 years old, and then the next 11 years was like being put on a fucking spin cycle in a washing machine. But then you experience the same new thing three times and the whirlwind effect slows down, and I think GLA was a real moment of feeling comfortable in my own skin and accepting who I really was.”

Sam cites GLA as “a catalyst” for Power. Twin Atlantic’s gamble to break away from the indie-rock perfectionism of Free (2011) and Great Divide (2014), which had made them a well-known name, in favour of trusting their instincts and gutsy rock, paid off. The album entered the UK Top 10 and instilled a new sense of identity and confidence within the band, yet it also set off a chain reaction of events. They broke off their contract with Red Bull Records and switched up their management, while the grittier direction left less space for guitarist and “melody maker” Barry McKenna, who stepped down from the band in 2019.

“I still see him as my big brother,” says Sam with great affection. Barry now lends his melodic ear to creating soundtracks and will still be joining his erstwhile bandmates – Sam, bassist Ross McNae and drummer Craig Kneale – in a touring capacity. “GLA was hard for Barry, man, and we just thought it was time to accept the truth of the situation instead of trying to stay within the mould of what a band should be, in the same way that we weren’t precious about the sonic rules.”

On one hand, Twin Atlantic were down a label and a band member. Yet on the flip side, they had a newfound confidence and years of recording experience with big-name producers like Jacknife Lee (U2, The Killers). And so, the streamlined trio began pooling the instruments, recording equipment and random gear they had accumulated individually over the years. They whitewashed the garish red paint job and graffiti scrawl in their practice space, installed their gear and dubbed their new studio Bongo Land, so-called because of Sam’s habit of describing a pleasing hook or riff as “fucking bongos”.

Free from interference by any labels and with the keys to their own private kingdom firmly in hand, Sam and Ross began to tinker with new synthesisers following a carte blanche attitude to writing whatever music instinctively felt fresh and fun to the pair. “It was almost like Ross and I were two DJs rather than guys in a band,” says Sam of the songwriting process, which would finish with Craig adding kinetic energy and human idiosyncrasy to the beats. “We would just loop drum parts and come up with different riffs, then I’d sing a little idea over it and songs would organically form. And then we’d go to add something to it and the synth would be in the wrong setting, but we’d go, ‘Fuck, that’s amazing! Record that!’”

READ THIS: The 17 greatest song based on books

Sam recalls the reaction from delivering GLA to his former label as “like showing a dog a card trick”. Power may well illicit similar quizzical expressions from listeners when hearing the provocative opening of Oh! Euphoria! – a grinding mix of mechanised beats and human gasps – or the sweaty rave-up of I Feel It Too. Yet Sam argues that their shared love of Justice, LCD Soundsystem and Soulwax had crept into their music before Power – just as Glasgow’s flinty streets have proven fertile ground for grassroots rock and punk, its thriving club scene is prodigious, and Sam and Ross indulged in both. When gigs let out and the bars call time, the nocturnal revelries naturally continue onto places like the well-respected Sub Club.

“Ross was basically part of the furniture in there from the age of 18 to 25,” grins Sam, who received his own education in house and electro while while tending bar at Nice N Sleazy. “Everyone who worked there was among the coolest bastards in Scotland and I was this wee emo mosher guy,” he chuckles, his usually quiffed mop flattened by the beanie he was wearing earlier. “They really educated me. We’d finish sometimes at midnight and then go to a club, or end up at a house party, and the music those people want to hear is four-to-the-floor, because it’s like you’ve taken something.

“You get carried away, and a real theme that bled into writing this music is there’s a real fucking darkness about those nights,” says Sam, recalling the hedonism and extra-curricular activities that go with it. “There’s a crossover between this dark self-destruct mode and pure euphoric joy. That wee sweet spot fascinates me – in music and life.”

As Sam intimates, there is a duality at play on Power, between darkness and light, organic and synthetic, and even within its title. Where one person chooses to use power for good and distribute it among others, there will be another who wields influence for personal gain, stripping it from others in order to maintain their position. “There isn’t really a grey area,” says Sam. “Power is either complete light, love and hope for the future, or it’s very antiquated, overbearing and patriarchal.”

Last year, the majority of the English people voted for Boris Johnson’s Conservative Party in the general election, handing him the keys to No. 10. Meanwhile north of the border, Scotland turned over 48 of its 59 constituencies to the Scottish National Party, whose principle platform is anti-Brexit and pro-Scottish independence in diametric opposition to the Tories. As the messy divorce from the European Union breeds further rifts to the tune of liberal social media bubbles popping, divisions at home have rarely been more polarising.

“I feel like I have fuck all say in anything and Scotland has felt like that for a while in the face of two failed referendums,” sighs Sam, referring to 2014’s referendum on Scottish independence and the EU referendum of 2016.

“It’s people climbing the political ladder for their own empowerment and that element has always frustrated me. I’m not a pure Saltire [Scottish flag] waving maniac, but I think that’s why we made a record that did lean on taking control for yourself, at the same time as having some commentary on the modern world being driven by power as opposed to well-being.”

Much of this critique takes the form of religious rhetoric in Sam’s lyrics, poking fun at the cult of personality common to politics, religion and rock’n’roll. The ecstatic chorus of Volcano screams, ‘Turn it up, upside down, lift my feet off the ground,’ as an invocation of an ancient Aztec being sacrificed over a volcano, disguised as clubland euphoria. Yet elsewhere, the extremist violence that punctures Messiah’s desensitised shuffle hits close to home.

READ THIS: An oral history of the Tony Hawk's soundtrack

As a kid from “a divided family – half-Protestant, half-Catholic” in Glasgow, Sam grew up observing, often subconsciously, how the undercurrent of religious differences between neighbours shaped the city around him. Although the sectarian violence that mirrored the Troubles in Northern Ireland is largely a thing of the past, the city still bears the scars and, Sam reckons, the divisiveness of our times has reopened old wounds.

“There are still Orange walks that go through the city, and where our studio is, in Bridgeton, is the epicentre for it in Scotland,” he says, referring to the yearly Protestant marches that frequently reignite tensions. “Even when we were going into the studio to make music, there was insane turbulence in the area because of the marches. That’s something we deal with daily and then the next day there’s a newspaper saying a bridge in London was attacked because of religious motives. I’m almost anti-religion at this point, because I think it breeds more bad than it does good.”

Yet in spite of the images of religious violence and the lingering spectre of authoritarianism, Power is an overwhelmingly uplifting and romantic record. Barcelona’s lyrics are a slideshow of moments with his wife imprinted on Sam’s memory like a polaroid, and he sounds as if a weight is being lifted when he confesses ‘I’m not invincible and it hurts.’ Novocaine surges on rushing hormones and quickened synth pulses, concluding with the line, ‘You opened up the door and showed me freedom for my foolish electric heart.’ Perhaps more than the pursuit of individual power, the major theme of the record is an urge for connection in dangerous times?

“It definitely is,” nods Sam. “I mean, love is empowering. It’s the emotion that brings people together the most. Yes, we are going through a bit of a struggle at the moment where humans focus on hatred and division, but not to sound like a GCSE modern studies essay here, hope and love tend to conquer fear and hate. It’s more infectious and more believable.”

How does he feel that dynamic has shifted now that he’s a parent and is suddenly responsible for a child?

“I feel more protective and considerate, whereas before I was probably a lot more defensive and selfish,” ponders Sam, adding that he finds parenthood empowering, too. As it turns out, criss-crossing continents and stressing about your instruments turning up at the right venue is excellent mental preparation for taking your infant daughter out to the park.

“Emotionally it’s a rollercoaster, but I also feel enlightened, like I’ve earned the right to be a more volatile version of myself, rather than having ego creep out,” he smiles, a man sure of himself.

“I don’t care what people think about me as much anymore, because it’s put into perspective the things that actually matter. I’d rather be able to look back on things that I’ve created and think, ‘Well, people fucking hated that, but I loved it!’”

Power is out now via Virgin EMI.