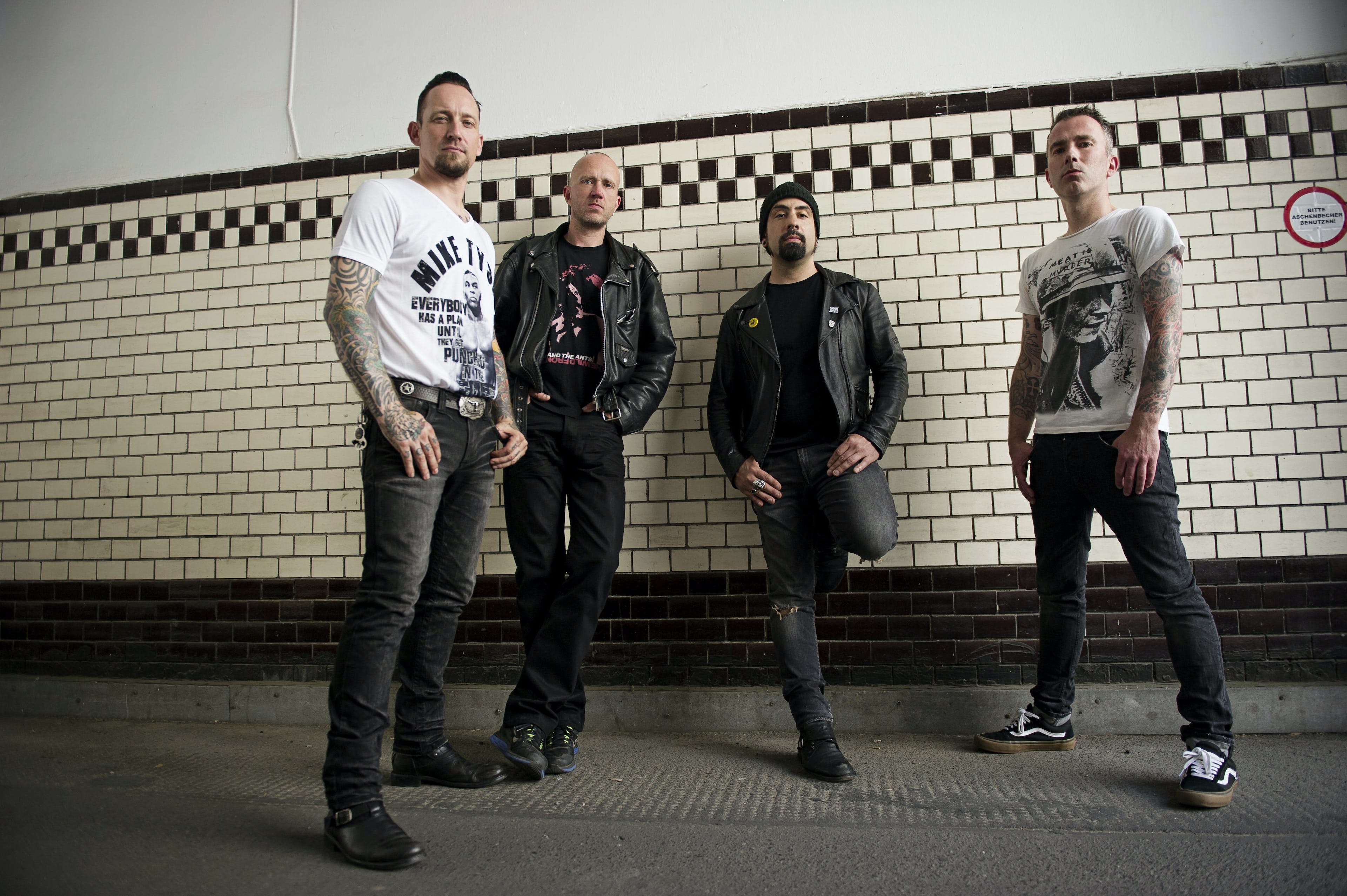 No need to fret if you missed this pyro-enhanced extravaganza, because Volbeat helpfully captured the entire thing for DVD/Blu-ray and CD. Let’s Boogie! – Live From Telia Parken is available now through Universal Music.

Kerrang! caught up with guitarist Rob Caggiano, who selected his 10 favourite songs from that historic night.

“It’s the first time a Danish band sold out Telia Parken, so it was very special and you could feel the electricity in the air when we opened with this. You could sense the anticipation, it was building up and suddenly it all let go when that pyro went off and the curtain came down. You can see us grinning at each other and sense the excitement on stage. It was just such an amazing start to the show, and I think it will always stand out in my memory.”

“This is always a real favourite of mine to play live and it was particularly good this night. Not only did we play it really well, but you can see and hear the crowd all singing along, which does make it special for any performer. It’s probably our most popular song in the UK? I actually didn’t realise that – but I think that’s awesome. It’s a really fun one to play, and it came out especially well at Telia Parken. It’s fair to say that it’s especially fun for me, 'cause the solo is great to play.”

“We played this ninth on the night but it really stands apart in my memory. This one goes back to 2010 which is before I joined the band [in 2013], and I think this was only the second time I played it live. It was a bit nerve-wracking, because we hadn’t even been playing this on the tour – it was put in specifically for this one special show. I remember going over and over it in the dressing room and getting a bit stressed out, but in the end it came over really well. We also had Mille [Petrozza] from Kreator come out and do guest vocals, as he did on the record, and he’s awesome. It’s always great to have a legend like that onstage with us. We also had our friend Rod Sinclair on banjo. He’s actually one of my favourite men, ever. He’s from Scotland and he’s really funny and a bitchin’ banjo player. We took him out for the entire tour – he’s a lot older than us and remembers music from a whole different era, and it was so cool to have him standing up on the tour bus telling us stories.”

“This is a more emotional song and we did something really special with it on the night. On the original recording we have the Harlem Gospel Choir singing with us, and when we play the song live we have the choir on tape. On this occasion we had a lot of our crew guys dress up like the choir and go up on the ramps over the stage. That’s not the real choir; that’s the crew (laughs). A lot of people might have been fooled into thinking it was the real thing. Also with that song, Michael [Poulsen – frontman] dedicated it to the memory of Chris Cornell and Chester Bennington. It’s definitely a heavy song in that sense. We keep losing these legendary artists and musicians, and I wish that would stop. When we play that song now, it takes on a whole new meaning.”

“We were testing the waters with this new track. At this point we had hardly played it at all so we were still working on it in rehearsal and soundcheck, and I think the Telia Parken show was the first time that it really came together. The solo was totally improvised – I made most of it up on the night as we were playing it, but it seemed to come off well. I’m excited about this track and it’s definitely gonna be on our next album. It’s a fun one to play because it kinda switches gears throughout – it keeps you on your toes.”

“The title is Danish and means ‘forever’. This song was a massive hit in Denmark [it reached number 3 in 2016 and is Volbeat’s biggest homeland hit to date], so when we played this at Telia Parken the reaction was completely explosive. We also had our friend Johan Olsen [from Danish rockers Magtens Korridorer] sing the chorus with us – Johan sung on the studio version too, and really adds something great to it. As well as Johan we had Rod Sinclair on stage again, plus additional vocals from Mia Maja, so to us it felt like a celebration. It was magical to bring everyone together like that. It’s one of those cool songs with a strong melody and a thrilling vibe. Even though the chorus is not sung in English, people seem to connect with it all over the world.”

“This was my favourite part of the night for sure, as we had none other than Metallica legend Lars Ulrich come out and play drums for us on two tracks. First we did this, which is a Volbeat classic from the old days, and then we did a cover of Enter Sandman. Guitar Gangsters always goes down great and is a ton of fun to play. Thinking back, it’s one of the first songs that got me hooked on Volbeat, long before I joined the band. Enter Sandman was quite exciting because it actually isn’t something we’ve played before and we had hardly rehearsed it. We buckled down and tried to learn it, but the only time we got to play it in advance was a couple of times at soundcheck. Luckily Lars knows the song quite well (laughs). It was obviously phenomenal to perform with him on stage – I couldn’t believe what was happening really. We love the guy, and it goes without saying that Metallica have been a massive influence on us.”

“This features our really good friend, Barney Greenway from Napalm Death. Every time we play in the UK, if Barney can physically be there, we always bring him out for this song. If his own schedule permits, he comes out on the road with us and we do this song every night. It’s a really special thing for us, and believe it or not everyone in Volbeat is a huge Napalm Death fan – they’ve been such an influential band over the years. He’s so friggin’ loud when he does his growls – it’s insane and inhuman! It’s a crazy contrast with his vocals and Michael’s, but it really does work.”

“To make this a bit special, we had the Danish boxer Mikkel Kessler come out on stage with us. He’s another Danish hero – the idea was to have him walk out punching the air as if he was on his way to the ring. In fact, part of our stage set down the runway was designed to resemble a boxing ring. Things didn’t go completely to plan because the lights didn’t catch Mikkel too well as he came out, and later some very smokey pyro went off and made Michael cough. He saw the funny side of it though.”

“This one features Danko Jones who is a huge friend of ours. We love what he does, and it was great to work with him on this track, and have him guest with us at the show. He’s been on the road with us a lot over the years. His voice fits perfectly on this song, and it was an honour to have him up with us on stage, doing his thing. Having so many friends and guest artists with us that night made the whole thing feel like a great celebration of how far Volbeat has come to date. It did feel crazy to play a headline show to that many people, but we love what we do, and we’d be doing it no matter how many people came to see us – that’s the kind of band we are.”

Let’s Boogie! – Live From Telia Parken is available now through Universal Music. Check it out on the stream below.