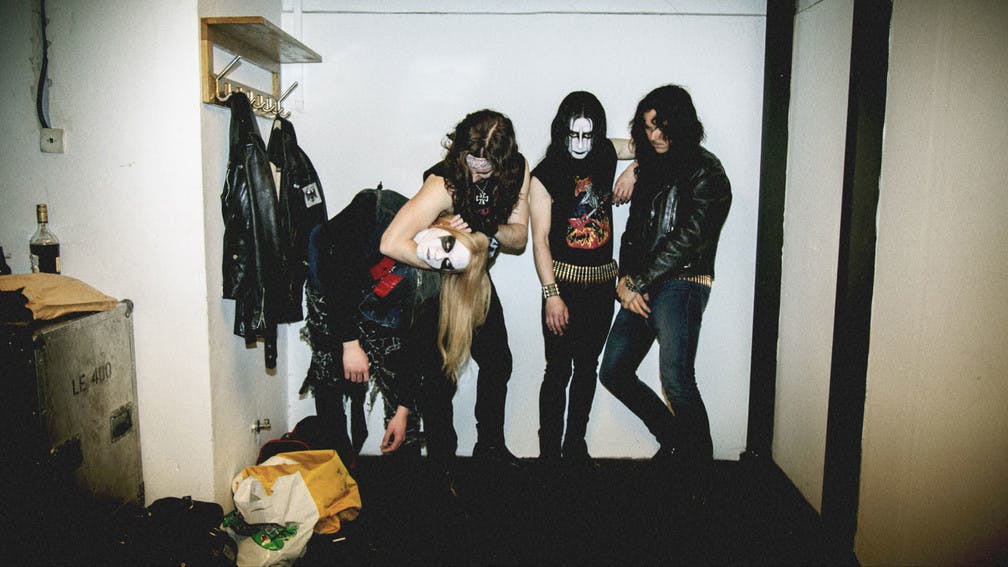 There’s no Brexit, but what is definitely happening today is the UK theatrical release of Lords Of Chaos, Jonas Åkerlund’s tackling of the story of Norwegian black metal. While the director’s attention to detail when it comes to shirts, stickers, posters and settings has been widely praised, the film’s declaration that it is “Based on truth and lies” is an open admission that some elements of the story have been treated with a level of artistic license.

But for those wondering what really happened, here’s a few pointers in the right direction for the truth…

In Lords Of Chaos, the character of Ann-Marit is one who brings out a more normal, sensitive side of Euronymous, eventually becoming his girlfriend. In reality, she never actually existed – an example of the film’s coda that it is “based on truth and lies”. There were several women in Euronymous’ life – including a Swede named Ilsa Raluce Anghel, who had also been connected to Varg – but she was not around in the capacity of the fictional Ann-Marit.

And She Didn't Take Those Pictures Of Euronymous

The photos of a cloaked Euronymous with a sword are some of black metal’s most striking images. In Lords Of Chaos, they are the product of Ann Marit’s camera, taking the pictures before she and Euronymous go at it. The shots were actually captured by Varg.

Varg's Entrance To The Scene

In the film, Varg’s introduction to the Norwegian black metal scene is an awkward meeting in a kebab shop following a Mayhem gig. Coming from Bergen, a good six hours’ journey from Oslo, the chances of him turning up unannounced at a show with no ‘in’ to the scene are slim. Prior to meeting Euronymous and the rest of the players in the Oslo scene in March 1991, Varg had been in contact via letter, and had actually posted Dead the ammunition which he would later use to shoot himself.

Since the film first hit screens, Varg has taken to YouTube to straighten out various points about his portrayal. Most important among which, obviously, is whether he was a fan of German metallers Scorpions, a patch of whom he is mocked for wearing on his jacket by Euronymous at their first meeting, and whom he later notes are absent from a pile of records he buys from Helvete. Actually, he never liked them. All of which seems a little harsh on Scorps, to be honest…

The only church burning conclusively linked to Euronymous is Holmenkollen, on August 21, 1992, in which Varg and Emperor drummer Faust were also involved and later busted. However, there is no record of Euronymous and Varg torching the church they have at earlier in the film. The failed bomb with which the pair attempt to explode it is based in truth, although it was used at Holmenkollen. When Varg explains to Euronymous that the church they’ve just broken into was once “A sacrificial altar to Odin,” it is based on his comments he gave in the book of Lords Of Chaos as to the significance of the burning of Fantoft Stave Church on June 6, 1992 (of which he is was a suspect, but never convicted). The date was also the anniversary of the first known Viking raid in history in 793, on Lindisfarne in Britain, which Varg said was significant.

Nobody Ever Called Themselves 'Lords Of Chaos'

The title of the book wasn’t a reference to anything any of its constituents said, a lyric or album title, or as shown in the flick, growled into a mirror. It actually came from a group of American teenagers who had killed their teacher, with no connection to black metal.

Euronymous Didn't Cut His Hair Off

Though used in the film as a device to indicate how Euronymous was trying to distance himself from the scene (about which, according to Varg in the Lords Of Chaos book, he was beginning to get cold feet), the cutting of his own hair didn’t actually happen. His long hair was cut by the coroner who tended to his body after his murder.

Lords Of Chaos is out now.