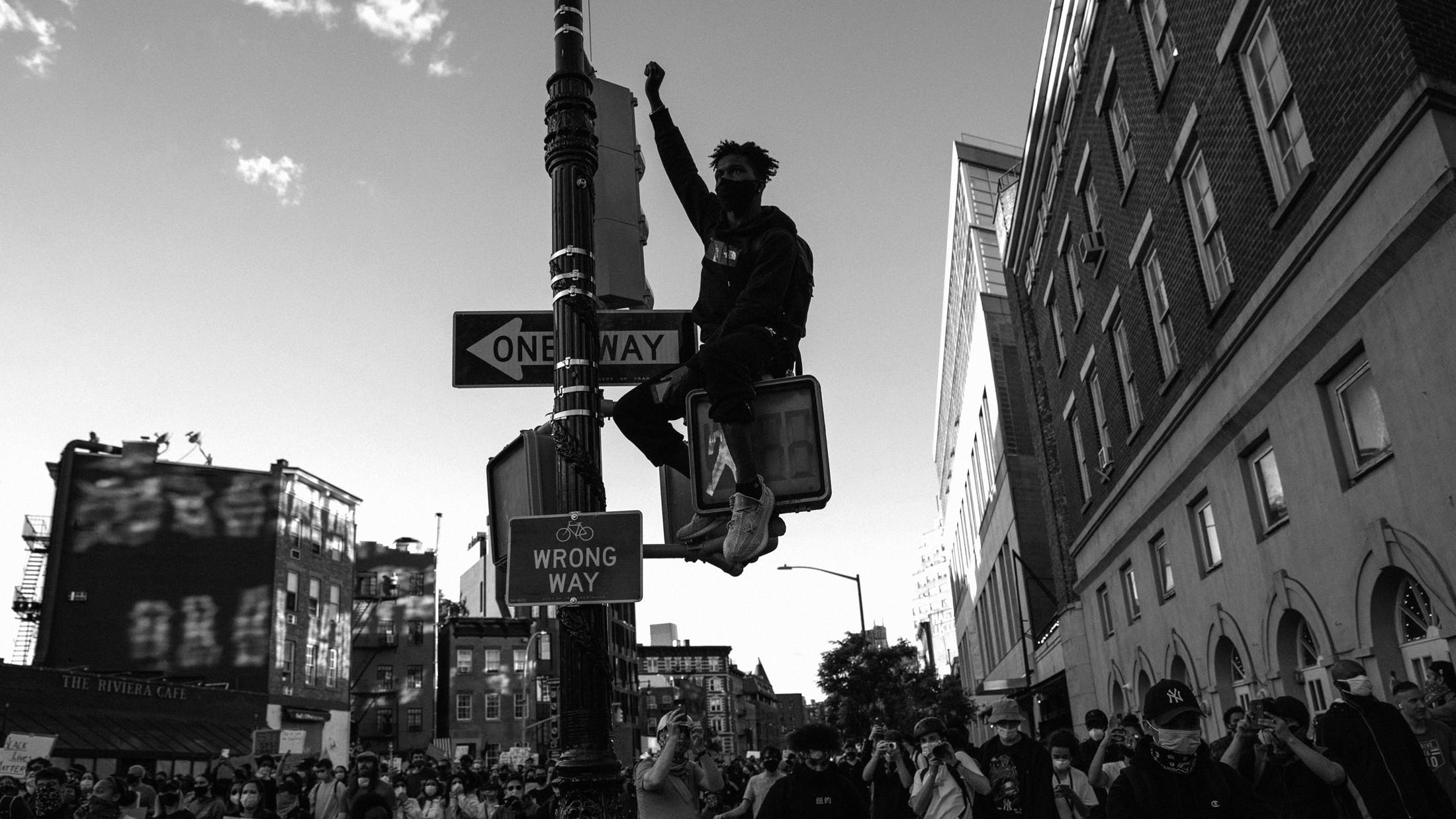 The most important thing for people to understand is that this is what black, brown and people they consider ‘others’ deal with on a daily basis. To understand the frustration and to understand the ‘chaos’ that we’re seeing throughout America, you must first understand what it’s like to fear for your body every day, based on a system that has been constructed in order to maximise the ability for you to lose that body every day. The frustration you are seeing is compounded over generations, and comes on a level of blood trauma that is quite literally inherited through cultures where we fear, have a sense of anxiety, and a sense of hopelessness. It becomes inherent to our very existence. George Floyd is a symbol of a much greater problem. George Floyd is me; George Floyd is my father; my niece; my brother and my best friend. George Floyd is so many people.

I have been out there and you could call it various things: you can call it rioting, you can call it chaos, you can call it looting, and you can call it protesting because it still very much was. But it is a result of the amalgamation, the aggregate product of generations of mistreatment. And here’s the thing: our systems and these structures know this is possible, which is why they train for it. They have riot police and the national guard, and they train for these moments because they know they’re possible – and they’re possible because they create them. We are just speaking a language that we have been taught: chaos. We’re in a system where all they give us is chaos – it is socially engineered. If you can watch that video of brother George Floyd… [and] a man who was so brazen and validated by a system that he showed no fear of consequence, and if you don’t understand why people are afraid, frustrated or why they won’t take anymore, then you are either blind, you have an actual disconnect in your brain, you’re completely ignorant, or you’re racist. That’s it.

The system is not broken; the system is working exactly how it is was created, and this is exactly what it wanted. Once we fucking wake up and understand what it wants to do to us and what it wants to take from us, then we can create an alternative method on how we’re going to live and operate outside of this. I mean, honestly, if you look at it on a fundamental level, the system is not much different to a plantation, and it’s not much different to any structure that has been created to exploit the body, and utilise it in a way where it plunders culture. All we are being given is mistreatment, death and misunderstanding by other people who should be understanding us – this is what is happening right now. We need to understand that we are working in a system that was created in a way to destroy us, and to destroy cultures in a way that breaks them down to such a minimal level that they can be controlled. People might think the system is broken, but we’re actually just giving it more power because was created to do this very thing.

I was out there watching people do what they needed to do to show authority, and to show a society that has forgotten them and their brothers and sisters. I was watching people operate in a way where they finally felt like they have control, and what I saw was a structure of authority looking for help. I saw people breaking into places and spray painting on walls but they couldn’t do anything. They didn’t know what to do because there was so many of us together at once. We were so much more powerful than the police force that they could not do their job.

Let’s make no mistake, their job and the evolution of their job was from slave capture in America – look up ‘runaway slave capture’. The fucking badges that sheriffs wear is a symbol of racism, subjugation and exploitation. The first iteration of the police force was created to keep black and immigrant people out of districts so that real estate did not go down. How can you think that all of a sudden they would forget their racist foundations of exploitation? How could you forget when that is what you were built upon? My brother is a police officer, and this week I’ll be reading a letter to the world written from him. I’m so proud of him, and I’ve got to make that clear, too: I’m not saying that every single police officer is this thing I’m talking about, because I know people who go into the force believing they can create change.

But let’s not forget: they’re authorised to kill, and they’re not authorised to deal with the emotional complexities of human beings, because they themselves are not involved enough emotionally, and they cannot react in a way that is appropriate. They should be acting better, they should be exemplary, they should be showing us how to operate in these times – but instead they are fuelling our fires, they are killing us, and they make it obvious. Derek Chauvin [the police officer charged with George Floyd’s murder] made it so obvious that he had no regard for this black man, and that he knew he would see no consequences, statistically speaking. The reason they apprehended him is probably for his own safety, and then they charge him with third-degree murder. Third-degree murder is not justice and people need to stop accepting justice in piecemeal. Three other officers who were accomplices not being arrested is not enough, and we shouldn’t accept this bullshit thinking we are getting justice. Instead, we need to take to the streets, mobilise, show strength in numbers, and disrupt. And, at this point, I am okay with however we must do it.

What I hope comes out of this is that [those in power] feel such an indelible mark on their economy and on their structure. They’re not worried about us hurting each other, and they’re not worried about us hurting as a culture. Most of the fucking world – full stop – doesn’t care about its citizens hurting each other. They just want your money and your power. I want people to see what happens when you get together, when you mobilise and you attack in one concerted effort, and you fight back and disrupt the order. I want them to see the aftermath and see that even in the rubble we can use it to build new foundations. That’s what I fucking hope comes of this.