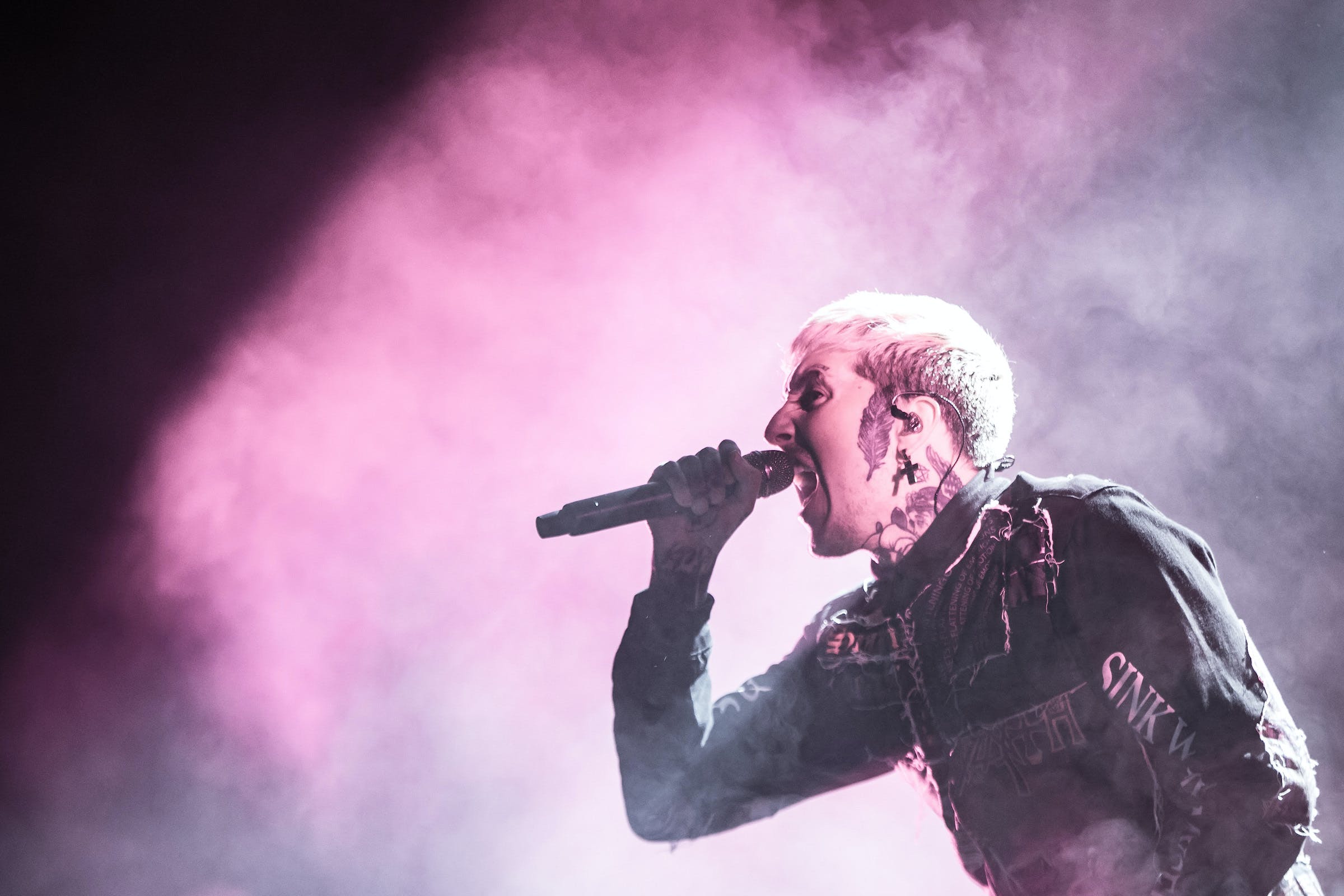 Bring Me The Horizon performed at Hammerstein Ballroom on the coldest day in New York City this year. It was 6 degrees Farenheit outside; earlier that day, an emergency alert went off on all of our phones in Kerrang!’s Brooklyn office in unison to warn us of a white-out and icy roads. Yet fans would bundle up in layers of snow gear and traverse from all over the metropolitan area by subway, foot, train, and car to line up outside of Hammerstein – jumping up and down and blowing into their hands to keep their digits attached to their bodies – for the chance to see the English quintet play the first of two New York City shows in support of their new album, amo.

Across the pond, Bring Me The Horizon are huge. In fact, as of Friday, their new, decidedly pop record amo hit #1 on the UK charts. But in America, while they have an undeniable following (after all, they are big enough to play two consecutive nights at the Hammerstein), they’re not quite arena-level yet. This got me curious: What is it about this band that hasn’t clicked in America yet?

As a rule, I don’t look fondly on the early 2000s, or anything inspired by it. (The two-toned, scene-kid skunk hairstyles were weird, ultra low-rise jeans didn’t look good on anyone, and the melodramatic neo-emo and nu-metal I’d listen to on the radio just made me more of a sullen, miserable teenager than I already was.) So recently, when I heard that Oli Sykes, a man just two years my senior, had initially formed a deathcore act called Bring Me The Horizon because he was struck with inspiration after seeing Linkin Park for the first time as a young teen, I’ll admit my first reaction was to avoid it. Not because I don’t like Linkin Park, mind you – Hybrid Theory defined not only much of my life at age 13, but also much of my musical taste to follow – but because it feels uncomfortable to revisit an era so deeply intertwined with my hormone-charged teenage unhappiness.

But many, many subway rides and walks through Bushwick while blasting amo in my headphones had begun to thaw my 30-year-old heart. The way they’ve managed to forge a new genre out of a wild amalgamation of metalcore, emo, electronica, and hip-hop – with Oli’s deeply personal lyrics driving it all home – is unprecedented, and damn, some of the songs on the record are catchy-as-hell earworms I find myself humming hours later. (It also doesn’t hurt that on this latest effort, they had the eclectic help of Grimes, Rahzel, and Cradle Of Filth’s own Dani Filth.)

When the lights finally went down for Bring Me The Horizon’s first set at Hammerstein, Oli Sykes appeared under a single spotlight onstage, wearing a patchwork jumpsuit. The synthesized organ sounds of i apologise if you feel something, amo’s minimalist intro track, reverberated around the room as his mysterious vocals commanded the crowd into a sing-along right off the bat. I glanced around at the crowd around me – mostly people in their early 20s, snow gear now tied around their waists, singing at the tops of their lungs with adoring looks on their faces. The moment the track moved seamlessly into amo’s upbeat second track, MANTRA, there were crowd-surfers.

As soon as Oli screamed MANTRA’s infectious chorus, 'Before the truth will set you free, it’ll piss you off!' it hit me: Linkin Park’s influence went deeper than I’d previously thought. Between his pained lyrics, his effortless command of the crowd despite his open vulnerability, and the way he crouched down with his elbows out to get the most out of his guttural screams, Oli Sykes had learned the essence of how to be a good frontman from Chester Bennington. And the torch could not have been passed on to a more deserving singer. And in that moment, I remembered what it was like to hear Hybrid Theory for the first time.

Good rock’n’roll should always understand love as well as it understands anger or violence, which is a concept the discographies of both BMTH and Linkin Park display proudly. With the past few years that Oli Sykes has had since BMTH’s last album, 2015’s That’s The Spirit – which consisted of a marriage, a divorce, and another marriage – it’s clear he gets the entire spectrum of emotion that exists between the outermost extremes of heartbreak and passionate love. And even though he doesn’t sing them through clenched teeth the way Chester did, the resemblance and lineage is crystal-clear.

“If you feel me, I need you to jump as high as you can,” Oli yelled to the crowd, mid-song. And not a single soul stood still. If you had shown me a video of that moment – confetti unleashed from the ceiling, an entire room full of bodies moving in unison – and told me this was Linkin Park in 2005, I’d have believed you. And in that moment, I felt nostalgia for a type of music – and an entire era – I didn’t realize I’d missed.

Bring Me The Horizon might have a way to go before their popularity in America reaches the heights of which they’ve worked so hard to achieve in the UK, but if that night in New York taught me anything, it’s that America is not far behind. BMTH are a force to be reckoned with – not for a nostalgic sound they’re bringing back, but for a brand new sound, for the raw, emotional connection they have with their fans, and for a new movement they’ll continue to forge for many years to come.

If that’s the legacy the 2000s have left us, consider this American music journalist fully on board.