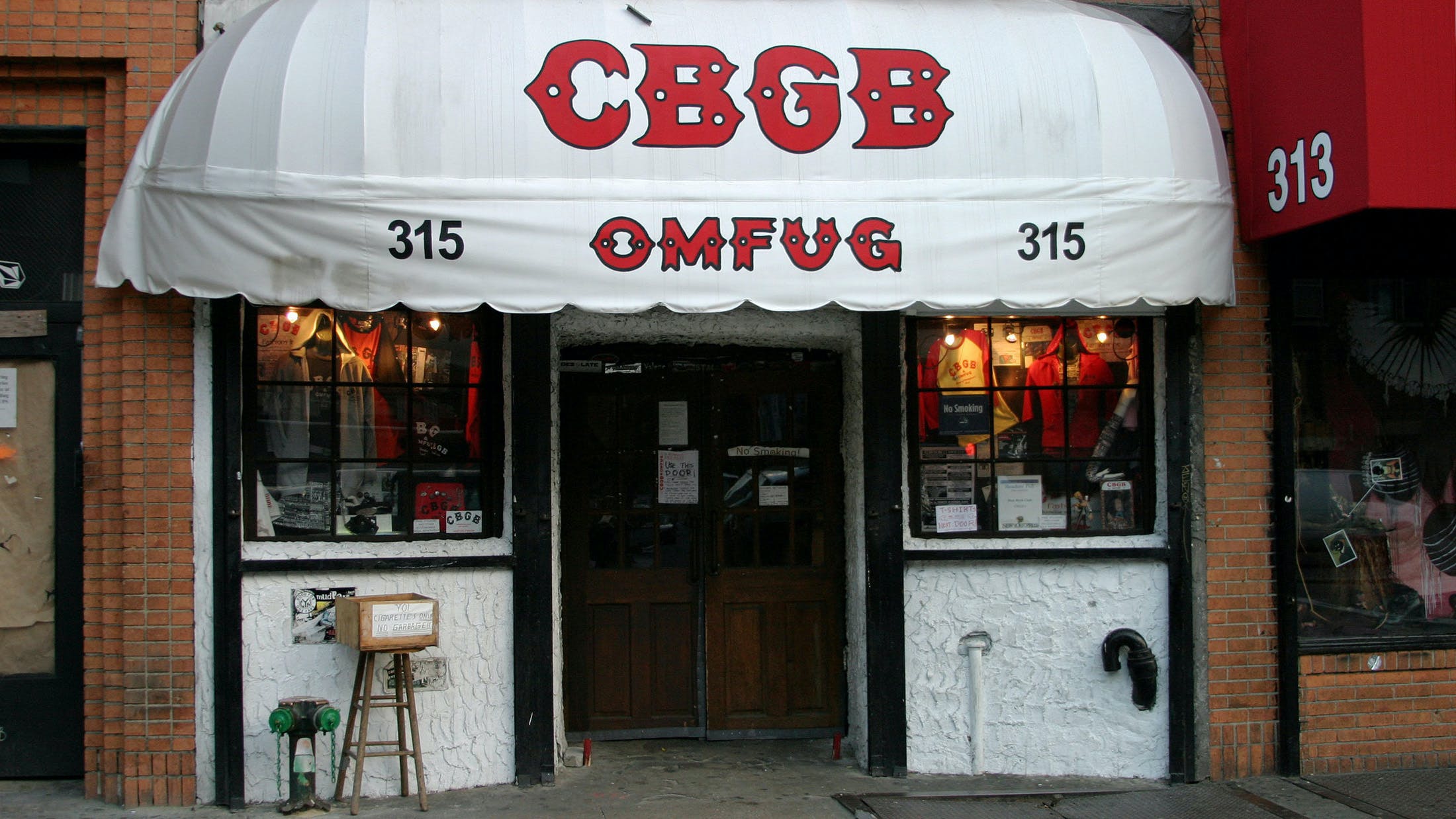 Gilman opened on New Year’s Eve 1986, an all-ages venue banning alcohol, drugs, violence and any form of racial or gender prejudice from its premises. Run without the corporate sponsorship that keeps many music venues afloat, Gilman is instead operated by a collective of its attendees, who pay $2 a year for a say in how the venue is run, and pitch in to help with its upkeep.

“It’s a quintessentially socialist place,” says Cedric Bixler-Zavala of At The Drive-In, who played Gilman in 1998. “We were the opening band – [East Bay punk group] Tilt were the headliners, and drew everyone to the show. But Gilman had this rule where the band who had travelled the farthest to play got paid the most money. So, after the show, everyone who played had a meeting to divide the takings at the door, and we stood up and said, ‘We’re from El Paso, Texas, so we deserve the most money!’ And we got it.”

No matter how far they travel, no-one is going to get rich from working or playing at Gilman. But the defiantly non-profit venue’s place in rock history is guaranteed, thanks to the critical early assistance it gave to bands from the local Bay Area punk scene in the late-‘80s. Some of those bands went on to become multi-platinum global stars: Rancid, Operation Ivy, The Offspring and, of course, Green Day. But without the support of Gilman, which offered them a stage to play on when they were nobodies, well… they might have remained nobodies.

Rock wouldn’t exist without places like Gilman – beloved venues that work hard to support local bands, to build a community of artists and fans, to give young talent space to perform and grow. Think of CBGBs, the run-down Bowery dive that hatched punk in the mid-’70s and gave the world the Ramones, Blondie, Television and many more, before growing New York’s hardcore scene in the ‘80s and ‘90s. Or Madame Wong’s, the Chinese restaurant in downtown Los Angeles with a sideline in hosting early gigs by everyone from punk forebears X to an early incarnation of Guns N’ Roses. Or The Woodstock, a modest rock club in Anaheim, California, which gave stage space to Metallica and Slayer years before their pioneering thrash attack shifted multi-platinum albums and filled stadia. Or Seattle’s The Vogue, where grunge legends-to-be like Nirvana, Alice In Chains and Mudhoney played some of their gnarly early shows. Long before these artists had won the faith of A&R people, management or even fans, they had these venues offering them a place where they could reach for the stars – and possibly fall on their asses – and to find their sound, while building their audience. You don’t get to headline a festival without a dive bar with stinky toilets, a ragged sound system and a proprietor with a heart of gold (or tin) somewhere in your story.

What makes Gilman a rarity is that its doors are still open. Many similar venues have long since closed, victims of encroaching gentrification, urban rezoning, corporate competition and countless other threats. To paraphrase This Is Spinal Tap’s fictional auteur Marty DiBergi, “Don’t look for them – they’re not there anymore.” And if you think it’s crazy that such historic landmarks have disappeared, the problem hasn’t gone away. If anything, it’s worse than ever.

“In 2014, we noticed that venues were closing and new ones weren’t opening,” says Mark Davyd, owner of the Tunbridge Wells Forum, a former public toilet that is now one of the country’s finer live venues. Davyd is also founder of the Music Venue Trust, which aims to protect, secure and improve grassroots music venues in the UK. According to Davyd, when he founded the MVT, 35 per cent of the UK’s venues had closed over the previous 10 years. Between 2007 and 2015, in London alone, the number of smaller music venues tumbled from 136 to 88, with further closures claiming long-standing clubs like the 12 Bar (located in Denmark Street, once the heart of the music business, but now scheduled for brutal redevelopment), Hackney DIY venue Power Lunches (which hosted key gigs by the likes of Rolo Tomassi and White Lung) and Islington’s Buffalo Bar (whose stage was graced by Frank Turner, Part Chimp and Future Of The Left, among many others).

“Our landlords went out of business, so all of their properties were put up for sale,” remembers Buffalo Bar’s former manager and co-owner Michael Urwin, who only discovered their new owners were planning to evict the club from the premises after discovering a notice pinned to their office door giving them three months to vacate the building. The Buffalo Bar swiftly went to work to try to save the club, gathering thousands of signatures on a petition to preserve the venue, and winning the support of their local MP, Emily Thornberry, who brought up the issue of venues closing in the House Of Commons. “The petition was presented to the new landlord’s offices,” adds Michael. “They simply did not respond. Any chance of negotiation was clearly out of the question.” The venue closed for good before New Year’s Day 2015.

The problem is not confined to the UK capital, where skyrocketing rents have proven such a scourge for venues. Bristol’s The Fleece, a legendary 450-capacity room that’s witnessed shows by Queens Of The Stone Age and Muse, has been struggling since its rates were raised by 404 per cent in 2017 and residents of nearby luxury flats began making noise complaints, while gentrification threatens the city’s long-standing Thekla bar. The Bierkeller – where Nirvana played in 1991 – closed in February 2018. It’s a pattern playing out across the UK – beloved grassroots venues like Norwich’s Owl Sanctuary, Edinburgh’s Electric Circus and Leeds’ The Cockpit are already gone, while the likes of Birmingham’s The Flapper or London’s historic 100 Club are facing extinction.

What’s causing this epidemic? “There isn’t one simple reason,” says Mark Davyd. “A lot of people think it’s merely a case of noise complaints, or gentrification. In reality, it’s a combination of 22 differing contributing factors, any three or four of which might apply to each closing venue.”

A common thread uniting many closures, however, is the difficulty of making music venues work as businesses.

“We’ve a good business model here, because we’re also a pub and we have a late licence. We couldn’t survive just being a music venue,” says Stacey Thomas, who owns and runs The Lexington, a 200-capacity venue in London that also serves a wide selection of whiskies and a burger worth killing for. Stacey has form here, having previously run The Buffalo Bar alongside Michael Urwin.

“The music doesn’t pay for live music – beer does. Most of the money on the door goes to the bands and the promoters. And if people aren’t drinking in your venue, it gets closed down, because you can’t afford to pay your rent or your rates, let alone things like sound engineers, lights, fixing your equipment. There should be arts funding to help these venues. Beer isn’t culture, music is. There’s money in arts funding, but live music’s not seen as culturally significant enough to save. Opera houses will get hundreds of thousands in donations to keep opera alive, which is great. But live music is dying, through a lack of funding and bad business models.”

On a grassroots level, live music is essential to the growth and sustainability of our scene long-term. “Festival headliners are getting older every year,” says Mark Davyd. “And we aren’t producing future headliners to replace them, because the places those artists learn the skills to headline festivals and build audiences are closing down. This might shock the music industry, but The Rolling Stones are going to die. Hopefully, not too soon. But the industry needs to start thinking about where the next great band is going to come from.”

Grassroots venues aren’t just delivering bands, either. According to Vez Hoper, who handled PR and marketing at The Cellar, a beloved 150-capacity venue in Oxford that closed its doors in March this year, “Smaller venues are training grounds for the kids who promote these gigs, who do graphic design for the posters, who do sound engineering… Everyone involved in these venues gets some sense of purpose. Anyone could hire this room and put on a gig.”

It’s this DIY spirit, this accessibility – this sense that anyone can get up and take part and have a go – that makes grassroots venues essential. Sure, your local enormodome, sponsored by some corporate alcoholic beverage or mobile phone service provider, is probably doing a roaring trade. But is it in such barns that the true soul of rock’n’roll resides?

“More venues can go down the O2/Carling/Academy corporate route, leading to a homogenous, bland, identikit ‘McGig’ culture,” says Michael Urwin. “But that’s at the expense of innovative, creative, independently run venues that help support new bands and continue the great tradition we have of nurturing subcultures that go on to enrich society as a whole.”

For Mark Davyd, the lesson is to not take the threat facing beloved venues lying down. “Take direct action,” he advises. “Go to one more show a month. Write to your local council and ask what they’re doing to help local venues survive. Write to your MP and tell them how much you love your local venue and that they should protect it. Politicians only do what they think people want. Tell them what you want.

“We’re going to win,” he continues. “I mean it. We’re organised. We’ve got 400 venues in one network and we’re starting to see change. These venues are the backbone of the UK music industry, they are too important to lose and we aren’t going to let that happen. And if I’m wrong, you will find me chained to the door of the 100 Club as they try to bulldoze it.”