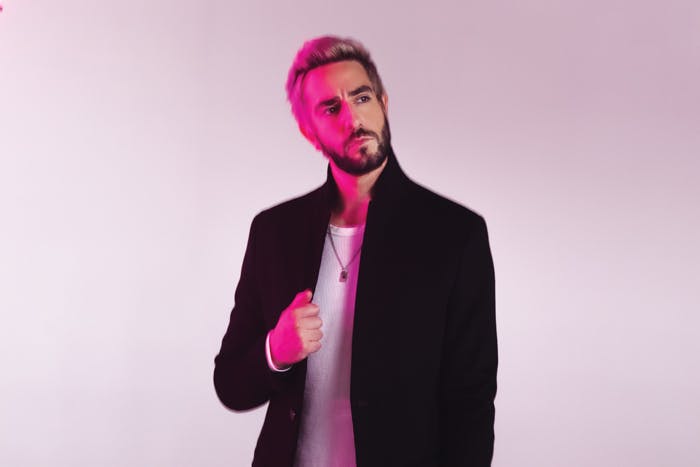 Things are busy in the All Time Low camp at the moment, with the release of It’s Still Nothing Personal: A Ten Year Tribute imminent, but that hasn’t stopped Jack Barakat also powering ahead with his new project WhoHurtYou, who’ve recently dropped a new tune, Not The One. Here, Jack – guitarist for both bands – faces Kerrang!’s 13 Questions, and discusses what’s special about his WhoHurtYou project, as well as creepy crawlies, crazy parents and the countless times he’s stripped off in British bars. Put it away, lad…

When you were a kid, what did you want to be when you grew up?
“It’s pretty stereotypical, but I loved firefighters and police officers. Once a year, the fire trucks would drive through our neighbourhood and we’d be allowed to go on them, which was the coolest thing for me. As a kid, what’s better than that?”

Where’s the best place you’ve ever been?
“New Zealand is one of the most unique places I’ve seen. It doesn’t look like anywhere else, it’s beautiful and you feel like you’re secluded from the rest of the world. You can lose all your worries there.”

What would you like it to say on your gravestone?
“I’m never going to die – I’ll live forever – but just in case I do perish, I’ve always wanted my gravestone to say, ‘He died living.’ I love that – if I go out, I’m going out with a bang. I’m not going to be one of those people who falls asleep and never wakes up.”

What is the funniest rumour you’ve heard about yourself?
“That I’m a dick. I’ve been called a lot of things by people who’ve met me, and there’s been stories of me being drunk, sloppy or weird, but anyone who’s actually spent time with me knows I’m not a bad person, so I always think it’s funny when people say online that they met me and I was a dickhead. I don’t take it to heart anymore, but when I was younger I’d get really offended and be like, ‘But I’m so nice!’”

What is your party trick?
“I can open a beer bottle with anything. I’ll always find something in a room to open a bottle with easily. It’s less of a trick and more a helpful skill, especially when we’re on tour.”

What is your biggest fear?
“I know it’s dumb, but I can’t stand bugs – I just killed one before we started this interview. I had a full two-minute panic of thinking, ‘Where did it come from?!’ The idea of a bug infestation in my house freaks me the fuck out – even seeing cobwebs where I can’t reach them makes me feel stressed, because I know there’s a spider somewhere. Then there’s ants, I can’t stand them – what do they even do?”

What is your worst habit?
“I’m a nose-picker – whoever I get married to is going to have to be okay with that. My mom always calls me out on it, but most people I hang out with are used to it by now. I try not to do it around females, but the person I marry is going to see it a lot.”

What is the worst injury you’ve ever suffered?
“In adulthood I’ve been pretty lucky, but when I was younger I broke my wrist three times, which sucked. As a guitar player, that’s obviously not ideal, but my injury record is, somehow, not that crazy. I guess I’ve been rather fortunate in that regard.”

What is the worst job you’ve ever had?
“When I was a teen, I was an umpire for Little League Baseball, and it was really stressful! The kids didn’t give a shit, but the parents would yell at me so much. I was literally a child and these adults were going psycho at me – it was a weird job. I only got like $10 a game, which made it suck even more. It wasn’t worth it.”

Have you ever been kicked out of a bar?
“Many times, because I like to take my shirt off when I’m drunk and dance on tables – I can’t count the amount of times that’s happened. It’s often been in the UK where I’ve been kicked out – the British don’t mess around when it comes to that!”

If your house was on fire, what one thing would you save?
“My first guitar – it’s a shitty Fender Squier covered in band stickers. Talking about it has actually made me think that I should bring that guitar on tour. It’s definitely the thing I’d want to save, without question.”

If you had the power to turn the internet off, would you do it?
“I think I would. I got to live for 14 years without the internet being a part of my life, and I did alright – life was a lot simpler back then. I’d like to see the world with the internet taken away, because I think I’d be fine without it, and I’d be interested to know how society at large would react. If we’re being honest, the internet is a bit exhausting.”

Why should people check out your new band, WhoHurtYou?
“Because we’ve been putting out some tracks that are really personal to me, and it’s a chance for people to hear music that’s, lyrically, been written from my perspective. This is the first time I’ve been so heavily involved in every aspect of a band, and it’s been great to express myself like that. This band has a special place in my heart, and I’m hoping people will connect with these songs in the same way I have.”

WhoHurtYou's Stages EP is out now via Parlophone. All Time Low's It's Still Nothing Personal is out on November 8 through Fueled By Ramen.