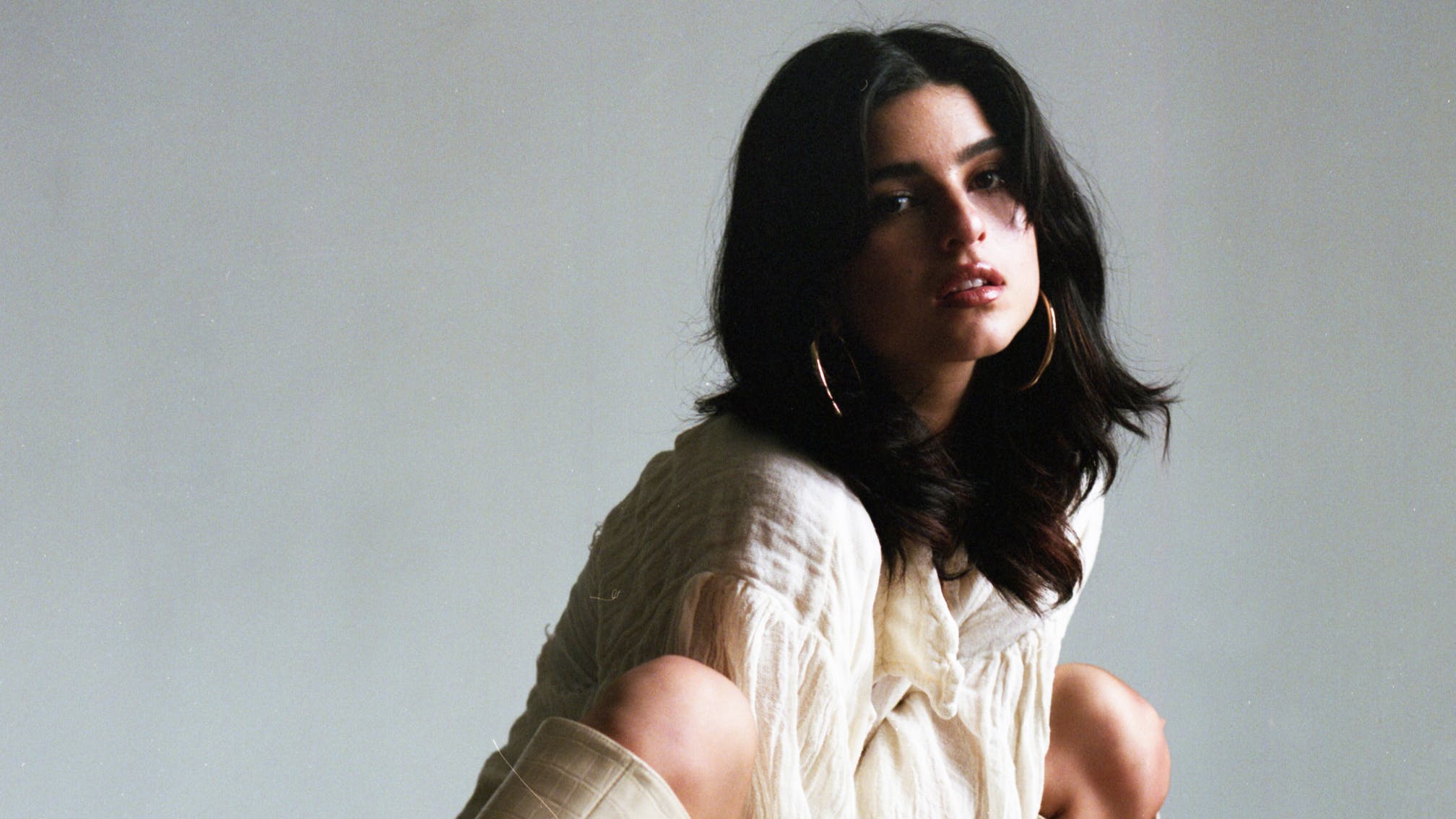 There’s a lot going on in the world of renforshort right now. It’s early afternoon and the singer-songwriter has – as of mere minutes ago – just announced her first-ever headline tour. “It’s so scary, but exciting,” ren enthuses. “It’s U.S., Canada, UK, Europe, Australia – the whole shebang…”

It’s no surprise that she’s gearing up for a long-haul jaunt. With a list of pop-rock hits glued to her name, renforshort is taking over big time. Pulling inspiration from the likes of Bon Iver, Nirvana and Amy Winehouse, and working with emo-rock stars such as blink-182’s Travis Barker and Linkin Park’s Mike Shinoda, the 20-year-old is already on to something special.

Paving a name for herself with her well-penned early EPs teenage angst and off saint dominique, renforshort has been gearing up for a strong-selling debut record, and that’s exactly what she’s pulled off. The release in question – dear amelia – is an inventive 12-track album weaving through a meld of hyperpop beats, punk drums and ethereal guitar riffs.

And her stage presence began even earlier than her professional career. As an early teen, renforshort was drawn to creative fan clubs, musical theatre and open mic nights, on top of growing up in a musical household. Moulded by what was around her, renforshot still holds onto the artists (Pink Floyd, Janis Joplin, Stevie Nicks) that left their mark on her sound: “Some of them were found played around me by my parents, but I discovered some on my own and that's a whole other thing. Finding these artists on your own, and your first artists, stay with you.”

Here, in the latest instalment of our weekly Who the hell is? series, we sit down with ren to hear more about her fast-paced breakthrough, working with Travis Barker, and the awaited tell-all on dear amelia…

How did you establish your distinctive style of storytelling and alt.pop?
“I've always loved writing, and when it comes to music it's just easier for me. It gives me a space to be totally honest and open. For me, I take a lot of inspiration from what I grew up listening to. It was Nirvana, Smashing Pumpkins and Radiohead. All of that was what my favourite music is pulling inspiration from, and that’s why my music is so guitar-forward, because I really liked that aspect of music. I like that in my music, so I try to incorporate that. I just make music and hope it sounds good.”

Your new album dear amelia candidly digs into subjects of self-erasure, depression and anxiety. How do you navigate your boundaries on what you will or won’t write about?
“I like to make it as vague as possible so that it's as open to interpretation as possible, because people aren't relating to unique experiences. Having something so open for interpretation is really helpful. With any form of media, it's subjective. If you look at a piece of art, you feel the way you want to feel about it and you get what you want to get from it. Besides the artist's intention, you get your own feeling from it. I have my intentions while I write my music. There's a lot of ambiguity so people can place their own personal experiences in my songs.”

At the same time, it’s also an up-close portrait of your experiences at a young age. How did that concept come about?
“I wrote a song called amelia, which is the closing song on the album, and it was one of those songs that feels like more than a song. To me, it feels like it is a story and I feel like it can be used in a bigger way than just being a song. So, I made amelia, this character, and the album's basically letters to amelia and conversations with amelia. It came super-naturally to title it dear amelia, because every song is written to her.”

It sounds like amelia is a version of yourself…
“I explain amelia as the personification of the part of my brain that I put so much stress on. It's when you don't get help for yourself or find help, you end up putting a lot on yourself. She's that part of my brain that's so stressed out all the time.”

By the end of the record, your relationship with amelia has really gone through the wringer, hasn’t it?
“At the end of the album, you lose amelia and the album progresses from, ‘I’m alright, this is my love story’ to, ‘I have no idea who I am and I don't know what life is anymore!’ It evolves with this stress that you put on this character, which is yourself.”

Do you remember which song you wrote first?
“The first song that I wrote for the album is Julian king of Manhattan. I wrote that with a few of my friends and I was really, really, in my Strokes era! I was like, ‘I don't know what the song means, but I want to write a song for Julian Casablancas.’ So we did it, and I love it so much. It was a one-off [though], the album was basically built around amelia.”

Your online fans have reclaimed some of your more personal songs in a light-hearted way. Do you keep up with those moments?
“I love that. I think it's funny. I don't think everything has to be so serious. When I perform [the song i drive me mad], I just want everyone to scream their heart out, jump or do whatever they want, because right now, we're getting everything off our chest. It's kind of a big ‘screw you’ to anxiety and being held down by your brain that’s sabotaging you, in a way. I think it's fun and I love it. Knowing that people can listen to my music and relate to it, for me, I didn't have that growing up and that's what I wanted to do with my platform. I'm always gonna support my fans – they're the best, and whatever I put out we'll find a way to vibe to it.”

Moments with fans and the music are important…
“I like to inspire unity in a way, in small ways, like as I was saying before with i drive me mad. I asked everyone to do something as a group and bond by yelling, screaming and jumping together or hugging the person next to you. Just doing all these little things that can change people's days. Make them a little happier, getting a hug, you know?”

Do you have any particular favourites on the album?
“Julian, Amelia, Not my friends. I miss myself and i thot you were cool – that's a lot, but those are my favourites!”

You collaborated with Travis Barker for dear amelia. What can you tell us about that crossover?
“My friend Alden had this idea for a song and he sent it to me. I was in a session with Travis and making another song and Jeff Hays, the producer that I worked with, was like, ‘Travis, do you mind putting live drums on here because it needs it? It's not Renified yet!’ So we did and it sounded way more like me.”

Another surprising collab was your song let you down with Jake Bugg. Whose idea was it to bring him on board?
“Jake Bugg is one of my favourite artists of all time! I wrote that song and I was like, ‘Guys, let's not write the second verse – we're saving it for Jake Bugg.’ Everyone was like, ‘Stop saying that; we're writing the second verse, we're finishing the song!’ I told my manager that I wanted Jake Bugg on it. Months go by, I don't think of it, and then I get an update on the song. I played it, and Jake Bugg started singing and I bawled my eyes out. I couldn't feel my legs for the whole day. I called all my friends. Everyone knows how much I love him. Manifesting works!”

Ultimately, how does dear amelia represent who you are?
“Oh my gosh. It’s been my life for the past two years. It's all I've thought about. It's all I've worked on. It's really just everything for me. All my attention has been focused towards this project. Literally, I wake up, I think about it. I go to sleep thinking about it. It's such a representation of my life and how the last year has gone. I'm very excited for people to hear it. Hopefully, they find things they can resonate with and it can help in that way.”

dear amelia is out now via Interscope Records