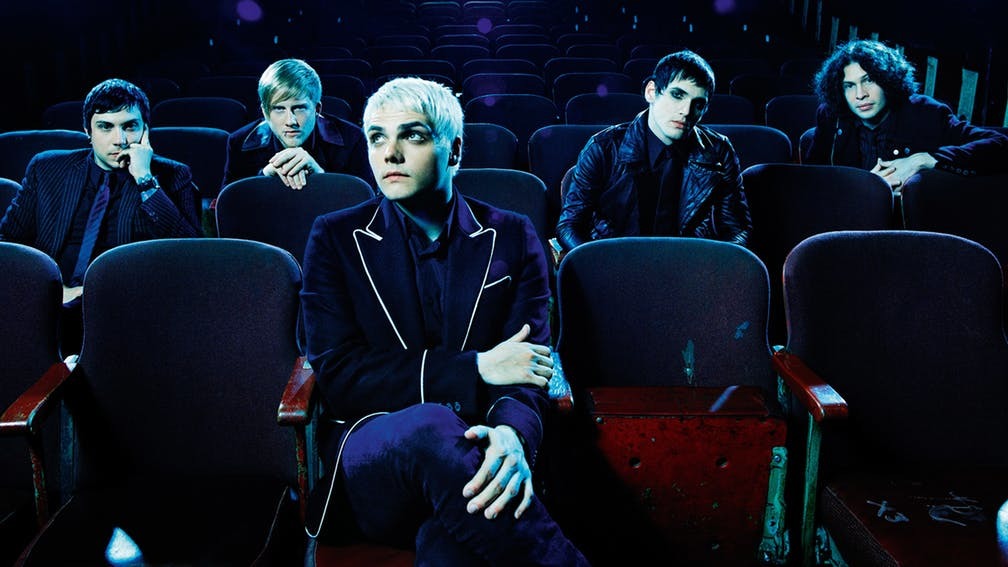 It’s the reunion that many thought would never happen, but rock fans the world over couldn’t be more excited at the news of My Chemical Romance’s return. The swathes of MCRmy members that exist across the globe have missed the band dearly since their 2013 split, and it feels incredible to know that on Friday December 20 at the Shrine Expo Hall in Los Angeles, Gerard Way, Mikey Way, Ray Toro and Frank Iero will be together onstage once more, playing some of the most vital rock songs of the 21st century.

Only last week, Three Cheers For Sweet Revenge and The Black Parade were featured in Kerrang!’s piece on the greatest emo albums of all time – the latter of which was voted as the number one by you, the K! readers – but little did we know that days later we’d be learning of the band’s imminent return. It feels like this news has come out of nowhere, and that’s exactly why now is the right time for My Chemical Romance to make their comeback. They’ve never been a band to do the expected; whether it was ditching the darkness of The Black Parade for the day-glo of Danger Days or the abrupt manner in which they announced their split, MCR have always surprised us, and while at times they may frustrate their rabid following, deep down, the MCRmy wouldn’t have it any other way.

READ THIS: How Three Cheers For Sweet Revenge made My Chemical Romance superstars

My Chemical Romance left a gaping hole in the rock world when they split six years ago. The death of the band effectively killed off the emo scene they’d spearheaded, and although the strongest of their contemporaries – Fall Out Boy, Panic! At The Disco, Paramore – successfully blossomed into mainstream-bothering and multi-faceted musical acts, many others fell by the wayside. Emo – particularly the dramatic, conceptual, high-art take on the genre that MCR dealt in – largely dropped-off the radar of casual rock fans, but in the past couple of years, the foundations of a new wave of emotional and visionary young rock artists in the guise of My Chem have been laid down.

Creeper, YUNGBLUD, Holding Absence and Palaye Royale have all broken through in recent years, and while, sonically, they’re very different artists, they each have, in their music, their vision and their attitude, more than a little of the MCR about them. twenty one pilots, another cult band with genuine depth and a penchant for world-building, have exploded and become a global name. With the seeds of the next generation of daring musicians well and truly sown, it’s fitting that the greatest example of such sonic innovation have now returned to lead the charge. Whether or not we’ll get any new music from My Chemical Romance (and what exactly that might sound like) remains to be seen, but just having the New Jersey legends back onstage and in the spotlight again is a kick up the arse to the rest of the rock world.

When you think about the storyline of the band’s final album-proper, 2010’s criminally underrated Danger Days: The True Lives Of The Fabulous Killjoys, you’d be forgiven for speculating that MCR had this planned all along. The LP’s narrative arc, if you’re not aware, goes a little like this: it’s 2019, the world’s gone to shit and authoritarian populism rules; then, out of the shadows, a group of rebels on the fringes of society emerge, and powered by a message of hope and a punk rock attitude, take a nail bomb to the whole fucking thing. To claim they actually predicted how the world was going to progress is a stretch, sure, but such parallels demonstrate how My Chemical Romance have always been looking forward, anticipating what those around them are about to do and staying ahead of the curve. To have them back, in whatever guise and for however long, feels amazing.

Rock music has needed a band like MCR ever since they left us, and despite their influence being plainly felt, no-one has quite stepped up to fill that void. Now, with Gerard, Mikey, Ray and Frank back together, they don’t have to. My Chemical Romance’s return is bold, exciting and has the potential to be game-changing. It’s a shot of adrenaline that’ll breathe new life into a rock scene that’s been reeling from their loss.

Kelly's done Welcome To The Black Parade as part of her Kellyoake series on her TV show, and it slaps…

My Chemical Romance mark 15 years of The Black Parade: "So much has changed, too much has stayed the same"

"And still, they’ll never take my heart…" My Chemical Romance have marked the 15-year anniversary of The Black Parade.