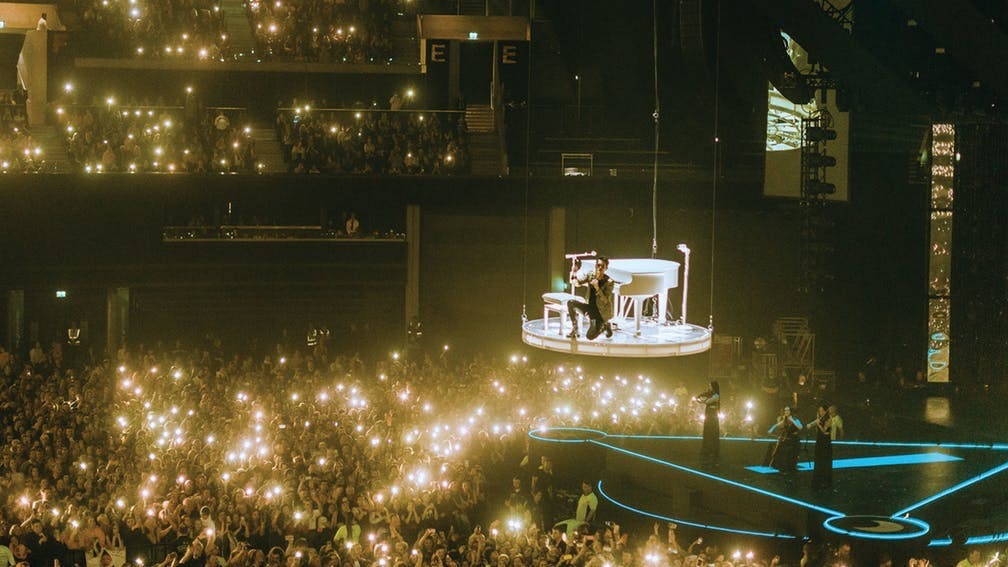 Good news for fans of turn-of-the-century pop music: Jennifer Lopez and Shakira have been confirmed for the Super Bowl halftime show next year. And while we’re down with the two biggest names in pop, there’s an even better choice staring Super Bowl’s head honchos right in the face.

By the time the biggest game of the year comes around, it’ll have been 10 whole years since a rock band last headlined – and even that was The Who. Legendary, sure, but the contemporary scene needs its moment in the spotlight.

Recently, the halftime show has become more about the spectacle than a typical performance (remember Left Shark?), and we’ve got the perfect remedy to live up to those high hopes without becoming a nostalgia trip. The likes of Green Day and Foo Fighters are in with a shout - and they have the clout to pull it off - but there’s one band that stand out from the crowd.

Let’s give Panic! At The Disco the spotlight they - and all of us - truly deserve.

Brendon Urie and Panic! At The Disco have hit new heights as a live act over the past few years, with few bands able to hold a candle to his engaging, exciting and energetic performance. He oozes charisma, hits notes most singers can only dream of, and manages to enhance the stage show without being overshadowed by it.

It’s almost like Panic! At The Disco are made for the Super Bowl. Brendon has become a master of live music over the years, with the group’s festival slots at Reading and Leeds last year showing just how far they have come; packing pyrotechnics, huge platforms, LED screens and more. The only thing able to outshine this display is Brendon himself, and on a night made for special moments like the Super Bowl, a Bohemian Rhapsody cover here or a Fever You Can’t Sweat Out medley there would do nicely.

The halftime show is about more than flashing lights and stadium-sized vocal ranges though - everyone demands just a little bit more. Even the likes of Beyoncé and Bruno Mars don’t come alone, and Panic! would be no different. Enter Taylor Swift. An artist who’ll no doubt have her own moment centre stage soon, but she’ll also be a surefire way to make this set go fully mainstream. She made waves with Brendon when he guested on her mega hit ME! this summer, and a surprise appearance writes itself.

It’s also just the right time for this to happen. The Tay Tay collab comes as Panic! At The Disco are riding the wave as one of the biggest bands in the world right now, with 2018’s High Hopes taking it all to the next level. In January, it surpassed I Write Sins Not Tragedies with more than 289 million streams.

This is, of course, Brendon’s rock world, and we’re just living in it, which brings us onto one potential pitfall… with a very obvious solution.

For a long time now, Panic! At The Disco has essentially been a solo project with Brendon wearing all the hats as a conveyor belt of musicians step into the fold for the live shows. There’s nothing wrong with that, but given how this would be the pinnacle of a life’s work, it would be nice to see him alongside some dear friends sharing the moment.

There’s always a chance of getting Ryan Ross back for one more round, but to add to the Super Bowl shimmer, Fall Out Boy should be the ones backing their pal Brendon.

The bond between the two bands is nothing new (we all remember Brendon’s drunk history of FOB video, right?), so the stars could align for a defining moment worthy of the grand stage. Both projects have been linked since the moment Panic! At The Disco's A Fever You Can’t Sweat Out was released on Pete Wentz’s Fueled By Ramen imprint Decaydance 14 years ago, and it would only be fitting that the lads join Urie for such a special occasion.

Let’s be honest, it basically feels like destiny that these groups should join forces. They’ve performed on each other’s songs and been figureheads of the scene for so many years. It would be a culmination of a wonderful journey – and there really are no other better representatives for our corner of the music world.

Panic! At The Disco x Fall Out Boy also opens the door to a wealth of mash-up opportunities: Time To Dance, Dance? Check. My Songs Know What You Did At Nine In The Afternoon? Count us in. I Write Sins Not Centuries? You get the idea – ideas on a postcard, please.

We know the chances of deep cuts and classic tracks receiving a full airing in a relatively short time is pretty low, but after Maroon 5 took fans down memory lane last year, maybe Panic! At The Disco could go a similar route and blast out a Pretty. Odd. medley? We’d tune in for that alone.

Sadly, the ship has sailed for 2020 with J-Lo and Shakira stepping up, but fingers crossed the NFL doesn’t pass up on one of the world’s most unpredictable, influential and boundary-breaking bands for Super Bowl 55. It’ll be better than The Who.