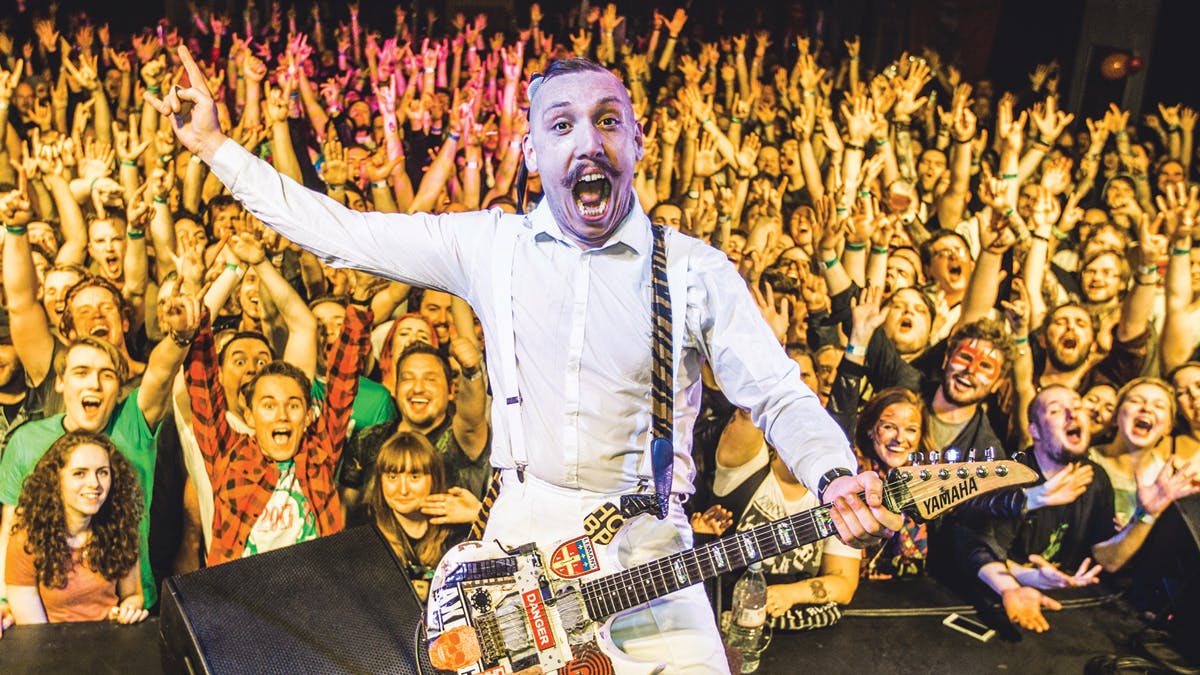 This week, legendary London venue The 100 Club announced that they would no longer be posting set times ahead of a show, in an attempt to encourage more gig-goers to get into the venue early and watch support bands.

The move has sparked much debate online, with the venue even having to re-address their decision: "We didn’t expect such a reaction to the statement made about no longer announcing stage times," they said. "Though there’s been a lot of support for it, it’s made other people feel angry and concerned. The sole intention was to support the supports. Nothing else. Middle ground will be sought."

We had a very similar discussion with the brilliant Jamie Lenman recently, who feels passionately about fans of a gig's headliners making the effort to come out and watch support bands, too. Here's what the musician had to say about it…

Have your feelings towards respecting support bands come from personal experience, Jamie?

"When I put on a show – like a tour or something like that – I always try to make it the best show that the audience could come see, and that includes the support acts. A rock show is the whole evening, not just the main act, so I want it all to be top-drawer and for the bands to fit together and make a neat package. Even if someone came to one of my shows and left feeling like they were more excited about one of the support acts than whatever I was doing, I’d still feel like that was a big success because they’ve still had a great night, and maybe discovered some new music to boot. Me and the support acts, or me and the main act if I’m supporting, are all in the same boat: we just wanna make some great noise together."

Why do you think that people don’t tend to bother turning up to see support bands so much anymore?

"It’s easy to understand. People don’t generally go to see a show specifically for the support act, unless that act is hard to see otherwise – like, maybe they’re from another country or whatever. But usually you go for the main band, and you don’t really look at who the support acts are. Maybe people wanna go out for a nice meal first, or maybe they can’t get away from home or work in time and that’s all fair enough, but you might be missing out on something really special.

"Another thing people tend to do nowadays is vet the support acts on SoundCloud or whatever, have a listen and see if they wanna catch ’em at the start of the night. At least those people are taking an interest, but I never do this because I want to be surprised at the shows. Also it’s hard to tell what a band will feel like live from some online demo. It's not really very fair.

"I couldn’t say if people turn up later specifically in London or not – it’s a city that never sleeps, so things tend to happen later anyway. Plus, in London you’re spoiled for choice! There’s hundreds of shows every night and new bands coming from all directions, so maybe it’s easy to get complacent. In Europe it’s very different: the crowds there love you even before you’ve taken to the stage. When my old band Reuben went out with Billy Talent in 2006, we’d never played outside the UK before, but the deafening roar that went up as we walked on as the first band will stay with me forever. They had no idea what to expect, but they were just so excited for whatever was going to happen, and they trusted Billy Talent to have brought something awesome with them. I hope we lived up to it."

What’s the worst experience you’ve had or seen for a support band?

"I’ve seen some awful things happen to support bands, like sound-checking in front an audience because the main band took too long doing theirs. That’s pretty soul-destroying to watch and to do, and it happened to me a couple times. The worst thing that ever happened to me was when Sum 41 took my old band on tour – we were a bad match, to be fair, but to an extent I think that was up to them to think about it in the same way that I think about what will make sense at my shows. When I take bands on tour I make sure to say to people, ‘Look, I really dig this band and I’m sure you will too, I’ve picked them because I think they’re worth your time and I’d really appreciate it if you came early to see them.’ Sum 41 didn’t do that for us, and maybe they were too busy but it meant that their audience knew they weren’t invested in us and therefore neither were they. They absolutely hated us, and they gave us hell every night.

"I remember one show in Birmingham was so bad that the crowd were literally chanting, ‘SHIT, SHIT, SHIT!’ at us and eventually I told them: ‘For every time you shout the word shit, we’re gonna add a song to our set.’ They shut up pretty fucking quickly after that!"