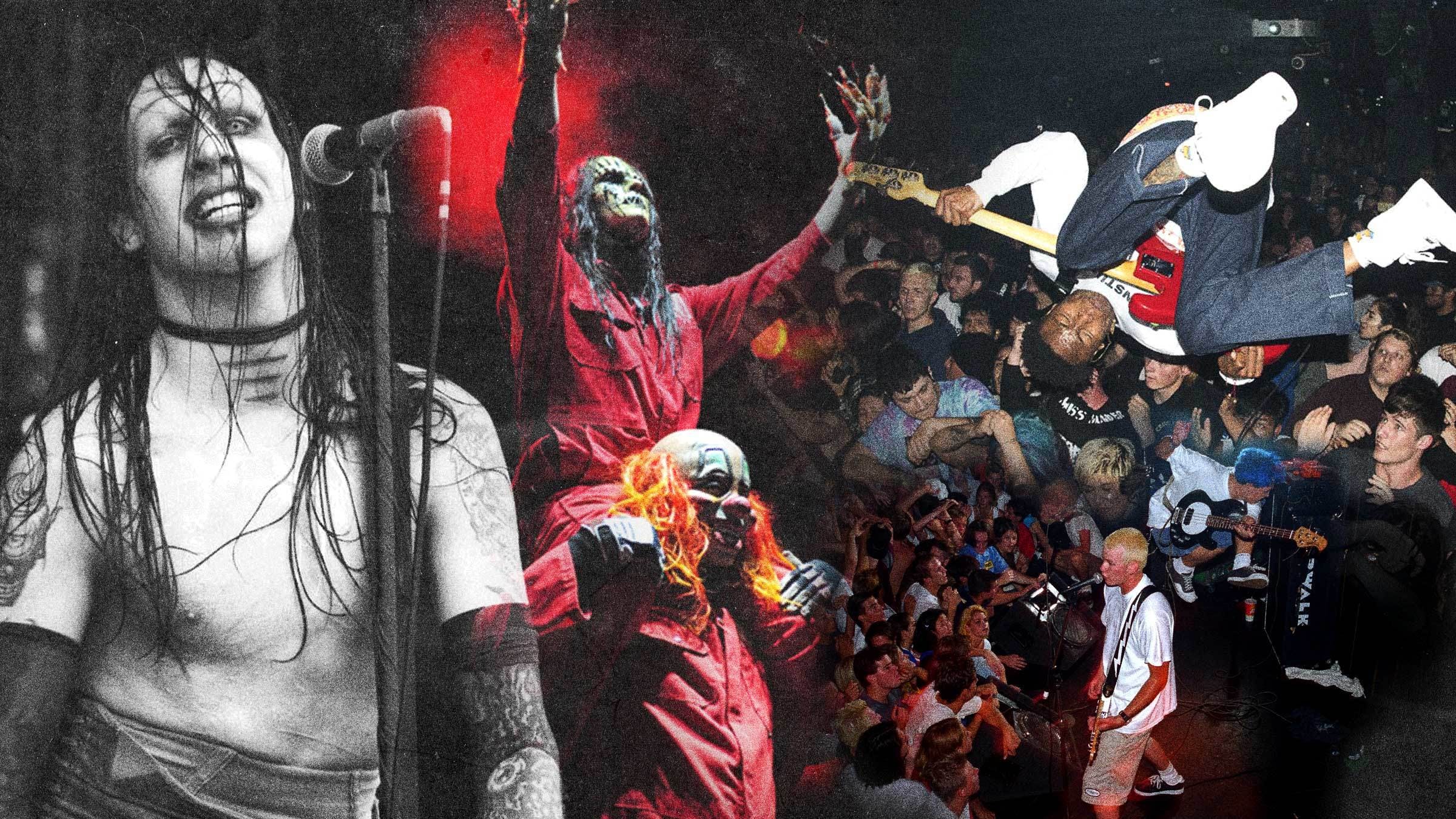 A band’s popularity doesn’t usually happen overnight, but sometimes it does. A great set at just the right moment, in front of just the right people, can make a band legendary. Or at the very least give a tangible record of how much their music is resonating with fans. Sometimes that comes in the form of festival domination or a momentous homecoming show. Other times it can happen because of an insane stage antic that makes the news.

Here are 10 concerts that absolutely made a band’s career. From Warped Tour renegades to metal festival masters, each of these shows either took a band to the next level or provided proof that they had just arrived.

In its heyday, Ozzfest was a rite of passage into the upper echelon of metal. Landing a slot on the Ozzy Osbourne-curated tour was like being baptized by the holiest of hell-raisers, and Slipknot received that treatment in 1999. The band began the tour a month before their soon-to-be iconic self-titled debut even dropped, and by the end of the two-month run they were the most notorious band in the genre.

Their show in Ankeny, IA in 1999 took place a week after their reign on Ozzfest ended, and the absolute torrent of screaming Maggots they drew solidified their standing at the genre’s forefront. Their record dropping while they were on Ozzfest was a perfect storm, and that show in IA was a peek into the eye of the hurricane.

Warped Tour 2005 is when Fall Out Boy became the headliners they are today. The band started the summer on a mid-size stage, but as From Under The Cork Tree climbed to Number One on MTV’s TRL, the tour bumped them to the main stage – which still wasn’t enough to contain their rabid fanbase. At the Detroit stop of the tour, which you can see video of here, the band literally had to stop playing in the middle of their set because the gargantuan crowd was getting too rowdy. One could say that Fall Out Boy were… more than they bargained for.

Any of the stops on Marilyn Manson’s Dead To The World Tour could be considered a historical marker for his career. The two-year international run in support of his breakout record Antichrist Superstar remains one of the most controversial metal tours of all time, as virtually every single date was met with protestors.

Manson responded with utter mayhem, continuing his routine of tearing bibles, using stage props that compared nazis to preachers, and, as captured on video at Germany’s 1997 Bizarre Festival, slicing himself open onstage. This was the golden era of Manson as a provocateur, and this show exhibited what he could get away with doing in front of arenas throughout the world.

For everyone who witnessed it, Green Day’s insane set at Woodstock ’94 was poetically emblematic of their seismic blast to punk rock. The trio played to thousands of muddy ruffians hurling enormous hunks of dirt onto the stage as rain poured down during the disastrous 25th anniversary of the original Woodstock.

During their legendary performance of When I Come Around, which was hitting its stride on the charts that summer, Billie Joe Armstrong remains hilariously unfazed when a massive mud pie lands on his guitar mid-song, as he gazes out at people covered head-to-toe in muck sliding down earthy slip'n'slides. It was another instance of a band playing a huge festival in tandem with their album exploding on radio, and the show is the closest thing we have to the single moment when punk broke.

With the guarantee that tireless videographer hate5six will be there to document, a great set at This Is Hardcore means more than just 20 minutes of dominance. If you get a few hundred people going at the lauded annual hardcore festival in Philly, then you can show the world that your set is the wildest in the game.

That’s what Vein did at their 2018 This Is Hardcore appearance, which went down about a month after their acclaimed debut Errorzone was released, and they were the band on everyone’s tongues. As you can see in the above video, fans went the fuck off for Boston bruisers, leaving no doubt in people’s minds that Vein were the next big thing in beatdown.

Read this: The 21 hottest live bands on earth right now

In 2002, The Dillinger Escape Plan were big enough to bring their mind-melting mathcore to the enormous Reading Festival. The band were known in their own circles for breaking instruments, lighting drums on fire, and head-walking on crowds, and they wanted to make a statement at their grand festival appearance. As frontman Greg Puciato has recalled in numerous interviews over the years, he purposefully pounded cans of tuna and protein bars before his set so that he was able to take a dump in a bag onstage and then fling it into the crowd.

The incident isn’t available on YouTube, but the Jumbotrons at Reading captured his stunt and let everyone in that arena know what was happening. It ended up almost getting them banned from the UK for public indecency, which of course only helped their career as metal’s premiere mischief-makers.

In 1990, Pantera transitioned failed glam-metal prospects to groove metal pioneers, taking the virtuosity and heaviness of thrash and slowing it down to what would become their signature, Southern boil. Cowboys From Hell would be their breakout album that made them the legends they are today, and their name got an international boost when they were asked to play the 1991 Monsters of Rock festival in Moscow alongside AC/DC, Metallica, and Mötley Crüe.

Pantera played the crushing cuts off of Cowboys From Hell in front of half-a-million people, and you can hear the cheers nearly drowning out the music in videos of the historic day. Their performance of a song called Domination sums it up nicely.

It wasn’t as common for metal bands to make the news for their antics in the 2010s as it was in decades past, but the Swedish black metal band Watain managed to make it happen. At a 2014 show at the Brooklyn Bazaar, the infamously satanic band doused the crowd in what was allegedly pig blood during one of their many onstage rituals.

The incident ended up getting picked up by TMZ after reports emerged of concert-goers puking and crying from being doused with the animal innards. This is the exact sort of attention a group of over-the-top satan worshippers wants, and it made Watain the act to beat for bands who were looking to make a splash (no pun intended) at their shows.

Read this: Vegan Cro-Mag John Joseph to animal blood-covered Watain: "Don't fucking sit next to me"

You can’t talk about legendary This Is Hardcore performances without mentioning Turnstile. With just two EPs to their name, the Baltimore crew absolutely owned their 2014 appearance at the festival, getting an entire room to joyously chant the hook, 'wasting my time', during their discographical standout Keep It Moving.

You’d be hard pressed to find a video on YouTube with more stage-diving than this set, not to mention a band that’s as involved with the crowd as they are. At one point bassist Franz Lyons ditches his bass to flip into the pack of shouting devotees, and vocalist Brendan Yates spends more time jumping, swinging, and doling out mic-grabs than any other vocalist in the game. This set created the rulebook for how to behave at a Turnstile show.

There wasn’t one singular moment when blink-182 became the next biggest band in pop-punk, but 1997 was the year it happened. As their now-famous breakout Dude Ranch made its way up the ranks of rock radio, particularly its lead single Dammit, blink-182’s crowds gradually got bigger and more invested. Video of their Warped Tour appearances from early in the summer captures crowds who are mostly standing still, either uninterested or unaware of what they were witnessing before them.

But as footage from their show in LA just a few months later demonstrates, people were beginning to scream apropos of nothing in between songs—a solid metric for determining how beloved a band is. At that point Dammit was a bona fide hit, and the reactions they got from teen fans became the new norm. Yes, Mark, this is growing up.