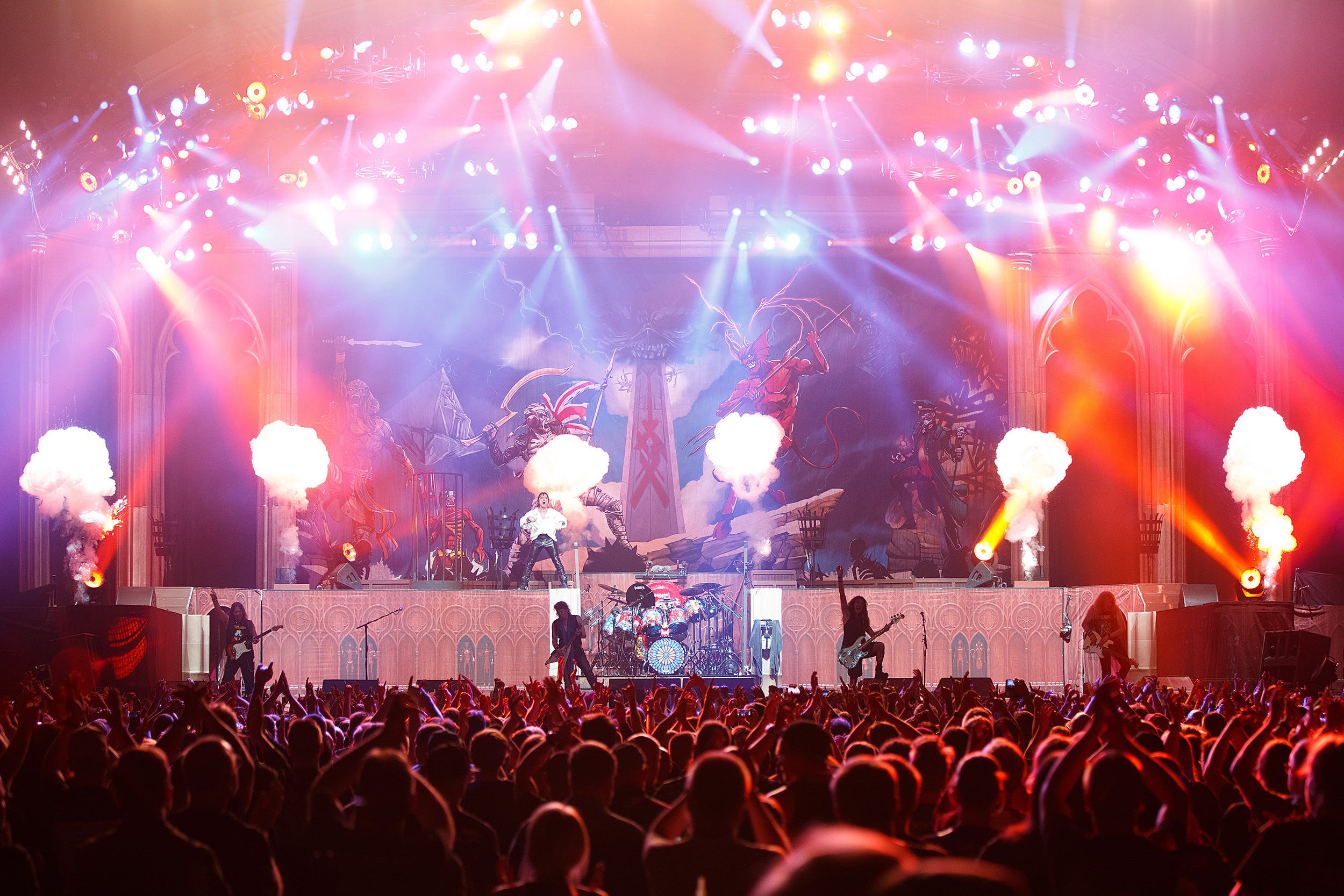 Iron Maiden have kicked off their latest tour in Scandinavia this week. The 35-date Legacy Of The Beast tour – the concept of which is inspired by the band’s mobile game and comic book of the same name – will hit the UK on July 31 and features their most ambitious stage production to date.

Kerrang! caught the band at Helsinki's Hartwall Arena on May 28 and learned a lot during their explosive two-hour set…

1. THERE’S HIGH DRAMA FROM THE OFF!
Iron Maiden’s set is a sheer spectacle from the very moment they bound on stage to opener Aces High. A 33’ wide Spitfire replica, complete with a propeller and flashing lights, swoops over the band and strafes the fans at the lip of stage. At the song’s climax, the aircraft dives behind the wall of amps and crashes to the ground. Sure, you could save a jaw-dropping moment like this for the end of the show, but Iron Maiden tend to do things a little differently.

2. THE SET LIST IS IMPECCABLE
As the tour name suggests, The Legacy Of The Beast features a carefully-curated historic set list, cherry-picking highlights from their 38-year recording career and offers something of a thematic thread throughout the show. The first third of the show has a military flavour, complete with stagehands dressed in combat fatigues, who occasionally appear to remove parts of the stage dressing. The one-two of Aces High and Where Eagles Dare – a tale of daring parachute raid to rescue U.S. soldiers from a German army base in the Bavarian mountains – is followed by 2 Minutes To Midnight (nuclear war), The Clansman (“a song about someone who wasn’t free and decided to do something about it,” remarks frontman Bruce Dickinson) and The Trooper (a song based on the Charge of the Light Brigade during the Crimean War). So, part one: war. Got that? Good.

3. THE VENUE TRANSFORMS INTO A CHURCH
The stage plunges into darkness as roadies ready the stage for the second act. There’s ominous rumblings and clanking before the lights go up to reveal a magnificent church chancel, with stained glass windows featuring chapters from band mascot Eddie’s life. It’s a truly breathtaking moment. You’ve got images from The Trooper, Seventh Son Of A Seventh Son, The Number Of The Beast and Powerslave releases flanking an ornate centrepiece. Eagle-eyed fans will be able to spot the crest of a certain East London football team too. The church setting remains during the second part of the set which features Revelations, For The Greater Good of God, The Wicker Man and the epic Sign Of The Cross, an X Factor album track that has not been performed since 2001.

4. BRUCE DICKINSON CHANGES HIS CLOTHES. A LOT.
The Maiden frontman has a penchant for dressing up and using props during their performances, but the Legacy Of The Beast show ramps up that sense of the theatrical; you'll see many costume changes during the set. He’s dressed as a World War II fighter pilot during Aces High, dons a snow jacket and winter trapper’s hat during Where Eagles Dare and a cassock as he leads the metal congregation through Revelations. For The Sign Of The Cross, he’s in a black cloak and wields an illuminated crucifix, while Fear Of The Dark sees him resplendent in a Venetian masquerade mask and top hat. Oh, and he’s clutching a green lantern, too. During Number Of The Beast, he appears in a leather biker jacket similar to the one he wore on the back cover of that album. Imagine wearing all that under the lights. No wonder he looked like he'd been swimming by the end of the show.

5. EVEN SOOTY DRESSES UP FOR THE OCCASION…
Ever since drummer Nicko McBrain’s appearance on The Sooty Show in 1988, the mute yellow bear has become a staple part of his kit. In recent years, Sooty has been dressed as a pharaoh to complement McBrain’s Powerslave-themed kit and a military uniform during their Matter Of Life And Death tour. But tonight, and for the remainder of their current trek, the miniature TV star will be dressed as the eponymous light cavalry solider from The Trooper artwork, complete with a moustache befitting an 1850s chap. Absolutely no detail has been overlooked for their latest stage production.

6. THERE’S AN EPIC SWORD FIGHT!
Alongside Bruce’s multiple costume changes, there are props in abundance this evening. A 10-foot-tall Eddie enters the stage and goads Bruce during The Trooper; he engages in a tense duel with Dickinson, who shows off his professional fencing skills in front of the 15,000-strong crowd. At the song’s climax, Dickinson curries favour with the Finnish capital by producing the blue and white Nordic national flag, also known as the siniristililippu – try saying that after a couple of bottles of the Trooper ale, hic – and plants it opposite the Union flag. During Hallowed Be Thy Name, Bruce sings from behind bars before being faced with a hangman’s noose. For those wondering if he’ll attempt an Alice Cooper-style execution stunt can rest easy in the knowledge that he won’t and instead bats it around like a kitten. Phew!

7. THERE’S A TON OF PYRO, TOO
Flight Of Icarus – a Piece Of Mind single which has not been performed since their 1986 Somewhere On Tour dates – is one of many highlights. Equipped with a flamethrower strapped to his back, Bruce goes what they call in the pyrotechnics trade as ‘full Rammstein’, and shoots six-foot bursts of fire throughout the song as an gigantic, ill-fated Icarus is suspended above the stage. Bring some sausages and he might cook them for you if you ask nicely.

8. STANDING NEAR THE FRONT? YOU MIGHT GET A SUNTAN
There’s a spectacular wall of fire during pivotal moments of The Number Of The Beast. Even those standing as far back as the mixing desk can feel the heat of the flames, so it’s a wonder the band don’t lose their eyebrows. Look out for the showers of sparks during their eponymous set closer, too.

9. THE DEVIL MAKES AN APPEARANCE
Following the military and religious-themed aspects of the set list, the final part of the set deals with death by misadventure (Flight Of Icarus), scotophobia (Fear Of The Dark), satanic rituals (The Number Of The Beast) and sheer bloodshed (Iron Maiden). With new backdrops depicting Bosch-like lakes of fire, Eddie reappears as the devil during their title track, a gigantic horned beast with a pentagram carved into his forehead. It may be an inflatable, but looks like a sculpture, such is the depth and detail of the prop. Finnish Iron Maiden fans who’ve brought their young children tonight may be facing a rough evening as they deal with their traumatised little ones’ disturbed sleep.

10. LOOK, THIS MIGHT BE THE BEST MAIDEN SET YOU’LL EVER SEE
Seriously, this could be their finest set to date. If you’ve got tickets for their UK dates in July and August, you’re in for a treat; from the set list, the performances and thought put into their stage production, we can guarantee no Iron Maiden fan will walk away from the show without grinning like an absolute maniac.

The Legacy Of The Beast tour comes to the UK on the following dates below:

Check out the awesome poster for the tour!

Legacy Of The BeastIron Maiden