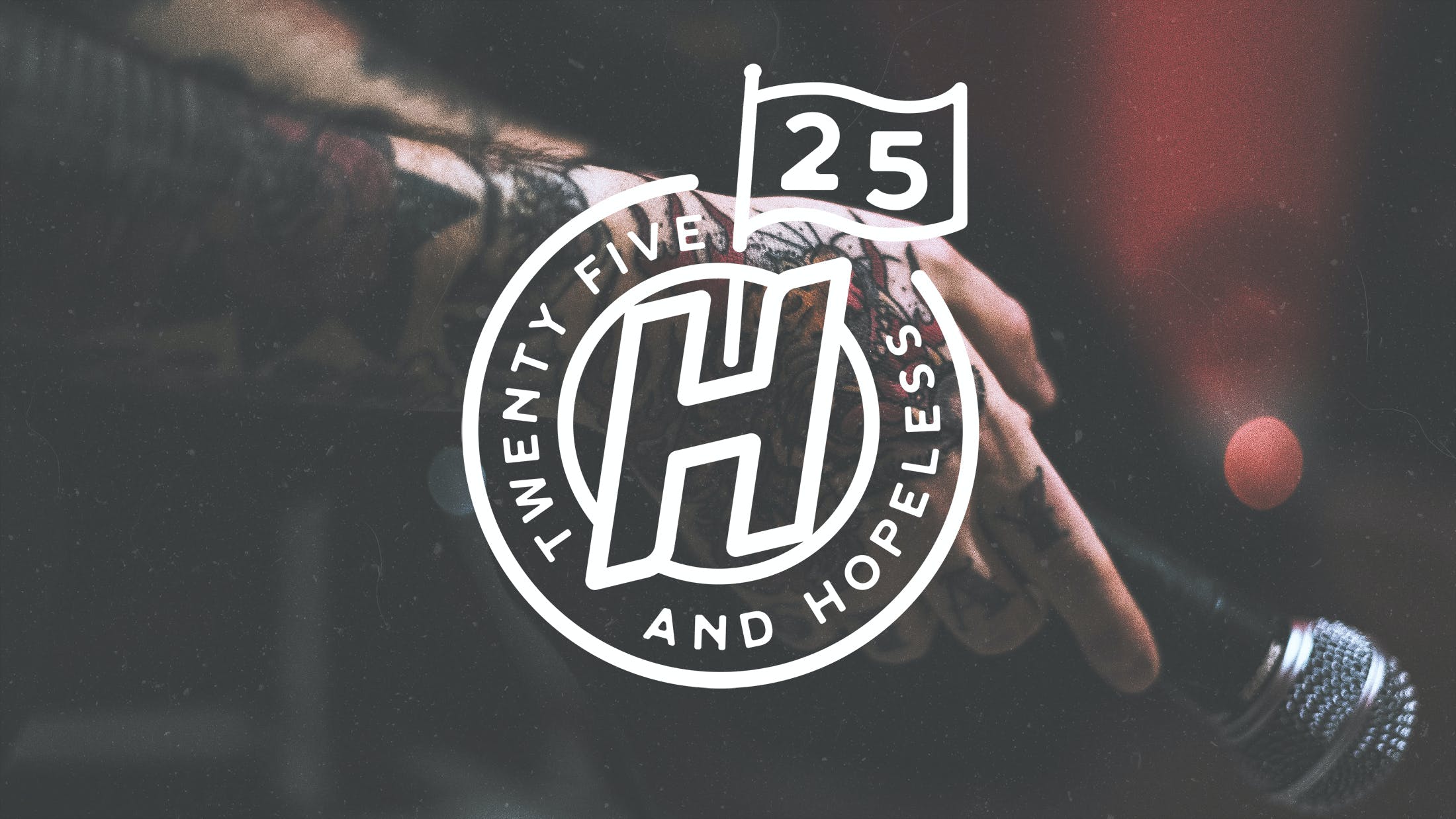 When Louis Posen founded Hopeless Records in 1993, the project was little more than a dare made by a band he’d been shooting a college video with. 25 years later, having launched the careers of Avenged Sevenfold, All Time Low and Thrice, Hopeless is now one of the labels most synonymous with the world of punk rock, and oversees a successful non-profit organisation, Sub City, which has worked with bands and fans to raise millions of dollars for charitable causes. To celebrate this milestone, the label is releasing the Songs That Saved My Life compilation – an LP that features covers by Neck Deep, Taking Back Sunday and many more – on November 9, with the proceeds going towards charities that support mental health. Here, Louis, alongside Neck Deep’s Ben Barlow, Stand Atlantic’s Bonnie Fraser and Hands Like Houses’ Trenton Woodley, reflects on the journey that they and Hopeless have been on, outlining the lessons that can be learned from the label’s success over the past 25 years.

YOU DON’T NEED EXPERIENCE TO START A RECORD LABEL
“I studied film at university, and when I got assignments I’d make music videos,” Hopeless founder and president Louis Posen recalls. “One of the early videos I made was for Guttermouth, and when we were filming the video, the guys came up with the crazy idea of me putting out a record for them. I bought a book called How To Run An Independent Record Label, asked some friends, including Fat Mike, to help out and borrowed $1,000 from my brother. And with that, I put out the Guttermouth seven inch 11oz. in December of 1993.”

YOU CAN OVERCOME THE CHALLENGES IN LIFE
“1995 was when I decided to do Hopeless full-time,” Louis outlines. “That was largely because my eyesight was becoming poor – I was diagnosed with a slow-acting, degenerative condition when I was 19. As a young person I thought, ‘I’m not gonna pay attention to this,’ but by ’95 it was affecting me to the point where I knew I had to make some decisions. Luckily, I had Hopeless which was doing well, and that’s when we started signing bands like Dillinger Four, who had an international following. That helped us reach the next level.”

BACKING YOUNG TALENT IS ESSENTIAL
“Hopeless are so strong when it comes to scoping out small bands, which is exactly what they did with us,” explains Neck Deep vocalist Ben Barlow. “They’re one of the few labels that actually allows their artists to have creative freedom. I’ve heard numerous stories about other labels and how they control their bands, and Hopeless have never tried to do that to us. They’ve allowed us to take Neck Deep to the next level – we couldn’t have done it without them.”

AVENGED SEVENFOLD SUCCEEDED BECAUSE THEY WERE DIFFERENT “Working with Avenged Sevenfold was amazing,” Louis remembers. “When we signed them they were a very small band who were barely making it through their set without everything falling apart. But they were doing something different to everybody else with the stage-names and the makeup; there was a division between people liking and hating them, which was new to us, but very exciting. Waking The Fallen was the moment where they really figured out who they were and defined themselves. I remember them playing the first song they wrote for that record, Second Heartbeat, live: I was sitting in the Coconut Geyser in LA and there was maybe 20 people there, but I remember thinking, ‘This is it.’ That campaign felt very good from the beginning, and major labels came swarming immediately.”

OWNING YOUR IDENTITY IS VITAL TO A BAND’S SUCCESS, AND THAT’S WHAT ALL TIME LOW DID
“They knew exactly who they were and what they wanted to be, and they were very clear about it,” Louis says. Their first release with us was the Put Up Or Shut Up EP, which did very well, and they followed it up with So Wrong It’s Right, which is now a defining record of the pop-punk scene. At the time, a lot of people thought they were too cheesy and too pop, and I think a lot of labels turned them down because of that.”

ROCK MUSIC ISN’T DEFINED BY SOUND – IT’S ABOUT CULTURE AND LIFESTYLE
“It’s not about genre,” Louis states. “There are a lot of different sounds that feel like they are part of this community of music, but we try not to go too far outside of that community. While we know some fans are into both heavy and poppier music, we’re aware that the majority of them like artists that aren’t part of the mainstream. A band could sound like All Time Low, but if they don’t live and breathe our community and have that relationship with their fans, then that’s not something that’ll work well with us. We’re looking for bands that can establish that tangible emotional connection with their followers – that’s difficult to do, and it’s more important than writing a good song or being a good performer.”

THE UK IS A VITAL PART OF THE ALTERNATIVE MUSIC WORLD
“The UK has been so embracing of the Hopeless community, and that’s why we’ve invested so heavily in staffing across the pond,” Louis offers. “We’ve got six British bands now, and we feel like Hopeless is as much a UK label as it is an American one. We don’t look at ourselves as being from a territory, anyway, because for us this is about culture and lifestyle, and that can exist anywhere.”

YOU SHOULD TREAT ALL YOUR BANDS EQUALLY
“There’s a sense of honesty and drive with Hopeless,” explains Hands Like Houses frontman Trenton Woodley. “With other labels we’ve been on and around, we’ve seen how most of them have their focused artists and their also-rans, but Hopeless have such a good balance across the board. I don’t know of any band on the label who feels like they aren’t getting the energy and commitment they need. The enthusiasm they have for us is so cool – I’ve really enjoyed working with them.”

PASSION IS EVERYTHING
“We’d been talking to some other labels before we signed to Hopeless, but they seemed the most passionate about us,” says Stand Atlantic vocalist/guitarist Bonnie Fraser. “We want the people that work with us to be as passionate about what we’re doing as we are, and Hopeless are very supportive and in favour of the stuff we want to do. They’re a perfect fit for our band.”

THE MUSIC BUSINESS, LIKE ANY THAT DEALS IN ART, IS A TRICKY ONE “There are more problems than there are successes, because that’s just the nature of this business,” Louis explains. “We’re not selling cutlery, we’re selling art – it’s a nuanced, complex business. Our approach is that we believe in and invest in our artists, but they’re really running their own business, and we’re a support to them. We don’t treat our artists like employees or like we have some kind of control over what they do. At times they do things we agree with, and at times they do things we disagree with, and our approach is to have open communication, talk things through and let them know our opinions. Ultimately, it’s up to the band to communicate to the fans who they are and how they want to be perceived, and then it’s our job to emphasize that and take it to a wider audience.”

GIVING BACK IS IMPORTANT
“The success of Hopeless made us think there was an opportunity to do something beyond entertainment, so we decided to start a non-profit which would allow us to connect our bands with causes they’re passionate about, and bring fans into that process,” Louis outlines. “We started a non-profit called Sub City and added that branding to certain releases, which in turn helped raise awareness and money for selected charities – by now, we’ve raised over $2.5 million for non-profit organisations. We’ve just launched the Songs That Saved My Life project, which we’re all really passionate about. Neck Deep led that with their cover of Torn, and the full record is out November 9. There’s a serious issue in the world and particularly in the music scene with regards to mental health, and the goal of this project is to end the stigma of talking about mental illness and suicide, and to raise awareness about organisations that are working towards that goal.”

Hopeless Records' Songs That Saved My Life is available on November 9.