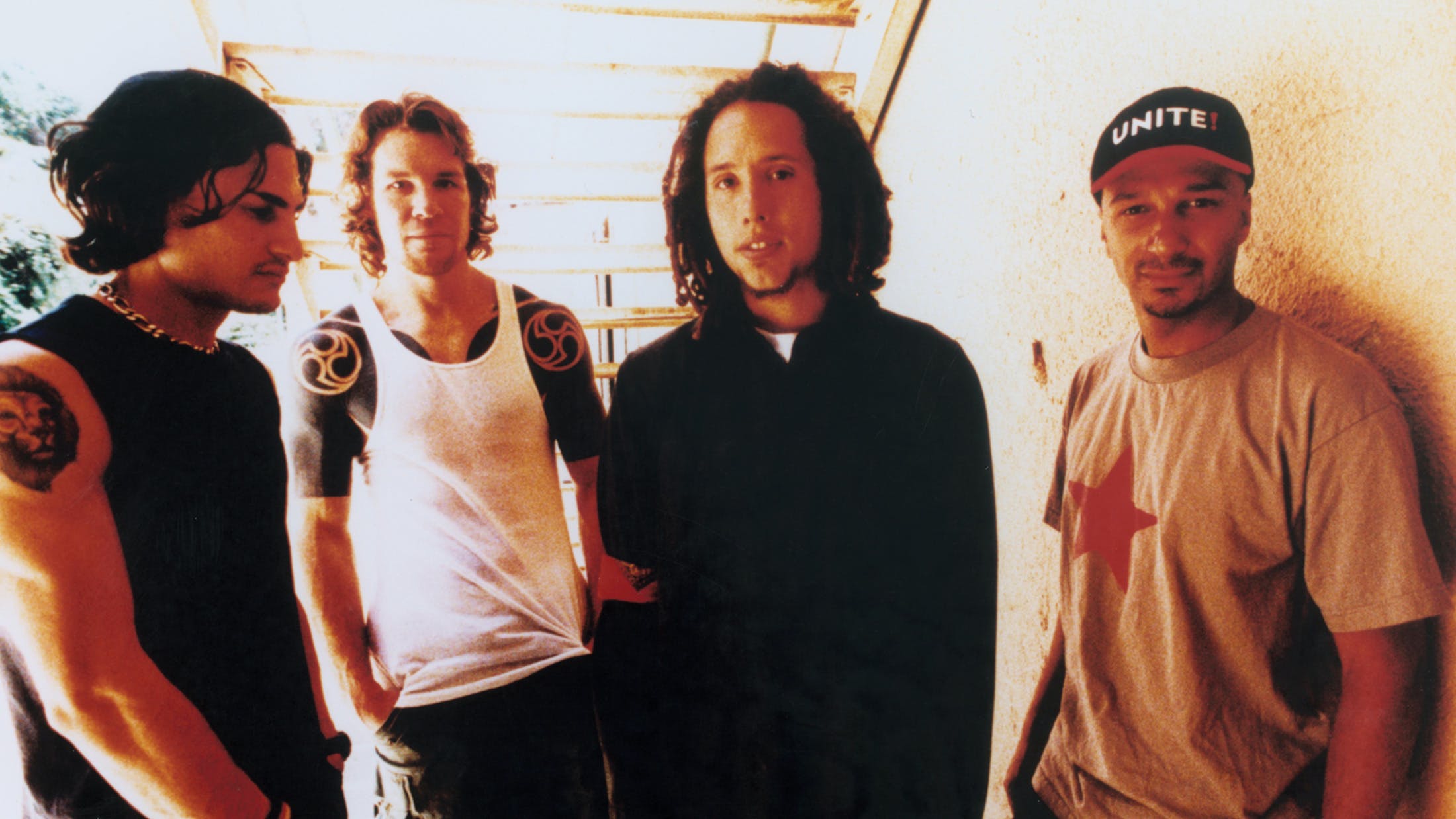 Few bands have ever lit a fire under heavy music quite like legendary LA crew Rage Against The Machine. Emerging from the tension and discord of a city ready to erupt in 1992’s infamous race-riots, their meld of frontman Zack de la Rocha’s furious rhymes, Tim Commerford and Brad Wilk’s punchy rhythms and Tom Morello’s cutting-edge riffage packed not only a furious righteousness that had been missing from from popular music for the best part of the 1980s, but also a groundbreaking sound that would crack genre boundaries forever.

For many, Chicagoan punks Rise Against feel like the natural successors to Rage Against The Machine. From undiluted social commentary and gritty musicality to having toured with Rage guitarist Tom Morello (in his The Nightwatchman guise) and their very name calling to mind their forebears, there’s much of the same raised-fist sensibility there. Deconstruct a little, of course, and the Tim McIlrath-led quartet are very much their own beast, drawing equal influence from more straightforward punk artists like Bad Religion and tending to direct their ire at corporate and social institutions as much as political ones. Still, we wouldn’t bet against them lighting up a Molotov if the occasion called for it…

There’s a reason Rage Against The Machine chose Atlanta hip-hop duo Run The Jewels – producer/vocalist El-P and outright rapper Killer Mike – as main support for their comeback tour. While lacking the instrumental punch of Tom, Brad and Tim, RTJ share so many of the most important aspects that made RATM great: malevolently off-kilter beats, righteous anger and relatable everyman personas. In continuing Rage’s on-the-nose gospel while forging their own sonic path, they clearly understand the value of innovation, experimentation and finding a fresh identity of their own, too.

Written into the liner notes of Rage’s self-titled 1992 debut is the message that “no samples, keyboards or synthesisers used in the making of this record”. After the polished, preening mainstream rock that had dominated the decade before – and well in line with the grunge revolution that paralleled their emergence – Rage wanted to precipitate a new era of revolutionary rock. Fellow Californians Deftones had been bubbling under until that point, but took up the invitation to greatness with 1994’s debut LP Adrenaline. Their politics lay low in the mix, but moments of explosive riffs and furious vocals called to mind Rage while more reflective passages saw them push further towards new horizons.

Given, Gainesville punk rockers Against Me! draw from the same history of protest music and political punk that helped shape the rock side of Rage Against The Machine – MC5, Dead Kennedys, Fugazi – as much as from Rage themselves, but they certainly rode the earthquake of political awareness that the Californians triggered. Although the obvious, broad focus dissent of tracks like Turn Those Clapping Hands Into Angry Balled Fists has been replaced by the personal politics of Transgender Dysphoria Blues in recent years following Laura Jane Grace’s transition, the fiery uncompromised ethos of holding tight to what you believe in still burns bright over 20 years in.

While firecracker FEVER 333 frontman Jason Aalon Butler (a native of the same streets as RATM) delved ever deeper into political territory with letlive.’s final LPs The Blackest Beautiful and If I’m The Devil…, it was only after that band’s 2017 dissolution that he was able to fully embrace his activist heart. Spurred on by producer John Feldmann and blink-182 drummer Travis Barker, he set out to address the lack of social awareness, diversity and moral purpose – those qualities Rage benchmarked – in modern rock. With the looser instrumental input of former The Chariot guitarist Stephen Harrison and Night Verses drummer Aric Improta and the percussive hip-hop influence of songs like Made An America and Hunting Season, the old DNA feels box fresh and alarmingly relevant in the here and now.

Contemporaries on the Los Angeles scene, System Of A Down grabbed the baton in many ways from Rage, carrying forth the genre-melding rock innovation and uncompromising politics at the forefront of the mainstream, with smash albums Toxicity and Mezmerize / Hypnotize smuggling the potent rhetoric of tracks like Prison Song and B.Y.O.B. into teenage bedrooms around the world. System vocalist Serj Tankian even collaborated with Tom Morello on grassroots activist organisation Axis Of Justice further down the line, while drummer John Dolmayan was also taking influence, citing the reunited Rage (along with Tool and Red Hot Chili Peppers) in an Instagram post in December 2019 entreating his SOAD bandmates to put their differences aside and get back into the studio. “These bands can get out of their own way and work together for a common goal, maybe the fourth can, as well…”

Okay, okay, we’re pretty sure that no-one in Rage would thank us much for reminding folk of their integral role in triggering the nu-metal movement that dominated heavy music either side of the millennium, but the rap-rock influence is absolutely undeniable. Jacksonville meatheads Limp Bizkit make for a most compelling contrast. From Wes Borland’s slamming riffage to Fred Durst’s all-attitude lyrics, they’ve got all the blunt force and smash-mouth attitude of Rage, but their vacuous lyricism potently reminds us that no matter how punchy the sound, it won’t have half the impact without a worthwhile message carried within…

Started in Portage La Prairie, Manitoba all the way back in 1986, Canadian punks Propagandhi technically pre-date Rage Against The Machine by a good five years. While their early era was spent exploring the anarchic energy of old-school punk rock and feel-good factor skate-punk, however, it was only after Rage’s explosion onto the scene that their message became more organised, pointed and politicised, with 1996’s seminal Less Talk, More Rock vociferously espousing values from anti-capitalism to veganism on pointedly-titled tracks like Apparently, I'm a 'P.C. Fascist' (Because I Care About Both Human and Non-Human Animals) and The Only Good Fascist Is a Very Dead Fascist. A quarter of a century on, with 2017’s fantastic Failed States still ringing in our ears, their fire still burns.

Plenty of bands talk the talk, but few truly walk the walk. Pennsylvanian anarcho-punks Anti-Flag unquestionably fall into the latter category, having courted conservative controversy from the very moment they named the band and refusing to let up over 12 albums since. They’ve supported Rage and been involved with its constituent members on and off over the years, but having started The Underground Action Alliance, Military Free Zone (a group to protest a clause in the No Child Left Behind Act, which gave military recruiters automatic access to students' personal details) and The Bright Lights, as well as actively supporting everyone from Greenpeace to PETA to Democracy Now! they’ve also very much raised the bar.

If Rage did most of their work in the mainstream, it didn’t stop them springing some like minds from the underground. Purporting to have emerged from one of New York City’s infamous East Village squats, unhinged ska-punks Leftöver Crack have taken the thrilling ideas of smashing the system to their filthiest, most furious extremes. With provocative album art depicting perpetrators of the Columbine massacre Eric Harris and Dylan Klebold hoisting 40 oz. bottles or ex-president George W. Bush spraying gasoline on his VP Dick Cheney in front of the burning Twin Towers and having had to jump ship from Tim Armstrong’s label Hellcat to Jello Biafra’s more insurgent Alternative Tentacles to be allowed to name 2000 EP Shoot The Kids At School, they perfectly appreciate the currency of controversy.

There are over 5,000 miles between London and Los Angeles, but the same rebel heart beats within Watford punks Gallows as Rage. Whether in their original guise with flame-haired firebrand Frank Carter at the helm or today’s Wade MacNeil-led iteration, the raw aggression and willingness to push at musical boundaries owed much to those aforementioned scene-shifting foundations laid by Rage’s experimental, aggressive musicality. It’s their 2009 masterpiece Grey Britain – one of the all-time-great UK rock records and still a benchmark for the band – that feels most indebted to their Californian forbears, grasping a major-label opportunity to ambush the general public with their own rotten reflection, cast in harsh monochrome and smashed into their half-asleep face.

Stray From The Path

We probably don’t need to explain what righteous Long Island metalcore collective Stray From The Path have taken from Rage, with the punchy musicality and strident messages of songs like The House Always Wins, Badge & A Bullet and Goodnight Alt-Right knocking the air out of the chest of anyone who dares come within earshot. That doesn’t stop the band waxing lyrical themselves, though. “I get chills thinking about it,” frontman Andrew 'Drew York' Dijorio remarked after the RATM reunion was announced. “It’s a dark time. It’s so good to know that they’re gonna come back and do what they do best: unite people, raise awareness and spark a lot of attention again. I think it’s gonna be more of a revolution than a reform. They’re one of my favourite bands; I think these shows will be huge.”