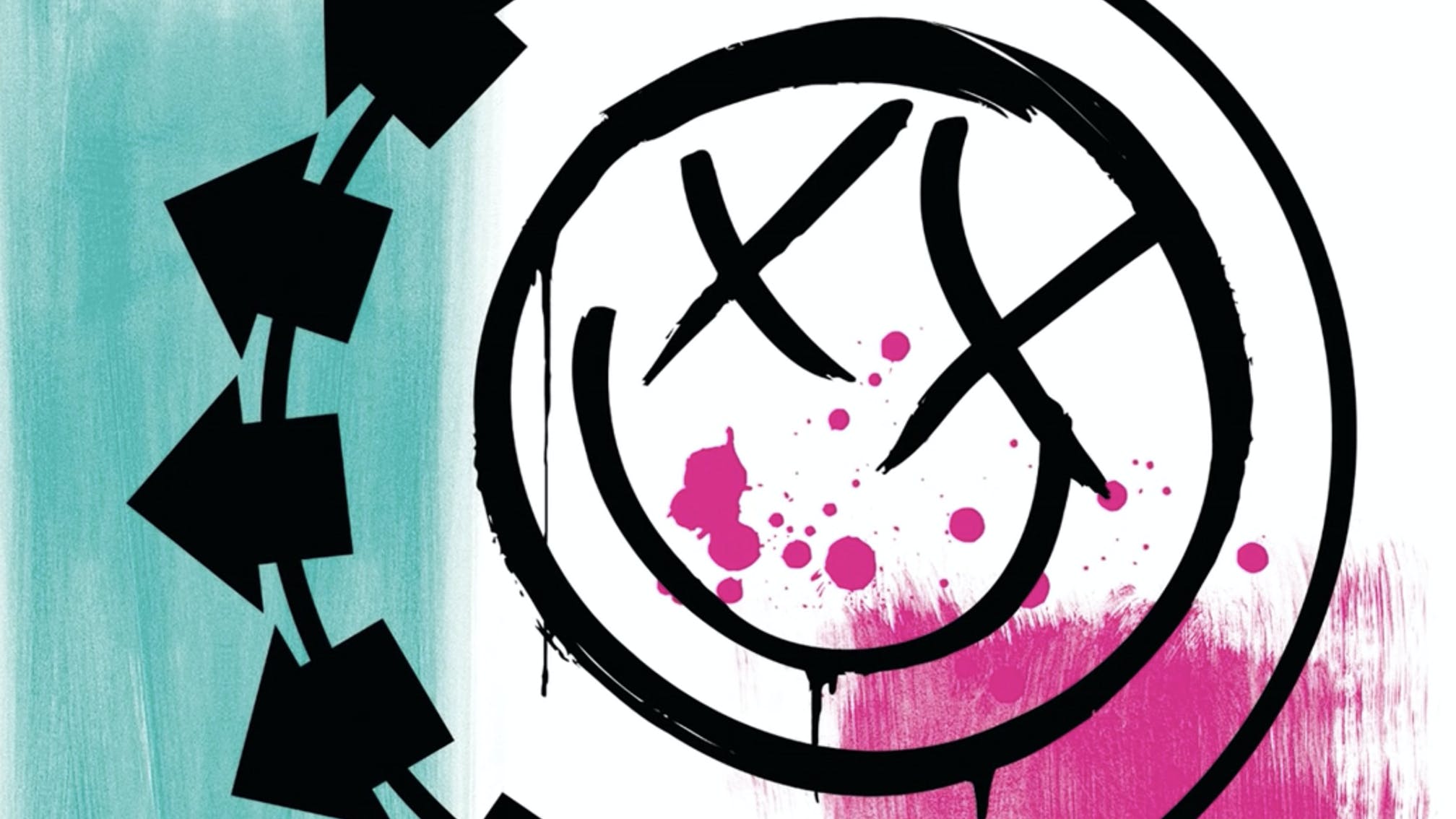 Coming after tense times in the band, side-projects that left the excluded members feeling cold, and some major life events, it was a conscious attempt to rebuild and reinvent. The trio “attacked” songs together, creating an album that split their existing fanbase while winning admiration from other circles.

What can we learn, listening back to it in futuristic 2021?

1. Self-titled isn’t the same as Untitled

Doing a self-titled album as your fifth full-length is a statement of intent. This is this band as they are meant to be. Sure, we’ve done a bunch of other stuff, but this is it now, this is us, undiluted, honed to perfection. blink were adamant that the album was in fact Untitled, itself a statement coming on the heels of two of the most beautifully puerile album titles in history, Enema Of The State and Take Off Your Pants And Jacket.

The Untitled album, for a lot of its running time, doesn't really sound like blink-182. Or rather, it doesn't sound like the blink people knew and loved, the young, dumb, three-chord catchy sing-alongable crowd pleasers. There's a lot more ambition on show, with long instrumental sections drawing influence from a much wider field than the band's big-shorts So-Cal roots, while still maintaining enough of the angst and killer hooks that had got them where they were. It’s a mixed bag, but an impressive one.

Looking back at it, Mark told MTV: "That album changed everything for blink-182. The way we write songs, the manner in which we record them, the way we think of ourselves as a band, everything. It marked a huge turning point in our career. I think it changed the way people thought of us, too. We were no longer the silly skate punk kids from California. Well, we were – and we still are – but from then on there was something more."

Both Mark and Tom were fathers by the time they were recording Untitled, and Travis’ then-wife Shanna Moakler was pregnant. All three band members were growing up, and the band had existed for 11 years. Just like a child of that age hitting the awkward years of adolescence, blink were suddenly uneasy with the identity they had crafted.

"Travis was like, 'Don't think of this as the next blink-182 record – think of it as the first blink-182 record,'" Mark later remembered. "So we had this mindset that we weren't going to second-guess ourselves… [or] worry if people are going to accept it or if it sounds like blink-182. If it was an idea that we wanted to pursue, we were gonna pursue it. And so we tried out all these different ideas and it was like a musical laboratory."

blink were very much men by the time this record came out, and getting further and further away from the teenage angst that they’d written so much about before. “I think that our lyrics before were about things that happened a long time ago: ‘Hey, remember that awful feeling in high school?’” explained Mark. “I wanted to write about exactly what’s going on in my head right now.”

5. Find inspiration where you can

There are writers who find inspiration from beautiful views, from walks in forests, from intimate relationships. For Untitled, blink-182 found inspiration in weed and looping pay-per-view pornography, holing themselves up in a rented house with enormous amounts of both.

"If I wasn’t smoking half of Colombia I probably ran up $3 million in adult film charges" said Tom later. Reflecting on the recording process in his autobiography, Travis reminisced: "That was a good time in my life. I was smoking just enough weed and taking just enough pills."

Both Tom and Mark cited paranoia as a big influence on the record, perhaps in some way associated with the aforementioned industrial quantities of weed. “I’ve just felt this paranoia about the world,” Mark told the Milwaukee Journal Sentinel, while Tom told Punktastic: “[My] having a kid affected the record in that it makes you more paranoid.”

8. If you want to be taken seriously, don’t do 20-second gag songs

“When we did the Untitled record, we just didn’t feel like putting joke stuff on it, so we didn’t,” Mark told Spin. “It wasn’t really a deliberation or a real introspective [thing like], 'Are we going to joke on this one, are we not going to joke on this one?' We just didn’t feel like it on the Untitled one, so we didn’t.” The approach all seemed consciously mirth-free, with the album’s artwork and videos all determinedly devoid of humour – the occasional smirk in the Always video is about as jolly as it gets.

Speaking of the video for Always, it’s bonkers. It’s an amazing-looking three-way split-screen that kind of blows your mind if you think about how it was done. Filmed in the studio usually inhabited by Australian children’s act The Wiggles, and starring pop star Sophie Monk as the whole band’s ex-girlfriend, there’s some camera trickery, some incredibly tight choreography, some old-fashioned theatrical quick-swap kind of things, as well as tearaway pants and an endearingly knackered bunch of flowers.

Watch it, and try to imagine how that would be planned out on paper. No idea. Well done, director Joseph Kahn.

“That was the most technically difficult thing we’ve ever shot” Mark later recalled. “It was really difficult, and we were drinking a lot of red wine, so it became increasingly difficult…”

10. And so do some people’s voices

Tom’s accent is noticeably different on this album, particularly on I Miss You. His verse on that song has become something of a meme, been fascinatingly analysed by a linguistics professor, and been edited into an impressively maddening 10-hour version.

All four videos released from the album – Feeling This, I Miss You, Always and Down – have a lil’ bit of snoggin’. That’s fun, right? They’re completely different, from the technicolour of Always to the none-more-goth I Miss You to the frenetic, anarchic Feeling This to the sun-bleached sepia of Down, but all feature some good old-fashioned lip-lockin’. Kissing! Try it, it’s great!

All Of This features The Cure’s Robert Smith, providing the strange, but not unwelcome experience of, well, hearing Robert Smith singing what is unmistakably a blink song. If anything it sound like Robert is singing the part that would normally be sung by Tom, and Tom himself is singing the more melodic Mark part. It was a collaboration that the band thought The Cure man might not be into, concerned that their reputation as dick-joke peddlers might put him off.

"It was like a dream come true," said Tom. "We sent the music to him in England of what was on the record. I didn't think he would be [interested in contributing] only because, who knew what his perception was of our band in the past? But what he said was, 'Nobody knows what kind of songs you are going to write in the future and nobody knows the full potential of any band. I really like the music you sent me,' and he wanted to do it. And it was just amazing."

13. Not everything that looks like a puzzle is a puzzle

This was the third blink album to be mixed by Tom Lord-Alge, a name that looks maddeningly like it could or should be an anagram of Tom DeLonge. It isn’t, it’s a guy named Tom Lord-Alge who mixes records. He’s really successful. He also did Fall Out Boy's Infinity On High and From Under The Cork Tree, and Limp Bizkit's Three Dollar Bill, Yall$. It just… looks like a puzzle. It isn’t a puzzle. Sometimes names are just similar.

14. However important something is at the time, it can slip your mind later

Despite pouring their all into the album, blink needed reminding when its birthday came along, with the band only finding out about its 10th anniversary on the internet. In the decade between 2003 and 2013 a lot had happened – they'd gone on an “indefinite hiatus” that ended when Travis was in a horrible plane crash and his bandmates put aside their differences to rally round, reforming in the process. "Someone on Twitter replied to me, pointing out that the 10-year anniversary of the album was approaching,” admitted Mark.