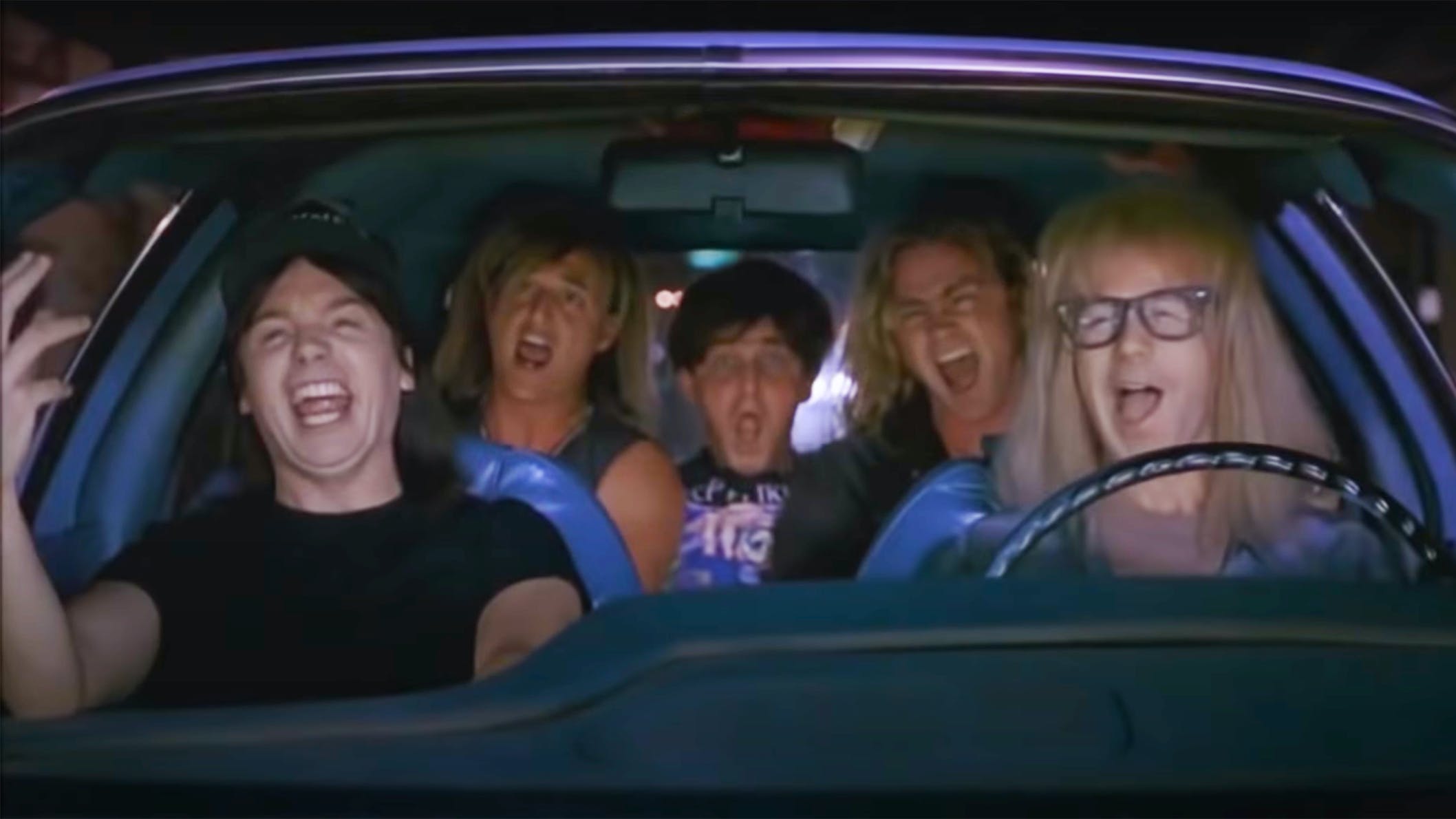 “You’ll laugh, you’ll cry, you’ll hurl” is one of the all-time greatest movie taglines, six words that let you know you’re in for a lot of fun. Fittingly enough, it’s attached to Wayne’s World, the 1992 comedy that made Mike Myers a superstar, spawned a zillion catchphrases, reminded the world it loved Queen and showed Alice Cooper’s comedy skills like nothing else. In fact, 30 years on, it seems clear that Wayne’s World is the greatest movie ever made about rock music.

It’s a bold claim, sure, but the movie backs it up.

(There is, obviously, a massive argument to be made for This Is Spinal Tap, a total masterpiece of a movie and one of the funniest anythings – not just movies, anythings – ever made. But there are a lot more fans out there than there are musicians, and while Spinal Tap is inarguably the greatest movie ever made about being in a band, nothing captures the magnificence and silliness of being a rock fan like Wayne’s World.)

Somehow it wouldn’t work if Wayne and Garth were themselves musicians. They make a TV show, of course, and the plot, as much as there really is one, concerns its fate in the hands of corporate interest… but that doesn’t really matter. Their show appears to involve no work of any kind. It’s just a pair of goofy metalheads hanging out.

Key to the movie’s magnificence, and the character that makes it transcend from simply 'very funny' to 'full-on masterpiece', is Wayne’s best friend, Garth Algar, portrayed incredibly by Dana Carvey.

Garth is a misfit, a super-shy nerd who got pubes really late (Dana was 37 when he shot this, Mike 29), and won’t touch anyone (declining a high-five from the late Meat Loaf in the “shitty Beatles” scene) – there is a lot of speculation online that the character might have Asperger’s or autism spectrum disorder. But a bit of Aerosmith comes on and he’s in his element.

In fact, the whole movie is like a love letter to the joy of finding your thing.

Director Penelope Spheeris knows a lot about people finding their thing. At the time of making Wayne’s World, she had made the first two parts of her groundbreaking documentary trilogy The Decline Of Western Civilization. The first involved her spending two years embedded in LA’s punk scene while the second was subtitled The Metal Years. In the making of these, she spent huge amounts of time with people who had found their thing – lifers dedicated to the music they love.

She understood the seemingly paradoxical combinations of absurdity and deadly seriousness, hard work and ridiculous excess, absolute earnestness and hard-partying frivolity that proved – and continues to prove – so intoxicating. As she told Vanity Fair, “I knew something about headbangers.”

The headbanging Bohemian Rhapsody sequence, despite being one of the most beloved parts of the movie, was by most accounts incredibly unpleasant to film. Mike and Penelope clashed endlessly, as take after take took their toll on the neck muscles of the cast. The director told Entertainment Weekly of Mike, after four hours of painkiller-assisted headbanging, “You should have heard him bitching when I was trying to do that Bohemian Rhapsody scene: ‘I can’t move my neck like that! Why do we have to do this so many times? No-one is going to laugh at that!'”

Mike also threatened to quit the film entirely if a different song was used. He told the podcast WTF With Marc Maron: “[Penelope and the producers] wanted Guns N’ Roses. Guns N’ Roses were very, very popular, they were a fantastic band. […] Queen, at that point, not by me and not by hardcore fans, but the public had sort of forgotten about them. Freddie [Mercury] had gotten sick, the last time we had seen them was on Live Aid and then there were a few albums after where they were sort of straying away from their arena rock roots. But I always loved Bohemian Rhapsody, I thought it was a masterpiece. So I fought really, really hard for it. And at one point I said, 'Well I’m out, I don’t want to make this movie if it’s not Bohemian Rhapsody.'"

It was the right choice. The scene shot the song back into the charts, taking it to number two in the U.S. where it had previously peaked at nine – not bad for a 15-year-old track. A new video incorporating footage from the movie was released, which Mike was mortified by, comparing it to “whizzing on a Picasso”. Dana manifestly doesn’t know the words, mouthing nonsense along to it, but it somehow works.

It wasn’t all stress and power struggles, though – a scene where Wayne and Garth lie on a car bonnet and Wayne laughs uproariously to a ridiculous question about Bugs Bunny was a genuine reaction from Mike to an ad-lib from Dana. It’s one of the most joyful moments in a movie full of them: two best friends, who happen to be metalheads, having the time of their lives.

It should obviously be said that there’s a bunch about Wayne’s World that, like many movies from three decades ago, hasn’t really stood the test of time. Having a catchphrase that is meant to suggest you are spontaneously getting an erection and saying it every time at attractive woman walks by? That’s fairly sub-optimal behaviour by any metric. Women in general are given pretty short shrift by the movie, which features about five female speaking roles in total. Milwaukee’s population in the 1990s was about 30 per cent African-American, which isn’t reflected at all in the cast, who are all white apart from the Hawaiian Tia Carerre.

But, God, it’s funny. A lot has been written about the majesty of the Alice Cooper scene, the revelation that when backstage, the godfather of shock rock enjoys discussing local history and Native American etymology. It is of course magnificent, and Alice still has 'We’re not worthy!' yelled at him on a daily basis. The scene originally went on for longer, with Wayne and Garth’s insistence that they are not only unworthy but “scum” getting more and more extreme.

And there’s so much more. Chris Farley’s cameo as an extraordinarily animated, well-informed security guard. Ed O’Neill’s murderous soliloquy. The incredible delivery of, 'It certainly does suck!' There’s so much in there – the exchange "Do I scare you?" "No" “Would you like me to?” is like the 50th-funniest bit in it, and is great.

The influence that Wayne’s World had on the worlds of both music and comedy was huge. Rock fans with extensive collections of hairnets and name-tags suddenly saw themselves reflected on screen. Mastodon’s Brann Dailor once told Kerrang!: “The first time I saw it, I just thought, ‘Hey, that’s me! That’s me and my friends!’ We were heavy metal dudes with long hair, hanging out in basements.”

The jokes about product placement and plot about not compromising your artistic integrity for money – even if that artistic integrity is being used to make something very daft – undoubtedly seeped through to a generation of young musicians rewinding the VHS tape for the hundredth time. It’s hardly an invitation to smash the system (and it’s a bit odd seeing as the finale involves getting Cassandra’s band Crucial Taunt signed to a major label) but it’s something.

30 years on, Wayne’s World is still hilariously funny and completely charming. It’s near-impossible to watch it without just wanting to dive through the screen and join Wayne and Garth, un-ambitiously hanging out and enjoying stuff. The plot might be basically nonsense, but no other movie does as good a job of conveying the simple joy of being with people who love the same things as you. It was amazing 30 years ago, it’s amazing now, and it’ll be amazing in another 30 years. Party on!