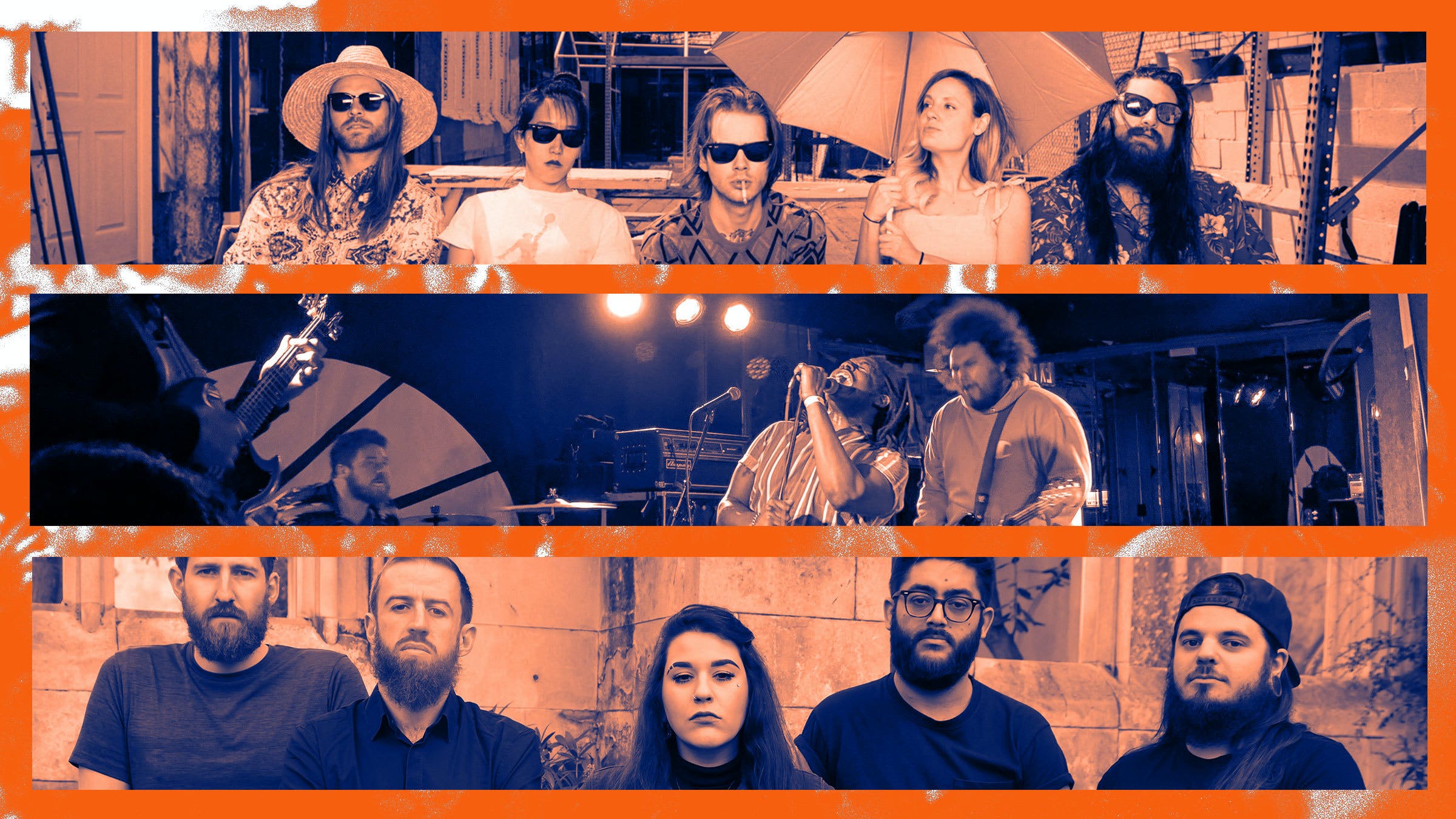 The evergreen debate about whether or not “x” band is hardcore seems more pointless than ever in our current age. Think about some of the most popular hardcore bands of the 2010’s: the good-humored funk of Turnstile, the industrial beatdown of Code Orange, the metalcore-adjacent Knocked Loose, and the thrashy riffage of Power Trip. Each of those bands could ostensibly land on the same bill in 2019, but they all pull from different flavors of heavy music and blend them with the basic ingredients of hardcore punk. And those aforementioned bands just scratch the surface of all the innovation that’s currently happening under the big tent of hardcore.

The savagely heavy Vein is bastardizing nu-metal with beatdown hardcore. The chugging Jesus Piece is bringing back the raw metalcore of the nineties and funneling it through a modern metallic hardcore lens. Show Me The Body are spraying corrosive hip-hop and noise-punk all over jittery hardcore gnashers. And Drug Church are stitching together a knotty composite of Quicksand-indebted post-hardcore and fuzz-loaded grunge. Again, those are just a select few of the wide swath of bands pushing the hardcore idiom forward.

Below are five lesser-known acts who messing with hardcore in supremely interesting ways. So much so that they’re actually expanding the definition of hardcore altogether, while also maintaining the integrity of its roots.

The Armed are a Kurt Ballou-directed hardcore collective based in Detroit. Each of their three records has featured a different drummer (members of Converge, Dillinger Escape Plan, and Baptists have participated) but no other members of the band have confirmed their identity. They tour irregularly, and when they do play it’s often under a pseudonym. They’ve even gone so far as to hire actors to pose as members of the band in order to deceive fans and journalists. Their ambitious crypticness is remarkable for a hardcore band, given the bare bones, “it is what it is” aesthetic of the genre of at large. But The Armed are far from the average hardcore group.

There are at least a dozen instances on their 2018 album ONLY LOVE (the clear standout in their discography) that sound like the sky being torn open. The first arrives within five seconds of the opening track, Witness; four synth strokes act as the starting pistol for a barraging grind rhythm, a vocal cord-yanking shriek, and a pelting rain of synth arpeggios. Another appears in the last third of the unexpectedly hummable Fortune’s Daughter, when bloody screeches are popping off behind the hooky alt-metal melody. But the most impactful one comes during the mighty closer, On Jupiter. The brooding, atmospheric intro is quickly sliced in half by a galloping bass line, which is then completely smoked by an electronic bass takeoff that’s the musical equivalent of a rocket getting sucked into a black hole.

The way this band contorts hardcore, grind, metal, and experimental noise into one cohesive sound is unparalleled. From their extreme dedication to maintaining their mystique, to their otherworldly brand of heavy music, there’s never been another band quite like The Armed — let alone a hardcore band.

The self-identified “sasscore” band SeeYouSpaceCowboy sound like a melange of Daughters, Converge, Pig Destroyer, Orchid, and just a touch of early The Devil Wears Prada. Actually, considering their throwback to zany, thematically unrelated song titles (I Am A Trans-Continental Railroad, Please Run A Train On Me and An Introduction For People Who Hate Introductions), maybe there’s a bit more TDWP influence than their sound leads on. Either way, somewhere in the middle of those myriad sonic comparisons is hardcore, and that’s the best way to describe SeeYouSpaceCowboy’s visceral, mosh-heavy, blast-beat-ridden sound.

Earlier this year they signed to Pure Noise Records and released Songs For The Firing Squad, a compilation of their EP’s from the last couple years with two additional new singles. Every song falls between the one and two minute mark, each has some form of breakdown, and most have some sort of jazzy, spoken-word, or just plain haywire deviation from the first two thirds of the track. A bulk of SeeYouSpaceCowboy’s members came up in screamo bands (but don’t call this band screamo), and Connie Sgarbossa’s vocal delivery is imbued with screamo’s distinct emotionality. But this band is fucking unapologetically brutal, and in their fledgling years they’ve already begun to innovate the last twenty years of hardcore in new and exciting ways.

Ithaca are another band that’s one part metalcore and one part screamo. However, unlike the grindy SeeYouSpaceCowboy, they meld those genres with the hammering metallic hardcore and squeaky clean production of Vein. Take the intro track, New Covenant, from their 2019 debut The Language of Injury. Wailing distortion and tense drum thwacks build anticipation for a snaky metalcore lead that contorts around an erratic, off-kilter rhythmic blast a la Dillinger Escape Plan. Enter the metallic mosh part, embellished with tasteful licks during the resolve. And suddenly the smoke clears and vocalist Djamilia Azzouz is unleashing a throaty screamo yowl over a clean guitar break. Ten seconds later a battering mosh part crashes through the mix, rivaling Code Orange and Harms Way in the same swing.

All of Ithaca’s songs are sweat-inducing exercises like that, offering short sections to catch your breath (some clean vocals do make it on here) and then punching it out of your lungs with the next note. Their push-pull between melodic and beatdown hardcore feels distinct to this era; a time when the barriers between metalcore, post-hardcore, hardcore, and screamo are less sturdy than ever. The current heavy music climate is essentially an open invitation for a band like Ithaca to come along and make a record as vast and genreless as this one, while still feeling like it fits under the blanket of hardcore.

Who says hardcore bands need guitars? Well, a lot of people probably do. But the NYC duo Machine Girl play a particularly punky and ferocious breed of the electronic sub-genre breakcore that could easily pass for hardcore when they rip it live. With an eclectic selection of synth sounds, booming bass, extraterrestrial vocal effects, and thunderous acoustic drums, Machine Girl make music that leaves a crater where genre boundaries once stood.

Their 2017 LP, ...BECAUSE I’M YOUNG ARROGANT AND HATE EVERYTHING YOU STAND FOR, is a mind-melting 38 minutes of what sounds like a computer achieving consciousness and deciding to wreak havoc on all of humankind. But their 2018 record, The Ugly Art, is the first Machine Girl album to feature the live drums on recording, which gives it the cathartically violent character of their live shows. Yes, it’s sort of like Death Grips, but with grindier rhythms and a vocal delivery that’s more punk than hip-hop. There’s only so many more places the guitar/bass/drums formula can go, and Machine Girl are offering an enticing peak at the possibilities electronic production offers the hardcore idiom.

Last year, the Philly hardcore band Soul Glo was travelling through Missouri while on tour when they were pulled over and approached by a state trooper with his hand on his gun. Each member of the self-proclaimed “all POC band” was individually searched, and one of them was arrested. In a statement they included in a GoFundMe (which, thankfully, ended up covering all of their costs and then some for legal fees), the bond the police posted was allegedly three times more than what they normally charge.

THE NIGGA IN ME IS ME (out 6/7 via SRA Records) is the first batch of new music they’ve released since then, and like Soul Glo’s past work, it approaches racism in America with the righteous, no-holds-barred fury the topic deserves. “You literally put your hands on me and all you’ll ever get is leave,” is a line yelled during 27, a track that was actually written before the arrest last year (and released shortly after as part of a three-song tour tape), which slathers the pervasive nature of police brutality with an eerie prescience.

However, just over a minute into that song, the punk instruments fade out and a dusty trap clap with a murky synth lead takes over. It’s suddenly a straight-up hip-hop song, and vocalist Pierce Jordan is rapping dexterously just moments after he was shrieking feverishly. This isn’t the only moment on the record when Soul Glo pull a move like that. The second track, 32, begins with a pounding bassline that Jordan yell-raps over for a bit until the beat is abruptly pulled away and a crushing hardcore chug seamlessly replaces it. It’s a brilliant and refreshing way to splice their sound, which, when not injected with hip-hop instrumentals, is already a peculiar tangle of jerky punk, noisy hardcore, early Touche Amore-esque screamo, and gnarly powerviolence.

Soul Glo aren’t just challenging the sonic conventions of hardcore, they’re challenging the historically (and continually) white punk community as a whole. It’s musicians and voices like theirs that are reigniting hardcore’s socially/politically subversive flame, and their music argues that the message has to transcend the gig or it’s not worth shit. Vital food for thought, laid out persuasively in this line from the track 24: “There’s a benefit gig for nobody, raising residue of middle class money / could we send those stacks back to the past in neat packs / and put them underneath the feet of everybody lynched / so they can catch their breath at last?”