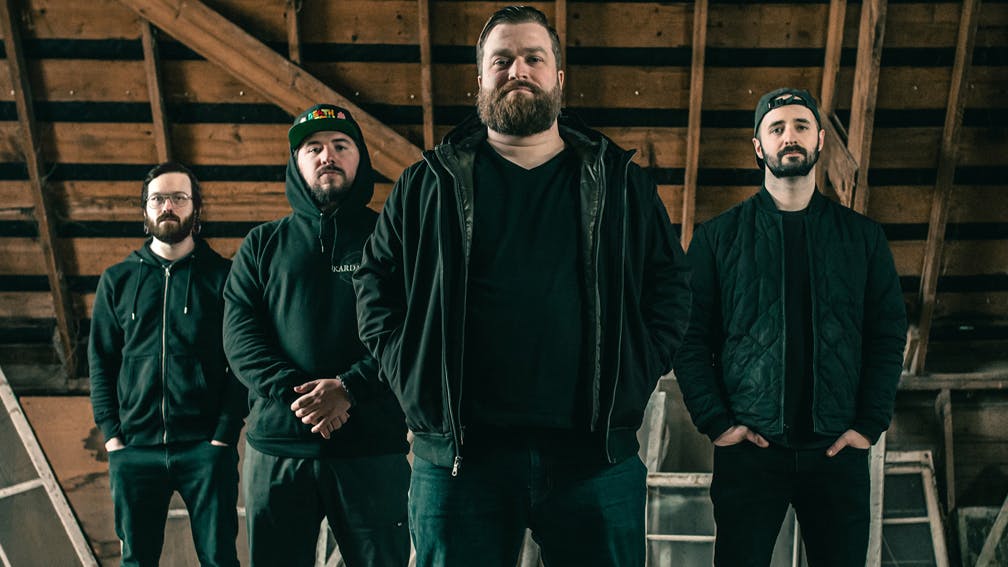 Though the name Kardashev may be new to you, the band have been stirring up their own unique blend of metal in the U.S. underground since 2012, creating something that stands out of any pack. Thanks to their 5/5-rated second full-length Liminal Rite, dropped in early June, you are likely to be hearing a lot more about the Arizona quartet, who have delivered a record that is both sonically pummelling and breathtakingly beautiful, carving out a distinct niche in the deathgaze genre.

While blackgaze has come to prominence in the hands of the likes of Deafheaven, deathgaze has not really been much of a ‘thing’. However, Kardashev have been providing the template for it for nearly 10 years. Tagged as a progressive deathcore unit early on, they never really fit into that bracket, and the manner in which they blend various styles of extreme metal with shoegaze and ambient elements is truly unique.

“I don’t know if we invented it, but we’re helping the genre come to the forefront of the metal world in our own way,” says guitarist Nico Mirolla. “There was something missing from our perception of metal back in the 2010s that we wanted to hear. We wanted ‘beautifully brutal music’. There are plenty of bands that achieve this now, but back then we weren't really aware of them so we tried writing the music we wanted to hear.”

2They’ve dropped one of the albums of the year

With Liminal Rite, Kardashev have charged right to the forefront of the 2022's best music. Taking the sound they have been building for a decade and pushing it further in every direction to deliver a more sonically diverse, lyrically deeper and more emotionally powerful collection it is the perfect blend of heavy and beautiful sounds, and demands repeated listens.

“Liminal Rite was written over the course of a few years, but really picked up once we had the confidence of Metal Blade [Records] behind us,” says Nico. “The plan was originally to make a record of eight songs with about 40 minutes of audio. Beyond that, we followed our instincts and desires and eventually it became an hour long with 11 tracks! I find that once I’ve entered the flow I wind up writing a song in one sitting, like Compost Grave-Song, or Between Sea And Sky, but never were we convinced that we were on to anything special, just that we weren’t compromising anything, and that was enough.”

3They have their own unique online community

The likes of Patreon have blossomed the last few years – especially during the pandemic. And Kardashev have their own community, with members joining under the ‘Enlisted Travellers Program’, and the outside motivation and encouragement they receive from this has been integral in the creative process. With members getting to hear early drafts of new material and even making suggestions on compositions and concepts, it is a truly interactive process, which is clearly working in the band’s favour.

“It allows our supporters’ dollar to go further,” enthuses Nico. “It’s great. We’ve made so many awesome connections with our fans, and they love it. They get to hear the album from its infancy all the way to completion, and all in real time. They give input on the songs, hear every mistake, and even help guide the direction we take with our merch.”

As well as being a great lyricist, Mark is a man possessing a larynx like no other. With the band’s roots in death metal it is of course essential that he be able to growl; and growl, roar and shriek he does, even crossing into black metal territory at times.

However, his range swings far in the opposite direction, and when he sings he does so in an aching, ethereal, angelic manner that soars above the music, whether it be blastbeat armageddon or something beautiful below him. Most bands would require two vocalists to pull this off but Mark is Kardashev’s secret weapon, and he lifts every track to the next level.

“Mark is incredibly capable in many, many ways and I’m just waiting for the day that he finds a better paying gig,” Nico quips. “I’ve known him since 2008 and and we’ve been through quite a lot together. He’s a great friend and an honest person, and his various styles, of which I think there are eight or more, allow us to write more freely and unrestrictedly because we’re confident that he’ll make it incredible or receive our feedback openly.”

Stating in their bio that they want to “break people’s hearts in a helpful way”, Kardashev tackle some very deep and challenging subjects in their lyrics, designed to provoke a profound emotional response. 2020’s The Baring Of Shadows EP tackles the issues of abandoning children, finding the dead body of a loved one, being widowed and expected to carry on, and coming to accept the death of a parent. The feedback the band received in response to this release moved them, and let them know they were achieving even more than they set out to.

“People from all over the world sent us messages and words of appreciation after they were able to mourn, cope, or otherwise gain closure thanks to the words and music of that record,” Nico explains. “I remember a few vividly. One man told us he called his brother after not talking to him for years. Another listener hugged his children and spent the weekend with them, just appreciating their relationship. A few others said the songs helped them face difficult issues that they had been ignoring, and this allowed them to start the process of healing.

"In some ways the record was cathartic, outreaching, and unifying. It reminded people that life is a shared experience, contrary to what we’re told by our social media feeds.”

Liminal Rite is out now via Metal Blade

Deathgaze masters Kardashev conjure up metal at its most beautiful on second album Liminal Rite.