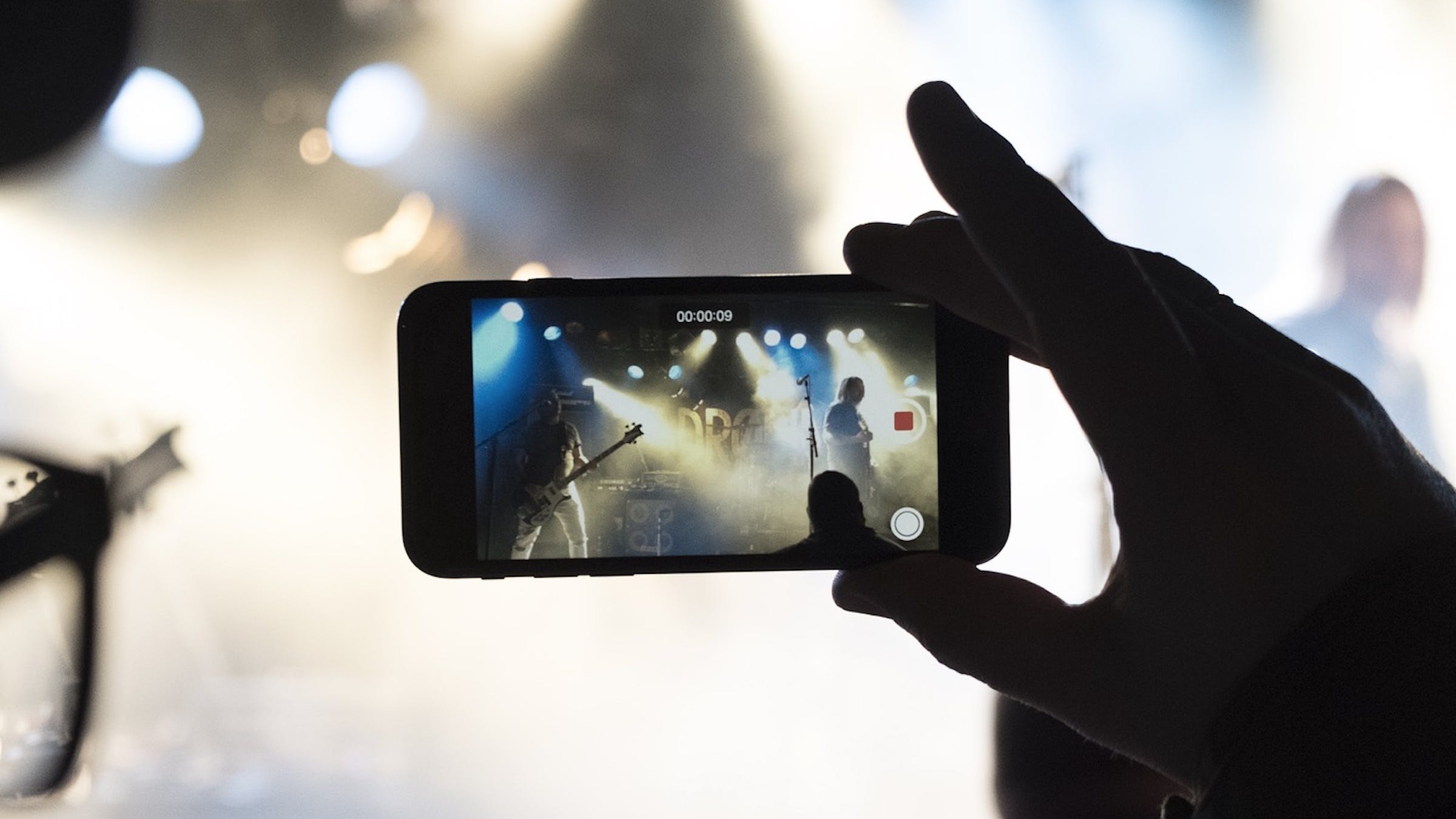 The minute the camera became a main feature of any cell phone, mobile devices have been hoisted into the air at shows to record snippets of -- and, if you're one of those people, entire sets by -- your favorite bands. More and more, phones are replacing lighters at shows, giving fans a chance to share their live experience across the entire world. On top of that, all of the recent explosive network growth means that even in a dark bar on a Wednesday night with a goregrind band losing their minds onstage, you're never disconnected from everyone you know.

A lot of musicians hate this. Sure, they're fine with you taking a picture or two and putting it on Instagram later (hey, free promotion) -- but some people seem to be more intent on getting a good show photo rather than actually watching the band. Meanwhile, persistent texting is perceived as a rude-ass announcement that the band isn't good enough for everyone's undivided attention. As such, some of the more old-school artists out there have taken a no-phones policy at their shows, while others are happy to just slap the phone out of your hand if they can reach you.

Here are seven artists who won't feel bad about taking your phone from you at a show:

Perhaps no band is more famous for having a no-phones policy than Tool. The progressive metal band have made a point out of asking fans to not use their phones to take pictures or record video during their concerts. What happens if you pull your phone out? Simple: security grabs you, and you’re asked to leave. As frontman Maynard James Keenan puts it, “No. Recording. Of. Any. Kind. For. 25. Years. Guided experience. Unplug and and enjoy the ride.”

...and A Perfect Circle

While Maynard’s chief band are known for not wanting cell phones out at concerts, his most famous secondary project is pretty firm about it as well. At a 2017 show in Pennsylvania, over 60 A Perfect Circle fans were ejected for trying to photograph or record the performance. The band even opened the night with a projection reading, ‘No photos or videos! Including photos and videos taken with cell phones. This includes all photo applications for cellphones! It will result in your ejection.’ Suffice it to say, Maynard ain’t fucking around.

Misfits frontman Glenn Danzig isn’t kind to fans who take photos, having put one such concertgoer in a headlock for it (to be fair, this dude was almost certainly a troll). The singer even began espousing the use of special phone sleeves at his concerts, to be only unsealed in designated areas. Of course, this backfired, making it a rite of passage for fans to take phone photos of Danzig or the Misfits at their shows. Just know that if you’re caught taking phone photos, Danzig will physically throw down.

For Judas Priest frontman Rob Halford, it’s not the phone that’s the problem -- it’s the flash. When the Metal God punted a fans phone out of his hand earlier this year, he claimed that it was due to the brightness of the flash interfering with his performance. “The facts are we love our fans and you can film us all you like and watch our show on your phone rather than in the flesh,” said Judas Priest in a statement released after the incident. “However, if you physically interfere with The Metal God’s performance, you now know what will happen.”

At least Tom Morello is funny about his phone intolerance. Earlier this year, a fan joining the guitarist onstage tried to take a selfie with him, to which Tom responded by tossing his phone away. When people on social media tried to call him out for it, Tom responded with pretty amazing panache:

To be fair, Tom’s issues with cell phones at shows go a little deeper than most -- he believes that facial recognition software can make concerts unsafe spaces for immigrants and those with criminal records. The dude is always thinking three steps ahead.

Like Tom Morello, FIDLAR frontman Zac Carper doesn’t hate phones at his shows per se, but he isn’t going to tolerate getting a selfie taken onstage, as evidenced by him knocking this fan’s phone out of their hand when they attempted to do so. “No selfies while I’m performing,” he later posted to Reddit when asked about it. “Sorry brah. A big ole nope to that. I kindly pushed her out of the way the first time to let her know I am not down, so my instinctive reaction was to get that phone out of my face.” At least he’s real about it.

For Slipknot vocalist Corey Taylor, the issue is primarily one of texting -- and, on a larger scale, not being part of the show. In 2016, Corey knocked the phone out of the hand of a fan in the front row of a Slipknot show, later tweeting, “If you’re gonna text, stay home.” Footage of the incident later made the rounds and caused some hubbub, to which Corey responded that the fan “totally understood the fuckup” and that he and Corey “laughed about it together.” So Corey might not be terribly cruel to fans with their phones out...but he’ll let the Internet see what a rube you look like.

The next era of Slipknot is officially here! Watch the band unveil their new masks in latest video The Dying Song (Time To Sing), and get the lowdown on their seventh album The End, So Far.

Slipknot are teasing something: ‘The beginning of The End’

Get ready, Maggots: Slipknot are about to share something, with their website pointing to the times 4pm, 7pm, midnight and 1am.