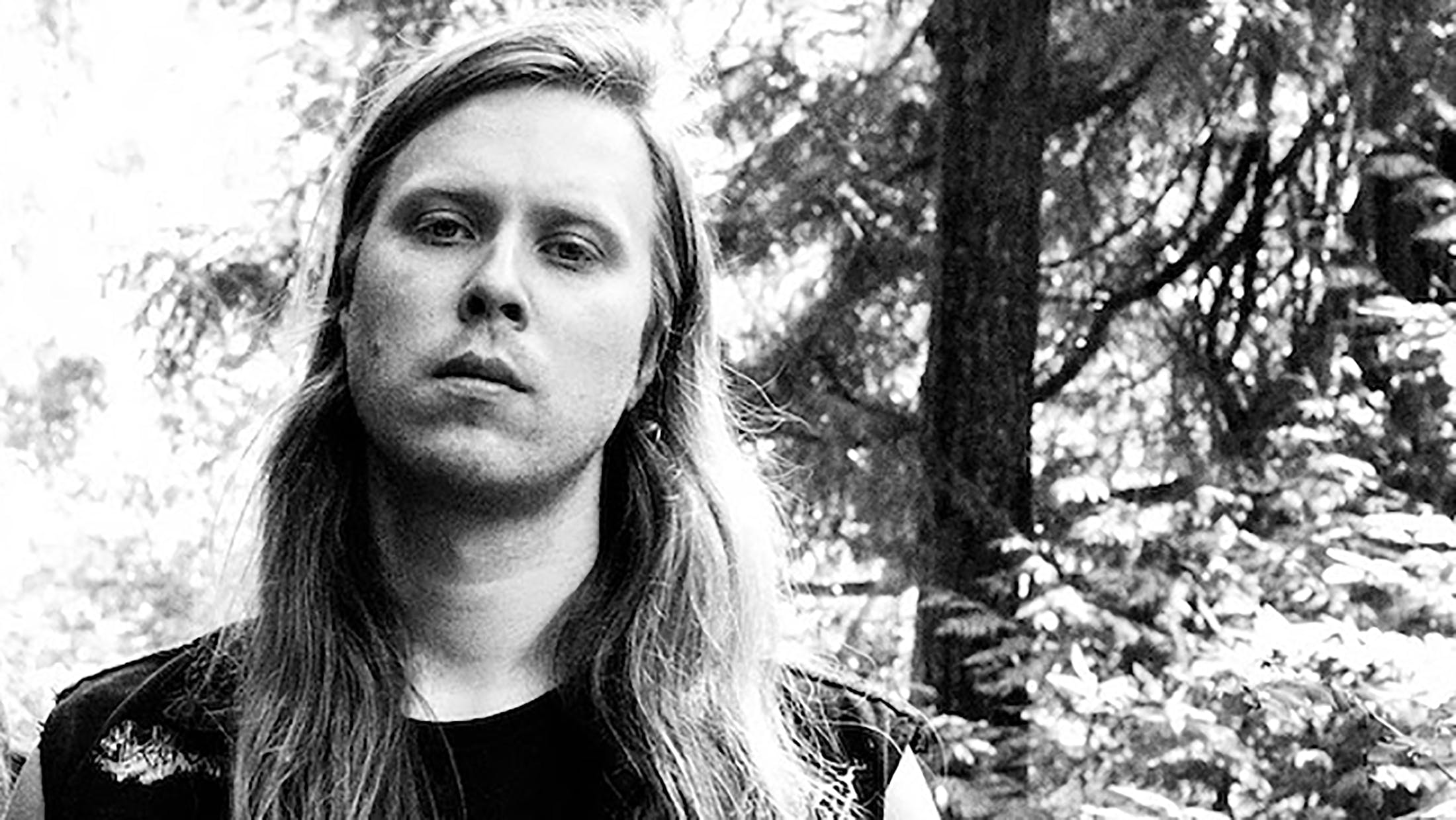 The antifascist struggle never ends, but as we introduce Dawn Ray’d frontman Simon Barr to Kerrang!’s 13 Questions we get a glance into the craziest nights, deepest fears and sentimental heart of one of UK metal’s most righteous personalities. Because who says fighting the power can’t be fun?

Why should people check out Dawn Ray’d?
“We sing about poignant things for the times we’re in. I, like everyone who listens to heavy metal, enjoy angry music. We’re angry about sincere things. This isn’t just an aesthetic, or feigned in any way. This is genuinely angry music for genuinely angry people.”

When you were a kid, what did you want to be when you grew up?
“This is a really nerdy one. My sisters used to go to a dance class in Leeds and, after he’d dropped them off, my dad would take me to walk around the Royal Armouries for an hour before he had to pick them up. There are actors or ‘historical interpreters’ who would dress up and give monologues about World War One or whatever time period they were representing. I used to think that was absolutely ace. Being a man from England, I was always fascinated with WWII because I was able to relate to the idea of being conscripted and fighting against fascism. I love the Medieval period, too, because fantasy fiction always seems to draw from that era. I know now that I’m not much of an actor, but I still love swords and weapons and stuff, which is why I incorporate them into the Dawn Ray’d imagery and the setup we bring onstage.”

What happens when we die?
“I have no reason to believe in an afterlife, although I don’t know that it doesn’t exist and I’m not the sort of person to go around arguing that there are no gods and nothing beyond. A few years ago my grandfather died. He was a big part of my life and how I got into music. Then, years later, I had this really vivid dream about going to his house and sitting with him in his living room. It was one of those dreams where you’re convinced it’s real and it stayed with me for a whole day afterwards, making me well up. Although I don’t believe it was him visiting me from another plane, I do consider that dream as perhaps the final chapter of the story of him in my life. I think the belief that the last time someone thinks of us is the point at which we really die is a profound way of looking at it.”

Where’s the best place you’ve ever been?
“KuZeB in Bremgarten. I love to visit the squats over in mainland Europe. They’re buildings that people have taken and claimed as their own: autonomous social centres run by collectives, that will sometimes put on shows and have massive rooms full of bunk beds for the bands to stay over. That’s the oldest one in Switzerland. It's this fucking cool, massive place. I’ve gotten to play there twice, and I think they were the two coolest, most chaotic shows of my entire life. I even remember at one point people wouldn’t let you down the stairs unless you crowdsurfed over them. I don’t know that it’s the best place I’ve ever been, but it’s definitely the craziest. Absolute crust chaos!”

What is the funniest rumour you’ve heard about yourself?
“There are a few going around. Like, that we used to stop shows if we saw people wearing Burzum shirts and things like that. I like to leave those as rumours, because it builds the myth. I remember really early on, though, before Dawn Ray’d we were in a screamo band called We Came Out Like Tigers where I also sang and played violin. One of our friends overheard two women at a show talking about us in the toilet saying, ‘That band were cool, but you could just tell they were really rich…” The reason why they thought that? Because I had a side-parting at the time, and an electric violin. For the record, I am not really rich!”

What is the most illegal thing you’ve ever done?
“Antifascism! My experience within antifascism is that anything worthwhile is always illegal. But I would still encourage people to get involved. Sometimes you can’t trust the state to fix a problem for you, and you’ve got to fix it for yourself.”

What is your biggest fear?
“Eco-fascism. Currently the rich deny climate change because it is inconvenient for the capitalist class. But the moment they start to acknowledge it will be the moment they start hoarding all of the resources. The core tenet of anarchism is that there is enough for anyone to live any way that they like. We produce more food than we eat. There are 10 times more empty houses than homeless people in this country. There are more than enough resources to go around. The problem is the rich hoarding resources for themselves that creates that scarcity for the rest of us, and it pits people against each other. Fascism tells you that there isn’t enough and only the worthy few should have access to the resources. The rest of us are fucked. But if we’re not careful we’re going to see a real scarcity of resources – land, food, water – and the governments will keep hold of those resources and grant them only to the few. The idea that the earth is overpopulated is the first step towards eco-fascism. Who are the excess people?! That is something that genuinely worries me every day of my life.”

How long have you worn the same underwear consecutively?
“Too long. My tour bag is basically just full of T-shirts and boxer shorts and nothing else, but there have definitely been times when I’ve miscalculated and run short. I don’t want to say a week, but that’s what my gut instinct is telling me. Fortunately, I’ve not kept track of that horrible side of myself too closely.”

Who is the most famous person in your phonebook?
“Andy Hurley from Fall Out Boy. I got to play shows with him while he was doing drums in Racetraitor. Getting to hang out with him at Black Flags Over Brooklyn was pretty mad. He’s a very impressive guy. He’s very quiet, modest, nice, and despite having played in a massive pop band for years he’s still happy to play DIY shows with much, much smaller bands in venues that are probably an awful lot less glamorous than what he’s used to.”

What is the worst job you’ve ever had?
“I’ve done loads of bar jobs and restaurant jobs, which are really hard with the long shifts. But I work in construction now and working on drainage is a fucking nightmare. I hate it. I don’t know why I’m going to tell you this story because it’s degrading to me and it won’t do Dawn Ray’d any favours, but we once had a problem with the drains getting blocked at this big cinema in Liverpool. We had to take out a toilet on the ground floor, but one of the toilets further up in the building must’ve gotten flushed. When those pipes aren’t full of water and sewage they’re full of air, and I got this blowback of air straight into my face. I reckon I’m one of the few people in the world who can honestly say that a cinema has farted into my face. That was pretty gnarly.”

If your house was on fire, what one thing would you save?
“As [political activist and writer] Emma Goldman said, everyone deserves to have beautiful things. But I’m not someone who attaches too much emotion to material items. That said, I made an electric violin for my woodwork A Level. It wasn’t actually that hard to make; it’s basically just a stick of maple wood with a pickup in it. As long as you get the measurements right, it’s not that difficult. I used it for the first few Dawn Ray’d tours all over Europe, but it wasn’t loud enough. I recently upgraded to a posh Yamaha: the YEV 104, if anyone gives a shit. That one I made is pretty cool, though, I guess – a little piece of the history of my life.”

If you had the power to turn the internet off, would you do it?
“That’s a big question. I see so much bad from the internet. The way that the far-right have massively weaponised it. Smartphones are ruining social situations. The world has become this massively different place, and a lot of it is negative. But there’s a lot of revolutionary potential through the internet, too. The fact that you can currently see riots in places from Chile to Greece, to Iraq to Hong Kong, is amazing. You see people using lasers against the police in Hong Kong and a week later the same is happening in Chile. In the end, I guess the internet is a neutral force and it depends how we use it. There are so many horrendous things, but there are benefits. Although I wouldn’t turn it off, we need to learn how to moderate our use.”

What would you like it to say on your gravestone?
“'Your only fear should be a life unlived'.”