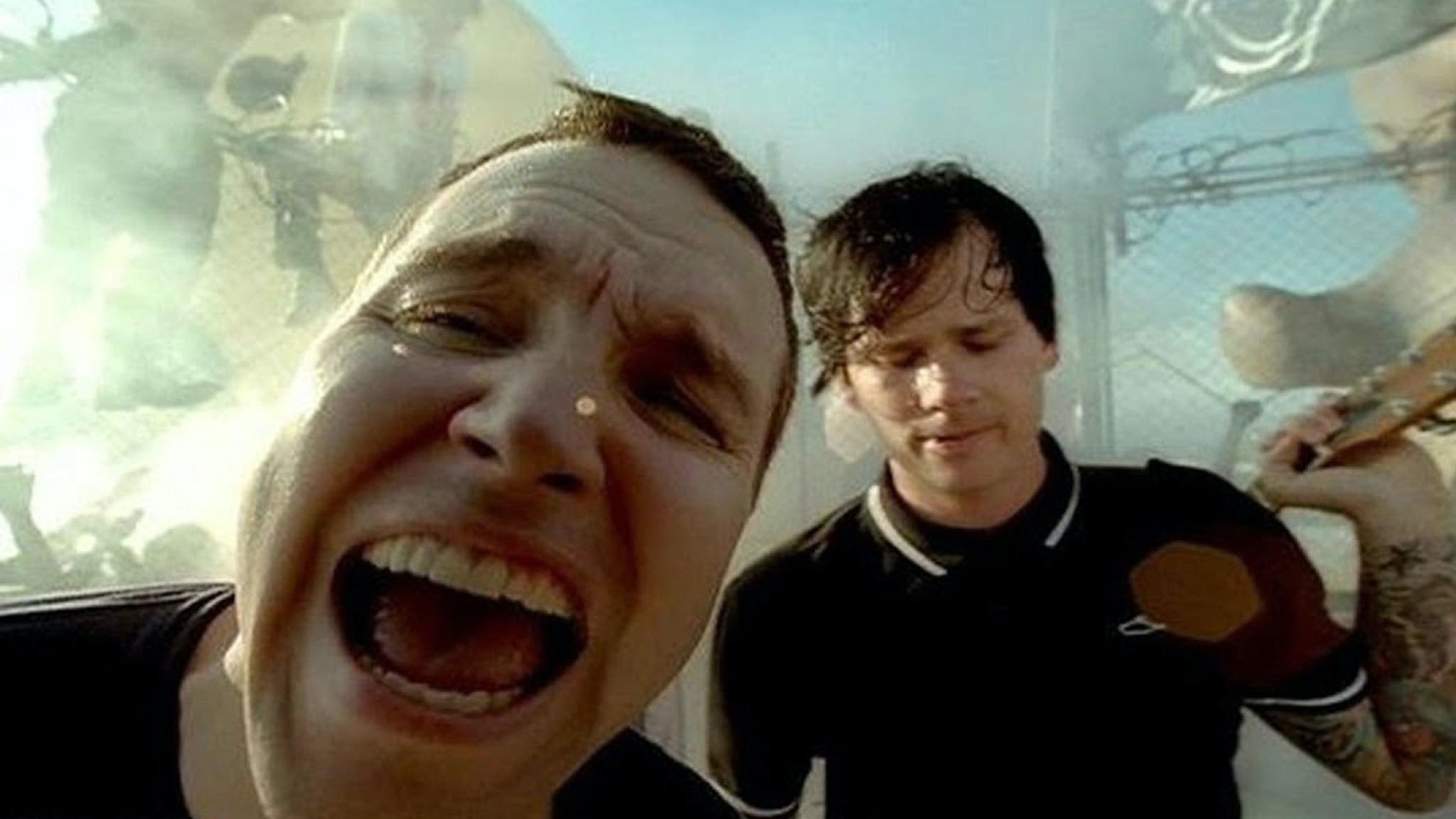 Remember when blink-182 introduced the world to their Untitled album via the first single, Feeling This?! The video is a super-stylised, over-the-top, anarchic, sexy tale of youthful rebellion, complete with oversized novelty balloons, hallway riots and unusually coloured duct tape. Let’s dive in!

0:01
We start with some young men getting their heads shaved, young men who are… not in blink-182. While the band are what incites everything else we see in the video, they’re no longer the protagonists in their own videos. It’s not like Mark, Tom and Travis were (or are) old men, but they’re that little bit too old – put them in school uniform (as the majority of people in this video are wearing) and it would all seem a little bit silly.

0:10
Travis wrote the drum intro as a homage to Led Zeppelin’s John Bonham, going for a Good Times Bad Times sound. He told Drum Magazine: “It’s like, 'Well, I want to do a four-bar drum intro and just see how it works for the song.' And we never second-guessed it. We were like, 'That sounds rad.'"

0:11
This video was directed by David LaChapelle, who is probably best known for his still photography, which is hyper-real, hyper-sexual, often incredibly expensive, funny and iconic. That famous Britney Spears Rolling Stone cover, for instance, was one of his, as was that shot of Eminem where he’s pretending a stick of dynamite is his dingus. He’s made films as well, such as the weirdly compelling hip-hop clown documentary Rize, and loads of music videos, with Christina Aguilera’s Dirrty probably his most famous (and Avril Lavigne’s I’m With You the best). He had already worked with blink when this video came along, shooting them farting about on a garbage truck.

0:15
The video was shot in a real (former) prison, the reportedly haunted Lincoln Heights Jail, which was also used for the movies LA Confidential and Nightmare On Elm Street, as well as Lady Gaga’s Telephone video. “Prison is a metaphor for school,” said David behind the scenes. “When I was growing up I had a hard time in high school. I still have nightmares about it. I wanted to do something really upbeat with crazy energy. There’s a certain age where kids just have so much energy that they’ll just go nuts and rage, and I wanted to capture that."

0:20
The line 'Get ready for action' is sampled from the 1990 film Captain America, a notorious flop made when the Marvel Cinematic Universe wasn’t even a madman’s dream. Action was also the original title for the song when it was included in Madden 2004. "Action [as a title] just sounded kind of dorky to us,” said Travis of the change. “Like, we would always call it Feeling This and then someone at our label, I think, like wrote it as 'Action' one time and sent out singles to people. And it was always supposed to be Feeling This."

0:22
There they are, the fellas themselves, up on the roof in a barbed-wire cage in front of some big pigs and a massive baby – a nod by David LaChapelle to Pink Floyd’s The Wall – in Travis’ words, “playing our fucking hearts out in hundred-degree weather”. That’s nearly 38 Celsius, which is tooooooo hot. Also worth pointing out here is the video debut of the band’s smiley-face logo, on flag form – that flag was taken by Mark at the end of the shoot, which may or may not count as theft. We can’t really work it out.

0:30
The lyrics were written separately by Mark and Tom, who went into different rooms to work on their sections and realised upon reuniting that they’d both written about sex. "It's a song about the two sides of sex," Mark told MTV News. "One side being very lustful and passionate and the other side being very romantic and loving. The verses are Tom screaming about a very lustful situation, and the chorus is a lot more romantic and a lot more poetic."

0:43
It’s a cowbell! Travis initially included it as something of a joke, but Mark and Tom liked it.

0:48
“Being in high school is weird,” said Travis. “You’re at an age where you’re independent enough and mature enough to think you can make decisions on your own, but you’re still being told what to do on a daily basis, and it really makes you mad. I think this video kinda lets people lash out and get out of that confined strict school type atmosphere, rebel and do their own thing.”

1:04
There must be – absolutely must be – hygiene risks with licking windows.

1:18
“The teachers are very authoritarian in this video,” said Mark. “When I was in high school I couldn’t wait to get out of class. I couldn’t wait for the day to be done. [I’d be] sitting there watching the clock thinking, ‘I can’t believe the second hand is moving so fucking slow.’” A nice detail: the board says “Blah. Blah. Blah. Blah. Blah” on it, an issue for Ofsted if ever there was one.

1:36
This bit was recorded by Tom standing 15 feet away from the microphone and shouting into it. The question is, would an entire album recorded in this way be (a) excellent or (b) fantastic?

1:40
Tom DeLonge drops his Hs – 'Raise your ’ands in mine' – in a way heard in a lot more British accents than American ones. There’s a genuinely fascinating look at where this came from here.

1:45
“They get all the way to the rooftop, and there’s the band: it’s their destiny” said David. Some of them have also acquired skull tattoos and hair dye. Maybe there’s a floor of shops near the top of the school.

1:58
Hey, it’s the worst possible bit for your computer to freeze on, the bit where you can guarantee an old lady will glance at your phone if you’re watching on the bus and think you are a filth-hound. “We all got very excited when David said that at one point there would be wet bras and panties,” said Tom. “Then we found out they were gonna be on girls and not us. That idea took some time to get used to. But I think, either way, wet undergarments make for a good video.”

2:11
We’re no professional prison window sex instructors, but it really feels like these two might be better off taking, like, two steps back and being able to look at each other properly – they’re getting shit-all tactile feedback from the glass and can presumably barely see one another. But hey, each to their own. In a behind-the-scenes clip, David can be heard directing the actors in a very to-the-point, hard-to-misinterpret way: “You’re humping the glass.”

2:27
Hang on: who arranged this gig? They must be kicking themselves by this point.

2:35
The teachers have been tied up with pink duct tape, which is one of the less-seen colours of duct tape. The chap on the left is also wearing a ball-gag. Like, yeah, it’s a big crazy fantasy world where metaphors are real, but that’s still false imprisonment and possibly actual bodily harm. These kids are gonna be in shiiiiit, yo.

2:51
If you freeze-frame, this guy’s boxers appear to be made by a brand called 'Balls Deep', which is rather rude. He’s having milk poured on him, which on a hot Californian day is probably briefly refreshing but an increasingly poor decision as the day wears on. In the immortal words of Ron Burgundy, it’s so damn hot. Milk was a bad choice.

2:58
The awesome outro a capella bit supposedly happened by accident, when the studio engineer accidentally forgot to fade out the vocals while fading out all the other tracks.

3:08
That’s it, that’s the end. Lovely work by everyone: a big, impressive, anarchic video for a big, frantic, ambitious track. Travis told MTV’s Making The Video upon wrapping: “I think we have an amazing video, and I think you’ll like it, and if you don’t, I hope you hurt yourself while you’re sleeping.”