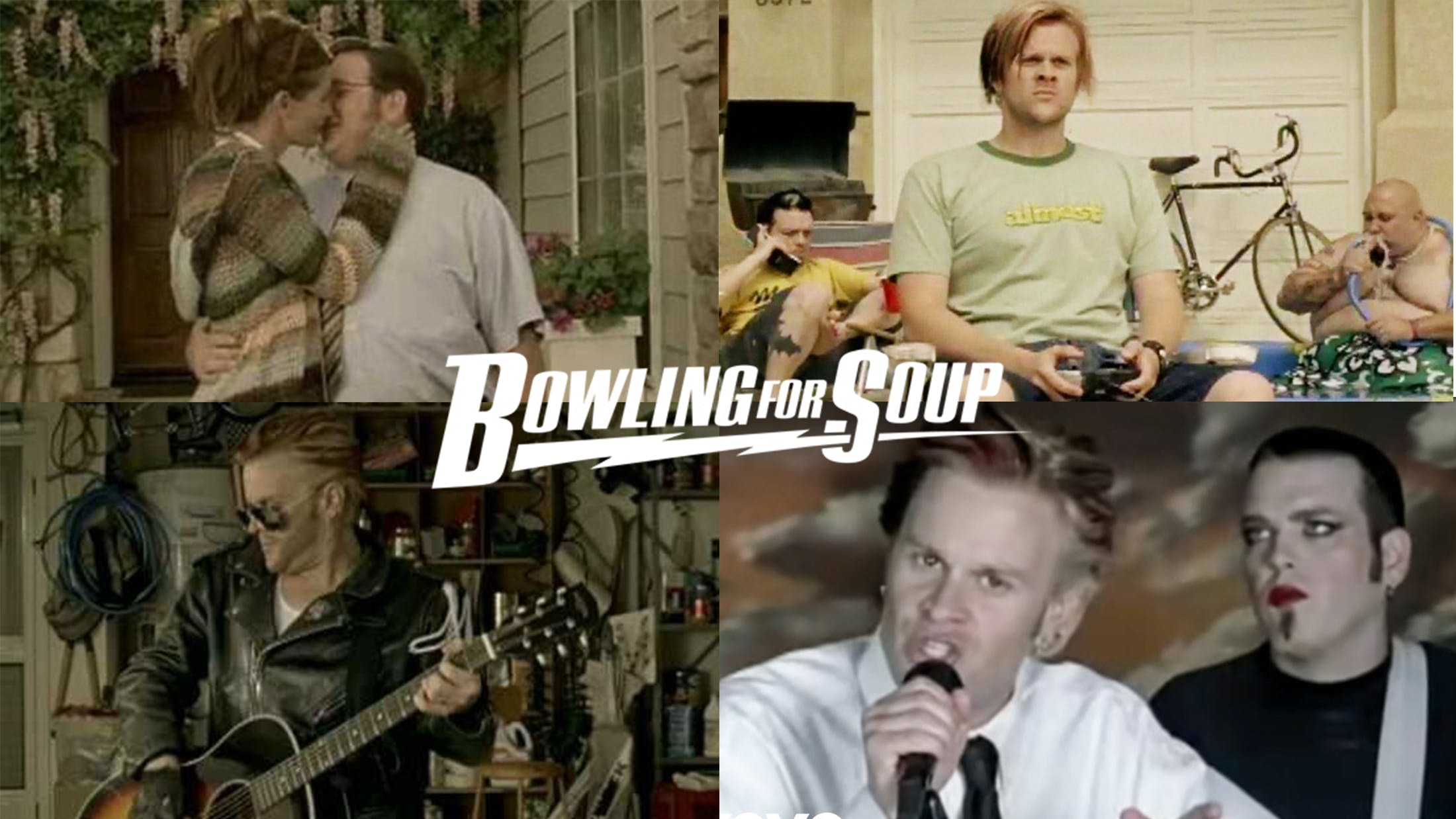 Nostalgia is a weird thing, isn’t it? When the present is less than ideal, we have a tendency to cherry-pick the best bits of the past and look back at it like it was perfect. Watch any video from the mid ‘90s on YouTube and half the comments are from kids wishing they’d been born 30 years earlier so they could hang out with Hole. Hole might not have wanted to hang out with you! Hole were busy!

The thing is, every present sucks at least a bit. Alright, the present present is apocalyptic and incredibly stressful, but at least we’ve got snazzy phones and vaccines and stuff.

0.01
A McDonald’s straw duct-taped to a remote-control car to keep the aerial up is a lovely level of detail to start off with.

0.02
Hey, it’s Bowling For Soup, look, soaking up some sun on a typical suburban American street, like thousands of others.

READ THIS: Bowling For Soup and Simple Plan have announced a tour together

0.07
The big chap lapping water from the house is guitarist Chris Burney. He has a really amazing giant beard now and looks like a tattooed Santa. Here’s a picture he posted on Instagram doing a poo.

0.19
Behind the binoculars is Jaret Reddick, Bowling For Soup frontman, and more recently, mental health advocate. Jaret opened up to Kerrang! last year about the struggles going on behind the on-stage wackiness and perpetually upbeat persona.

0.26
Prozac is an antidepressant, and a CPA is a Certified Public Accountant.

0.33
The lady from over the road is played by Joey House, an actress who had previously starred in Exit To Eden, Diary Of A Sex Addict and Fist of Honor. She now runs a high-end, appointment-only florist in Hollywood.

0.36
This chunk of the video, featuring Jaret in a shirt and tie and the rest of the band in heels, parodies Robert Palmer’s Addicted To Love video. It has also been riffed on by “Weird Al” Yankovic, Shania Twain, Stardust, Tone Loc, Shakira and Mr Blobby, as well as Bill Nighy’s character Billy Mack in Love Actually.

READ THIS: The 51 greatest pop-punk albums of all-time

0.38
Chris is wearing heels in this closeup, but when seen in a long shot is performing just in his tights. Why? Dunno. One comment on YouTube claims he broke his shoes between shots, but it isn’t substantiated in any way.

0.42
Shaking an ass on the hood of Whitesnake’s car is a reference to the video for Here I Go Again, in which actress Tawny Kitaen (who Joey House looks a lot like) writhes around on a Jaguar XJ driven by lead singer David Coverdale. Coverdale and Kitaen were later married, but divorced in 1991.

0.44
Drummer Gary Wiseman, whose lipstick game is completely on point here, is not to be confused with Gary Wiseman, Norfolk commercial property agent.

READ THIS: Bowling For Soup reimagine Girl All The Bad Guys Want for 2019

0.53
Bassist Erik Chandler’s mirthless glare is very reminiscent of the bored-to-death blank expressions sported by the models in the original Robert Palmer video. Erik and Jaret used to perform acoustic Bowling For Soup shows as Jaret & Erik, touring Britain almost every year for 15 years or so. Earlier this year, Erik left the band entirely, for personal reasons.

1.01
This bystander looking at Bowling For Soup with contempt is Mitch Allan, lead singer of SR-71 (best known for their 2000 debut single, Right Now) and writer of the original version of this song, which came out on a Japan-only SR-71 album. Mitch and Jaret had some friends in common, and when Mitch was told the song sounded like it was by Bowling For Soup, he got in touch. Bowling For Soup were putting the finishing touches on their album A Hangover You Don’t Deserve when the song came in. “We were just like, This is a great song. We don't really know that it's going to be a single, but it is great. We might as well just do it. So we went back in the next day and we cut it” Jaret told Songfacts. They rewrote some of the lyrics and changed the bridge, and that was that.

1.11
The scale of the garage door makes no sense as it slides down there, but let’s not worry about that too much, shall we?

1.30
Bowling For Soup have referenced Limp Bizkit before, of course, in the video for Girl All The Bad Guys Want.

READ THIS: Bowling For Soup's Jaret Reddick talks about his mental health

1.34
The directors of this video, Smith n’ Borin (aka Ryan Smith and Frank Borin), have also made videos for Duran Duran. Small world. They’ve also worked with Xzibit, Good Charlotte, Cypress Hill and A Simple Plan, as well as making most of Bowling For Soup’s videos.

1.49
This section is a parody of the video for Faith by George Michael, as excellently covered by Limp Bizkit (them again!). Jared does a very good job of Michael’s snake-hipped dancing.

1.55
The leather jacket is pretty much identical to George Michael’s as well – well done, art department!

2.21
A little bit of Mötley Crüe-adjacent showing off, now. Bowling For Soup grew up as big fans of the band, along with Quiet Riot and Ratt.

3.12
The song’s over, with just enough time left for a bit of applause and an always-welcome reminder that writhing looks silly without music. Hooray!