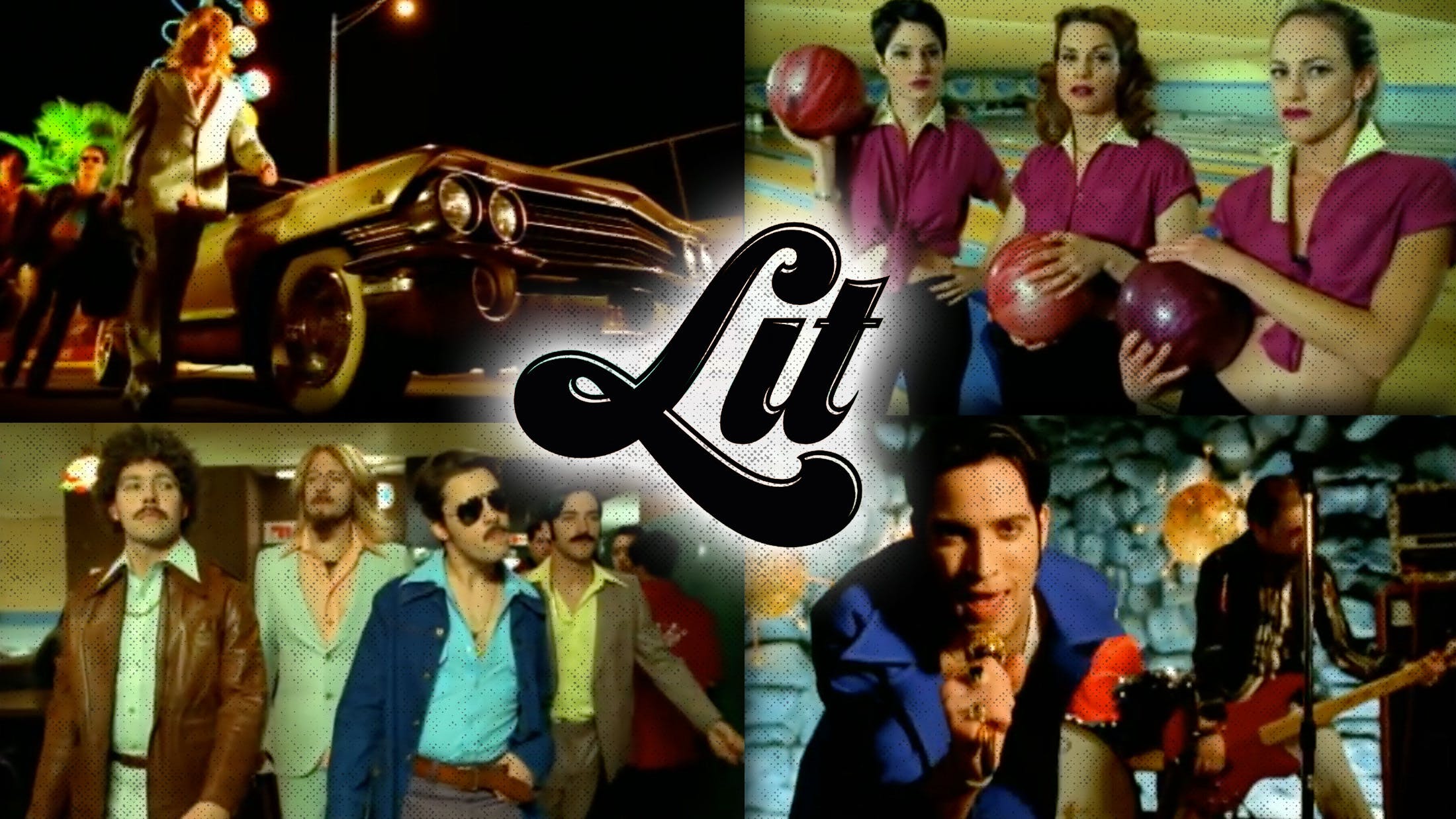 Oh no! There’s an emergency! You’ve just found out the club you fraudulently and ill-advisedly purchased has got poisonous spikes in its walls that come out every night at midnight, and it’s 11:59 and the place is packed with drunk people leaning everywhere! What can you do?

You chuck on a guaranteed floor-filler, of course, and they don’t come much more guaranteed than 1999’s catchy-as-hell self-sabotage anthem My Own Worst Enemy, by bowling shoe enthusiasts Lit.

This is a long one, partly due to a confusing turn of events that led us to briefly think the lead singer had married a blood relative, so let’s dive right in!

0.01
The boot of a car opens, and look, it’s some dudes. Dudes in sketchy wigs and non-contemporary suits.

0.09
They’re all carrying bowling-ball bags (tricky hyphen placement, there) and that’s a lovely-looking car, but what’s going on? Surely this isn’t the young (in 1999), handsome band Lit?

0.13
Riiiight, they’re doing the “dressed like it’s the 1970s” thing. It’s a fun thing to do, which lots of bands have had a big laugh with over the years. Beastie Boys, blink-182, Foo Fighters… There’s something a bit different about this one, though, something we’ll return to later, probably at excessive length.

0.14
Lit have straddled a few genres in their time – they started out leaning in a grungier direction before embracing pop-punk and power-pop in their most famous days, and in more recent years they have gone for a country-rock sound. One thing for sure, though, is that guitarist Jeremy Popoff’s chain, which sports a foot-long braided beard, is pure motherfucking nu-metal.

0.22
It’s a good intro, isn’t it? The band themselves weren’t convinced it was a hit after writing it on a big pissed sesh. “We had a rented warehouse space in an industrial park in Anaheim and we turned it into a rock’n’roll man-cave clubhouse,” says Jeremy Popoff. “We would take turns buying 12-packs of Natural Light [an extremely cheap, nasty, diarrhoea-inducing lager rated as the worst widely available beer in the world by RateBeer] and we’d write and practice all night. We wrote it pretty fast. We liked it but we were unsure, and kind of self-conscious about it because our buddy T-Bone didn’t think it was cool.” Needless to say, they like it now, with Jeremy Popoff saying, “When I think of those iconic intro riffs like Start Me Up, Back In Black, Money For Nothing, Smoke On The Water, Walk This Way – it’s crazy to know that we are members of that club."

0.32
Here’s A. Jay Popoff, devilishly handsome lead singer and younger brother of ol’ lengthy-beard. There’s something going on with the colour of the gold microphone, the angle of the camera and the angle of his hand that means it keeps looking like he doesn’t actually have a microphone, and is just singing into his fist. It’s fun!

0.40
The song’s lyrics are a collection of drunken misadventures, mainly courtesy of the Popoff brothers. Jeremy described it to Spin in 1999 as “the result of waking up and realising you screwed up the night before. The first verse is about screwing up with your chick. A. Jay's the king of having four ex-girlfriends show up to the same show. It's funny watching him try to juggle."

0.43
There’s something weird, isn’t there? Like, they’re doing the big silly 1970s thing while also wearing retro-looking clothes in the non-fancy dress bits. It’s like going, 'Ha, imagine dressing like people from the past! Stupid assholes!' but at the same time going, 'Yeah, I like 1950s influenced clothes and spend a lot on vintage footwear.' It’s a bit odd.

0.52
Bassist Kevin Baldes is still in Lit, but is also an accomplished portrait photographer.

0.55
Drummer Allan Shellenberger tragically died in 2009, aged just 39, leaving behind a young daughter. He had a malignant glioma, a brain tumour which reached the point of being inoperable. Following his death, the band put out a statement that said: "To know Al was to know laughter," the band said in a statement. "He had a heart of gold and would do anything for anyone. Words cannot begin to express how much he will be missed. This was our brother and not a day will go by that we won't think about him.” Also, that leopard-print bowling ball is rad.

1.02
'I’m sleeping with my clothes on', sings A. Jay, a man known for disrobing frequently. He supposedly laid down the vocal track for this song in the nude, and had a habit, when drinking Jagermeister, of leaving as little as possible to the imagination. Not that singing about his mistakes taught him anything, of course – in November 1999, nine months after this song came out, A. Jay was arrested for indecent exposure onstage at a concert on North Carolina. According to MTV, he supposedly “dropped his pants but not his drawers, but did inadvertently reveal his manhood in the process.” He put out a statement that read: “In the midst of some rock and roll shenanigans, I guess things kind of got a little out of hand.”

1.35
Bit of air guitar from A. Jay there. Lit’s hometown of Fullerton, Orange County, California has a pretty good musical track record (haha, both ‘track’ and ‘record’ are music words, ha ha). Gwen Stefani went to high school there. The Adolescents and Social Distortion played some of their first gigs there. Berlin (of Take My Breath Away fame formed there. And, maybe most impressively of all, Leo Fender developed the Stratocaster and Telecaster in his Fullerton plant, leading it to be nicknamed “the birthplace of the electric guitar”.

1.55
That is very good lower-lip acting from Baldes.

1.56
Once the jacket comes off it’s all even weirder. There’s just an imbalance between, 'Ha ha, look, we’re dressed silly' and 'Look how handsome and muscular I am,' that sits strangely. Like, the Sabotage video doesn’t intersperse the Beastie Boys’ 70s-inspired antics with lingering closeups of their biceps.

2.12
Earlier this year, A. Jay got married in Las Vegas. His new wife, Ande Jo Popoff (nee Stone), a hair colouring specialist, is sort of also called A.J Popoff, so that’s got to be confusing. Nonetheless, enormous congratulations to the Popoffs, an extremely happy-looking, fine-looking pair.

Hang on, though, something deeply confusing is going on. Ande Jo has run Sissy Pop salon in La Habra, California, since 2018. According to their Facebook bio, she runs it with her sister… Lauren Popoff.

So hang on, what the fuck’s going on? How come Lauren’s called Popoff too? If Ande Jo’s sister had the surname Popoff, presumably Ande Jo was called that as well, so did A. Jay Popoff get married not just to another A.J., but to another A.J. Popoff?

How common a surname could Popoff possibly be? Common enough that, in this interview with Jeremy Popoff, the interviewer’s daughter has a best friend with the surname.

But then, looking at Jeremy’s Instagram post from the wedding, he refers to Ande Jo as “a new Popoff”. And here she’s referred to before the wedding as Ande Jo Stone.

How’s her sister called Lauren Popoff then? Hang on… Is she married to Jeremy? Oh. Yeah, it’s probably that, isn’t it, A. Jay meeting his brother’s wife’s sister and fancying her and it going from there.

Probably only an idiot would have spent an entire afternoon trying to figure that out, drawing diagrams, briefly entertaining quite unsavoury theories and looking up what the California marriage laws were after getting confused enough to think a brother and sister may have wed one another. Only a total idiot probably. Hmmm…

2.16
Best shot in the video, there, the ball-cleaning one. Glorious stuff. Also, on the topic of cleaning, before Lit were called Lit they were called Stain. Before that, Razzle. The Stain-Lit name-change came because someone else was releasing music under the name Stain, and demanded $5,000.

2.21
Nine times out of 10 you could say that was definitely a stunt double shot – the old 'professional dancer viewed only from the back' thing. It’s tricky to say in this case though – like, it’s probably a dancer wearing A. Jay Popoff’s clothes and doubling for him, but if so, they’ve done an amazing job on the tattoos. Also the dude is in pretty great shape, it doesn’t seem out of the question he can bust a sick worm. WE MAY NEVER KNOW.

2.28
It totally looks like he doesn’t have a microphone!

2.37
Baldes (on the right) being the 'acting as a gross dude' MVP again. All about that lower lip. It’s really good.

2.54
So, like, as a story, what’s actually happened here? Some poorly-dressed bowlers have gone bowling, then gone into a Lit concert happening in the back room, and that’s the end. Fair enough.

3.05
That is a fucking amazing jump. They should have done a video where it was just A. Jay Popoff jumping. Look at that – that’s proper Cirque Du Soleil standard.