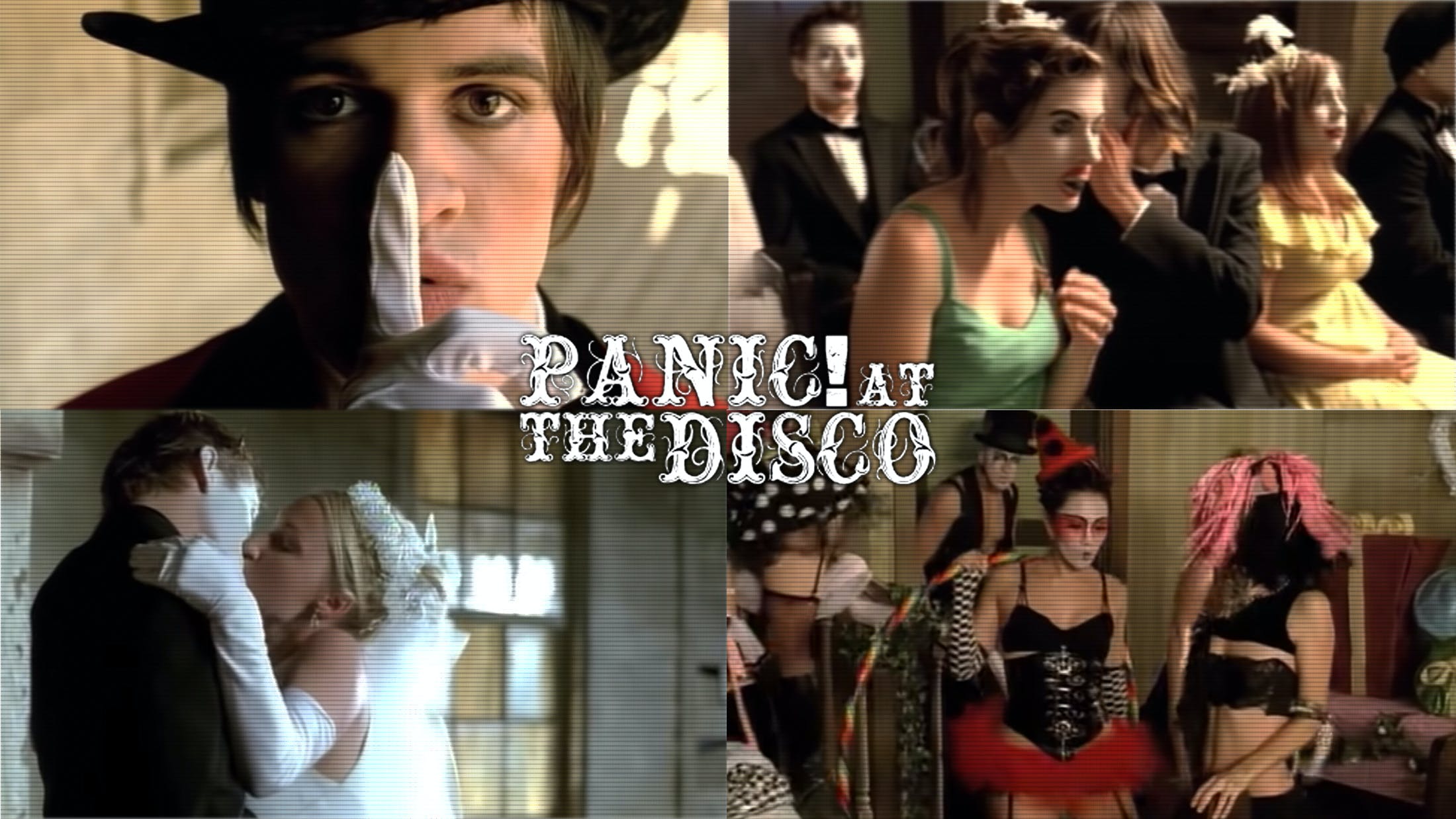 You know what not enough music videos have? Ringmasters! As luck would have it, Panic! At The Disco were aware of this when putting together their video for I Write Sins Not Tragedies for the kajillion-selling debut album A Fever You Can’t Sweat Out. It’s probably one of the best ringmaster-centric videos ever made!

So let’s dive on in!

0.01
Immediately there’s something a bit different going on here. Plucked cello strings, a wedding invitation and a big-ass feather? It’s all a lot more dramatic and theatrical than a lot of what other bands were doing at the time.

0.19
Urie is doing his own echo, there, one of many incidences of Panic! putting more words into a space than you might reasonably expect anyone to.

0.23
There’s something odd about this lot that it takes a little while to properly put your finger on.

0.33
'Whore' isn’t a nice way to refer to someone. The seeds of this song supposedly come from a breakup that lyricist Ryan Ross went through, and him subsequently thinking how much worse it could have been if the relationship had gone further before all going wrong. However, a few years ago, Urie wrote a bit about the song that seemed like part of it had come from his life: “I had this friend, Eric—we were really good friends and he knew I was really into this girl and she and I had been talking for a while. I was smitten over this girl. And I was slow at making a move because I was just so nervous. Next thing I heard: they were fucking. And that just broke my heart.” Kind of seems like Eric is the dick in that story, tbh, and chucking words like 'whore' around is probably uncalled for.

0.34
Worth noting: Urie opens a door here, significant in a video in which closing goddamn doors is repeatedly requested. Also worth noting: look at how pleasant Brendon Urie’s face is.

0.38
Yeah, that bit should be 'closing the god damn door'. A reasonable amount of people think this song is called Closing The God Damn Door. The actual title comes from a book by Douglas Coupland, best known for his books Generation X and Microserfs. In his novel Shampoo Planet, the lead character Tyler writes, "I am writing a list of tragic character flaws on my dollar bills with a felt pen. I am thinking of the people in my universe and distilling for each of these people the one flaw in their character that will be their downfall – the flaw that will be their undoing. What I write are not sins; I write tragedies." Coupland has taken inspiration in the other direction – his novel Girlfriend In A Coma takes its name from a Smiths song. There are other literary references on on A Fever You Can’t Sweat Out – The Only Difference Between Martyrdom And Suicide Is Press Coverage comes from Chuck Palahniuk’s novel Survivor.

0.40
The erstwhile rest of Panic! are behind Urie. They’ve had a fairly tumultuous history, with Urie now the sole surviving founding member. The full ins and outs of what happened are really long and involve a lot of one person saying one thing and another saying another, with some ambiguity over whether some former members played on certain records or didn’t, and credit for the origin stories behind some songs a bit in-betweensy in terms of people, like the Ryan/Brendan/“Eric” tale above. Whatever happened subsequently, they have one of the jammiest origin stories in music, getting signed to Pete Wentz’s Decaydance label before ever playing a live show on the strength of two songs posted to his LiveJournal. Early adopters, man. But kudos to Wentz for going, 'You know what’ll make loads of people millions of dollars? Five dudes dressed like Victorians, one of whom plays the fucking accordion, who have never played a show before!'

0.42
These circus performers are members of the Lucent Dossier Experience, a surreal, avant-garde troupe of musicians and acrobats beloved by the kind of dudes that spend £300 on a leather top hat with big-ass rings on it. The idea came out of what would have been a drinking session between the band and director Shane Drake had the band been old enough to drink. Drake told MTV: "The whole idea came to me like a lightning bolt, and I turned to the band and said, 'Here it is: We're going to do a wedding where the bride's side is made up of creepy, face-painted people, and the groom's side is all carnival vaudeville freaks. And Brendon plays the part of the groom's subconscious. They all sort of looked at me, so I said, 'Look, it's got stilts, brides crying and infidelity. It's perfect.' And they were totally sold. Then I got even more trashed and pitched it to the label." As luck would have it, Drake had a friend of a friend who was in the Lucent Dossier Experience, and that was that.

0.58
Playing a cello in this way is known as pizzicatto. This particular cello is being plucked by session cellist and composer Heather Stebbins.

1.00
Daniel Isaac McGuffey, who plays the groom here, was a former intern for director Shane Drake, who said, “I feel bad for Daniel, because now people are constantly stopping him and asking him if he's in Panic! At The Disco, and he gets all this fan mail written by little girls who think he's in the band. It really got annoying, and so to get away from it all, he took a job working at the Cheesecake Factory or someplace like that." McGuffey was a competitor on the fifth season of U.S. MasterChef.

1.08
The bride is played by Jessie Preston, who there isn’t a lot of information online about. There is, however, a tattoo artist in Montreal called Jessi Preston, without the E, who recently did a big-ass tattoo of a unicorn on a dude where his willy becomes the unicorn’s willy that kind of has to be seen to be believed.

1.33
So many words! Panic! At The Disco were never the favourite band of people with limited word counts – whether consciously or unconsciously, this first generation of internet bands went a bit nutso with long song titles. Journalists with space for 100 words were in a real pickle with 15-word titles (the mid-name exclamation mark is also sometimes very annoying to write, but Kerrang! is hardly in a position to complain). Urie later told Billboard: “We saw that Fall Out Boy had a couple song titles that were really long. We were like, ‘Oh, that’s fun.’ We started doing it. Bands like Name Taken and a lot of the bands in the scene were doing cool stuff like that, so we took it a step further. Nobody had song titles that were as long as ours.” A Fever You Can’t Sweat Out included the tracks The Only Difference Between Martyrdom And Suicide Is Press Coverage, Lying Is The Most Fun A Girl Can Have Without Taking Her Clothes Off and There's A Good Reason These Tables Are Numbered Honey, You Just Haven't Thought Of It Yet.

1.42
The whole video was shot in one day, which is really impressive given the sheer amount of shit going on – presumably circus performers are pretty good at doing their own makeup and stuff like that, which would be a timesaver. It was shot in a farmhouse in Santa Clarita, California, that had previously been used as a location in Rob Zombie’s gorefest The Devil’s Rejects. However, in a non-Californian twist, it was freezing – fine for band members in baroque three-piece suits, less so for half-naked circus performers.

1.48
Some of the circus performers used a fairly tried-and-tested yet medically inadvisable method for keeping warm: the beer jacket. "It's difficult to catch in the video — and even I didn't realise it until we were done filming — but half of the bride's side of the wedding is completely drunk in the video,” director Drake told MTV. “They snuck flasks in and were drinking to stay warm. I would've been pretty pissed at them if I'd known. I found out later that one of them almost threw up on my wife."

2.03
'Poise and rationality', with a kind of double meaning if heard as “poison rationality”, is just not the kind of verbiage one expects from a band of actual children. Being able to match catchy-ass tunes, really compelling theatricality, a unique image and weirdly intricate, world-weary lyrics while too young to buy a Kronenbourg is pretty flippin’ impressive.

2.19
This is one of enormous pop star Taylor Swift’s favourite songs. In 2019, she wrote about it: "When I hear I Write Sins Not Tragedies by Panic! At The Disco, I'm transported back to being 16 and driving down the streets of Hendersonville, Tennessee, with my best friend Abigail, euphorically screaming the lyrics." Swift recruited Urie to write with her, resulting in the song Me!, which ended up as, among other things, the quickest music video to ever reach 100 million views.

2.36
Imagine really feeling like shit but also being surrounded by clowns. Unthinkable.

2.48
YouTube ruins the video from this point onwards with pop-up nonsense, but Urie’s role as the groom’s subconscious is revealed – it’s now the groom wearing that badass ringmaster gear.

3.04
And with a tipped hat and some brief but impressive sub zero circussing, there we are. A justified winner of the Best Video award at the MTV Video Music Awards, a star-making turn from Urie and instant global superstars. Not bad for a day of pratting about in a chilly barn!